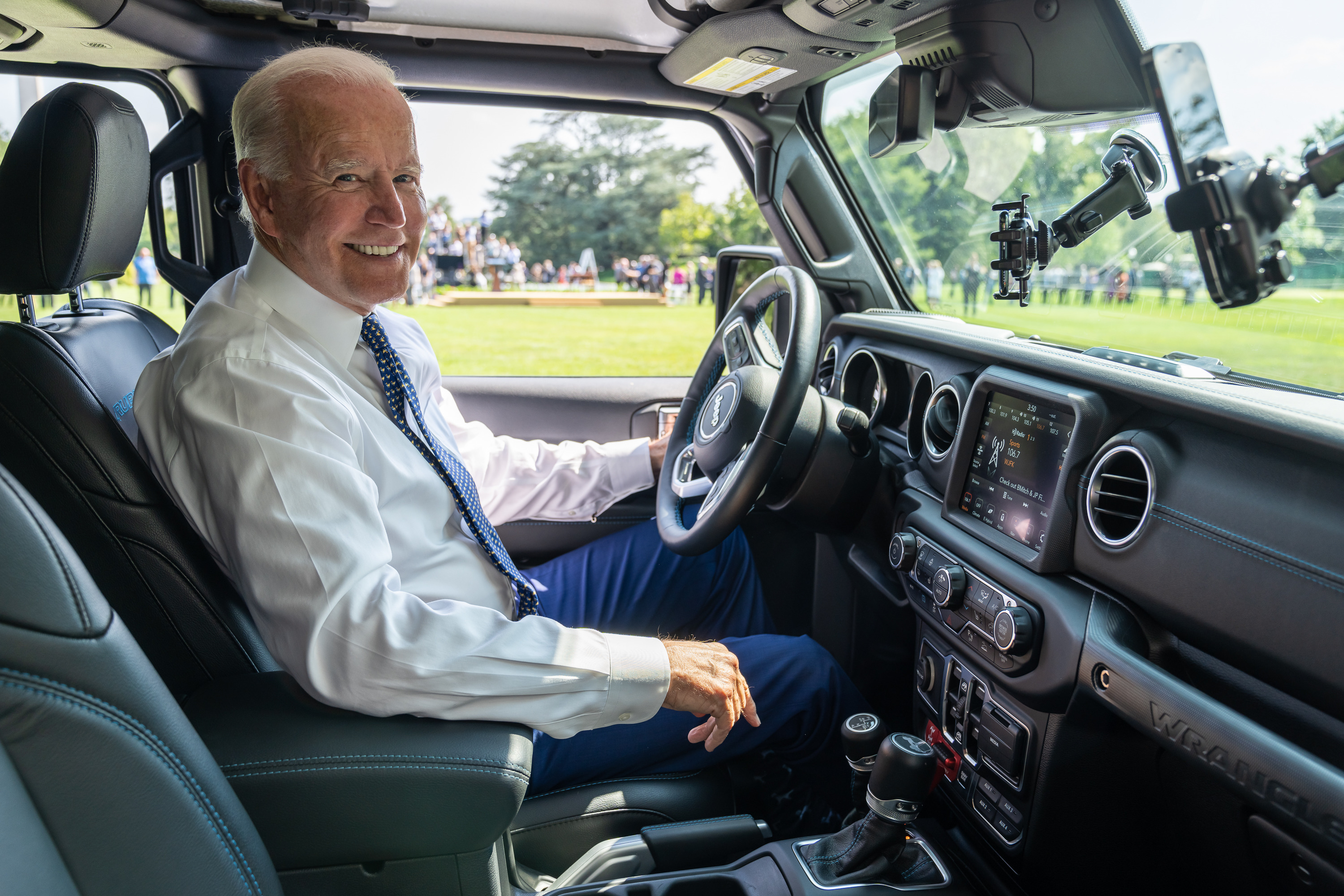 Donald Trump put out a statement saying that if “we don’t solve the Presidential Election Fraud of 2020” — which he falsely claims to have “thoroughly and conclusively documented” — then “Republicans will not be voting in ‘22 or ‘24.”

He added: “It is the single most important thing for Republicans to do.”With this threat, Trump puts the entire Republican party into a tough spot: Either join him in questioning election legitimacy or suffer his wrath.

Brilliant strategy, Cotton, let’s see how this plays out. For once, I completely agree with the former guy.

“The Biden administration announced on Wednesday a plan to develop large-scale wind farms along nearly the entire coastline of the United States, the first long-term strategy from the government to produce electricity from offshore turbines,” the New York Times reports.

“The announcement came months after the Biden administration approved the nation’s first commercial offshore wind farm off the coast of Martha’s Vineyard in Massachusetts and began reviewing a dozen other potential offshore wind projects along the East Coast. On the West Coast, the administration has approved opening up two areas off the shores of Central and Northern California for commercial wind power development.”

“Taken together, the actions represent the most forceful push ever by federal government to promote offshore wind development.”

“The congressional committee investigating the Jan. 6 riot at the Capitol on Wednesday subpoenaed a former Justice Department lawyer who played a key role in then-President Donald Trump’s effort to overturn the 2020 election,” NBC News reports.

“The subpoena seeks sworn testimony and records from Jeffrey Clark, the former acting head of the Justice Department’s civil division, by Oct. 29.”

Punchbowl News: “It was the latest move in an accelerating probe by the select committee.”

“Trump ally Steve Bannon failed to show up for a deposition before the Jan. 6 select committee on Thursday, paving the way for the House panel to seek criminal charges against him for defying a congressional subpoena,”  Axios  reports.

“It’s the first major test for how the committee will respond to witnesses’ refusal to cooperate, an obstacle that stalled countless Democratic investigations during the Trump era by triggering protracted legal battles.”

“The outlook for the global economy darkened as a stream of data from Europe and Asia suggested growth faltered in the third quarter, hobbled by world-wide supply-chain snarls, sharply accelerating inflation and the impact of the highly contagious Delta variant,” the Wall Street Journal reports.

“Jobless claims fell below 300,000 last week for the first time since the Covid-19 pandemic began in 2020, a sign companies are holding tightly to their workers amid strong demand for labor,” the Wall Street Journal reports.

Also on the video call was Sen. Joe Manchin (D-WV), who told the group that a $2 trillion top line for the bill is not a good starting point.

Punchbowl News: “We got a note this morning from a source close to the White House — someone who would be in position to know the Biden administration’s private thinking — that was meant as a warning shot to Democratic moderates and progressives on Capitol Hill bickering over the multi-trillion dollar legislation. The message is that it’s time to reach a compromise on the reconciliation package and send it to President Joe Biden — ASAP.”

“We’ve pointed this out before, but Democrats truly are nowhere when it comes to finishing this reconciliation package. The ‘serious progress’ that has been made is not really evident to us, or to the lawmakers involved.”

Jonathan Bernstein: “Presidents do have some options in such circumstances. They can generate media coverage for almost anything they want. They can persuade members of Congress to pay attention to something. They also have a variety of stuff they can attempt to exchange for votes — appointments, executive actions that help a district or a state, publicity for a given lawmaker, and so on.”

“But what presidents can’t do is order any member of Congress to agree. They can’t even enforce deadlines. And while applying pressure to reach a deal can help, it can also backfire. Publicity might generate pressure to compromise, but if lawmakers don’t hear from constituents, they may learn that the president is safe to ignore. High-profile negotiations and deadlines might force an issue, but can also make any impasse harder to break.”

“Democrats are deciding whether to cut entire programs or reduce their timeframes — or some combination of both — to cut the proposal’s $3.5 trillion price tag and appease centrists.”

“Sen. Kyrsten Sinema, the moderate Arizona Democrat who has objected to the size and scope of President Biden’s sweeping legislative agenda, has been trailed all over the country by progressive activists seeking to pressure her. They have followed her into a bathroom in Arizona, on an airplane and even to the Boston Marathon,” the New York Times reports.

“But this week, with the Senate out of session, those activists would have had to travel even farther to press their case with Ms. Sinema in person — she’s in Europe on a fund-raising trip.”

“Democrats still face the same roadblock to enacting it: the filibuster.”

The Transportation Security Administration says 40% of its workforce, including screeners, remain unvaccinated against Covid-19 as the November 22 deadline looms, CNN reports.

A new Morning Consult poll finds President Biden’s net approval rating is down 16 percentage points among unvaccinated Black voters since September 8, the day before he issued the vaccine mandates.

“We tend to think of pandemics and epidemics as episodic. But we are living in the Covid-19 era, not the Covid-19 crisis. There will be a lot of changes that are substantial and persistent. We won’t look back and say, ‘That was a terrible time, but it’s over.’ We will be dealing with many of the ramifications of Covid-19 for decades, for decades.”  — Allan Brandt, a historian of science and medicine at Harvard University, quoted by the New York Times.

Wall Street Journal: “The stretch of higher inflation—which many economists now expect to linger—is weighing on policy decisions at the Federal Reserve and starting to have a broader impact on the overall cost of living, wages and social benefits programs.”

“The Social Security Administration said on Wednesday that higher inflation would trigger a 5.9% increase for Social Security benefits that seniors and other Americans receive, the largest increase in nearly 40 years. It also will increase Social Security taxes for high-wage workers. Last week, the Labor Department said employers increased wages in September by 4.6% compared with a year ago, a pickup from previous months.”

Nicholas Eberstadt: “In theory, it should be perfectly possible for a modern society not only to maintain prosperity but to increase it steadily in the face of pervasive population aging and demo­graphic stagnation or depopulation. Whether the United States can in practice continue to flourish in the face of such trends is another question. The formula by which the U.S. ascended to its current status of the world’s wealthiest society and sole superpower was predicated on over two centuries of continuous and exceptional population growth, unique among Western countries in tempo and scale.”

“But that old familiar formula is in trouble today. It is no longer clear that the U.S. can count on indefinite geometric population growth to power its way into the future. Sooner or later, continuing American population growth of any kind may not be in the cards, either.”

“The State Department plans to resume regular evacuation flights from Afghanistan before the end of the year to help U.S. citizens, residents and some visa applicants leave the country,” the Wall Street Journal reports.

“The small number of U.S. citizens and thousands of Afghans left behind after the chaotic evacuation effort in the final weeks of the U.S. presence in Afghanistan could be eligible for seats on the U.S.-sponsored flights.”

“Former President Donald Trump must sit for a videotaped deposition next week as part of a lawsuit involving his anti-immigrant rhetoric,” ABC News reports.  “A group of Mexican protesters said they were assaulted during a rally outside Trump Tower in September 2015 over the then-candidate’s comments that Mexican immigrants were criminals and rapists.”

Rep. Bennie Thompson (D-MS), the chairman of the House select committee investigating the Jan. 6 attack on the Capitol, would not rule out subpoenaing former President Trump, The Hill reports.

Alaska state Sen. Lora Reinbold (R), who was banned from flying on Alaska Airlines for refusing to wear a mask, and therefore unable to travel to and from the state capital, has now tested positive for the coronavirus, the Washington Post reports.

Said Reinbold, in a Facebook post: “It’s my turn to battle Covid head on… game on! Who do you think is going to win? When I defeat it, I will tell you my recipe.”

Anchorage Daily News: “Reached by text message, Reinbold said she is resting and improving quickly using a variety of products, including vitamins, a Vicks steamer and the antiparasitic medication ivermectin.”

CNN: “In a wide-ranging interview, the senior liberal justice expressed caution about some of the ideas raised before the presidential commission studying the Supreme Court, asserted the importance of people accepting rulings they dislike, and insisted that despite the discord seen recently in opinions, the justices get along.”

“Breyer’s message has been something of a tough sell, as the nation has grown more polarized and the high court itself has been increasingly riven along political lines. Some critics regard his view as too idealized for the current tumultuous climate.”

The United States and Israel said they are exploring a “Plan B” for dealing with Iran if the Islamic Republic does not return in good faith to negotiations to salvage the languishing landmark 2015 nuclear deal, the AP reports.