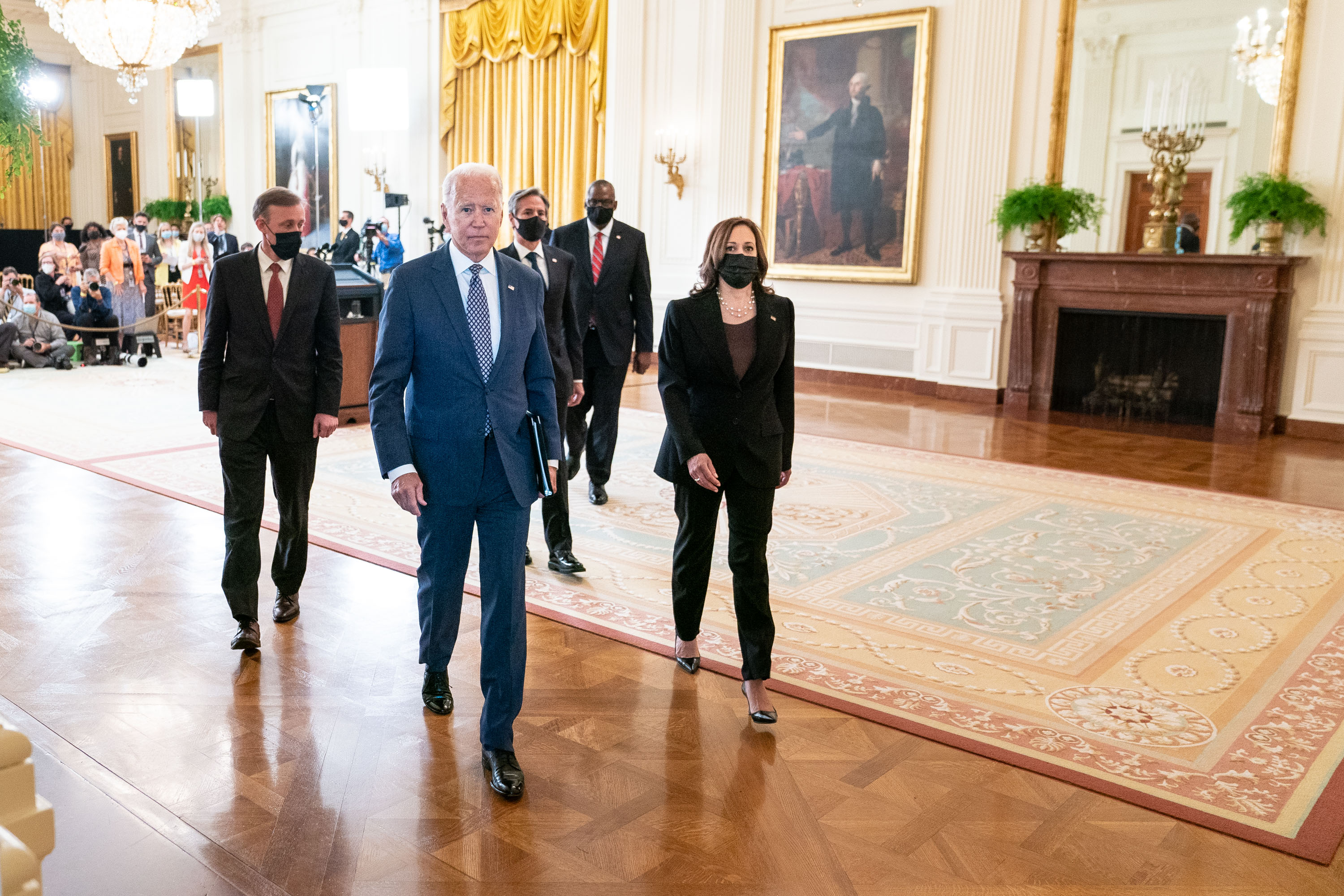 “But let’s just be abundantly clear Democrats are nowhere right now. They do have a window to strike a deal over the next few weeks, but can they make it happen? That’s the huge question hanging over Washington right now.”

“Negotiations between the White House, Pelosi and Schumer haven’t resulted in a ‘topline’ spending number yet, and it’s not clear when that will happen. No one in the House or Senate leadership could give us any timetable on Tuesday other than to say they were ‘working on it.’ Without that compromise, the rest of the multi-trillion dollar reconciliation package can’t be finished. And House Democrats can’t pass the $1 trillion bipartisan infrastructure bill already approved by the Senate, a critical issue for Biden that Democrats outside the Beltway are begging for right now.”

Politico: “Privately, some Democrats fear that the sprawling reconciliation bill could spill over into the December of hell, when the party will also need to pass a trillion-dollar government spending bill and avoid a debt crisis.”

Said Jayapal: “Democrats should not be negotiating against themselves.”

While Sen. Joe Manchin has been willing to discuss his priorities in detail with his colleagues in the Senate, Sen. Kyrsten Sinema only negotiates with the White House, Politico reports.

Said Sinema to on Democratic senator; “I’m not going to share with you or with Schumer or with Pelosi. I have already told the White House what I am willing to do and what I’m not willing to do. I’m not mysterious. It’s not that I can’t make up my mind. I communicated it to them in detail. They just don’t like what they’re hearing.”

Sen. Bernie Sanders (I-VT) writes for Fox News that delays in passing the budget reconciliation bill are due to intense lobbying from the pharmaceutical, health insurance and fossil fuel industries.And perhaps more significant, Sanders still refers to the legislation as a $3.5 trillion bill.

Please watch this video: Jennifer Jenkins, a member of the school board in Brevard, Florida, detailed the threats and intimidation made against her, her family, and her neighbors during the debate over pandemic restrictions in schools.

“The Port of Los Angeles will begin operating around the clock as the White House pushes to clear supply chain bottlenecks threatening the holiday shopping season and slowing the country’s economic recovery from the global pandemic,” the Los Angeles Times reports.

“The supply crisis, driven in part by the global COVID-19 pandemic, not only threatens to dampen U.S. spending at a critical time, it also poses a political risk for President Joe Biden.”

“Inflation accelerated in September, with consumer price pressures across America showing no sign of easing ahead of the all-important holiday shopping season,” CBS News reports.

“Consumer prices increased 5.4% from the year-ago period, slightly faster than their 5.3% increase the previous month. Core inflation — which strips out volatile food and energy costs — grew 4.0%, the same as in August.”

“West Texas Intermediate crude closed above $80 a barrel for the first time since late 2014 as a growing power crisis from Europe to Asia boosts demand for oil ahead of winter,” Bloomberg reports.

New York Times: “The comparison between today and the 1970s seems to break down with the ‘stag’ component of stagflation… By almost every measure, economic growth is expected to be remarkably strong this year… But predictions for growth are being dialed back.”

“The backlash Senate Minority Leader Mitch McConnell received from fellow Republican senators last week is a wake-up call to the GOP leader that he doesn’t have any more political capital to spend on helping Democrats raise the debt limit again, say GOP aides and strategists,” The Hill reports.

“McConnell is still secure in his position as Senate Republican leader, despite regular attacks from former President Trump, who has called for him to be replaced.”

“Yet at the same time, Senate Republican aides and strategists say McConnell’s reputation took a hit last week when he agreed to a two-month increase of the debt ceiling after saying for weeks that Republicans wouldn’t help Democrats on the issue.”

“The White House told governors to start preparing to vaccinate children as young as 5 by early next month in anticipation of clearance of Pfizer’s Covid vaccine for the age group in the coming weeks,” NBC News reports.

“The Biden administration has purchased 65 million pediatric doses of the Pfizer/BioNTech vaccine, enough to vaccinate the estimated 28 million children who would be eligible should the Food and Drug Administration approve Pfizer’s request to vaccinate children ages 5 to 11.”

The Biden administration will open up U.S. land borders with Canada and Mexico to non-essential travel starting in November — but only to those fully vaccinated against COVID-19, Axios reports.

A new study finds that vaccination cuts the risk of dying or being hospitalized with Covid-19 by over 90 percent.  The effectiveness was similar for the Pfizer/BioNTech, Moderna and Oxford/AstraZeneca vaccines, and did not diminish during the five-month period of the study.

“The number of people quitting their jobs has surged to record highs, pushed by a combination of factors that include Americans sensing ample opportunity and better pay elsewhere,” the Washington Post reports.

“Some 4.3 million people quit jobs in August — about 2.9 percent of the workforce, according to new data released Tuesday from the Labor Department. Those numbers are up from the previous record, set in April, of about 4 million people quitting, reflecting how the pandemic has continued to jolt workers’ mind-set about their jobs and their lives.”

“The phenomenon is being driven in part by workers who are less willing to endure inconvenient hours and poor compensation, who are quitting instead to find better opportunities.”

Rep. Liz Cheney (R-WY) told Reuters that the House Select Committee investigating the deadly Jan. 6 riot at the Capitol will move criminal contempt charges against those who do not comply with its subpoenas.

“The House select committee investigating the Jan. 6 attack on the Capitol is planning to ramp up its efforts to force Trump administration officials to comply with its subpoenas as the former president attempts to stymie the inquiry,” the Washington Post reports.

“Lawmakers who sit on the panel said they are prepared to pursue criminal charges against witnesses like Stephen Bannon who have balked at cooperating. And the committee may issue a subpoena as early as Wednesday to Jeffrey Clark, a Trump Justice Department official who sought to deploy department resources to support former president Donald Trump’s false claims of massive voting fraud in the 2020 election.”

Said Rep. Adam Schiff (D-CA): “We are completely of one mind that if people refuse to respond to questions without justification that we will hold them in criminal contempt and refer them to the Justice Department.”

“The report cites Perry more than three dozen times and includes details about his phone call with the No. 2 official at the Justice Department and an email Perry sent afterward with alleged evidence of fraud.”

Rep. Claudia Tenney (R-NY) — who scratched out a 109-vote recount win earlier this year in one of the tightest House races in the nation — has spent tens of thousands of campaign dollars on businesses where she held an ownership stake or an executive job, and from which she reported $130,120 in income in 2020, the Daily Beast reports.

“California will outlaw the sale of new gas-powered lawn mowers, leaf blowers and chain saws as early as 2024 under a new law signed by Gov. Gavin Newsom,” the Los Angeles Times reports.

“The law requires all newly sold small-motor equipment primarily used for landscaping to be zero-emission — essentially to be battery-operated or plug-in — by that target date or as soon as the California Air Resources Board determined it is feasible. New portable gas-powered generators also must be zero-emission by 2028, which also could be delayed at the discretion of the state agency.”

“More than a month after a frenzied U.S. effort to evacuate thousands facing retribution from the Taliban in Afghanistan, members of Congress are still quietly pushing the government to help extract a small group of stranded Afghans who are direct relatives of American military service members,” the New York Times reports.

“The Afghan interpreter who in 2008 was part of a team that rescued then-Sen. Joe Biden when his helicopter got caught in a blinding snowstorm in Afghanistan safely left the country with his family last week,” the Washington Post reports.

“The interpreter, Aman Khalili, had been in hiding in the weeks after Kabul’s fall to the Taliban in mid-August and the U.S. withdrawal from the country. Khalili, his wife and several of his children — a number he did not want to disclose for safety reasons — were rescued last week in a joint effort by a group of Arizona military veterans, aid organizations and, ultimately, the Department of State.”

A new study finds that the number of lynching victims in a Southern county is a positive and significant predictor of Confederate memorializations in that county.

“This finding provides concrete, quantitative, and historically and geographically situated evidence consistent with the position that Confederate memorializations reflect a racist history, one marred by intentions to terrorize and intimidate Black Americans in response to Black progress.”