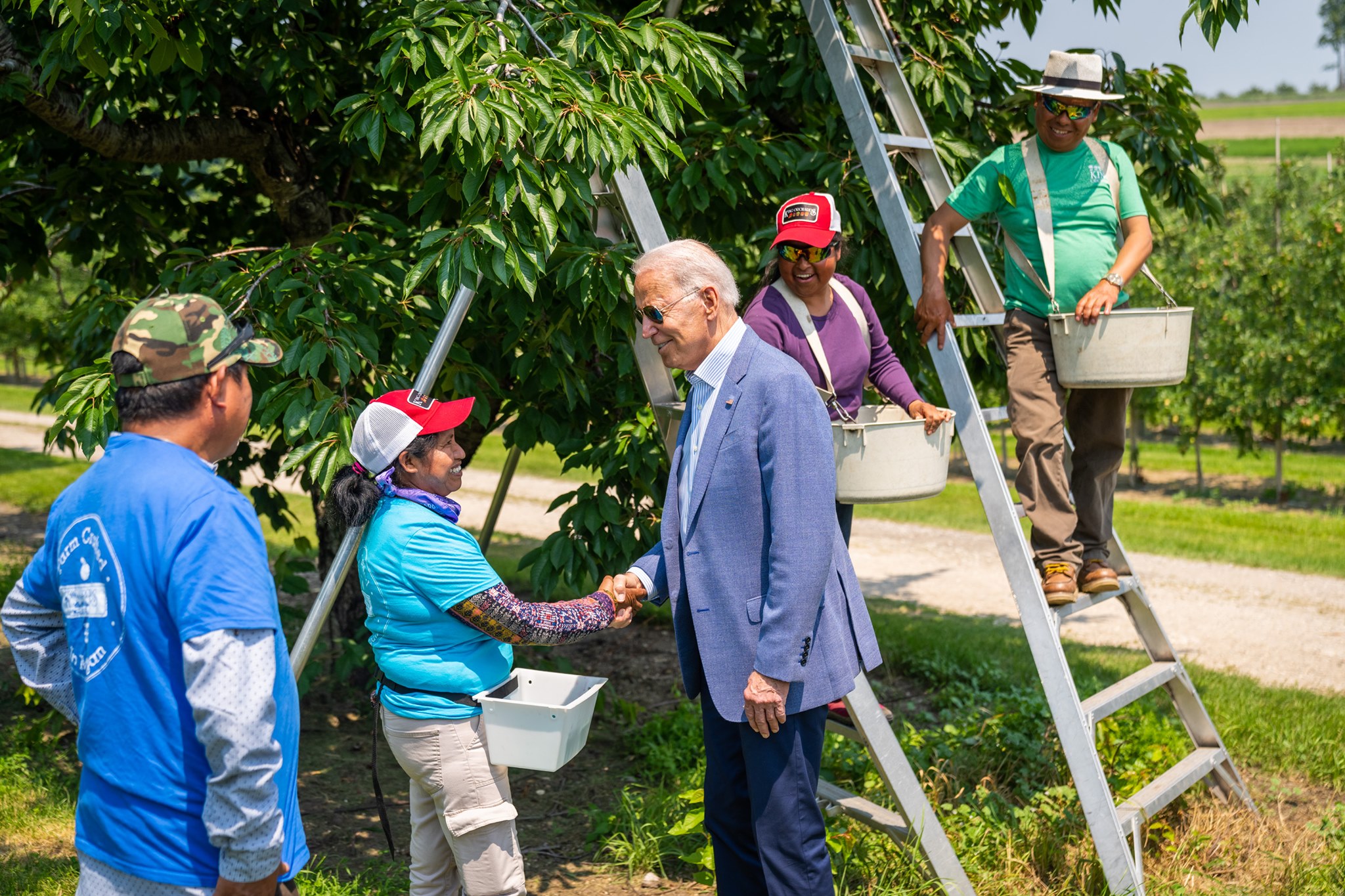 “McAuliffe, the Democratic candidate for Virginia governor, on Tuesday called on leaders in Washington from both parties — including President Joe Biden — to ‘get their act together,’ while pushing Senate Democrats to scrap the filibuster if needed to enact the party’s priorities on infrastructure spending and voting rights,” the AP reports.

McAuliffe is also getting assistance from his allies at Everytown for Gun Safety, which just launched a new ad starring Newport News Sheriff Gabe Morgan, who praises the former governor’s support for law enforcement. Politico reports the ad “is part of Everytown’s $1.8 million investment in the Virginia election.” McAuliffe additionally has a new spot of his own, slamming Republican Glenn Youngkin for opposing abortion rights.

Nathaniel Rakich: “House retirements are one metric we’re watching to give us a clue as to how the 2022 midterms will unfold, but on the surface at least, it doesn’t look like either party has an advantage in this regard: 10 Democrats are retiring compared with nine Republicans.”

“However, when you dig into the specific reasons that are likely behind each retirement, it does look like Democrats are more worried than Republicans.”

Ross Douthat: “One problem with the emergency thinking that Trump inspires in his opponents — and one reason to resist it — is that it occludes real understanding of the political conditions that put him in power, and that might do so again.”

“This is what you saw happen to the Democrats after 2016: The sense of being lightning-struck sent the center-left wandering into a maze of conspiracies, a haunted wood where villains like Vladimir Putin and Mark Zuckerberg loomed larger than the swing voters they had lost and savior figures like Robert Mueller were supposed to unmake Trump’s power for them.”

“Only the party’s left, its Bernie Sanders wing, fully developed a more normal theory of the 2016 defeat, trying to understand Obama-Trump voters in the context of globalization and deindustrialization as well as racism, fascism and Putinist dirty tricks.”

“Nine months after the attack on the US Capitol, Republicans in Congress are defending Donald Trump’s role on January 6 in some of their strongest terms yet — and signaling he’d have widespread backing from the party if he ran for president again in 2024,” CNN reports.

“Republicans from across the conference — including some who are vulnerable in next year’s midterms or have long been seen as part of the establishment wing of the party — are expressing little to no reservations about the prospect of Trump topping the ticket again, even as he continues to spread the same election lies that led a mob to storm their place of work. Some GOP members are cheering on a Trump comeback, saying he remains a popular figure and powerful force in the party. And there’s widespread agreement among Republicans that Trump would be the automatic frontrunner — and freeze the primary field — if he chooses to jump in.”

“Sen. Chuck Grassley’s (R-IA) enthusiastic appearance at a Trump event in Iowa over the weekend shows that the former president has further strengthened his grip on the GOP following the Jan. 6 attack on the Capitol,” The Hill reports.

“The Iowa senator’s eagerness to stand next to former President Trump at a boisterous rally in Des Moines only days after Trump repeatedly trashed Senate Minority Leader Mitch McConnell (R-KY) — a friend and ally of Grassley’s — served as a wakeup call to some Republicans that Trump is back and very much in charge of the party.”

BUT… “Senate Republicans, with a few exceptions, are hoping that former President Trump does not announce his intention to run again for president,” The Hill reports.

“These GOP senators definitely don’t want to see Trump announce a bid before the 2022 midterm elections, fearing that could sink their hopes of winning back the Senate.”

WEST VIRGINIA REDISTRICTING — Separate Senate and House committees in West Virginia’s Republican-run legislature each advanced a new congressional map on Tuesday, producing very similar plans that, barring a retirement, will pit two Republican incumbents against one another because the state is losing a seat due to reapportionment.

Both proposals split the state more or less horizontally across its midsection, creating a northern 1st District that includes the hometowns and geographic bases of Reps. David McKinley and Alex Mooney; the state’s third Republican member, Carol Miller, would be left to her own devices in the southern seat. The two maps differ only slightly, with the Senate placing Ritchie County in the 2nd District and Pendleton County in the 1st; the House map simply swaps the two.

A north-south divide had long made the most sense geographically, though Politico’s Ally Mutnik reported on Tuesday—before the House took action—that McKinley had been “pushing a competing plan” that would instead double-bunk Mooney with Miller. Unnamed GOP operatives told Mutnik that McKinley’s alternative had “been gaining some traction,” but unless there’s a last-minute change of heart, that does not appear to have been the case.

In April, all three members released a joint statement saying, “At this time, we plan to seek re-election,” but added that after redistricting, they would “consider the issue again at that time.” According to Mutnik’s paraphrase, a Mooney spokesman said on Monday—again, before the latest action on the new maps—that the congressman “is absolutely running” for another term, while Miller said, “I am 100 percent running for re-election.” McKinley doesn’t appear to have revisited the matter, though, and he sounded noncommittal in remarks he made to Mutnick earlier this year.

Both committees also approved maps for their respective chambers. The state House of Delegates will see the biggest changes, due to a 2018 law mandating that its multi-member districts be replaced with constituencies that will elect just one member each. Currently, 47 of the House’s 67 districts are single-member seats, while the rest elect anywhere from two to five delegates, or 53 members in total. Going forward, all 100 delegates will be elected from individual districts.

“It demonstrates Trump and his allies are mobilizing together to punish the handful of Republicans who voted to impeach him after the Jan. 6 Capitol riot.”

“Rep. Liz Cheney’s House reelection campaign enjoyed its second-biggest fundraising quarter ever this summer… The donations came on the heels of Cheney’s all-time fundraising record, which occurred one quarter earlier,” the Casper Star Tribune reports. “Cheney’s campaign raised just over $1.7 million during the third quarter, which runs from July to September.”

NEVADA U.S. SENATOR / GOVERNOR — While Republican state Sen. Ben Kieckhefer didn’t rule out running for Senate or governor back in April, he’s almost certainly out of the running now that he’s resigned from the legislature to accept an appointment from Democratic Gov. Steve Sisolak to the Nevada Gaming Commission.

PENNSYLVANIA GOVERNOR / U.S. SENATOR — Republican Rep. Dan Meuser, who’d been considering a campaign for governor (and reportedly looking at Pennsylvania’s Senate race as well), said on Tuesday that he’d seek re-election to the House. In May, Meuser said he’d make up his mind about a gubernatorial bid in four to six weeks, which, well, is not how things played out.

NEW YORK GOVERNOR — For the first time, state Attorney General Tish James has uttered the words “I’m considering” in regard to next year’s race for governor, though of course she’s telegraphed her interest for months. James did not, however, offer a timetable for making a decision.

If she does get in, though, she’d start off as an underdog in the Democratic primary against Gov. Kathy Hochul, according to a new poll from Marist College. In a hypothetical three-way matchup including New York City Public Advocate Jumaane Williams, Hochul would take 44%, James 28%, and Williams 15%, with just 13% undecided. Williams has not yet kicked off a run but has promised he’d make an announcement about his plans this month.

FLORIDA GOVERNOR — Politico reports that state Sen. Annette Taddeo, who’s been considering a bid since February, will enter the Democratic primary for governor “this month.”

MAINE GOVERNOR — State Senate President Troy Jackson has rebuked a union-backed PAC that’s been trying to push him to run against Gov. Janet Mills in next year’s primary, and according to Jackson’s spokesperson, he’s directly informed the group’s leaders that he’s not running. Last month, Jackson issued a statement expressing support for Mills when former GOP Gov. Paul LePage kicked off his comeback bid.

ALASKA U.S. SENATOR — The Alaska Department of Public Safety has fined Republican Senate candidate Kelly Tshibaka $270 for “commercial fishing without a commercial fishing crew license,” following the release of a July campaign video that showed her retrieving fish from a net and selling them to a tender boat. Officials declined to charge Tshibaka over a separate 2019 incident in which she obtained a sport fishing license reserved only for those who’ve lived in the state for 12 months, at a time when Tshibaka had only recently returned from living in Maryland.

Tshibaka is challenging Republican Sen. Lisa Murkowski, with the endorsement of Donald Trump. Democrats have yet land a notable candidate, though state Sen. Elvi Gray-Jackson has said she’s considering a bid. Physician Al Gross, who ran as an independent last year with the support of state Democrats, has also said he’s thinking about a second run, though he recently lost a campaign to serve on the hospital board in his home town of Petersburg.