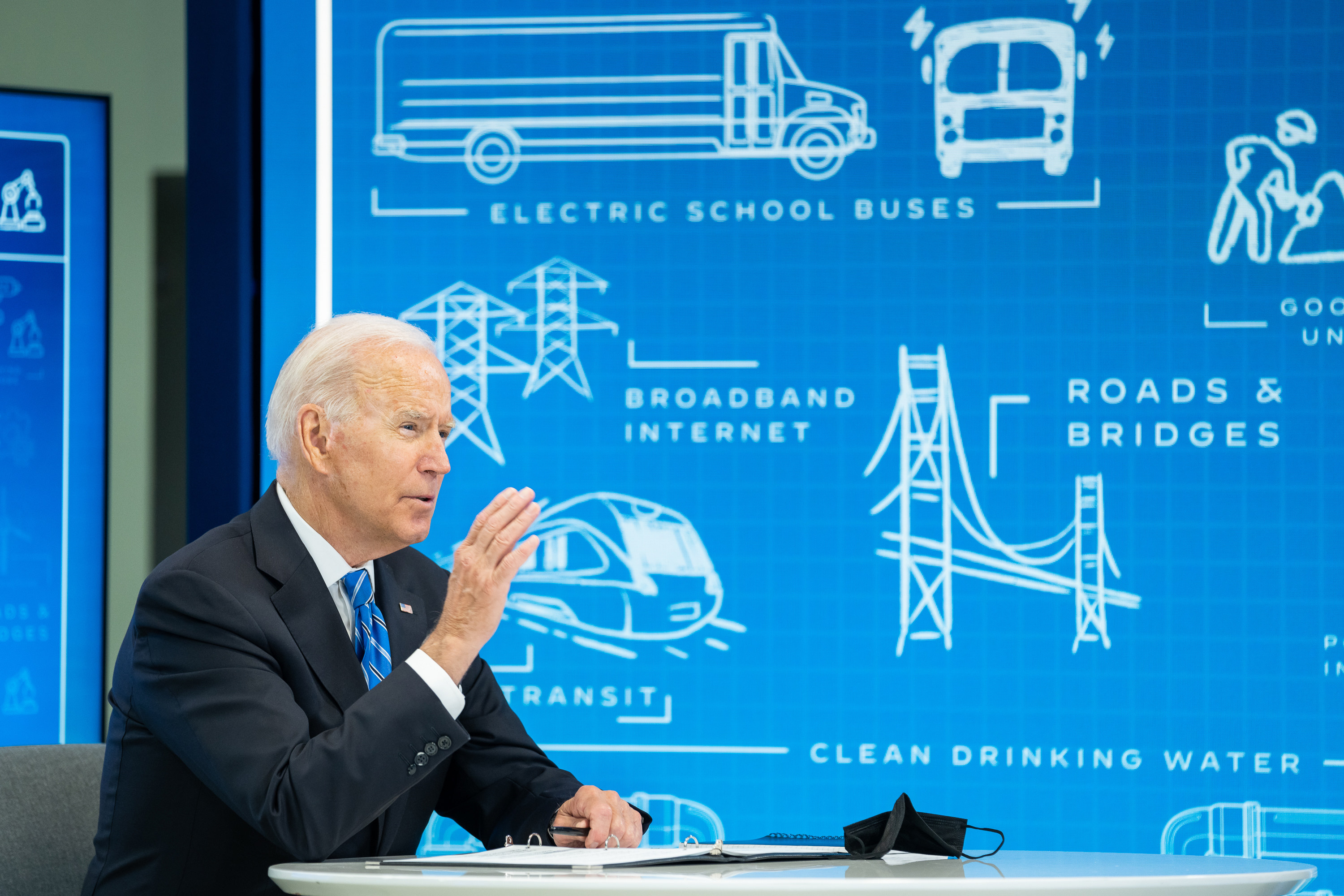 Punchbowl News: “Speaker Nancy Pelosi has begun to address how she’ll handle some of the vexing decisions she will have to make in the coming days about the shape of the reconciliation bill.”

Said Pelosi in a letter: “Overwhelmingly, the guidance I am receiving from Members is to do fewer things well so that we can still have a transformative impact on families in the workplace and responsibly address the climate crisis: a Build Back Better agenda for jobs and the planet For The Children!”

“Democrats have several paths given the reality of having to shrink their reconciliation package from $3.5 trillion to the roughly $2 trillion level: more programs for less money, meaning shorter duration; fewer programs for more money; or just a mix and mash of both. Pelosi here is coming down in favor of the ‘do fewer things well’ argument, which means there will be programs on the cutting room floor.”

Playbook: “That might seem mundane, but it’s not. Progressives have been pushing for leaders to adopt their whole wishlist of proposals from universal Pre-K and free college to dental and vision for Medicare — and cut the price tag by having them expire in a few years’ time. The idea, they argue, is to set up a bunch of mini cliffs and dare Republicans to let popular programs expire.”

“With the governor of Texas leading the charge, conservative Republicans in several states are moving to block or undercut President Joe Biden’s COVID-19 vaccine mandates for private employers before the regulations are even issued,” the AP reports.

“The growing battle over what some see as overreach by the federal government is firing up a segment of the Republican Party base, even though many large employers have already decided on their own to require their workers to get the shot.”

“The dustup will almost certainly end up in court since GOP attorneys general in nearly half of the states have vowed to sue once the rule is unveiled.”

The Hill: “American Airlines and Southwest Airlines will continue to require COVID-19 vaccinations for their employees as required by the Biden administration, defying Texas Gov. Greg Abbott’s (R) executive order banning all vaccine mandates in the state.”

A new Kaiser Family Foundation poll finds 71% of unvaccinated respondents said the need for boosters indicated that the Covid-19 vaccines were not working.

“The House is scheduled to pass a short-term increase in the debt ceiling Tuesday to enable the Treasury to continue borrowing money to pay the bills for two months,” NBC News reports.

“The measure, the product of a last-minute deal struck in the Senate, offers only a temporary reprieve, and it is likely to set up another round of fighting in December.”

Speaker Nancy Pelosi suggested that the Treasury Department should be able to lift the debt ceiling on its own and that Congress would then have the power to overrule it, Punchbowl News reports.

Said Pelosi: “That seems to have some appeal to both sides of the aisle because of the consequences to people for not lifting it.”

Associated Press: “Though few doubt that Congress will again extend the government’s borrowing authority when it expires in December, no one seems certain of how they’ll do it. Democrats don’t have the votes yet to enact President Joe Biden’s top priorities into law. And Republicans are nervous that Democrats may weaken the filibuster rule that lets the Senate’s minority party derail legislation.”

“Miscalculate and there could be a calamitous federal default, a collapse of Biden’s domestic agenda and, for good measure, a damaging government shutdown. Stir in lawmakers whose nerves are already frayed and are looking to tee up issues for next year’s midterm elections, and it’s a recipe for confrontations that could damage each party if leaders aren’t careful.”

Rep. Adam Schiff (D-CA) confirmed to MSNBC that witnesses defying subpoenas from the House panel investigating the January 6 insurrection at the Capitol will be criminally prosecuted and charged with contempt of Congress.

Said Schiff: “If witnesses do not show up, we will hold them in criminal contempt.”

Rep. Adam Schiff (D-CA) referred to House Minority Leader Kevin McCarthy (R-CA) as an “insurrectionist in a suit and tie,” as he slammed the House Republican leader for having “absolutely no reverence for the truth,” CNN reports.

Said Schiff: “Unlike those people climbing outside the building, they knew it was a lie. The true believers were out there attacking the building. But inside the chamber, my Republican colleagues know it is a big lie.”

“The Biden administration urged the courts again to step in and suspend a new Texas law that has banned most abortions since early September, as clinics hundreds of miles away remain busy with Texas patients making long journeys to get care,” the AP reports.

The Atlantic: The post-Roe Abortion option no one knows about.

New York Times: “The Supreme Court heard arguments in an abortion case on Tuesday, but the issue for the justices was a procedural one: Could Kentucky’s attorney general, a Republican, defend a state abortion law when the governor, a Democrat, refused to pursue further appeals after a federal appeals court struck down the law?”

“As the argument progressed through a thicket of technical issues, a majority of the justices seemed inclined to say yes.”

Politico: “Revenues jumped 18 percent in the fiscal year that just ended, analysts say — the biggest one-year increase since 1977. That translates into $627 billion more than in 2020, according to the nonpartisan Congressional Budget Office, which estimates that, for the first time, total government revenues topped $4 trillion.”

This could possibly help push the debt ceiling deadline into January.

New York Times: “More than 460 American law enforcement officers have died from Covid-19 infections tied to their work since the start of the pandemic, making the coronavirus by far the most common cause of duty-related deaths in 2020 and 2021. More than four times as many officers have died from Covid-19 as from gunfire in that period. There is no comprehensive accounting of how many American police officers have been sickened by the virus, but departments across the country have reported large outbreaks in the ranks.”

“While the virus has ravaged policing, persuading officers to take a vaccine has often been a struggle, even though the shots have proven to be largely effective in preventing severe disease and death.”

Former President Donald Trump very much wanted his daughter Ivanka to be appointed as World Bank president, and it was Treasury Secretary Steve Mnuchin who actually blocked her ascent to the leadership role, The Intercept reports,

Said one source: “It came incredibly close to happening.”

“When the Biden administration looked for ways to pay for the president’s expansive social policy bill, it proposed raising revenue by cracking down on $7 trillion in unpaid taxes, mostly from wealthy Americans and businesses,” the New York Times reports.

“To help find those funds, the administration wants banks to give the Internal Revenue Service new details on their customers and provide data for accounts with total annual deposits or withdrawals worth more than $600. That has sparked an uproar among banks and Republican lawmakers, who say giving the I.R.S. such power would be an enormous breach of privacy and government overreach.”

“Republicans in recent days have ramped up their criticism of a proposal under discussion by Democrats to increase the amount of information financial institutions report to the IRS about bank accounts,” The Hill reports.

“Democrats are considering such a proposal as a way to help pay for their massive social spending package, though they have not finalized details. The plan under discussion would strengthen tax enforcement against the wealthy, Democrats argue.”

Said Sen. Mike Braun (R-IN): “Every year I visit every county in the state of Indiana, 92 of them. And you know, I can’t ever recall anyone saying that they want the IRS to poke into their business more on a day-to-day basis.”

North Korean leader Kim Jong-un declared while attending a weapons exhibition that the country had “invincible” defense capabilities as he accused the U.S. of being the source of regional tensions, Axios reports.

“China’s military said on Monday it had carried out beach landing and assault drills in the province directly across the sea from Taiwan, though it did not link the exercises to current tensions with Taipei,” Nikkei Asia reports.

Financial Times: The moment of truth over Taiwan is getting closer.

“A decade after the Arab League voted to suspend Syria at the onset of a brutal civil war, Bashar al-Assad is being welcomed back in from the cold by some of America’s closest regional allies,” Axios reports.

“Jordan’s King Abdullah II, the first Arab leader to call for Assad to resign in 2011, spoke to the Syrian dictator last week for the first time since the conflict broke out, and recently reopened the two countries’ main border crossing to help boost trade.”

“Former President Donald Trump’s family company is in advanced discussions to sell the rights to its opulent Washington, D.C., hotel in a deal worth more than $370 million,” the Wall Street Journal reports.

North Carolina Lt. Gov. Mark Robinson (R) “has doubled down after his comments calling transgenderism and homosexuality ‘filth’ drew widespread rebukes and calls for him to resign,” the Fayetteville Observer reports.

Texas gubernatorial candidate Allen West (R) “was released from the hospital after three days of treatment for Covid,” the Daily Beast reports.  Even though he was not vaccinated, he promptly told his followers not to be afraid of the virus that has killed more than 700,000 Americans.