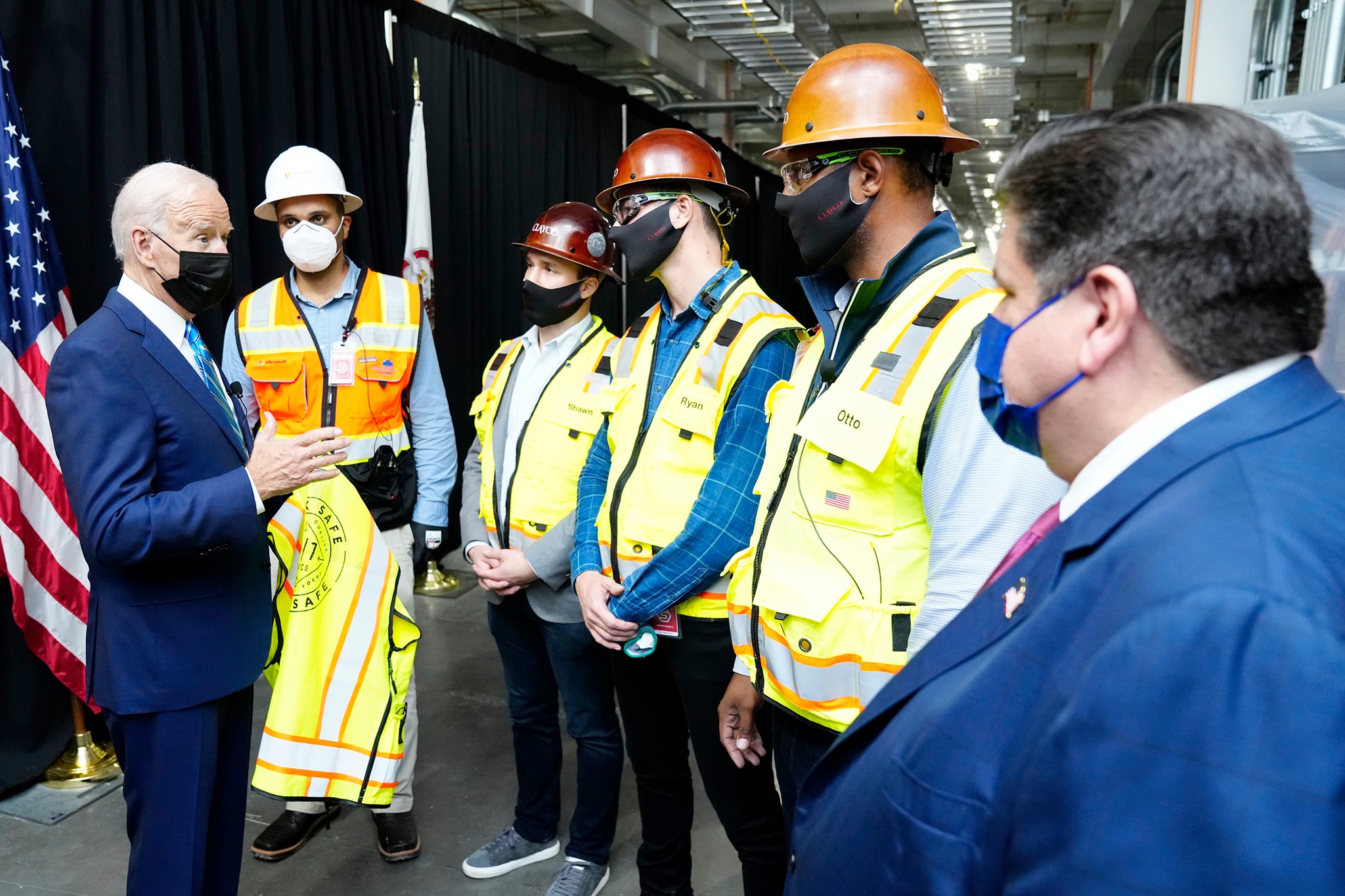 “The federal headwinds against Democrats on the ballot this November have never been stronger,” CNN reports.

“Democrats who were once buoyant that a well-liked President Joe Biden and popular agenda moving through Congress could propel the party to wins in 2021 are now worried that a trying few months for the President and sluggish poll numbers could impact people like Terry McAuliffe, the party’s gubernatorial nominee in Virginia, and Phil Murphy, the incumbent governor running for reelection in New Jersey.”

Said one Democratic operative in Virginia: “If people don’t wake up, we are in trouble.”

Former President Barack Obama will campaign for Terry McAuliffe and Virginia Democrats ahead of the November elections, CNN reports.

Despite recent comments distancing himself from President Biden, Terry McAuliffe (D) said the president will be campaigning for him soon, National Journal reports.   Said McAuliffe: “He’ll be coming back. You bet he will.”

There’s little doubt that President Biden is in a bad spot right now. Biden’s job approval rate is a dismal — and upside down — 44% to 49%.

But there’s also good reason to believe we’re at a low point in Biden’s presidency.

One thing Biden has going for him is that the Republican party is quickly coalescing around Donald Trump once again. And Trump is no more popular today than he was 10 months ago — especially among the swing voters who matter in next year’s midterm elections.

But the other thing is that Biden has more than a year until those elections.

Max Boot: “There appears to be a consensus in Washington that the success of the Biden presidency will hinge on the outcome of the massive infrastructure and social-spending bills now before Congress. That may be true, but their fate won’t affect how I vote.”

“I’m a single-issue voter. My issue is the fate of democracy in the United States. Simply put, I have no faith that we will remain a democracy if Republicans win power. Thus, although I’m not a Democrat, I will continue to vote exclusively for Democrats — as I have done in every election since 2016 — until the GOP ceases to pose an existential threat to our freedom.”

Rep. John Yarmuth (D-KY), chairman of the House Budget Committee,  announced that he will not be seeking re-election.

Politico: “He’s the fifth House Democrat to announce his retirement as the party faces an uphill battle to keep its majority in the 2022 election.”

TEXAS 23RD CD — Republican Raul Reyes announced Thursday that he would run for the state Senate next year rather than seek a rematch against freshman Rep. Tony Gonzales, who beat him by 45 votes in last year’s primary

OREGON GOVERNOR — New York Times columnist Nicholas Kristof officially formed a political action committee, a move that will allow him to raise money and hire staff ahead of a likely official announcement of his candidacy for Oregon governor, Oregon Public Broadcasting reports.

A new campaign ad from New Jersey Democrats attacks GOP gubernatorial nominee Jack Ciattarelli (R) over his past support for a local ban on swearing — and uses some colorful language of its own.

“An elections administrator in North Texas submitted her resignation Friday, following a monthslong effort by residents and officials loyal to former President Donald Trump to force her out of office,” the Texas Tribune reports.

“Hood County would seem an unlikely place for disputes over the last presidential election given that Trump won 81% of the vote there, one of his largest margins of victory in the state.”

“Republican Party leaders across the battleground state of Michigan have quietly worked in recent weeks to replace incumbent county election officials with newcomers, some of whom have sought to undermine the public’s faith in the 2020 vote,” the Detroit News reports.

“The trend focuses on four-member county canvassing boards, the bipartisan panels in charge of verifying records and importantly, certifying results. It comes in the midst of an internal party struggle over whether to accept Democratic President Joe Biden’s win last year.”

“The elections office in Georgia’s heavily Democratic Fulton County said on Monday that two workers had been fired for shredding voter registration forms, most likely adding fuel to a Republican-led investigation of the office that critics call politically motivated,” the New York Times reports.

“The workers, at the Fulton County Board of Elections, were dismissed on Friday after other employees saw them destroying registration forms awaiting processing before local elections in November.”

Cook Political Report: “The Sunshine State has recently looked more like a dark wasteland for Democrats. In 2018, while Democrats were romping elsewhere, Republicans defied polls to eke out the governor’s race and pick up a Senate seat. In 2020, Donald Trump carried the state by three points thanks to vast gains among Cuban and other Hispanic voters, and Republicans expanded their dominance in the state legislature.”

“But the worst for Democrats may be yet to come: Florida, set to gain a 28th seat next year, could be Republicans’ biggest redistricting weapon of the 2022 cycle. In fact, the GOP could erase most of Democrats’ thin House majority in Florida alone.”

PENNSYLVANIA GOVERNOR — Attorney General Josh Shapiro’s campaign confirmed Monday that he was launching his long-anticipated bid to succeed his fellow Democrat, termed-out Gov. Tom Wolf. And while Republicans have a crowded primary as they fight to retake the governor’s office in this major swing state, Shapiro has no serious intra-party opposition anywhere in sight.

Shapiro emerged as the all-but-certain nominee after spending years as one of the most prominent names on the Keystone State political scene. In 2011, he led the Democratic ticket to victory in the races for the Montgomery County Board of Commissioners, which made the new commission chair the first Democrat to lead this voter-rich community in the Philadelphia suburbs since the 1870s.

National Democrats tried to recruit Shapiro to take on Republican Sen. Pat Toomey during the 2016 cycle, but he decided to run for state attorney general instead. Shapiro, who picked up a rare state-level primary endorsement from none other than Barack Obama during that campaign, decisively won the nomination and prevailed 51-49 in November even as Donald Trump was unexpectedly carrying the state.

Shapiro earned national headlines in 2018 when he released a major report that accused the Catholic Church of covering up child sexual abuse by over 300 Pennsylvania priests over seven decades, and he also emerged as a high-profile Trump administration opponent during his first term. Major state Democrats talked openly about him running for governor even before he was re-elected last year: In 2019, when Wolf was asked about the contest to succeed him, he notably pointed at Shapiro and said, “That’s my guy right there.”

Republicans looking to unseat Shapiro in 2020 tried to portray him as “a career politician already looking to run for governor,” but he won his second term 51-46 as Joe Biden was carrying the Keystone State by a smaller 50-49 spread, which also made the attorney general the only one of the three Democrats running for statewide executive office to win last year.

Seidman writes that Shapiro earned more Democratic support during the following months as Trump spread lies about his loss in the state, writing, “In the tense weeks before Biden’s inauguration, Pennsylvania’s attorney general became a ubiquitous presence on MSNBC and CNN and defended the state’s secretary of state in court.” The likely gubernatorial nominee has continued to denounce Trump’s attempts to steal the election, tweeting last week, “Make no mistake: In 2022, the Big Lie will be on the ballot — and we’ve got to vote against it.”

MICHIGAN REDISTRICTING — Michigan’s new independent redistricting commission voted to approve 10 draft maps on Monday afternoon, following a chaotic reversal that saw the board unexpectedly advance a single state Senate plan on Friday, then retract that vote Monday morning. The package includes three maps apiece for the state House and Senate and four proposals for Congress, though more maps from individual commissioners could join the pile. The panel will now hold a series of public town halls and must adopt new maps by Nov. 1.

As for the about-face, Report for America’s Clara Hendrickson’s reported that one commissioner said the panel “should be consistent in its procedure for voting to approve maps.” It’s not clear what lack of consistency concerned the commission, though the initial vote was not originally on Friday’s agenda, and the commissioners also said Monday they preferred to vote on all proposals for the Senate together rather than piecemeal. In addition, the Friday vote took place with a minimum quorum of nine of the board’s 13 members. The commission released different draft maps last month, some of them partial, which were widely panned.

TEXAS REDISTRICTING — Texas’ Republican-run state Senate passed the GOP’s proposed gerrymander of the state’s congressional map on Friday, making what the Texas Tribune described as “minor tweaks” in some rural areas. The plan must still be approved by the state House, where a committee just voted to advance a new map for the Senate. The Senate previously passed its own map.

VIRGINIA REDISTRICTING — After an acrimonious Friday meeting that saw three members walk out, Virginia’s new redistricting commission failed to finish drawing new legislative maps by a key Sunday deadline, thereby handing the process over to the state Supreme Court. The panel said it would instead try to draft new congressional districts, which are due by Oct. 25.

Members of Virginia’s top court are chosen by a majority vote of both chambers of the legislature, and all seven were confirmed when Republicans held a majority. (Only South Carolina uses a similar process.) Two justices tend to lean to the left, though, likely giving conservatives a 5-2 majority. When the constitutional amendment to create the new commission was on the ballot last year, some Democrats expressed opposition precisely because they feared that the court could impose maps that favor the GOP.

VERMONT REDISTRICTING — Vermont’s Legislative Apportionment Board has released several draft maps and will forward final recommendations to lawmakers by Nov. 30. While the board is only advisory in nature, it was created by statute several decades ago, and legislators have in the past taken guidance from its proposals.