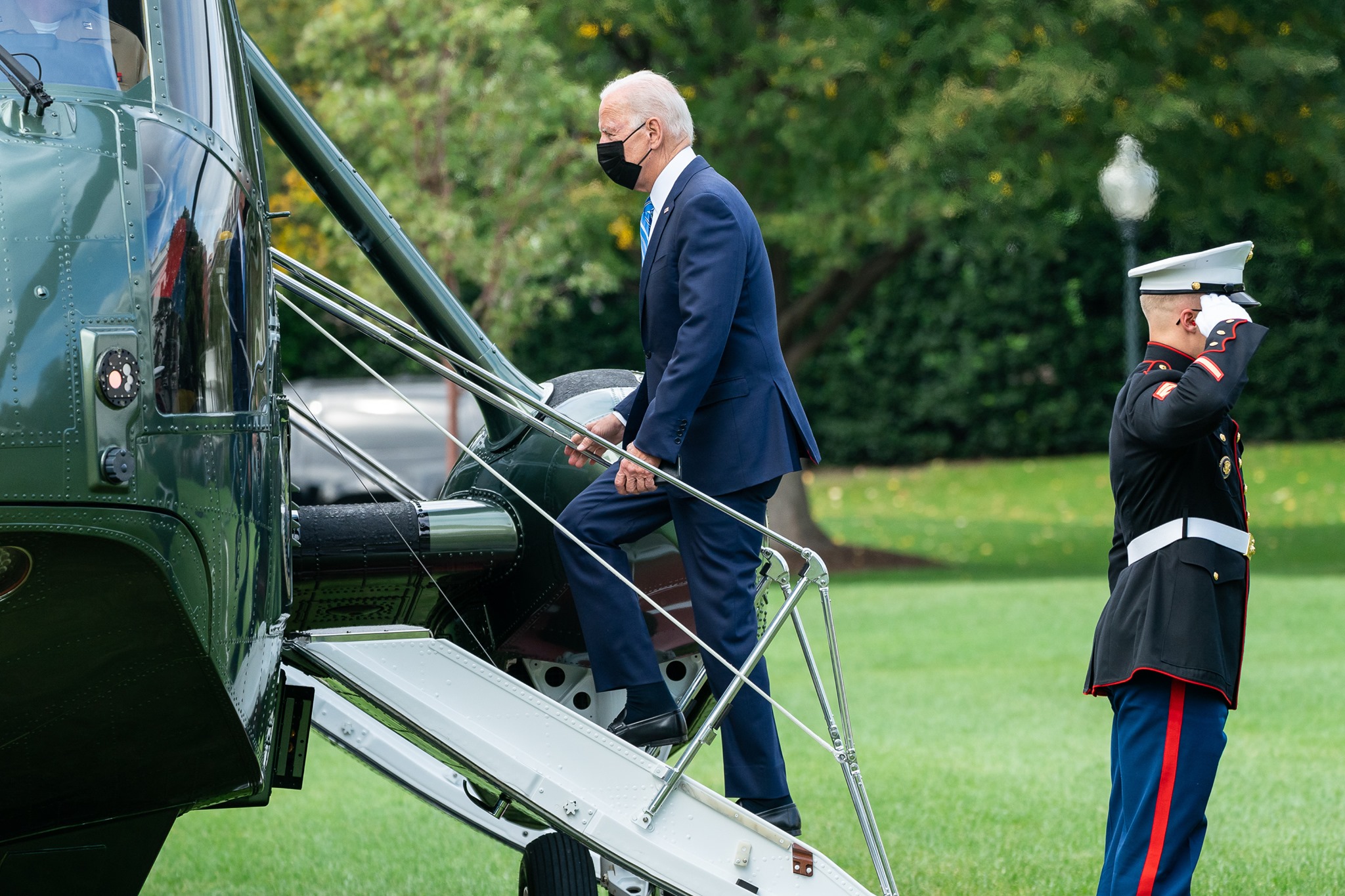 Christopher Newport University’s newest poll brings the school in line with the vast majority of other pollsters who’ve found a small lead for Democrat Terry McAuliffe, giving him a 49-45 edge on Republican Glenn Youngkin. In August, CNU had McAuliffe ahead 50-41, which was tied for the largest advantage anyone had ever given the former governor. CNU’s numbers for Virginia’s other statewide races have also come down to earth, with Democrat Hala Ayala up 48-44 in the race for lieutenant governor and state Attorney General Mark Herring defeating his Republican opponent 49-43.

McAuliffe, meanwhile, has released a new ad hitting Youngkin on schools—a topic that Youngkin has lately tried to exploit against McAuliffe. The spot charges that Youngkin “would bring Donald Trump and Betsy DeVos’ education policies to Virginia,” saying his “plan shifts money from public schools to private schools instead.”

Washington Post: “In the country’s biggest electoral showdown of the year, Virginians are deciding whether to return McAuliffe to office, making him only the second governor in state history to serve a second term, or turn to Youngkin, a wealthy political neophyte. The outcome, strategists from both parties agree, will hinge on which candidate best generates enthusiasm from his base, overcoming the traditionally sharp falloff in voting in the year following a presidential election.”

“Three weeks before Election Day, the race is closer than either party had anticipated. McAuliffe seeks to capitalize on Virginia’s strong shift toward Democrats in recent years, even as his party and President Biden struggle through a rough season in Washington, facing the continuing pandemic, a plateaued economic recovery and intraparty battles over Biden’s plans to invest in infrastructure and social programs. Youngkin’s candidacy, meanwhile, is an early, crucial test of Republicans’ ability to craft a comeback in next year’s midterm elections.”

“Pennsylvania’s high-profile attorney general, Josh Shapiro, will formally announce his candidacy for governor on Wednesday, entering the 2022 race months after making his intentions known and effectively clearing the field of potential rivals for the Democratic nomination,” the AP reports.

Philadelphia Inquirer: How Josh Shapiro locked down the Democratic nomination for governor without even announcing he would run.

Jonathan Last watched a focus group of “nine Democratic voters in Pennsylvania who ran the gamut—from Bernie-stans to a lady who had voted for Trump in 2016.”

“Every single one of them thought Biden was doing a bad job. But that’s not the bad news.”

“Every single one of them thought things were crappy in America right now. Still not the bad news.”

“Not one of them liked Biden personally. They all viewed him as a normal, lying politician.”

“Now we’re there. Here’s the really bad news: None of them believed that Republicans were to blame for the administration’s failures.”

Meanwhile, 84% of Democratic staffers say Democrats will keep the Senate.

Herschel Walker (R) has raised $3.7 million since launching his campaign for U.S. Senate about five weeks ago, as GOP donors came off the sidelines to support the former Georgia football star, the Atlanta Journal Constitution reports.

“The former president’s endorsement can be literal currency in Republican primary fights. The shifting allegiances between McCrory and Budd illustrate how Trump can single-handedly alter not just support but the money race in high-profile political fights.”

“One has been accused of assaulting another White House aide. Another allegedly threatened his ex-wife’s life, exaggerated claims of financial success and alarmed business associates with his erratic behavior. A third has asked a judge to keep past protection-from-abuse orders sealed,” WESA reports.

“As former President Donald Trump wades into contested primaries across the country, he’s trying to exact revenge and remake the Republican Party in his image. In doing so, he has endorsed a series of candidates involved in allegations of wrongdoing, especially concerning their treatment of women.”

ARIZONA 6TH CD — Democrat Adam Metzendorf, who just left a corporate job with the Phoenix Suns and Phoenix Mercury pro basketball teams, has announced a bid against Republican Rep. David Schweikert in Arizona’s 6th Congressional District. This traditionally conservative district in the Phoenix suburbs hosted a hotly contested election last year, but Schweikert hung on by a 52-48 margin, and Donald Trump prevailed by a similar 51-47 spread. Redistricting is underway, though, and the state’s independent commission could revamp the district in unpredictable ways.

IOWA 3RD CD — Democratic Rep. Cindy Axne, who’s still considering a bid for governor, said this week that she’s waiting on the outcome of the redistricting process to decide whether or not to seek re-election. Republicans in the Iowa legislature recently rejected a set of maps proposed by the state’s nonpartisan advisory agency, which could ultimately lead to GOP gerrymanders.

INDIANA 5TH CD — Former Democratic state Rep. Melanie Wright has kicked off a bid against freshman GOP Rep. Victoria Spartz in Indiana’s 5th Congressional District, which Republicans just gerrymandered to make much redder. Wright served three terms in a district that has lurched sharply to the right in recent years, losing by a 55-45 margin in 2020 as Donald Trump was carrying her seat by a punishing 64-31 spread.

TEXAS 38TH CD — Army veteran Wesley Hunt has released a Moore Information survey of an extremely hypothetical Republican primary for the proposed 38th Congressional District that gives him a 38-19 lead over former Rep. John Culberson, who lost re-election in 2018 in the current 7th District. Kathaleen Wall, who spent massive amounts of her own money during the last two cycles only to lose GOP primaries for two other Houston-area seats, the 2nd and 22nd, is in third with 9%.

Don’t dig out those Wall t-shirts or Culberson for Congress fossil cases yet, though. The Texas Tribune’s Patrick Svitek, who first shared the poll, tweets, “Haven’t gotten any word these other folks are interested in running, but sounds like campaign picked several local Republicans w/ primary name ID to establish baseline.”

OREGON 6TH CD — The Oregonian’s ​​Hillary Borrud reports that state Rep. Andrea Salinas, a Democrat who co-chaired the state’s congressional and legislative redistricting committees, has been contacting people to say she’ll be running for the new 6th Congressional District, though Salinas did not say anything publicly. This new constituency, which includes the state capital of Salem and other parts of the mid-Willamette Valley, backed Joe Biden 55-42 according to data calculated by Daily Kos Elections, and there are plenty of Democrats who could end up running here.

Also running for the Democratic nomination are former Multnomah County Commissioner Loretta Smith and former Portland School Board member Derry Jackson, though both announced before the state’s new map became law last month—Multnomah isn’t in the 6th and just the tiniest sliver of Portland is. One Republican, Dundee (pop. 3,200) Mayor David Russ, is in as well. The 6th would have voted 55-42 for Joe Biden last year, according to new calculations from Daily Kos Elections.

COLORADO U.S. SENATOR — Businessman Joe O’Dea, a first-time office-seeker and construction company owner, has entered the GOP primary to take on Democratic Sen. Michael Bennet next year. As Colorado Politics notes, O’Dea has frequently donated to candidates, including a $500 contribution in 2010 to … Michael Bennet, when he was seeking election to a full six-year term. (The year before, Gov. Bill Ritter had appointed him to fill the seat left vacant when Ken Salazar was tapped by Barack Obama to serve as his interior secretary.) Already seeking the Republican nomination are Air Force veteran Eli Bremer and state Rep. Ron Hanks.