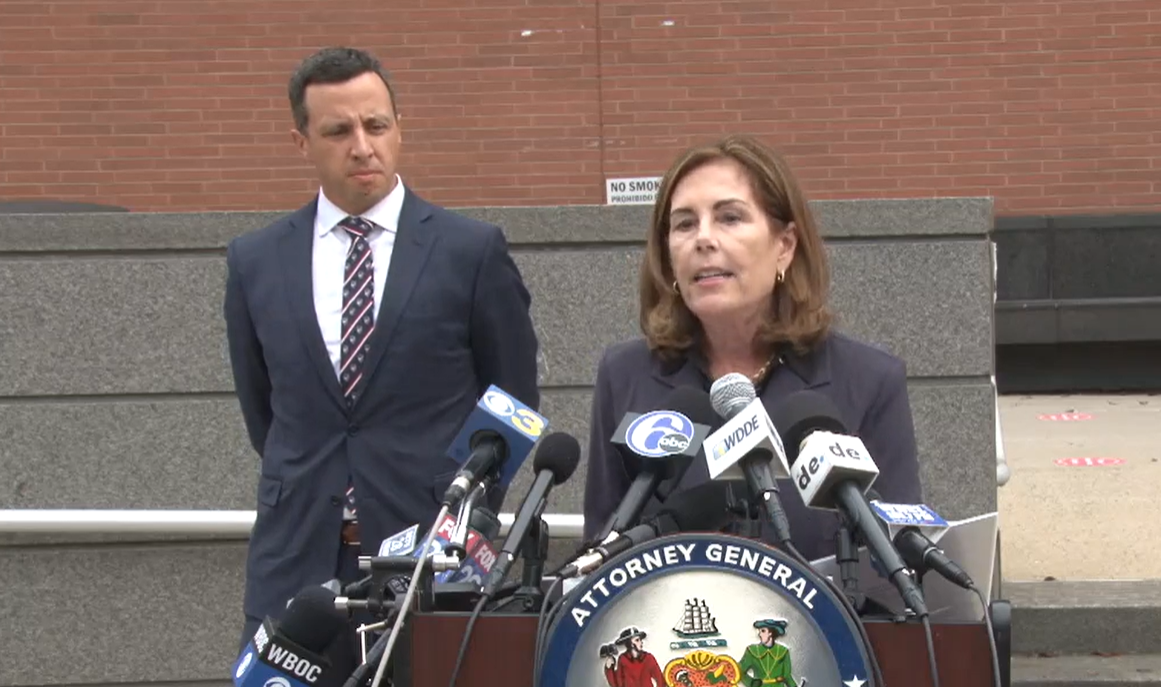 Here is the indictment;


From the DOJ Release:

Following an investigation involving dozens of witness interviews, thousands of document reviews, and more than a year of work, Attorney General Kathy Jennings and the DOJ’s Division of Civil Rights & Public Trust (DCRPT) announced Monday that State Auditor Kathleen McGuiness has been indicted for five criminal charges, including two felonies.

“We strive for a justice system where nobody is above the law or beneath justice,” said AG Jennings. “These are serious charges, and we do not make them lightly. The indictment includes a great deal of evidence that the State Auditor repeatedly broke the law and systemically abused her power, beginning in her first year in office. Our investigation revealed a long trail of corruption, nepotism, official misconduct, intimidation, and fraud that implicated thousands of taxpayer dollars — all from an elected official who is supposed to be a watchdog for exactly this kind of misbehavior. We cannot — and I will not — tolerate criminal corruption, no matter who you are.”

DCRPT opened its investigation more than a year ago, after whistleblowers came forward alleging serious misconduct by the Auditor, including abuse of tax dollars to benefit campaign associates, a pattern of deceit to evade spending oversight, nepotism, theft, and intimidation of employees. Monday’s indictment charges McGuiness with five crimes: Conflict of Interest, in violation of the State Officials’ Code of Conduct; Felony Theft; Non-Compliance With Procurement Law by structuring State payments; Official Misconduct; and Felony Witness Intimidation.

DCRPT’s investigation uncovered a sweetheart deal that McGuiness engineered with My Campaign Group, a political campaign consultant for her 2016 campaign. My Campaign Group markets itself as a company designed “for your campaign needs” and focuses on “provid[ing] political candidates with comprehensive issues platforms – taking them from the campaign trail to elected office.”

The indictment also charges that McGuiness structured payments on the contract to cover up her spending and avoid oversight. Delaware Division of Accounting rules required special approval for purchases or payments of $5,000 or more.  The Auditor directed invoices of more than $5,000 to be paid in increments under $5,000.

Despite McGuiness’ conflict of interest, neither the daughter nor the daughter’s friend were interviewed, nor were their hires delegated to an employee without an ethical conflict.  The indictment further charges that McGuiness provided her daughter access to a State car.

Later that year, McGuiness’ daughter enrolled at College of Charleston in South Carolina. Over the next several months, she remained on OAOA payroll and continued to draw taxpayer paychecks despite not showing up to work, never logging in to work remotely, and rarely sending so much as an e-mail.

As of August 2021, McGuiness’ daughter – who was listed as OAOA’s Public Information Officer and later listed as an intern – had collected more than $19,000 in taxpayer paychecks, in addition to nearly $8,000 paid to the daughter’s friend. The daughter’s paychecks were deposited into a bank account on which the Auditor is an owner.

McGuiness’ behavior concerned several employees, who questioned her behavior and, in some cases, came forward to the DOJ to file whistleblower complaints. The DOJ’s investigation revealed that McGuiness retaliated against real or perceived whistleblowers and engaged in a course of conduct to surveil those she saw as disloyal to her.

Notably, McGuiness submitted dozens of “e-Records” requests to the Department of Technology and Information (DTI) for the contents of OAOA employees’ e-mail accounts. This enabled McGuiness to monitor several employees’ e-mail communications in real time.  McGuiness also discriminated against employees who questioned her misconduct, and enacted office policies to limit the off-hours, personal activities of employees who she believed associated with former OAOA staff.

3 comments on “State Auditor Kathy McGuiness has been indicted”