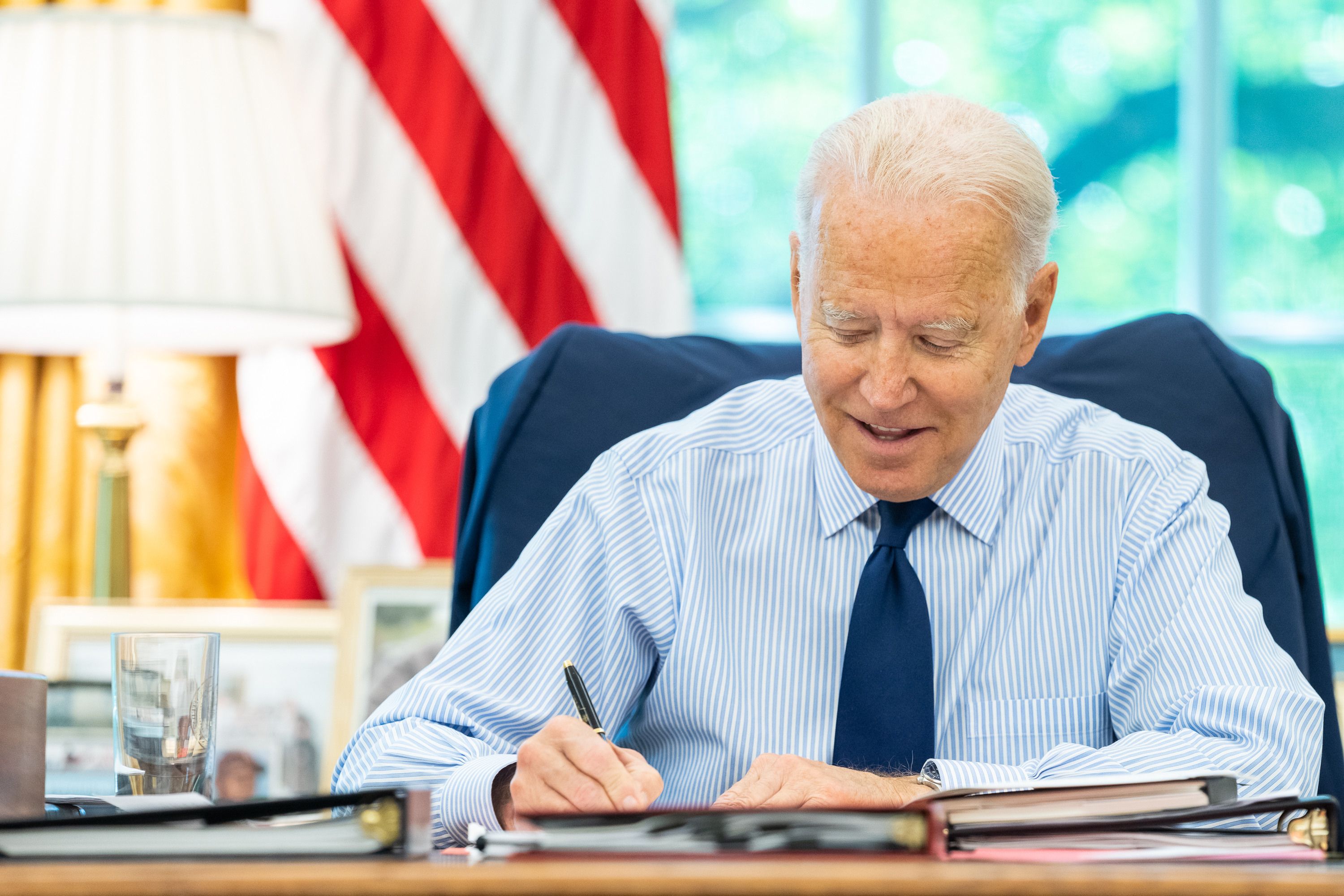 Washington Post: “This upcoming stretch may be Biden’s last chance to revive a presidency that has suffered major blows in recent months. Since being rocked by the Afghan withdrawal and the surging delta variant over the summer, Biden’s approval rating has fallen steadily, hitting a low of 38 percent in the latest Quinnipiac poll. Some of the campaign pledges that inspired Biden’s supporters, from voting rights to immigration reform, have fallen by the wayside. A jobs report Friday suggested the economy has been slowed down by the delta variant.”

CBS News Poll: “Only 10% of Americans describe themselves as knowing a lot of specific things about what’s in the Build Back Better plan, and a majority admit to either not knowing specifics or anything at all.”

“Former President Donald Trump returned to Iowa Saturday for his first visit to the state after losing the presidential election in November, launching a multifront assault on President Joe Biden and congressional Democrats he said were taking the nation to the ‘brink of ruin,’” the Des Moines Register reports.

“Trump, who spoke for more than 90 minutes, rattled off a long list of campaign-style promises and joked about a potential new slogan, but stopped short of announcing a reelection bid.”

Playbook: “That’s a problem for Republicans. Many of them want to make the midterm elections about the issues — inflation, the border, Afghanistan, etc. — to set the election up as a referendum on Biden’s presidency. Trump doesn’t.”

House Minority Whip Steve Scalise (R-LA) repeatedly refused answering in a Fox News interview whether or not believes the 2020 presidential election was “stolen.”

“Virginia Democratic gubernatorial nominee Terry McAuliffe on Sunday expressed his frustration that the House has yet to pass its infrastructure bill,” The Hill reports.

Said McAuliffe: “We’ve got frustration with Washington. You know, why haven’t we passed this infrastructure bill. It passed the U.S. Senate with 69 votes two months ago. We’re tired of the chitty chat up in Washington. Get in a room and get this figured out.”

He added: “They’re paid to get up Washington, get this done and the frustration is, why isn’t it done by now?”

Former Trump aide Dan Scavino has been served his subpoena from the House Select Committee investigating the Jan. 6 insurrection at the Capitol after an extended struggle to find him, CNN reports.

“Retailers are moving away from big sales events in general, and are especially eager to to distance themselves from this particularly disputatious federal holiday.”

“Brad Raffensperger is the only one who refuses to shut up and take it.”

“Raffensperger, who has borne the brunt of Trump’s wrath as the top election official in the state, is running a damn-the-torpedoes reelection campaign that directly confronts the former president — even though it could cost him the GOP nomination.”

President Tsai Ing-wen said that Taiwan would never “bow to pressure” from China’s government and pledged to strengthen the self-governing island’s defenses to protect its “democratic way of life,” the BBC reports.

“Allen West (R) has suspended in-person events for his Texas gubernatorial campaign because he developed Covid symptoms after his wife tested positive—a day after he spoke to a packed indoor crowd,” the Daily Beast reports.

“In a Saturday morning Twitter thread, the Trump-loving ex-congressman said he has not gotten the Covid vaccine but is ‘already taking Hydroxychloroquine and Ivermectin protocols’—two unproven drugs popular with the anti-vaxxer crowd.”

Harry Enten: “President Joe Biden won the 2020 election in large part because he was able to win the center. He emerged with a 13-point win with independent voters, a group that Democratic presidential nominee Hillary Clinton lost by 4 points in 2016. (House Democratic candidates, for their part, took independents by 9 points in 2020.)”

“That’s why it should be alarming to Biden that the recent downturn in his approval rating has come disproportionately from independents, as the Washington Post‘s Henry Olsen first pointed out. This slide could have major electoral implications, if it holds.”

Eugene Robinson: “T.S. Eliot wrote that the world ends ‘not with a bang but a whimper,’ but I fear our great nation is careening toward a third manner of demise: descent into lip-blubbering, self-destructive idiocy.”

“How did we become, in such alarming measure, so dumb? Why is the news dominated by ridiculous controversies that should not be controversial at all? When did so many of our fellow citizens become full-blown nihilists who deny even the concept of objective reality? And how must this look to the rest of the world?”

Politico: “It’s long been known that Zinke splits his time between Whitefish and Santa Barbara, California, where his wife owns property and a yacht.”

“But when I visited the state over the summer, a half-dozen residents of Whitefish and the closest city, Kalispell, told me that, until Zinke launched his most recent campaign, they hadn’t seen him around much since he left Washington in late 2018.”

Dallas Morning News: “All right, all right already. If you’re running for Texas governor, Matthew McConaughey, what do you stand for?”

“As the Oscar-winning film star toys with jumping into the race, he’s rehearsing lines about why he refuses to reveal his stance on just about any hot button issue or policy challenge facing the state, all the while casting himself as a centrist in tune with the ‘sleeping giant’ in the middle of the electorate that shuns extremism and wants to ‘salvage’ American democracy.”

“No one even knows whether he’d run in the Democratic primary, where he’d likely face former El Paso congressman Beto O’Rourke, or in the Republican primary against Gov. Greg Abbott, or take a third-party path.”