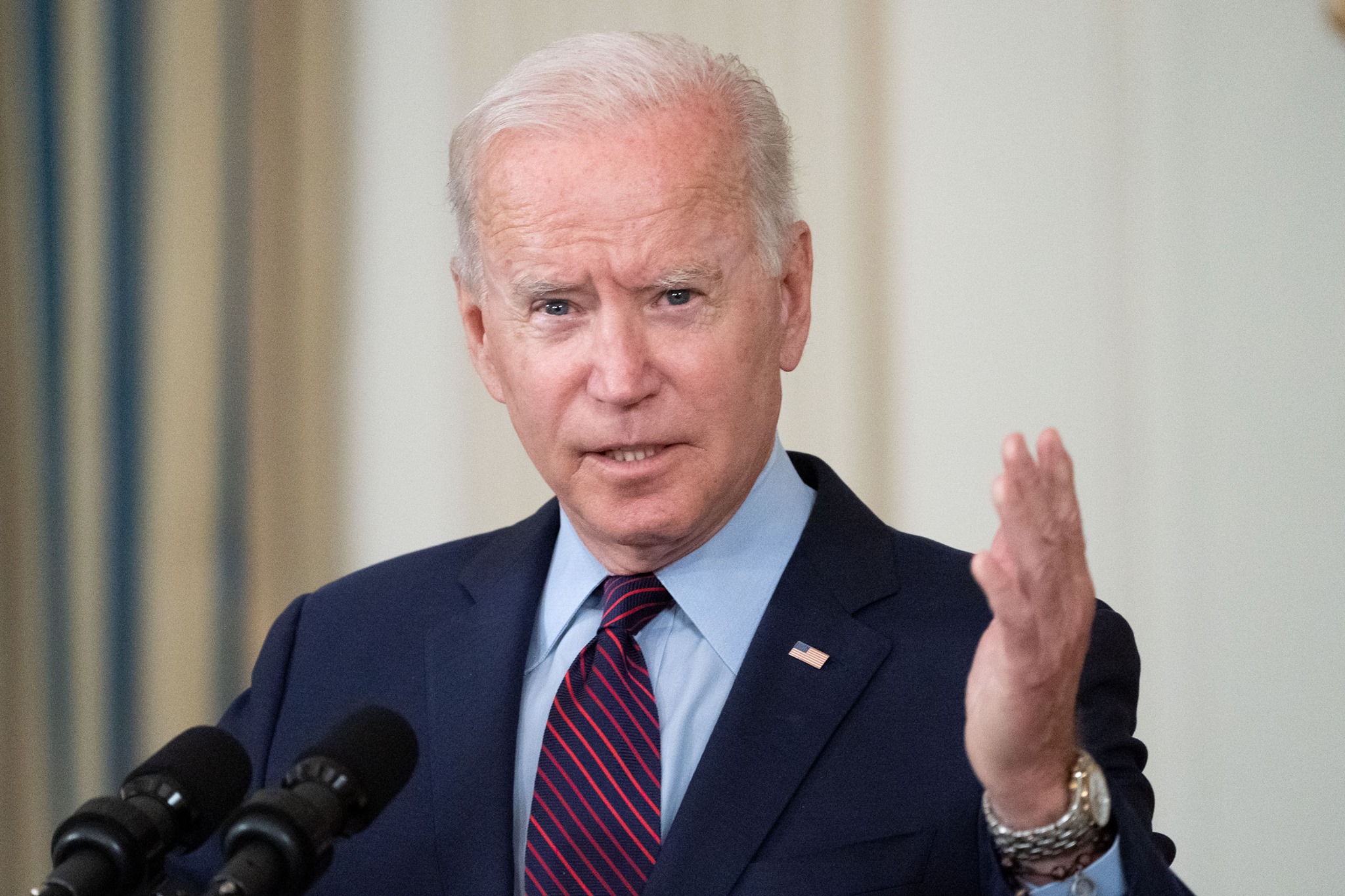 A new Pew Research poll finds that 67% of Republicans would like to see Donald Trump continue as a major political figure for many years to come, including 44% who want him to run for president in 2024.

The share of Republicans who say Trump should continue to be a major national figure has grown 10 percentage points – from 57% to 67% – since a January survey.

A new Gallup poll finds just 44% of U.S. adults say they have a great deal or fair amount of confidence in people who hold or are running for public office, rivaling the record low of 42% from 2016.

Meanwhile, only 55% express a similar level of confidence in the judgments of the American people under the democratic system, the lowest Gallup has measured to date.

A new Gallup poll finds just 7% of U.S. adults say they have “a great deal” and 29% “a fair amount” of trust and confidence in newspapers, television and radio news reporting.

“For three decades, Rob Portman checked all the boxes of a classic pro-business Ohio Republican: Senior positions in both Bush White Houses. Twelve years in the House. A short stint as a lobbyist. A dozen years in the Senate,” the Wall Street Journal reports.

“Until recently, Portman-style candidates typified the party in the state, fending off opposition from socially conservative or tea party activists. No more. With Mr. Portman retiring, the fight to succeed him revolves around one question only: Which flavor of Trump is best?”

The Minnesota GOP’s only candidate so far for secretary of state has left the Republican Party, the Minneapolis Star Tribune reports.

Washington Post: “Many Pence allies say it will be impossible for him to run if Trump is also in the field, though some of his political advisers maintain he could still enter, though with a more difficult path ahead.”

“Pence told the ‘Ruthless’ podcast that he and the former president have spoken about a dozen times since Jan. 6. But a person familiar with the matter said that Pence has so far declined Trump’s entreaties to visit him at his private Mar-a-Lago Club in Palm Beach, Fla., or at his private golf club in Bedminster, N.J., and that the two men have not spoken in recent months.”

“Rep. Ruben Gallego (D-AZ) has emerged as an early favorite to primary Sen. Kyrsten Sinema (D-AZ) in Arizona as fury on the left grows over her opposition to the party’s sweeping reconciliation package,” The Hill reports.

Daily Beast: “Lewandowski, at first privately and then publicly through a lawyer, denied the details of the alleged incident. When that didn’t work, he resisted leaving. Lewandowski then subsequently settled on pitching Trumpworld a not-so-modest proposal: in exchange for his resignation, the super PAC and the pro-Trump team would pay him a large sum of money to go away. Two of the knowledgeable sources said the former 2016 Trump campaign manager’s demand was for hundreds of thousands of dollars.”

“But even though that Lewandowski super PAC—called Make America Great Again Action—currently sits on $6.58 million, mostly from Trump megadonors, he didn’t have the leverage he seemed to think he had. His fellow Trump lieutenants gave him a hard no.”

“Gov. Ron DeSantis and top Republicans in the Florida Legislature are under mounting pressure from their own party to audit the 2020 election even though former President Donald Trump easily won the state,” Politico reports.

“The Republican push for a ‘forensic audit’ — and a hand recount of more than 11.1 million votes — could create an awkward moment for DeSantis, who said in the immediate aftermath of the 2020 election that Florida has shed its reputation for electoral mishaps and was now the ‘model’ for the nation.”

COLORADO U.S. SENATOR — Colorado state Rep. Ron Hanks (R), who has peddled unfounded claims about the 2020 presidential election being fraudulent and attended the January 6 rally outside the U.S. Capitol, filed to run for U.S. Senate, the Colorado Sun reports.

KANSAS U.S. SENATOR — ormer Kansas City Mayor Mark Holland is reportedly planning to challenge Republican Sen. Jerry Moran next year and has filed paperwork to do so, though he hasn’t publicly commented yet. Holland, a Democrat, served a single term as the head of Kansas’ third-largest city but lost re-election in 2018 in an upset.

Kansas remains the state with by far the longest run of electing a single party to the Senate, as no Democrat has won here since 1932. (Three other states are tied with streaks dating to 1970.) Last year, Democrats were particularly optimistic about their chances thanks to shifting demographics and an open seat, but state Sen. Barbara Bollier lost to Rep. Roger Marshall by a 53-42 margin.

NEVADA U.S. SENATOR / GOVERNOR — The Nevada Independent is the first media organization to release a survey of next year’s general elections, and it finds both Democratic incumbents, Sen. Catherine Cortez Masto and Gov. Steve Sisolak, with small leads 13 months out. The poll was conducted by the Mellman Group, which normally does work for Democratic campaigns but has been employed by the Independent for years: Reporter Jon Ralston, who founded the nonpartisan news site in 2017, explained that same year that he’d tapped pollster Mark Mellman because of his strong record in hard-to-poll Nevada, especially ahead of then-Sen. Harry Reid’s upset 2010 victory.

To the numbers: Cortez Masto posts a 45-41 lead over Adam Laxalt, the 2018 GOP nominee for governor who should have no trouble winning the Senate primary. Those numbers are a bit different from Laxalt’s recent internal from WPA Intelligence, which showed him ahead 39-37, though both firms find things tight here.

Mellman, meanwhile, has Sisolak leading former Sen. Dean Heller 46-43, while he enjoys a smaller 45-44 edge against Clark County Sheriff Joe Lombardo. The firm also gives us our first look at the GOP primary and shows Heller, who like Laxalt lost statewide in 2018, with a 31-23 advantage against Lombardo. In third place with 11% is Joey Gilbert, whom we hadn’t mentioned before. The former boxer spoke at the infamous Jan. 6 Trump rally in D.C., but he claims he didn’t enter the Capitol during the ensuing attack. Far behind in fourth place with just 3% of the vote is North Las Vegas Mayor John Lee, a conservative Democrat-turned-Republican.

While all of the candidates Mellman tested have launched campaigns, there’s still one notable Republican name who’s still flirting with running. Rep. Mark Amodei, who is the Silver State’s only Republican member of Congress, said days before this poll was released that he was “torn” about whether to run for re-election or take on Sisolak. Amodei, who said he planned to decide during the final week of October, didn’t sound impressed by his would-be primary foes, arguing, “If you run for governor, you’ve got to come with something other than … ‘Hey, I don’t like the way [Sisolak] handled COVID.'”

NEW YORK GOVERNOR — State Attorney General Tish James continues to tease a possible challenge to Gov. Kathy Hochul in next year’s Democratic primary. At a Democratic event late last week in upstate New York, James told attendees “that day is coming very, very soon when I need to make a decision” about her “future plans.” The New York Times’ Katie Glueck adds that James has “made it clear” to supporters that she’s “weighing a bid and is nearing a final decision.”

Meanwhile, state party chair Jay Jacobs has endorsed Hochul’s bid for a full term, saying he wanted to deter more liberal challengers. While it’s normally de rigueur for party officials to back their own incumbents, Jacobs was an extreme Andrew Cuomo loyalist who only turned against the former governor just before his resignation, so his support for Hochul is a signal that she’s wrested the party apparatus from Cuomo’s control.

RHODE ISLAND GOVERNOR — WPRI’s Ted Nesi notes that former Cranston Mayor Allan Fung, who was the GOP’s nominee for governor in both 2014 and 2018 and had been considering a third bid, was just hired as an adviser to help Rhode Island manage funds received from the American Rescue Plan Act by Democratic Gov. Dan McKee. It seems unlikely that McKee would tap someone for a lucrative contract like this who might then turn around and run against him next year, so this may mean that Fung is no longer eyeing the governor’s race. In fact, says Nesi, Fung is now looking at a campaign for state treasurer, a post that’s open because Democrat Seth Magaziner (who himself is running for governor) is term-limited.

WISCONSIN 3RD CD — State Sen. Brad Pfaff announced on Monday that he’d run for Wisconsin’s open 3rd Congressional District, giving Democrats their first prominent candidate in the race. Pfaff, a former staffer for retiring Rep. Ron Kind, was tapped by Democratic Gov. Tony Evers as his agriculture secretary in January of 2019, a move that allowed him to begin serving right away. However, he was ousted from his job by the GOP-led Senate that November when Republicans voted to reject his confirmation, a move that Evers called “absolute bullshit.”

Republicans claimed new rules Pfaff planned to promulgate for manure storage, intended to mitigate odors and contamination, would hurt farmers, despite the fact that Pfaff enjoyed the support of a number of agriculture groups. Democrats, including Evers, countered that the real reason Republicans booted Pfaff was because he’d criticized the legislature for failing to release $100,000 in funds aimed at preventing suicide among farmers. (The money was eventually disbursed.)

Following his ouster, Pfaff ran for the state Senate to succeed Democrat Jennifer Shilling, who’d defeated Republican Dan Kapanke in the 2011 recalls. Kapanke had actually beaten Pfaff in the very same district back in 2004 by a 53-47 margin when the seat was last open; a dozen years later, he just barely came short in a comeback bid against Shilling, losing by 61 votes. Shilling later resigned to become an energy lobbyist, but Kapanke failed in his second comeback attempt last year, losing to Pfaff 50.3 to 49.7.

Pfaff is likely to face off against Republican Derrick Van Orden, who lost to Kind 51-49 last year and is trying once more. Van Orden has come under attack for spending campaign funds to attend the Jan. 6 insurrectionist rally in D.C., when, it appears, he went inside a restricted area on the Capitol grounds. It’s this topic Pfaff hits in the first seconds of his launch video, when he wryly says, “Life was a little different when I grew up on a farm. We saved our pitchforks for lifting hay—not for storming Congress.”

IOWA REDISTRICTING — Republicans in the Iowa Senate on Tuesday voted down congressional and legislative maps proposed by the state’s nonpartisan Legislative Services Agency over the objections of Democrats, prompting their counterparts in the state House to say they would not consider the maps at all. What happens next, however, is not clear.

In past cycles, as Bloomberg’s Greg Giroux notes, lawmakers have twice rejected initial proposals from the LSA, whose work has often been upheld as a model for nonpartisan mapmaking but is only advisory in nature. On one occasion, they approved the agency’s second map, while on another, they agreed to its third plan. However, if it gets as far as a third iteration, Republicans would be able to amend it freely, allowing them to gerrymander to whatever extent they desire.

That’s never happened before, because in the prior four decades since the legislature passed a bill giving the LSA a central role in redistricting, control over state government has always been divided between the two parties immediately following each census. This time, however, Republicans hold the governing trifecta, which would allow them to run roughshod over the LSA’s recommendations, or even repeal its role outright—precisely what Democrats most fear. The only reason the GOP might hesitate is if it fears a backlash for torching 40 years of nonpartisan redistricting, but if there’s one thing we’ve seen time and again, few voters care about process stories.