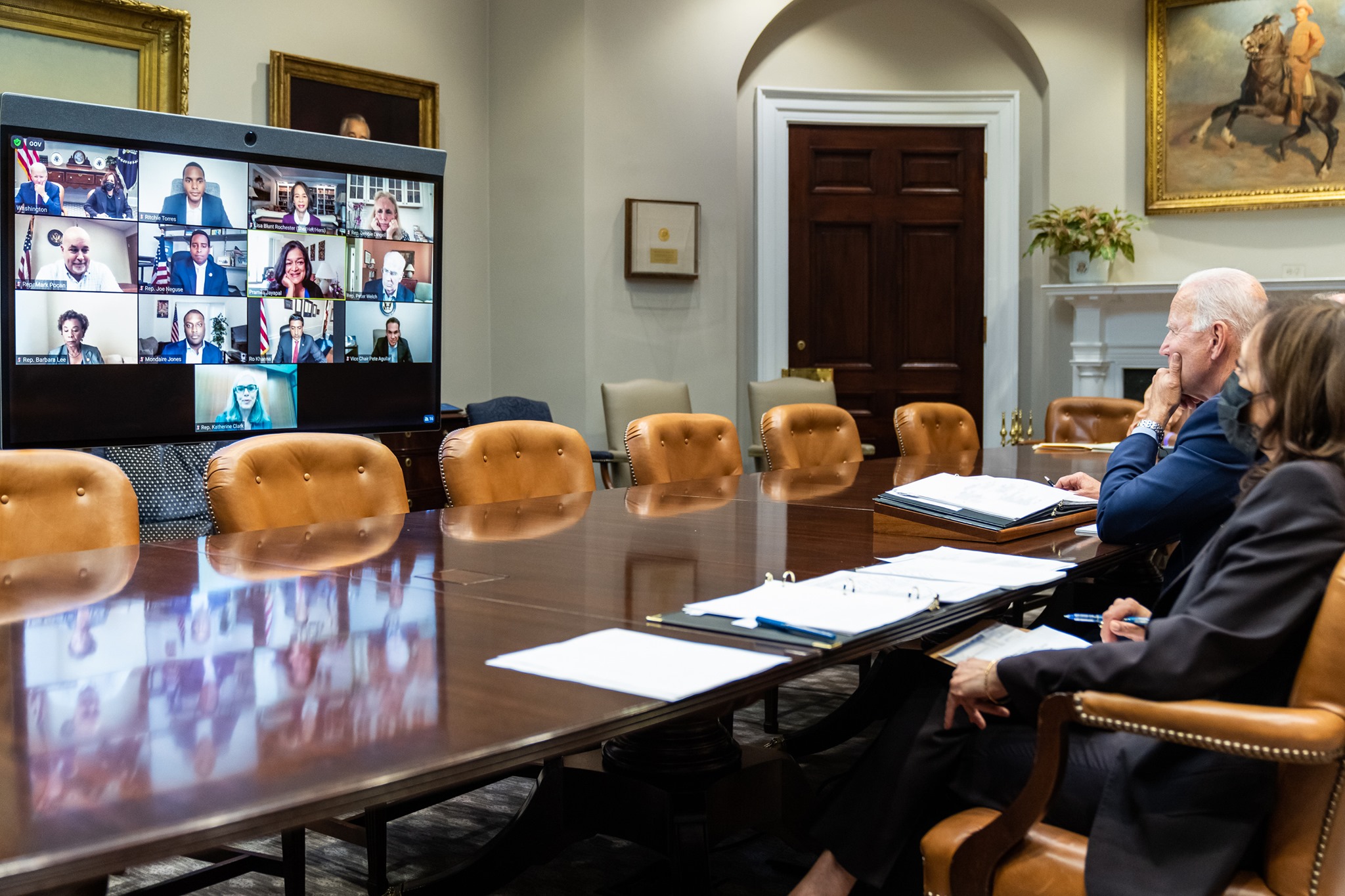 “Top Senate Democrats and Republicans said on Thursday that they had struck a deal to allow the debt ceiling to be raised through early December, temporarily staving off the threat of a first-ever default on the national debt after the GOP agreed to temporarily drop its blockade of an increase,” the New York Times reports.

“The agreement would boost the legal debt cap by $480 billion, according to a Senate aide familiar with the details, which the Treasury Department estimates would be enough to allow the government to continue borrowing through Dec. 3. The current limit is $28.4 trillion, since Aug. 1.”

Washington Post: “But it also tees up yet another vicious fight between Democrats and Republicans over the future of federal spending, a battle likely to be all the more fierce in the waning hours of the year — when Congress must confront other challenges including an urgent need to fund the government and prevent a shutdown. An existing agreement to fund federal operations also expires in early December.”

Sen. John Cornyn (R-TX) told NBC News his staff tells him that lifting the debt limit by $480 billion should take them to January, not December 3 as the Treasury Department says.

Said Cornyn: “We didn’t want to agree to something where they could just throw it into the omnibus. So keeping it separate is pretty important.”

Meanwhile, a potential hiccup from Politico: “Democrats may need help from at least 10 GOP senators to pass the deal on Thursday. Some Republicans, concerned about letting Democrats off easy, don’t want to allow Democrats to pass the measure with a simple 51-vote majority on the floor.”

In the end, 10 Republicans did vote to extend the debt ceiling:

“I don’t understand why we’re folding. This is a complete capitulation, and the argument made yesterday was, well, this may be more pressure than two Democratic senators can stand, regarding changing the filibuster rules. That, to me, is not a very good reason.” — Sen. Lindsey Graham (R-SC), talking to Fox News about the short term deal to raise the debt limit.

Playbook: “The view from the White House and many Senate Democrats is that the McConnell deal frees up the rest of October and November to focus on their reconciliation package.”

Also interesting: “The minority leader seemed skittish enough about where filibuster reform fever was headed in the Democratic caucus that he vetted his compromise plan with Manchin and Sinema.”

“Pfizer and BioNTech said on Thursday morning that they had asked federal regulators to authorize emergency use of their coronavirus vaccine for children ages 5 to 11, a move that could help protect more than 28 million people in the United States,” the New York Times reports.

The former Facebook staffer who went public this week with damning allegations against the social media giant is set to meet with House lawmakers investigating the Jan. 6 insurrection, CNN reports.

“The report indicates that the House Freedom Caucus, a group of hardline conservatives with close ties to Trump, took an active role in helping the president strategize about ways to undercut Joe Biden’s victory. But the report indicates that Perry, more than other House Republicans, took a direct role in attempting to help Trump install loyalists in the Justice Department who would assist in undermining the legitimacy of Joe Biden’s victory.”

“Even by the standards of President Donald Trump, it was an extraordinary Oval Office showdown. On the agenda was Mr. Trump’s desire to install a loyalist as acting attorney general to carry out his demands for more aggressive investigations into his unfounded claims of election fraud,” the New York Times reports.

“On the other side during that meeting on the evening of Jan. 3 were the top leaders of the Justice Department, who warned Mr. Trump that they and other senior officials would resign en masse if he followed through. They received immediate support from another key participant: Pat A. Cipollone, the White House counsel. According to others at the meeting, Mr. Cipollone indicated that he and his top deputy, Patrick F. Philbin, would also step down if Mr. Trump acted on his plan.”

“Allies of former President Donald Trump testified under oath that they did little to check out some of the uncorroborated claims they made about 2020 election fraud before amplifying them on the national stage,“ CNN reports.

“While the bogus fraud claims have long been debunked, these latest revelations are being made in sworn depositions and highlight how little vetting was done by certain Trump allies seeking to spread doubt about the integrity of the presidential election results.”

“A federal judge late Wednesday blocked enforcement of a Texas ban on abortions after six weeks of pregnancy, a legal blow against a novel law that has severely limited the procedure statewide,” the Wall Street Journal reports.

“U.S. District Judge Robert Pitman in Austin issued a preliminary injunction blocking the law, saying the state had pursued ‘an unprecedented and aggressive scheme to deprive its citizens of a significant and well-established constitutional right.’”

“His order came in a case brought by the Justice Department, which sued Texas last month after abortion-rights advocates were unable to obtain a court order against the Texas restrictions.”

“The Supreme Court is considering Wednesday whether something that most everyone knows can still be a ‘state secret’ the government cannot be compelled to reveal,” the Washington Post reports.

“The case involves a request by a Guantánamo Bay terrorism suspect — mistakenly thought to be a leader of al-Qaeda — for more information about his CIA-sponsored torture. The government says it would threaten national security to have to confirm widespread reports that he was tortured at a secret detention site in Poland.”

“The Biden administration warned Arizona on Tuesday that it could lose some of its state and local recovery funds because it has been using money meant to combat the pandemic to undercut mask requirements in schools,” the New York Times reports.

“That’s just where we went to get what we wanted out… By and large, they didn’t get tough with us. They just took what we were saying and disseminated it.”  — Trump White House press secretary Stephanie Grisham, on how used used Fox News.

“Treasury Secretary Janet Yellen is defending a Biden administration proposal that would require banks to report data to the Internal Revenue Service on transactions over $600, calling the collection of information ‘routine,’ after taking heat for the idea that is widely seen as an unprecedented invasion of privacy,” the New York Post reports.

“A candidate for the Communist Party in Russia’s parliamentary elections, Mikhail Lobanov, went overnight from being an obscure university math lecturer to being the new face of a rising threat to the Kremlin,” the Washington Post reports.

“He nearly derailed a high-profile, pro-Putin candidate in southwest Moscow in last month’s voting. Then Lobanov claimed his victory was stolen by authorities via an opaque new system of online voting.”

“Russia’s Communist Party has long been known for its compliance, never threatening the Kremlin, in return for state funding and perks. But some young communists and leftist allies did not get that memo. They are starting to behave like a genuine opposition.”

“Russia has reported a record number of Covid deaths for four of the past six days, as the country experiences a devastating fourth wave caused by the Delta variant and a low vaccination rate of under 30% of the adult population,” The Guardian reports.

“The son and namesake of the late Philippine dictator Ferdinand Marcos, who was toppled in a 1986 revolt, announced Tuesday that he would seek the presidency in next year’s elections in what activists say is an attempt to whitewash a dark period in the country’s history marked by plunder and human rights atrocities,” the AP reports.

New York Times: “Almost everything that German factories need to operate is in short supply, not just computer chips but also plywood, copper, aluminum, plastics and raw materials like cobalt, lithium, nickel and graphite, which are crucial ingredients of electric car batteries.”

“The auto industry has been hit the hardest. Opel, a unit of Stellantis, the company that owns Jeep and Fiat, said in September that it would shut down a factory in Eisenach until next year because of a shortage of semiconductors. The plant’s 1,300 workers will be furloughed.”

“India stands on the brink of widespread power shortages as most of the country’s coal-fired plants have enough fuel for only a few more days,” Nikkei Asia reports.  Meanwhile, Bloomberg reports China “ordered its banks to ramp up funding to coal and energy companies, another step in its efforts to ease a power crunch and ensure supplies this winter.”

Financial Times: “China has started unloading a small number of Australian coal shipments despite an unofficial import ban, analysts said, in a move underscoring the intensity of the power crunch facing the world’s second-largest economy.”

“Top American counterintelligence officials warned every CIA station and base around the world last week about troubling numbers of informants recruited from other countries to spy for the United States being captured or killed,” the New York Times reports.  “The message, in an unusual top secret cable, said that the CIA’s counterintelligence mission center had looked at dozens of cases in the last several years involving foreign informants who had been killed, arrested or most likely compromised. Although brief, the cable laid out the specific number of agents executed by rival intelligence agencies — a closely held detail that counterintelligence officials typically do not share in such cables.”

Bloomberg: “Fights break out among angry motorists trying to get fuel. Grocery staples are out of stock on store shelves. A charity warns that doubling heating bills will force a million households to rely on extra blankets to stay warm.”

“This was supposed to be the year the U.K. broke free of the European Union and forged ahead as a buccaneering free trader, delivering the benefits of a new, confident ‘Global Britain’ to workers and companies at home. Instead, that picture of Brexit utopia is looking more like a dystopia.”

“Prime Minister Boris Johnson shrugged off Britain’s problems of empty gas pumps, worker shortages and gaps on store shelves as he told fellow Conservatives on Wednesday that the U.K. would emerge from Brexit and the coronavirus pandemic as a more productive and dynamic nation,” the AP reports.

Foreign Affairs: “In early 2017, China appeared to be on a roll. Its economy was beating estimates. President Xi Jinping was implementing the country’s Belt and Road infrastructure initiative and was on the cusp of opening China’s first overseas military base in Djibouti. Most important, Xi seemed poised to take advantage of President Donald Trump’s determination to pick fights with U.S. allies and international institutions…”

“Nearly five years on, Beijing is facing its biggest international backlash in decades. Negative views of China are near record highs across the developed world, according to a Pew Research Center survey from June, which showed that at least three-quarters of respondents in Australia, Japan, South Korea, Sweden, and the United States now hold broadly negative views of the country.”

“Yet Beijing shows no sign of shifting course. Unlike previous eras of backlash against China, such as the one that followed the Tiananmen Square massacre in 1989, this one has not prompted a recalibration in Beijing.”