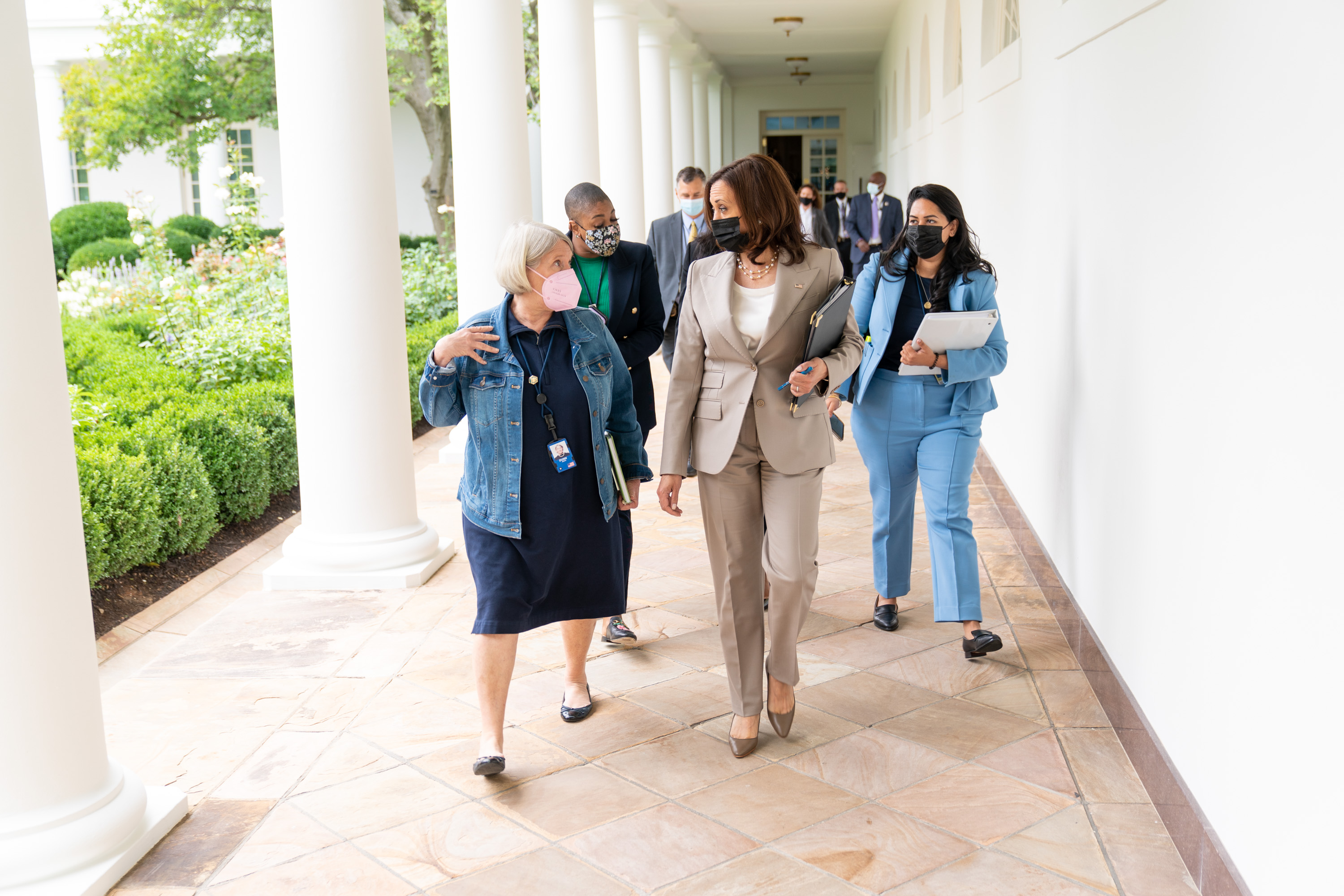 A new Emerson College poll in Virginia finds Terry McAuliffe (D) barely ahead of Glenn Youngkin (R) in the race for governor, 49% to 48%.

McAuliffe at a virtual campaign rally: “We are facing a lot of headwinds from Washington. As you know, the president is unpopular today, unfortunately, here in Virginia, so we have got to plow through.”

Playbook: “The Virginia gubernatorial race is shaping up as a bellwether for the midterms and will help determine whether Democrats see Biden as an asset or a liability in 2022.”

“McAuliffe has repeatedly tried to distance himself from Biden and the Democratic Congress — for instance, at a recent debate, McAuliffe said that the proposed $3.5 trillion price tag of Dems’ reconciliation package was ‘too high.’ Even so, that’s a tall task, considering that McAuliffe is longtime friends with the president, and, of course, is the former chair of the DNC.”

When Democrats lost the Virginia governor’s race in 2009, it foreshadowed a blow out in the 2010 midterm elections.

A new Quinnipiac poll finds President Joe Biden with the lowest job approval rating since taking office, 38% to 43%. Biden received net negative scores in the double digits on all key issues except for his handling of the pandemic.

Said pollster Tim Malloy: “Battered on trust, doubted on leadership, and challenged on overall competency, President Biden is being hammered on all sides as his approval rating continues its downward slide to a number not seen since the tough scrutiny of the Trump administration.”

“The attorney leading a partisan review of Wisconsin’s 2020 election acknowledged this week that he doesn’t understand how elections are supposed to be run,” the Milwaukee Journal Sentinel reports.

Said former state Supreme Court Justice Michael Gableman: “Most people, myself included, do not have a comprehensive understanding or even any understanding of how elections work.”

COLORADO REDISTRICTING — Two Latino advocacy groups say they plan to contest Colorado’s new congressional redistricting proposal, which they argue dilutes the voting power of minority communities in contravention of the state constitution. The state Democratic Party also says it has concerns about whether the commission faithfully followed a separate directive to maximize the number of competitive districts.

The Latino organizations say they plan to file a brief with the state Supreme Court, which must approve any maps before they can take effect, while the state party is “reviewing its legal options.” The Colorado branch of the good-government group Common Cause says it, too, might join those making submissions to the court, which are due by Friday. The justices will then hold oral arguments on Tuesday before rendering a decision by Nov. 1. If they reject the map, commissioners would get a second chance to draw another one to address the court’s objections.

ARIZONA REDISTRICTING — Arizona’s independent redistricting commission unanimously voted to release its first draft congressional map on Tuesday, but commissioners cautioned that it’s only a template to which further changes will be made. One way you can be certain it’s far from final is that the smallest district has about 15,000 fewer people than the largest; barring very specific circumstances (which don’t obtain here), the Supreme Court allows no population deviation at all between congressional districts. To view the plan, you’ll need to make a free account here, then load the map titled “CD Test Map Version 1.1”.

TEXAS REDISTRICTING — Texas’ Republican-run legislature has advanced several redistricting plans that they’d recently proposed, all of which would lock in GOP gerrymanders. Before the full state Senate, Republican lawmakers passed a new map for the chamber’s own districts, while a committee approved a new congressional map, both with some tweaks to prior versions. Meanwhile, in the state House, a committee signed off on a new map for the lower chamber on a party-line vote, again with some modifications.

The new commercial once again uses Donald Trump as a bludgeon against Brnovich, whom Trump has repeatedly trashed for recognizing Joe Biden’s victory in the state. The narrator argues that the attorney general “isn’t doing his job on illegal immigration” and goes on to fault him for having “opposed President Trump on adding a citizenship question to the Census.” The spot then shows footage of Masters proudly proclaiming, “We got to stop illegal immigration so that American jobs go to American workers.”

PENNSYLVANIA U.S. SENATOR — Pennsylvania Senate candidate Sean Parnell (R) “has asked a judge to seal records in his ongoing custody case and to ban his wife and her attorney from talking publicly about past protection-from-abuse orders against him — matters that have stirred political attacks and media scrutiny,” the Pittsburgh Post-Gazette reports.

UTAH U.S. SENATOR — Former CIA officer Evan McMullin, who took 21% in Utah in the 2016 general election as an anti-Trump conservative, announced Tuesday that he would take on Republican Sen. Mike Lee as an independent.

McMullin did not mention Trump, who earned 57% of the vote in 2020 after taking just 45% here four years before, in his launch video, though he did feature footage of the Jan. 6 attack on the Capitol. Instead, the independent positioned himself as an alternative to “extremes in Washington” and “as a patriot committed to defending our nation.”

CONNECTICUT GOVERNOR — While Democratic Gov. Ned Lamont hasn’t given any obvious sign that he’s thinking of retiring, the incumbent said this week that he hadn’t decided whether or not to seek a second term in 2022. “I don’t want to play games with it,” Lamont said, adding, “I think I’ll make up my mind by the end of this year.” He also bemoaned, “Everybody in our capital, Hartford, is running all the time. It’s a nonstop campaign factory and we’ve still got a lot of work to do.”

New York Times: “The prospect that Mr. Trump may run again in 2024 only compounds what Democrats fear: that Republicans could gain full control over the three key Northern states in 2022 and, two years later, interfere with or overturn the outcome of a narrow Democratic presidential victory in 2024.”

OHIO GOVERNOR — Rep. Warren Davidson has blown past his self-imposed September deadline for deciding whether he’ll challenge Gov. Mike DeWine in the Republican primary, and he also held a fundraiser Monday to benefit his congressional campaign. That doesn’t mean Davidson has ruled out a gubernatorial bid, though, as Ohio allows candidates to transfer federal campaign money to state-level committees.

COLORADO 3RD CD — Democratic state Sen. Kerry Donovan said Monday that she was pausing her fundraising for her campaign against far-right Republican Rep. Lauren Boebert until the Colorado Supreme Court rules whether the map passed last week by the state’s new independent congressional redistricting commission can go into effect. Donovan acknowledged that the 3rd District would become even more conservative under these boundaries, which she called “an inexplicable change given that Colorado has grown significantly more Democratic since the last redistricting process 10 years ago.”

MINNESOTA 4TH CD — Amane Badhasso, a member of Saint Paul’s Department of Human Rights & Equal Economic Opportunity who also worked as a senior staffer for Joe Biden’s presidential campaign in Minnesota, announced this week that she was challenging longtime Rep. Betty McCollum in the Democratic primary. Badhasso, who would be the first Ethiopian American member of Congress, argued, “We have not seen that pursuit of economic justice and racial justice in a manner we should be seeing in the progressive leadership.”

McCollum was first elected to this safely blue St. Paul-based seat in 2000 and has faced no serious opposition during the ensuring two decades. The incumbent also responded to Badhasso’s declaration by making it clear she was running for a 12th term.

NEW HAMPSHIRE 1ST CD — Former TV reporter Gail Huff Brown announced Tuesday that she would seek the Republican nomination to take on Democratic Rep. Chris Pappas in the 1st Congressional District, a competitive seat that the GOP legislature will have the chance to gerrymander this cycle. Huff Brown, who is the wife of former Massachusetts Sen. Scott Brown, joins a primary that includes former White House staffer Karoline Leavitt; state Rep. Tim Baxter; and 2020 nominee Matt Mowers, who lost to Pappas 51-46 as Joe Biden was carrying the district 52-46.

Huff Brown spent 17 years working as a reporter for Boston’s ABC affiliate WCVB-TV, a position that gave her the chance to reach most Granite State households. (About 85% of the state’s residents live within the Boston media market, so Massachusetts politicians and media figures are often familiar faces for New Hampshire’s denizens.) She then relocated to D.C. in 2010 months after her husband’s upset win in the Massachusetts special election and took a part time job with a local TV network.

In 2013, the year after Brown lost re-election to Elizabeth Warren, the couple moved to New Hampshire. Brown went on to lose a 2014 Senate bid in his adopted state against Democratic incumbent Jeanne Shaheen, while Huff Brown later worked as a contributor for New Hampshire 1 News Network. The two relocated again in 2017 after Donald Trump picked Brown to become ambassador to New Zealand and Samoa, and they returned to the Granite State following Trump’s defeat.

NEW HAMPSHIRE 2ND CD — Brewery owner Jeff Cozzens, a Republican who WMUR says “is also a national security expert with an emphasis in Islamic militancy,” said this week that he would challenge Democratic Rep. Annie Kuster. Cozzens has been an ally of Gov. Chris Sununu, who appointed him to the state’s community college board; Sununu also just appeared at Cozzens’ establishment during a Sunday Night Football appearance just before the Patriots-Buccaneers football game.

As we’ve written before, though, the 2nd District may not be much of a GOP target next year. Republicans have made it clear that they want to make the 1st District more conservative, which they can’t do without subsequently making Kuster’s seat more Democratic.

OREGON 4TH CD — The AP reports that Army National Guard veteran Alek Skarlatos donated $93,000 in unused funds in February from his unsuccessful 2020 bid for Congress to a nonprofit he created called the 15:17 Trust, which then proceeded to do little except later return $65,000 to Skarlatos’ campaign.

That raises multiple flags. For one, while candidates can give leftover funds to nonprofits, they can’t give them to organizations they run. For another, nonprofits—just like for-profit corporations—can’t donate to political campaigns. Skarlatos’ filings describe the $65,000 infusion as a “refund,” but as a former FEC attorney explained, “You can’t, months later, send a different amount from a nonprofit company to a campaign and say it was a refund for a larger amount that was transferred much earlier.”

Skarlatos, a Republican who is seeking a rematch with Democratic Rep. Peter DeFazio in Oregon’s now revamped 4th District, didn’t offer any kind of substantive response to the AP’s questions, though a spokesperson insisted that the transactions were “completely legal.”

TEXAS 37TH CD — The GOP’s proposed congressional gerrymander would create a solidly blue new seat in Austin, and Democratic state Rep. Gina Hinojosa acknowledged Monday that people have asked if she’s interested in running for it. Hinojosa declined to rule out the idea, saying instead, “My focus right now is fighting for fair maps at every level. There will be time for me and anyone else who wants to consider a congressional office or any other political ambition.” She added, “With no final maps, now is not the time.”

Hinojosa’s comments are similar to the sentiment expressed last week by Wendy Davis, who was Team Blue’s 2020 nominee for the current 21st District. Davis, a former state senator who moved from Fort Worth to Austin following her defeat in the 2014 race for governor, said “Discussions around who may or may not run for election and in which districts is not the right conversation to have at this time.”