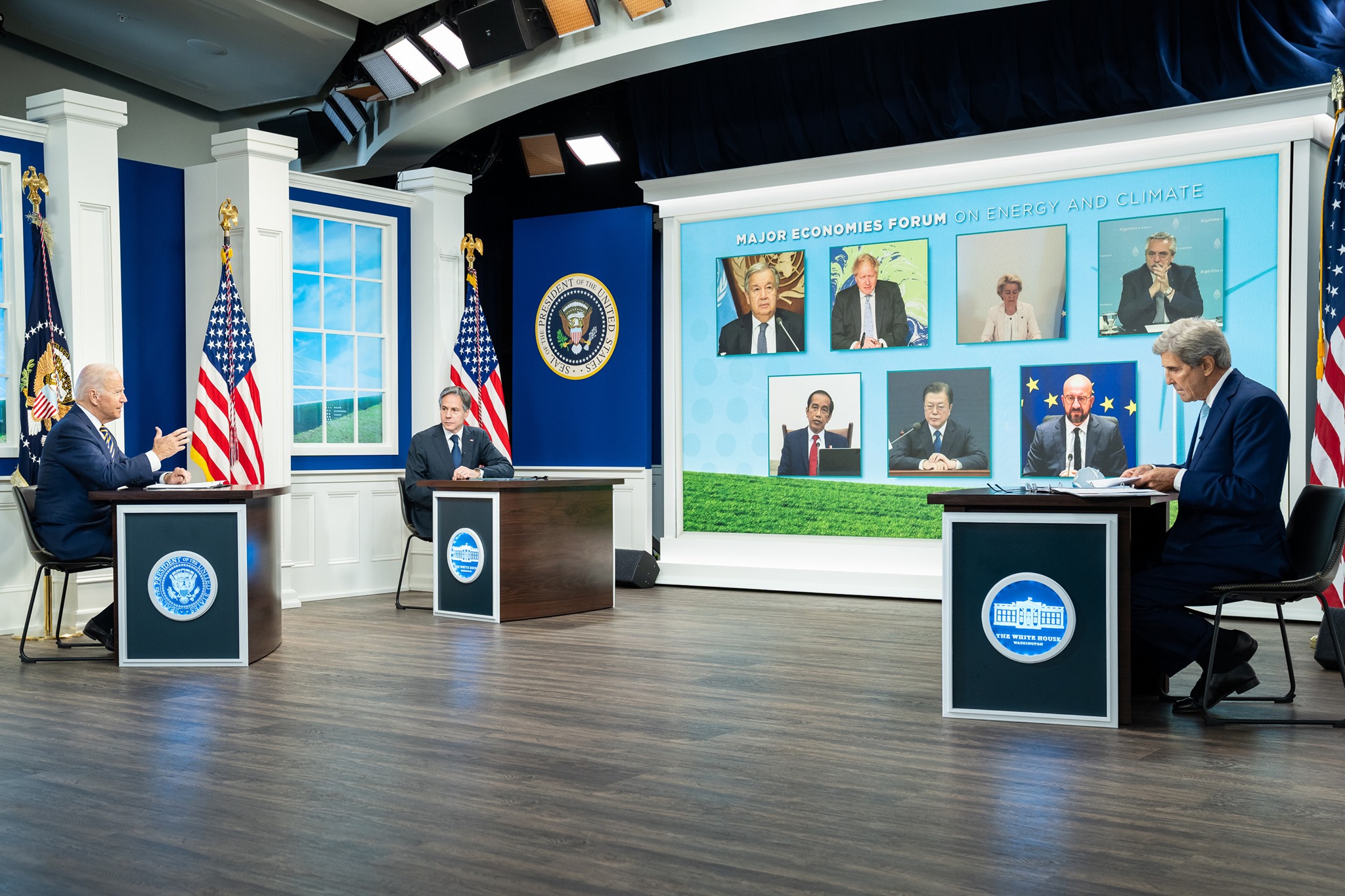 In addition, Americans support a $3.5 trillion spending bill on social programs such as child care, education, family tax breaks, and expanding Medicare for seniors, 54% to 40%.

A new Quinnipiac poll finds 46% of Americans would rather see Republicans win control of the House, while 43% say Democrats.

“Weeks before Virginia’s gubernatorial election, the campaign for Democratic candidate Terry McAuliffe is reaching out to an unexpected constituency: Taylor Swift fans,” The Verge reports.

“On Tuesday, the McAuliffe campaign launched a series of Facebook, Instagram, and Google search ads highlighting his opponent Glenn Youngkin’s role in the controversial purchase of Taylor Swift’s master recordings in 2019. The buyout of Swift’s masters has been a point of bitter contention for the singer and her fans and could be an unexpected liability in the upcoming race.”

New York Times: “The share of the Democratic presidential vote in the Midwest declined most precipitously between 2012 and 2020 in counties that experienced the steepest losses in manufacturing and union jobs and saw declines in health care, according to a new report to be released this month.”

FiveThirtyEight: “At the time, we theorized that Biden’s approval rating might recover before too long, especially once the news cycle moved on from the crisis in Afghanistan. After all, presidents’ approval ratings tend to revert to the mean, and fluctuations in former President Donald Trump’s approval rating were especially short-lived.”

“But we’re now more than a month removed from Biden’s difficult August, and there have been no signs of a rebound in his approval rating. At the end of the day on Oct. 5, Biden’s approval/disapproval spread was 44.8 percent to 47.9 percent. That approval rating, in fact, is so far the lowest of his presidency.”

VIRGINIA GOVERNOR — “Virginia Republican gubernatorial nominee Glenn Youngkin continues to call for an ‘audit’ of the voting machines in his state, an echo of the Republican push to investigate 2020 election results around the country following former President Donald Trump’s unfounded claims of fraud,” Politico reports.

“California Republicans saw few silver linings after Gov. Gavin Newsom (D) soundly defeated the campaign to recall him this month. He raised tens of millions of dollars and motivated Democratic turnout to squash the recall by some 20 percentage points,” the Sacramento Bee reports.

“But if the recall is any indication of what Californians want in next year’s midterm election, there could be a glimmer of hope for Republicans angling to unseat Democrats in of pair congressional districts where voters favored ousting Newsom.”

North Carolina Lt. Gov. Mark Robinson (R) said on a video that the media is an “evil” force in the country, The Hill reports.   Said Robinson: “That television set is a one-eyed devil sitting right in your living room for the purpose of destroying your mind. Now I’ve heard the media described like this one time and I’m inclined to believe it.”

TEXAS 38TH CD — Sen. Ted Cruz has thrown his support behind Army veteran Wesley Hunt, who currently faces no serious GOP primary opposition in his campaign for the proposed 38th District in the conservative Houston suburbs.

ILLINOIS GOVERNOR — The Republican firm Ogden & Fry gives state Sen. Darren Bailey 33% of the vote in its opening poll of the GOP primary to take on Democratic Gov. J.B. Pritzker, with well-funded venture capitalist Jesse Sullivan a distant second with 6%.

Sullivan launched his first TV spot on Saturday, well ahead of next year’s GOP primary, which his campaign says will run for five weeks on a “variety of cable networks and times of day.” Sullivan, who served in Afghanistan as a uniformed civilian aiding the armed forces, tells the audience, “Growing up in central Illinois, I learned these core values of faith, family and service.” Democratic incumbent J.B. Pritzker began his own early ad campaign back in July.

NORTH CAROLINA U.S. SENATOR — Businesswoman Marjorie Eastman, a combat veteran who served with the Army in Iraq and Afghanistan, announced Tuesday she was joining the Republican primary for this open seat.

CALIFORNIA 37TH CD — Culver City Vice Mayor Daniel Lee has filed paperwork with the FEC ahead of a possible bid for California’s open 37th Congressional District, which is open because Democratic Rep. Karen Bass is running for mayor of Los Angeles. Lee ran in a special election for the state Senate earlier this year but lost in a 69-13 blowout to fellow Democrat Sydney Kamlager.

COLORADO 8TH CD — Adams County Commissioner Chaz Tedesco entered the race for Colorado’s new 8th Congressional District on Monday, making him the second notable candidate after state Rep. Yadira Caraveo to join the Democratic primary. The state’s new independent redistricting commission recently signed off on a new House map but it’s still awaiting review by the state Supreme Court. The proposed 8th, located in the Denver suburbs, would be a swingy district that would have gone 51-46 for Joe Biden last year but 46-45 for Donald Trump in 2016.

NEBRASKA 1ST CD — This is very strange: Republican Rep. Jeff Fortenberry put up, then took down, a fundraising page for a legal defense fund claiming, “Biden’s FBI is using its unlimited power to prosecute me on a bogus charge!” As far as anyone knows, Fortenberry hasn’t been charged with anything, though as Axios noted, his campaign did pay $25,000 to a white collar criminal defense firm in June.

After Axios’ report appeared, a spokesperson claimed that Fortenberry was raising money to pay off expenses incurred during an FBI investigation of Lebanese-Nigerian billionaire Gilbert Chagoury, who used straw donors to illegally funnel $180,000 to four different Republican candidates, including the congressman. The aide said that “no charges were filed against” Fortenberry, who “never saw or approved the language on that website.” (Chagoury agreed to pay a $1.8 million fine earlier this year but avoided jail time.)

Fortenberry doesn’t usually make much electoral news, since his 1st Congressional District isn’t normally competitive turf—though it will become a little bluer under the state’s new map, going from a 56-41 win for Donald Trump to a smaller 54-43 margin. The last time he was in the headlines, though, it was also for something bizarre: His chief of staff tried to threaten the job of a local professor who in 2018 “liked” a Facebook post featuring a photo of a Fortenberry campaign sign that had been doctored to give the candidate googly eyes and rename him “Fartenberry.”

PENNSYLVANIA 18TH CD — WPXI’s Rick Earle reports that state Rep. Summer Lee is “planning” to challenge Rep. Mike Doyle in next year’s Democratic primary, according to unnamed sources. Lee, an attorney and community organizer, has experience going up against Democratic incumbents: In 2018, she demolished state Rep. Paul Costa by a 68-32 margin and won the general election unopposed, making her the first Black woman from southwestern Pennsylvania to serve in the legislature.

Lee hasn’t yet spoken about a possible campaign against Doyle or why she might want to seek his ouster, though in her campaign against Costa, she ran with the support of the Democratic Socialists of America on a platform in favor of single-payer health insurance and opposed to fracking. She also argued that Costa, who’d first won office in 1998, had fallen out of touch with his district, calling him “a victim of the Democratic establishment because he was part of it.”