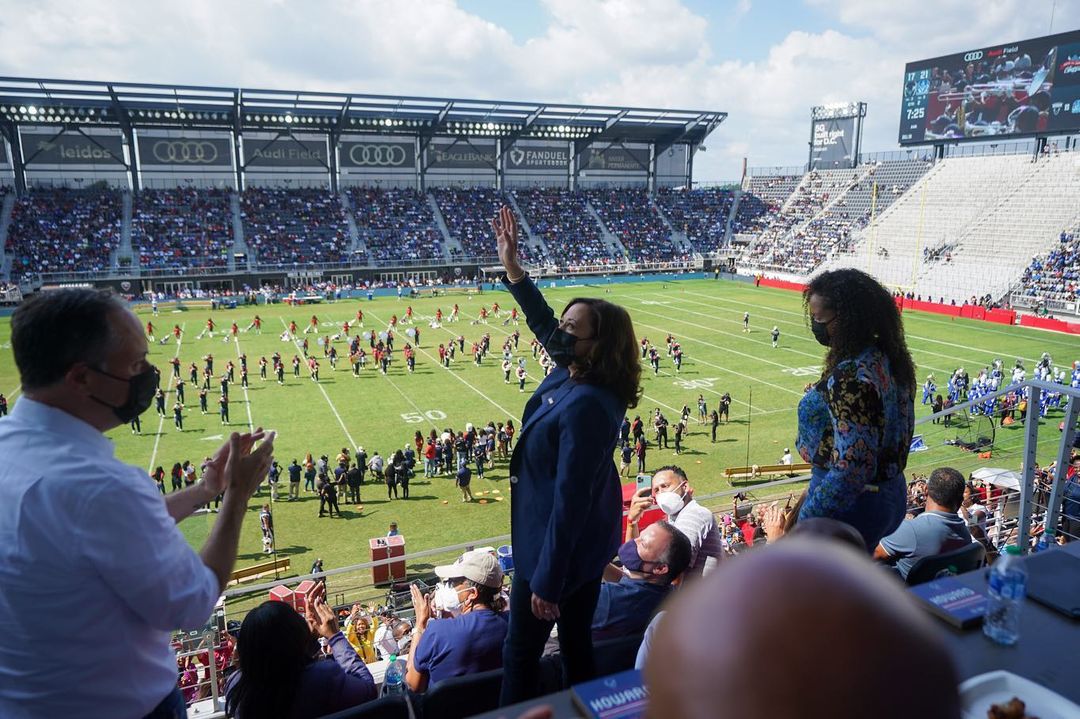 President Biden warned Monday that the U.S. may default its debt for the first time in history if Senate Minority Leader Mitch McConnell (R-KY) continues to block Democratic attempts to raise the federal borrowing limit, The Hill reports.

Said Biden: “I cannot believe that will be the end result because the consequences are so dire. But can I guarantee it? If I could, I would. But I can’t.”

“Joe Biden and Mitch McConnell’s two-man emergency hotline had gone silent — until now,” Politico reports.   “The Senate minority leader on Monday morning prodded the president to talk his party into raising the debt ceiling without the GOP, the first step in what may become a complicated back-and-forth. McConnell has warned for months that he won’t supply the votes to raise the nation’s borrowing limit even as the risk of a U.S. default spikes, and he reiterated in a new letter to Biden that he won’t help Democrats out of the jam.”

“Senate Majority Leader Chuck Schumer (D-NY) said on Monday that Congress needs to get a bill raising the debt ceiling to President Biden’s desk by the end of the week, an ambitious timeline given an entrenched stalemate between Democrats and Republicans,” The Hill reports.   Said Schumer: “Let me be clear about the task ahead of us: we must get a bill to the President’s desk dealing with the debt limit by the end of the week. Period.”

“After the drama of last week, Washington may feel like it’s due for a break. No such luck. On Oct. 18, the U.S. government will hit the debt limit, meaning the Treasury Department won’t be able to borrow more money to finance government operations. Right now, the issue is caught up in a partisan showdown that shows no signs of resolution,” Punchbowl News reports.

“We have some news on this as well: Last week, the Senate parliamentarian’s office privately provided both Democrats and Republicans with guidance about raising the debt limit via reconciliation. Under this process, Democrats could pass a debt-limit reconciliation package with only a majority vote, and they wouldn’t need any GOP support. This has been the approach McConnell has been calling for over the last two-plus months.”

“According to the parliamentarian’s office, Democrats could do this without impacting the existing reconciliation package. That legislation would stay on its own separate track and not lose its privilege in the Senate, meaning it can’t be filibustered and would only require a majority vote for approval. Democrats had been concerned that they could jeopardize that bigger bill by attempting to do a separate, debt-limit-only reconciliation bill, but that’s not the case, the parliamentarian said.”

“Sen. Kyrsten Sinema was confronted by proponents of the democratic Build Back Better bill who followed her as she entered a public restroom on Sunday morning,” the Arizona Republic reports.   “As of Sunday evening, the video had been watched more than 2.8 million times.”

The game of chicken Democrats played last week ended with both sides swerving at the last minute to avoid a disaster for President Biden’s agenda.

What the progressives won: The bipartisan infrastructure bill is now linked once again to the bigger budget reconciliation bill. Speaker Nancy Pelosi de-linked the bills last week and pushed hard to pass the bipartisan bill on its own. But with most Republicans refusing to back the bill, she could never find the votes in the Democratic caucus. More important for progressives, Biden also insists the two bills are linked again.

What the moderates won: The top-line number of the budget reconciliation package has been cut nearly in half, from $3.5 trillion to roughly $2 trillion. As a leading moderate told Politico: “I think the brilliant move was to make $1.9 to $2.2 the progressives’ number. They now embrace it. Progressives are with the president and Pelosi now at the reduced number.”

What both sides won: The new deadline for passing the bills has now been pushed until the end of October. With both sides showing their cards, the scope of the agreement narrowed and the White House now intimately involved in the negotiations, there’s a chance for Democrats to turn down the heat and negotiate the final details.

Most important for Democrats, the path seems a little clearer towards agreement after a very chaotic week.

“Many liberals don’t trust moderates. Key moderates no longer trust congressional leaders or the White House. And few in the House trust the Senate,” the Washington Post reports.   “As Democrats embark this week on their latest effort to save President Biden’s agenda, they are dealing with more than policy differences among their razor-thin majority.”

“The rival factions sparring over when and how to pass an upgrade to the country’s roads, bridges and Internet connections as well as an expansion of heath-care, education and climate change programs have made clear in recent days that the trust needed to get these policies into law has greatly eroded.”

Senate Majority Leader Charles Schumer (D-NY) urged Democrats to quickly coalesce behind the details of the budget reconciliation bill, The Hill reports.   Said Schumer: “It is crucial that the House, Senate and President come to a final agreement on the details of the Build Back Better Act as soon as possible, preferably within a matter of days, not weeks.”

“Jeff Sessions, the former attorney general, was another recent visitor. Tucker Carlson did his Fox News show from Hungary for a week this summer. The American Conservative Union is planning a version of its CPAC gathering in Budapest early next year.”

“Those are among the more visible recent fruits of a well-funded campaign by Mr. Orban in the United States that stretches back a decade and now stands as a case study in how governments around the world seek to shape policies and debates in Washington, sometimes raising concerns about improper foreign influence in U.S. politics.”

“Previously undisclosed financial records combined with local tax documents show that Svetlana Krivonogikh became the owner of the apartment in Monaco through an offshore company created just weeks after she gave birth to a girl,” the Washington Post reports.

“The child was born at a time when, according to a Russian media report last year, she was in a secret, years-long relationship with Russian President Vladimir Putin.”

During the outage, the unvaccinated deplorables got vaccinated, Trump conceded the 2020 election and announced he would not be running in 2024, and peace on Earth was declared. Sorry you missed it.

Jonathan Last points out that if the infrastructure and budget reconciliation legislation pending in Congress passes, none of the messiness will turn out to matter “because it’s process. And voters do not care about process. Ever.”

“Only two things will matter to voters:

Did the legislation pass?

Can they be convinced after the fact that the legislation made their own lives better in some tangible way?”

“Everything else is moot.”

New York Times: “As Democrats labor to keep Mr. Biden’s proposal on track in Congress amid deep internal divisions, a robust influence campaign is meeting it at every turn. Business groups are working in overdrive to fight large swaths of it, such as raising taxes on the wealthy and corporations; expanding Medicare to cover dental, hearing and vision services; and proposed taxes and fees to cut down on carbon emissions.”

“The effort is unfolding less conspicuously than previous lobbying pushes; pandemic restrictions have limited large gatherings of lobbyists at the Capitol, so the corridor outside the Senate Finance Committee’s office, which has long been known as ‘Gucci Gulch,’ is no longer overrun with shiny Italian shoes. But the campaign is proceeding as intensely as ever, via individual meetings, Zoom calls, fund-raisers and the airwaves.”

“A divided New York appeals panel has rejected President Donald Trump’s effort to dismiss or stall a lawsuit brought by a former Apprentice contestant who claims Trump sexually assaulted her a decade ago,” Politico reports.

“The appellate panel voted 3-2 to deny Trump’s bid to head off the suit from Summer Zervos, who says Trump kissed her, groped her breast and pressed his genitals against her in a Los Angeles hotel in 2007.”

Max Boot: “In the 1980s, when I became a Republican, the GOP took pride in describing itself as the ‘party of ideas.’ But under Trump’s leadership, Republicans have reclaimed their old reputation, dating back to the 1950s, as the ‘stupid party.’”

“What’s even more telling: This is not a source of shame or embarrassment for the party’s populists. They’re the stupid-and-proud-of-it party.”

“A senior State Department official is leaving his role in the Biden administration. And on his way out, he has sent a scathing internal memo criticizing the president’s use of a Trump-era policy to expel migrants from the southern border,” Politico reports.

Donald Trump’s “scorched-earth rally in Georgia last month… might have also strengthened the criminal case that Fulton County prosecutors could build against the former president,” the Atlanta Journal-Constitution reports.

“Four major access points that Jan. 6 rioters used to break into and overtake the U.S. Capitol had something unusual in common: They were among a dozen or so ground-floor windows and glass-paned doors that had not been recently reinforced,” the Los Angeles Times reports.

“The majority of the Capitol’s 658 single-pane windows were quietly upgraded during a 2017-19 renovation of the historic building. The original wooden frames and glass were covered with a second metal frame containing bomb-resistant glass.”

“But planners skipped about a dozen ground-floor windows, including some located in doors, because they were deemed to be low risk in the event of implosion, largely due to their discreet or shielded location, or because the building couldn’t structurally handle the load of the heavier frames.”

Former Trump adviser Steve Bannon told his podcast listeners he will have 20,000 “shock troops” on standby.   Said Bannon: “We control this country. We have to start acting like it.”

Politico: “For a panel that has worked briskly but methodically to gather records from federal agencies and scoop up voluntary testimony from friendly witnesses, the expected fight from Trump is likely to be the first test of its legal and political muscle.”

“Democrats call Mr. Cruz’s actions an abuse of the nomination process and the latest example of Washington’s eroding political norms. They also say he is endangering national security at a time when only about a quarter of key national security positions have been filled.”