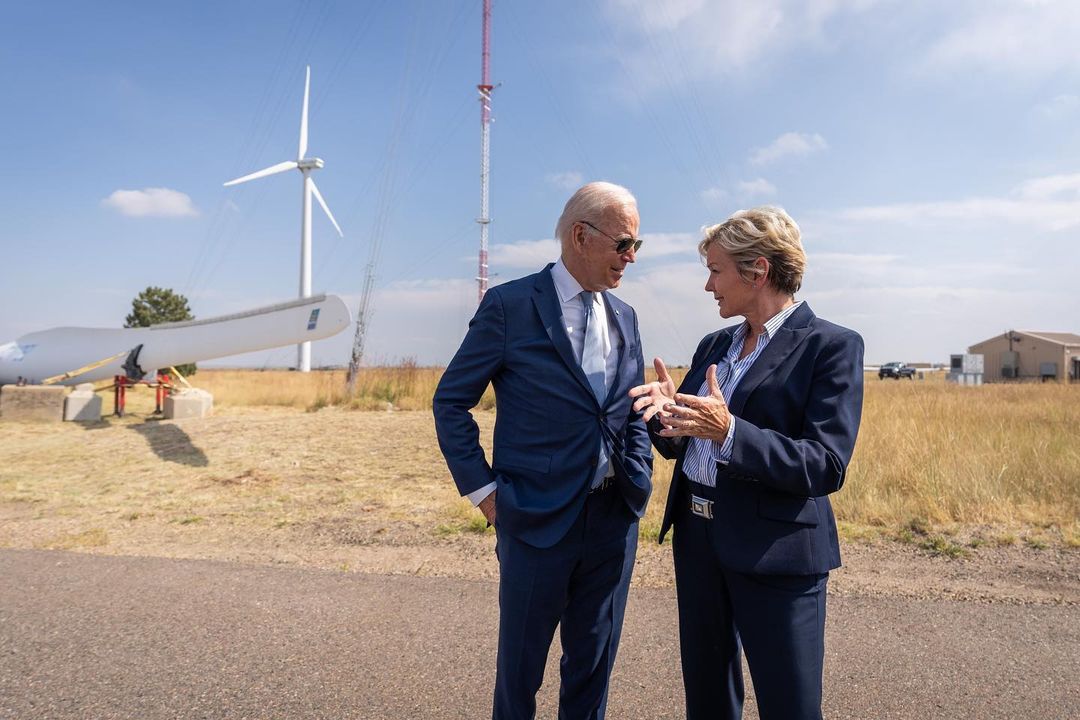 Fox News, employing its usual bipartisan polling team of the GOP outfit Shaw & Company Research and the Democratic firm Beacon Research, finds Democrat Terry McAuliffe leading Republican Glenn Youngkin 48-44 in its inaugural survey in the Virginia Governor’s Race, which is comparable to what other polls have shown.

Youngkin, meanwhile, is out with a commercial where he goes after a $1.4 million grant the McAuliffe administration awarded to a Chinese company that was supposed to bring jobs to Appomattox County but never did. Republicans used this story four years ago to try to bludgeon then-Lt. Gov. Ralph Northam during their unsuccessful campaign to keep him out of the governor’s office.

The third fundraising quarter of the year, covering the period from July to Sept. 30, has ended, and federal candidates will have to file campaign finance reports with the FEC by Oct. 15. But as per usual, campaigns with hauls they’re eager to tout are leaking numbers early, which we’ve gathered below.

PENNSYLVANIA GOVERNOR — The Republican primary picked up a new candidate on Friday when wealthy businessman Dave White jumped in, and Team Red’s field for what will be one of the most closely-watched gubernatorial races in 2022 is still far from settled. The Associated Press’ Marc Levy writes that “[p]erhaps the most-asked question among Republican lawmakers, donors and strategists is” whether state Senate President Pro Tempore Jake Corman, who leads the chamber, will run for this open seat, and Corman himself didn’t rule anything out when asked.

We’ll start with White, who previously served as a member of the Delaware County Council but lost re-election in 2017. A fellow Republican also failed to win an open County Council race that year, which gave Democrats their first-ever victories for this body since it was created in 1976. (Team Blue took the majority two years later in a large suburban Philadelphia county that has long been trending blue but where Republicans still held sway in local races.)

Despite his historic defeat, though, White may still be able to put up a real fight. Levy writes that the new candidate, who owns a “large plumbing and HVAC firm,” will self-fund $2 million and retains “strong connections to blue-collar labor unions.” Levy adds that White has been an influential figure in persuading building-trades unions to support Republicans and is “expected to have support from prominent party donors and fundraisers from southeastern Pennsylvania.”

Corman, for his part, was elected in 1998 to succeed his father in a central Pennsylvania state Senate seat, and he took over as the upper chamber’s leader last year. Corman, whom we hadn’t heard mentioned before as a potential candidate for governor, didn’t directly address his interest in running on Thursday, instead saying, “It’s crossed my mind that we need a good candidate, someone who can win.” Still, he acknowledged, “We’ll start talking about 2022 after” the Nov. 2 state and local elections are over.

Democrats, meanwhile, have anticipated for years that Attorney General Josh Shapiro will run without any serious intra-party opposition, and they may not need to wait much longer for his launch. On Sept. 27, the attorney general used a fundraiser to say he may have more to say in what Levy says was “the next couple weeks.”

NEW JERSEY GOVERNOR — Democratic Gov. Phil Murphy’s latest spot utilizes audio of Donald Trump and Republican foe Jack Ciattarelli each playing down the impact of COVID-19 on children, with Ciattarelli saying, “Children are not vulnerable to this virus.”

RHODE ISLAND GOVERNOR — Former Rhode Island Bridge and Turnpike Authority member David Darlington on Thursday became the first notable Republican to announce a bid for governor, but he may struggle to impress his own party’s power players. State Republican Chairwoman Sue Cienki told the Providence Journal’s Katherine Gregg that when she was asked to meet with him, “I didn’t know him, didn’t recognize the name at all until somebody jogged my head that he [had been] head of the turnpike authority and that he had a heart attack on air.”

Darlington, who unsuccessfully ran for the state legislature three times, also worked as a state GOP operative before serving in Gov. Lincoln Almond’s administration more than two decades ago. Almond appointed his ally in 2001 to the state Bridge and Turnpike Authority and he remained there until he stepped down in 2014 a year after he had a serious heart attack during a radio interview with former Providence Mayor Buddy Cianci.

Cienki told Gregg she met with Darlington Wednesday at a Panera Bread where she explained to the fledgling candidate, “​​You are going to have a primary. We have been working with someone else who wants to jump in.” That potential candidate appears to be state House Minority Leader Blake Filippi, who recently expressed interest in taking on Democratic Gov. Dan McKee.

ARIZONA GOVERNOR — Arizona gubernatorial candidate Kari Lake (R), who was endorsed by Donald Trump, said that she would not have certified Arizona’s 2020 election results if she was governor at the time.

Kari Lake (R), Donald Trump’s pick for Arizona governor, released a debut campaign ad focused on her wanting to “take a sledgehammer” to the media.

CNN: “Murkowski took aim at her would-be GOP challenger, Kelly Tshibaka, over the candidate’s ties to Alaska in an interview with CNN, an opening salvo in what could emerge as the most high-profile proxy war between Senate GOP Leader Mitch McConnell and former President Donald Trump in next year’s midterms.”

“Murkowski alluded to a state investigation into whether Tshibaka illegally obtained a fishing license for a sportfishing event in 2019 because she had not lived in the state for the previous 12 months.”

Said Grisham: “I am terrified of him running for president in 2024. I don’t think he is fit for the job.”

Grisham said a second term for Trump would mean a president driven by “revenge” for his political adversaries.

“As turmoil in Afghanistan reached a crescendo in August, Donald Trump began talking again with advisers about whether he should announce his 2024 campaign for president right away,” the Washington Post reports.

“They responded by urging patience, according to three people familiar with the discussions, who like others spoke on the condition of anonymity because they were not authorized to speak publicly. An announcement would force a reshuffling of his newly formed fundraising apparatus, advisers argued, and could complicate his ability to appear on broadcast television without triggering equal time rules.”

“Some of his advisers were concerned that Democrats might use his announcement in their effort to frame the midterm elections around his candidacy, potentially boosting their own turnout and hampering his plans if Republicans fall short next year.”

Said Trump: “If I faced him, I’d beat him like I would beat everyone else.”

UTAH U.S. SENATOR — Evan McMullin, who won more than 21% of the Utahns’ votes for president in 2016, will challenge Sen. Mike Lee (R-UT) as an independent candidate for Utah’s Senate seat next year, the Salt Lake Tribune reports.

“A number of states have proposed or finalized new congressional district maps in the past week. The recurrent theme: protecting incumbents rather than expanding majorities,” Axios reports.

“The flurry of activity is just the start of the high-stakes process that has the potential to affect congressional power for a decade. The biggest states are still to come — as well as deadlines, lawsuits and the potential for lots of court-drawn midterm maps.”

OHIO REDISTRICTING — In a very strange development, Ohio’s Republican-run legislature has ceded control of congressional redistricting to a so-called “backup” commission by missing a Sept. 30 deadline to pass new maps set in the state constitution.

Given how jealously lawmakers everywhere protect their power, it’s necessary to ask why Buckeye Republicans have voluntarily relinquished it in this case. And while state Senate President Matt Huffman claimed that staffers had been too preoccupied with legislative remapping to draw up new congressional lines, there’s a likelier explanation that’s far more cynical.

Under state law, if lawmakers fail to approve a congressional plan, responsibility is handed over to a panel made up of the governor, state auditor, secretary of state, and four legislative appointees, one from each chamber’s party leader. That commission, which has exclusive jurisdiction over legislative redistricting, has a 5-2 Republican majority, which already passed an extreme set of gerrymanders for the state House and Senate.

So why punt to the backup commission when Republicans are already in charge of the legislature? Under a feeble reform passed in 2018, congressional maps passed by legislators require a three-fifths supermajority and the support of at least half the members of each party. There’s a way around this, though. The commission must also muster bipartisan support for any such maps, but if it fails to do so by Oct. 31, the task reverts back to lawmakers, who can then pass a map that’s good for a full 10 years with the backing of just one-third of Democrats—or they can approve one without any Democratic support that will last for four years.

That final option may in fact be the most desirable, because it would allow Republicans to fine-tune their gerrymanders after just two elections. In fact, that’s exactly what transpired when the commission drew up legislative maps: The GOP majority failed to win the votes of the two Democratic members, likewise leading to a four-year map under a similar provision of the constitution.

And even if Republicans don’t exercise the chance to go it alone, the mere fact that they can gives them leverage over Democrats to pressure them into accepting a slightly more modest but still durable 10-year gerrymander. Whatever winds up happening, it’s advisable to be very skeptical of the GOP’s motives.

INDIANA REDISTRICTING — Indiana Republicans passed new congressional and legislative plans on Friday that will lock in wide majorities as soon as GOP Gov. Eric Holcomb signs them. But while the new maps preserve the apparent status quo, progressives shouldn’t breathe a sigh of relief, because that status quo is already badly gerrymandered.

The House map is particularly instructive. Based on past election results, the redrawn districts are all but certain to send seven Republicans and two Democrats to D.C., giving the GOP 78% of the state’s congressional delegation despite the fact that Donald Trump won Indiana by a 57-41 margin in 2020. That certainty is only possible, though, because of the way Republicans manhandled the 5th District in the Indianapolis suburbs, which Trump carried by a narrow 50-48 margin last year, and which Republican Rep. Victoria Spartz won by a similarly close 50-46 spread.

How to prevent another tight race? Simple: strip out the bluer areas closest to Indianapolis and replace them with rural red turf far from the city. By doing so, the 7th would have voted for Trump 57-41 under the new lines, according to Dave’s Redistricting App—the same as his statewide performance, which would put the district well out of reach for Democrats. Former state Rep. Christina Hale, who lost to Spartz last year, recently declined a rematch as a result, saying, “We probably won’t see a real race for a number of years.”

Some Democrats were nonetheless consoled that Republicans didn’t try to dismantle the 1st District, held by freshman Democratic Rep. Frank Mrvan. But they did make it a touch redder—53-45 for Joe Biden instead of 54-45—and the trends in northwest Indiana have not been favorable for Democrats: In 2012, Barack Obama carried the 1st 61-37. Yet even if Mrvan hangs on for years to come, there’s little solace to be found in a severe gerrymander that somehow falls short of maximum awfulness.

That’s buttressed by the GOP’s legislative maps, which will keep the party firmly entrenched. Redistricting expert Christopher Warshaw called the new state House map “one of the most extreme gerrymanders in history,” and according to an analysis from PlanScore, Republicans would be likely to win 78% of all seats in the Senate and 69% in the House.