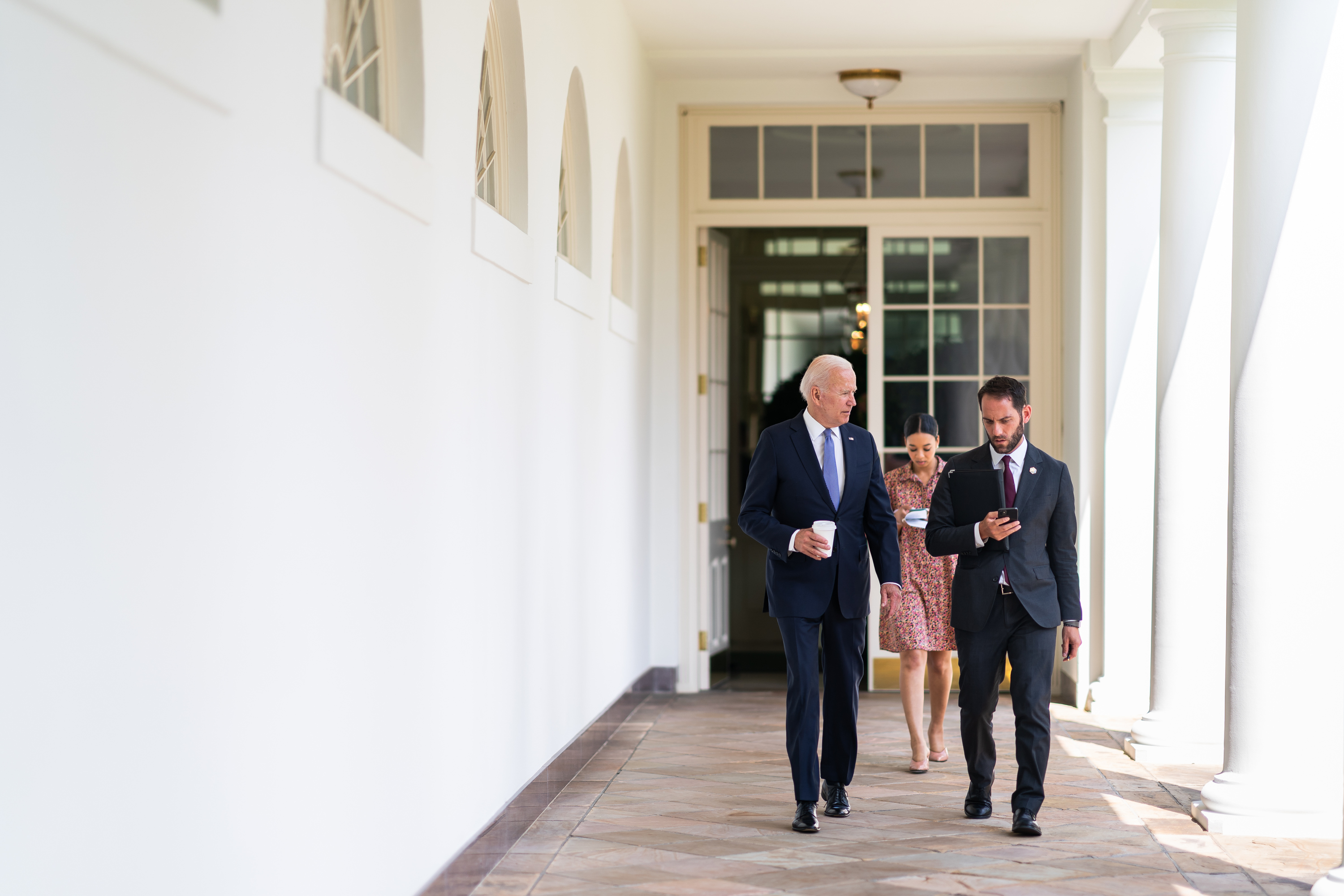 The first redistricting proposals are coming in and while the maps are not final, they are an early indicator of how Republicans are approaching the redrawing process.

David Wasserman notes that Republicans are showing surprising restraint in states like Georgia, Indiana, and Texas and focusing on incumbent protection instead of squeezing Democrats out of their districts.

It will be interesting to see if Republicans in Florida and North Carolina take the same path.

Many states where the GOP controls the redistricting process already have extreme gerrymanders. In addition, blue-trending suburbs are constraining the GOP’s ability to create new seats.

But the most important question on redistricting is whether Democrats in states like Maryland, New York, and Illinois show the same restraint — or whether they try to run up the score to defend their very slim majority in the House.

The answer could decide control of Congress.

Peter Nicholas: “A faint but discernible note of alarm has been slipping into Democrats’ chatter about the 2022 and 2024 elections. President Joe Biden’s approval ratings have slumped to their lowest levels since his inauguration. His governing coalition is splintering over the Haitian migrant crisis. Many Democrats view the legislation moving through Congress this week as a defining test of whether they can marshal their congressional majority and pass something that most Americans want.”

Said former Sen. Tom Daschle (D-SD): “You’ve got an imperative here that requires the Democrats to deliver. Their survival depends on it.”

“Biden seems to be playing a longer game. He’s working to pass the infrastructure plan, but the White House considers subduing the pandemic its overriding mission. He hopes to forge a sunnier future from this past summer’s wreckage of soaring case rates, hospitalizations, and deaths. The pandemic news is bleak. But the administration’s recent actions could nevertheless seed a turnaround. Offices that went dark as COVID-19 swept the country could again fill with employees who have gotten vaccines either on their own or because Biden’s mandates gave them little choice. Young children will soon be eligible for shots that will protect them inside the classroom and out. Starved for new hosts, the Delta variant will eventually recede. Biden is prepared to be patient; the trouble is, many in his party are not.”

NORTH CAROLINA — A new High Point University survey finds President Biden with a dismal 38% to 48% approval rating. Key finding: 60% of respondents said the U.S. is on the wrong track.

Jonathan Bernstein: “We know, for example, that many voters don’t pay attention to much of what politicians say, and have short memories about what they do notice. Even big deals, such as the major bills Congress is acting on right now, get ignored; indeed, many voters this summer failed to recognize that the current Congress (and President Joe Biden) had delivered anything to them despite the stimulus checks that they had received.”

“Most voters aren’t up for grabs because of partisan polarization. For the rest, fundamentals such as peace and prosperity, or their absence, tend to be extremely important, either directly or mediated through their opinion of the current president. (That is, if things are going well, people tend to like the president, and that drives their votes). All the rest — policy positions, speeches, clever ads, the candidates’ personalities — only matter on the margins. Of course, elections can be won or lost on the margins! During campaigns, it makes sense to maximize everything a candidate can maximize. But most of it just doesn’t matter much.”

“It’s also not as easy as it might seem to succeed by supporting policies that poll strongly. That’s because even high-quality survey research is limited in value by the fact that most of citizens don’t think much about most policy questions, which makes their views on them not very strongly held.”

A new Pew Research survey finds there has been a 22 percentage-point drop since March in the share of Republicans who think it is very or somewhat important that federal law enforcement agencies find and prosecute those who broke into and rioted at the U.S. Capitol on January 6 (from 79% to 57%).

NEW YORK GOVERNOR — New York City Public Advocate Jumaane Williams, who’d previously said he was considering a bid against Gov. Kathy Hochul in next year’s Democratic primary, announced the formation of an exploratory committee on Tuesday and said he would make a final decision “in the next month.”

New York Times: “Barely a month after she unexpectedly ascended to the governor’s office after Andrew Cuomo’s resignation, Ms. Hochul is quietly revving up an aggressive fund-raising apparatus, seeking to build a formidable financial advantage — at least $10 million in donations by year’s end and as much as $25 million by next summer, donors and advisers say — to discourage or defeat potential rivals in what may be a fierce Democratic primary next year.”

“The governor’s political ramp-up, which has involved hiring a campaign manager and other senior aides, has not gone unnoticed.”

Two districts, the 1st and 3rd in Portland, would stay safely blue: The former would have gone for Joe Biden 68-29 and the latter 73-25; under the old lines, Biden won them 63-34 and 74-24 respectively. By contrast, the sprawling 2nd, which covers the entire eastern part of the state, would remain solidly Republican, going 61-37 for Donald Trump as opposed to 56-42 in its previous version.

The remaining three districts would all lean Democratic, though not to a great degree. The 5th District, currently represented by Democratic Rep. Kurt Schrader, would become a touch redder, shifting from 54-44 Biden to 53-44, and in fact would have voted for Republican Knute Buehler 52-47 in the 2018 race for governor, according to calculations from Dave’s Redistricting App.

Democratic Rep. Peter DeFazio’s 4th District along the state’s southwestern coast, meanwhile, would get bluer: After a close 51-47 win for Biden under the old lines, the president would instead have carried it 55-42 using the new map. Oregon is also getting a brand-new district in the Portland area, the 6th, which would have gone for Biden 55-42. Of course, there’s no old district to compare this one to, though it’s worth noting that Brown would have lost it 49-46 in her 2016 special election and only taken it by a slim 49.5-49.3 margin two years later.

Interestingly, a larger portion of the new 6th is made up of the old 5th compared to the new 5th: 50% of the 6th is drawn from the previous 5th District, amounting to about 420,000 people, while only 39% of the updated 5th, or 330,000 people, come from the prior iteration of the district. Schrader’s hometown of Canby, though, remains in the 5th, so he’s very like to run there. (Every other district on the new map is formed largely from its predecessor of the same number.)

In a difficult year for Democrats, therefore, the 5th could potentially flip to the GOP, and perhaps the 6th or even the 4th in a big enough wave. If things go right for the party, though, it’ll secure a 5-1 advantage in the state’s delegation, up one from the current 4-1 arrangement. As for the legislative maps, those will also lock in the Democrats’ current majorities, though it would likely be difficult for them to win the two-thirds supermajorities that would prevent Republicans from staging future quorum-busting boycotts.

GEORGIA REDISTRICTING– Republicans in the Georgia state Senate have released a draft congressional map that would make Democratic Rep. Lucy McBath’s 6th District redder while shoring up neighboring 7th District Democrat Carolyn Bourdeaux. Lawmakers won’t take up any proposals, however, until they reconvene on Nov. 3, and other GOP leaders may have different gerrymanders in mind.

OHIO U.S. SENATOR — A new internal poll of the GOP primary from WPA Intelligence for former state Treasurer Josh Mandel finds Mandel leading venture capitalist J.D. Vance 37-13 for the nomination. That’s little changed from a July WPAI survey, taken on behalf of the Club for Growth, that had Mandel ahead 40-12.

PENNSYLVANIA U.S. SENATOR — Reality has come home to political consultant Craig Snyder, who launched a campaign for the GOP Senate nomination for Pennsylvania in July by positioning himself as an explicitly anti-Trump Republican: On Monday, Snyder dropped out of the race, saying “he has been unable to generate enough support.”

OREGON GOVERNOR — State Treasurer Tobias Read entered Oregon’s open-seat race for governor on Monday, making him the second prominent Democrat to do so. Read, a former footwear developer at Nike, served a decade in the state House before winning his current post in 2016 by defeating Republican Jeff Gudman 44-41; he beat Gudman by a wider 52-42 in a rematch last year. In his kickoff, Read emphasized the need for mandatory student vaccinations to ensure safe schools once COVID shots are approved for those under 12.

The first big-name Democrat to announce a bid to replace term-limited Gov. Kate Brown was state House Speaker Tina Kotek, who launched her campaign at the end of last month but has been embroiled in a major battle over new maps. Several other notable candidates could still join the primary, including state Attorney General Ellen Rosenblum.

P.S. While Oregon holds elections for governor and labor commissioner in midterms, it elects its attorney general, secretary of state, and treasurer in presidential years.

RHODE ISLAND GOVERNOR — State House Minority Leader Blake Filippi says he is “undecided” about a possible gubernatorial bid but tells WPRI’s Ted Nesi he will decide in the fall. Nesi also reports that Filippi is “under pressure to enter the race” from fellow Republicans, who have yet to land a notable candidate.