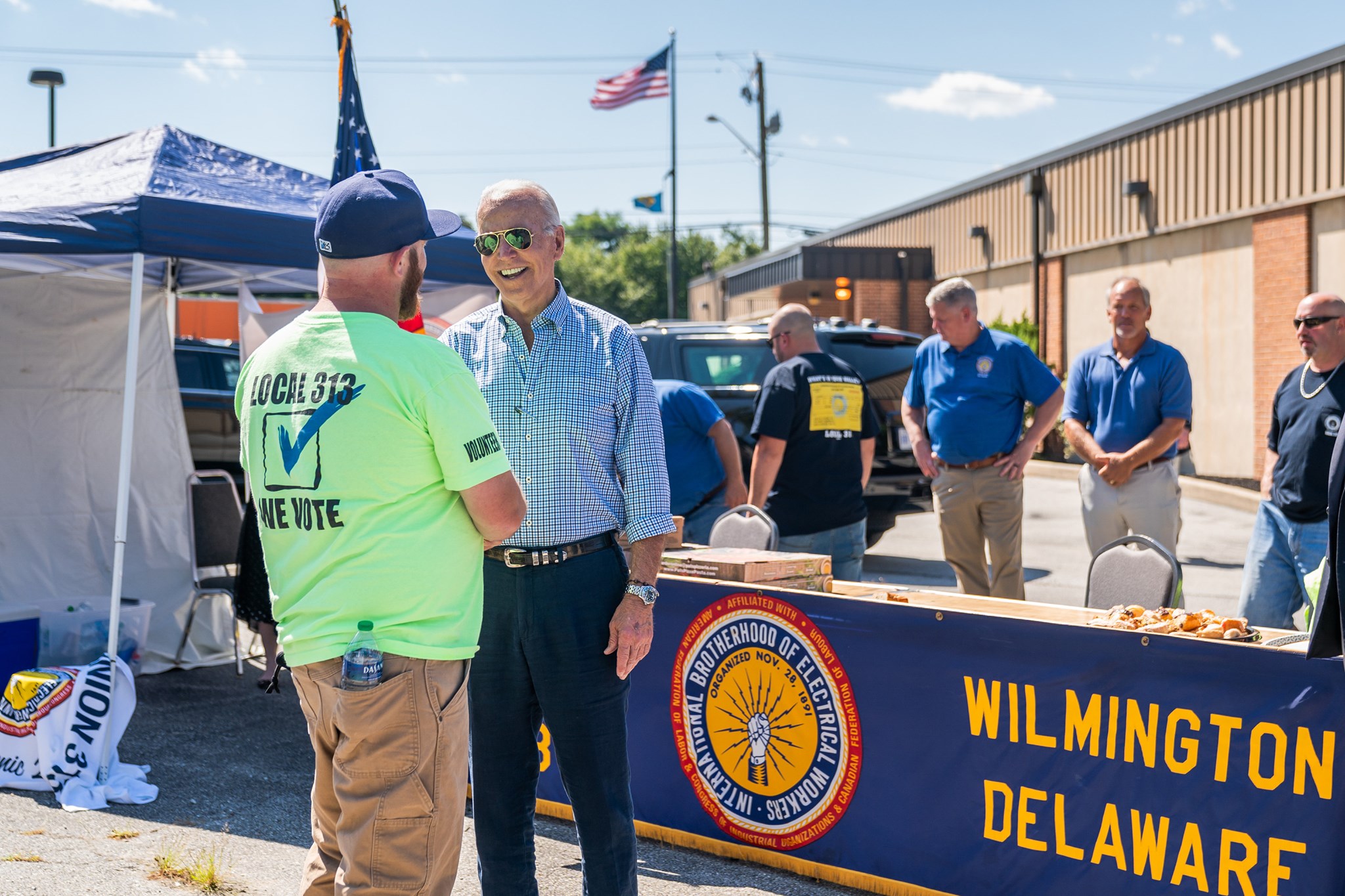 Pfizer and BioNTech on Tuesday submitted initial data on their coronavirus vaccine for children aged 5 to 11 to the U.S. Food and Drug Administration, Axios reports.

Gallup: “A steady 55% of parents in the U.S. with children under 12 say they would get their child vaccinated against the coronavirus if such a vaccine were available.

TEXAS GOVERNOR — While Axios reported earlier this month that former Democratic Rep. Beto O’Rourke was “expected” to run for governor, the 2018 Senate nominee said Friday he was still considering. When the Texas Tribune asked him for a timeline, O’Rourke said, “It won’t be in a week, but it’ll be some time in the near future.”

Meanwhile, actor Matthew McConaughey recently said that he was also still considering challenging Republican Gov. Greg Abbott, though McConaughey once again didn’t indicate which party, if any, he’d run with.

MICHIGAN 6TH CD — Longtime Rep. Fred Upton recently told CNN that he would wait for the redistricting process to conclude before deciding whether he’d seek re-election. Donald Trump earlier this month endorsed state Rep. Steve Carra’s primary bid against Upton, who is one of the 10 Republicans who voted for impeachment in January, but the incumbent insisted that will have nothing to do with his 2022 plans.

NEW JERSEY 11TH CD — Insider NJ reports that former Kinnelon Councilman Larry Casha has sent letters to local county GOP leaders saying that he plans to run against Democratic Rep. Mikie Sherrill and will announce next month. Casha briefly campaigned for this North Jersey seat last cycle but dropped out after tax attorney Rosemary Becchi reached a deal with power brokers that resulted in her running here rather than against party favorite Tom Kean Jr. in the neighboring 7th District.

“Donald Trump’s letter to Texas Gov. Greg Abbott (R) demanding he pursue an ‘audit’ of the 2020 election set off a ‘mad dash’ in the governor’s office as aides sought to figure out just how serious the former president was,” Politico reports.

“The scramble among Abbott’s team to placate the president illustrated the degree to which Trump and his election conspiracies continue to set the rules of engagement for virtually all other GOP elected officials.”

“The law will require California voters to vote twice for U.S. Senate candidates — once to fill the remaining months of Harris’s term, between the November 8 midterm elections and the beginning of the next Congress, in January 2023, and once for a full six-year term that begins in January.”

CALIFORNIA UNIVERSAL VOTE BY MAIL — “California’s pandemic-inspired move toward mailing a ballot to every registered, active voter will become a permanent part of the state’s political landscape, an embrace of an extended and flexible voting process instead of the traditional focus on a single day of voting in person,” the Los Angeles Times reports.

“Gov. Gavin Newsom’s signature Monday on Assembly Bill 37 makes California the eighth state in the nation with a law on the books requiring every voter to be mailed a ballot. The new law is part of an evolution of voting in the state over the last two decades, an effort to provide voters more options for when and where to cast their ballots.”

GEORGIA — “Donald Trump is escalating his fight against Republican Gov. Brian Kemp of Georgia, and state Republicans fear it will give Democrats a stronger foothold in the key swing state as next year’s midterm elections loom,” CNN reports.

“The former President’s criticism of Kemp now includes hyping Democrat Stacey Abrams as a preferable alternative to the GOP governor, whose crime against Trump was staying out of his attempt to overturn the Georgia 2020 election returns.”

“It’s a scenario the president and his aides and close allies increasingly view as a real possibility, given tightening poll numbers in the race and signs of Democratic apathy. The White House, Democratic National Committee and outside partners are closely coordinating their efforts and speaking almost daily… Just over a month before Election Day, they are planning to ramp up activity and engagement — in addition to the $5 million the DNC has already budgeted for Virginia.”

Two new polls of Virginia’s gubernatorial race show a continued lead for Democrat Terry McAuliffe. Monmouth University puts McAuliffe up 48-43 on Republican Glenn Youngkin, virtually unchanged from his 47-42 advantage last month, while Democratic pollster Global Strategy Group has T-Mac ahead 48-45. The GSG survey was taken for a group called Power for Tomorrow, which describes itself as “a nonpartisan organization advocating for energy policies focused on ensuring consumers are protected through sensible regulation of electric companies.”

McAuliffe is also airing two new negative ads targeting investments made by Youngkin’s private equity firm, the Carlyle Group, while he served as co-CEO, mostly using news clips. The first focuses on a chain of dental clinics accused of “preying on unsuspecting poor families” by performing “unnecessary procedures on children.” (After a scathing Senate investigation, the company was kicked out of Medicaid and shuttered in 2015.) The second charges Youngkin with cutting staff at a nursing home chain to increase profits, which predictably led to the neglect of patients.

Youngkin responded by claiming that at the time in question, he “led Carlyle’s team in London and then worked on a totally different fund, so he was not involved in these businesses at all.” The spots are both reminiscent of ads that Barack Obama ran to great effect against another private equity magnate, Mitt Romney. Romney’s team tried to similarly deflect by focusing on his firm’s other investments, to no avail.

TEXAS REDISTRICTING — Texas Republicans released a draft congressional map on Monday that represents an extreme partisan gerrymander designed to insulate GOP incumbents from increasing diversification and hostility from suburban voters. While lawmakers (at least in this iteration) did not opt to aggressively target Democratic-held districts, as some had forecast, the plan nonetheless locks in an outsize Republican advantage that would all but assure the party of winning at least 63% of House seats despite the fact that Donald Trump carried the state just 52-46 last year. You can find data files for the proposed map here.

The proposal does so in large part by grafting rural red areas on to suburban seats that are otherwise trending away from the GOP. A good example is the 24th District, which is currently located in the Dallas-Fort Worth suburbs and hosted the closest race in the state last year, won 48.8 to 47.5 by Republican Beth Van Duyne. Joe Biden carried the 24th 52-46, but under the new GOP map, it would have voted 55-43 for Donald Trump, according to Dave’s Redistricting app. This transformation is accomplished by excising the most Democratic-leaning and heavily Latino precincts in the city of Irving and adding further-flung regions that are whiter and more Republican. As a consequence, the district’s eligible voter population would leap from 59% white to 74% white.

Overall, there would be 23 safely Republican seats and one that tilts toward the GOP—the 23rd in the state’s southwest, a traditionally swingy district now represented by freshman Rep. Tony Gonzalez. By contrast, the map would create 12 safe Democratic districts, with one seat leaning the party’s way: Rep. Henry Cuellar’s 28th, based in South Texas. One Democratic seat, the 15th, would flip from 50-49 Biden to 51-48 Trump and would be the state’s lone toss-up district, though Democratic Rep. Vicente Gonzalez might instead choose to seek re-election in the neighboring (and bluer) 34th District, where fellow Democrat Filemon Vela is retiring. (Both are heavily Latino districts, also in South Texas.)

Due to its considerable population growth, Texas is also adding two new districts in reapportionment. One new seat, numbered the 37th District, is a dark blue Democratic vote-sink in Austin, while the 38th District is on safely Republican turf in the Houston suburbs. Notably, though, despite the fact that almost all of that growth was among people of color, the GOP’s map adds no new Latino districts and in fact weakens two of them—the 15th and the 23rd.

The latter in particular could be the subject of litigation under the Voting Rights Act: By reducing the Latino proportion of the eligible voting-age population from 63% to 58%, map-makers risk creating a district with a majority-white electorate that would prevent Latino voters from electing their preferred candidates. (Latino voters typically turn out at lower rates than their white counterparts.) Democratic election lawyer Marc Elias in fact already threatened to bring just such a suit, but the Supreme Court’s hostility to VRA litigation poses a serious obstacle.

It’s always possible that these lines could be tweaked before final passage, though the Texas Tribune’s Abby Livingston says that unnamed GOP sources tell her that every Republican member of the state’s congressional delegation has given their approval to this plan. It’s therefore likely that this is the map that will become law and, barring unlikely criticism from an extremely conservative federal judiciary, be used in elections for the next 10 years.

FLORIDA GOVERNOR — Former state Rep. Sean Shaw, who in May didn’t rule out his own bid for governor, has endorsed Rep. Charlie Crist in the Democratic primary. Shaw was the Democrats’ 2018 nominee for state attorney general.

MICHIGAN GOVERNOR — According to MLive’s Emily Lawler, RNC chair Ronna Romney McDaniel says she “considered running for governor herself” but “is now focused on” unseating Democratic Gov. Gretchen Whitmer. In April, McDaniel had declined to rule out a bid, but now it sounds like she finally has, given the past-tense use of “considered.”

MINNESOTA GOVERNOR — Former state GOP chair Jennifer Carnahan told WCCO last week, “I don’t see my name being on the ballot in 2022 in Minnesota,” despite Carnahan’s own claim earlier this month that “thousands” of people had asked her to run for governor. Carnahan, who resigned in disgrace as party chair in August, also did not file by the Friday night deadline for the contest to get her old job back, a race that will be decided by Republicans leaders on Oct. 2.

OHIO 11TH CD — Former state Sen. Nina Turner, who lost last month’s Democratic primary to run in the special election for Ohio’s 11th Congressional District, has filed paperwork with the FEC for a possible rematch. An unnamed former staffer for Turner says she “has not made any decision,” though in a new interview, Turner didn’t rule out a second bid, saying, “I got all options on the table.” Cuyahoga County Councilwoman Shontel Brown defeated Turner 50-45 for the Democratic nomination in this dark blue district, though the general election is not until Nov. 2.