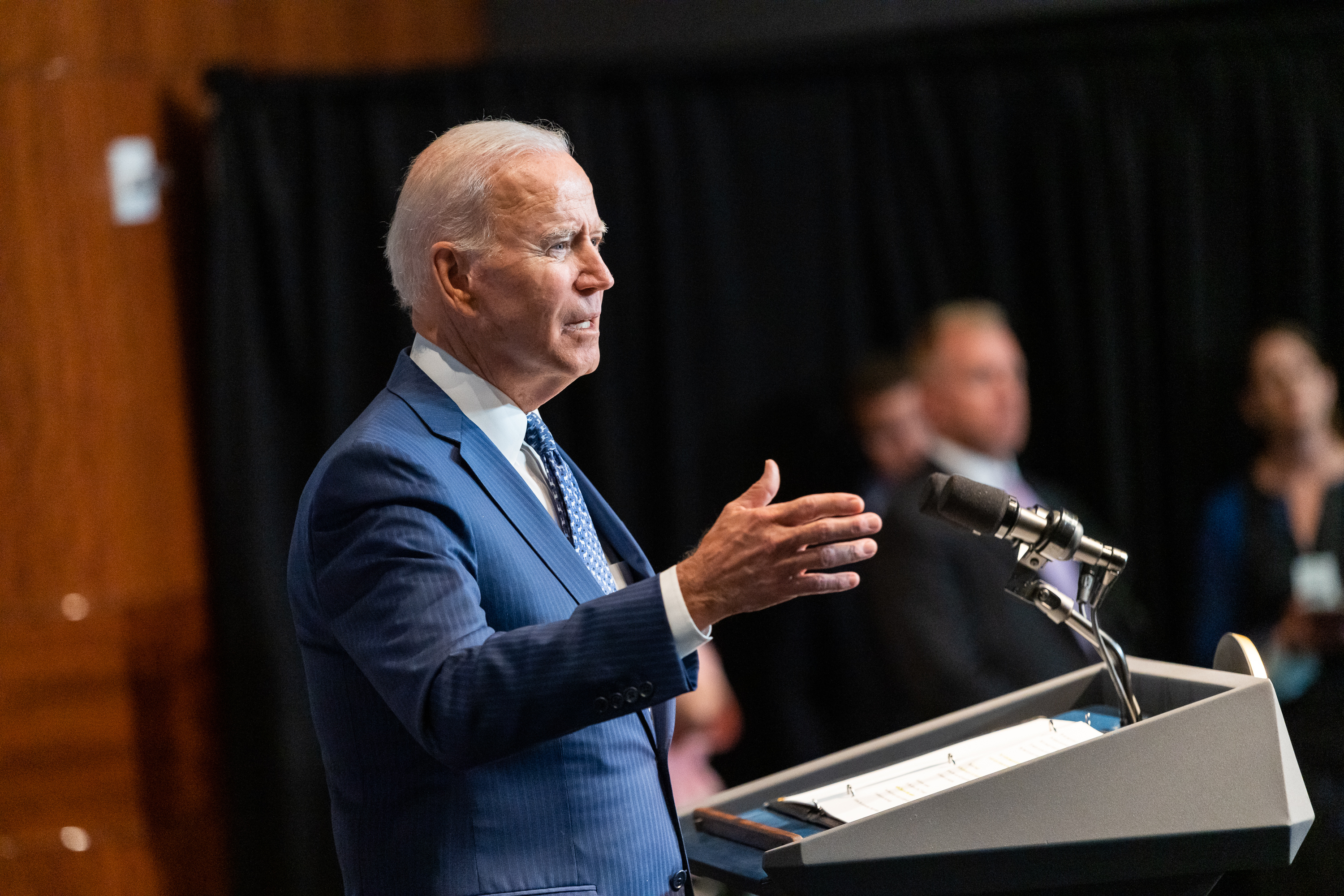 A range of potential electorate scenarios shows McAuliffe ahead by anywhere from 3 points (48% to 45%) to 7 points (50% to 43%) depending on the likely voter model. Youngkin does better when more low-propensity voters are included in the mix.

Specifically, McAuliffe has a lead among voters who have cast ballots in every general election since 2016 (51% to 44%) and those who participated in 4 of the last 5 general elections (49% to 43%). Among those who voted in only 2 or 3 elections and are considered less reliable voters, the race is much closer (44% for McAuliffe and 42% for Youngkin).

McAuliffe recently launched a commercial featuring a trauma surgeon taking Republican Glenn Youngkin to task for opposing vaccine mandates for healthcare workers and mask requirements in schools, and Youngkin quickly responded with an ad featuring a doctor vouching for him. Physician Peter Zedler declares that Youngkin “believes vaccines save lives and is the only candidate with a TV ad encouraging Virginians to get the COVID vaccine,” though he doesn’t mention the candidate’s opposition to mandates.

Jonathan Bernstein: “Whatever some pundits are speculating, President Joe Biden may rebound from his current slumping approval ratings. Biden is currently at around 46% approval. The last four presidents to win re-election all hit lower marks later in their first terms: Barack Obama was at 42% well into his second year; George W. Bush fell to 44% halfway through his fourth year; Bill Clinton was at 42% near the end of his second year; and Ronald Reagan reached 35% at the beginning of his third year.”

“When a president is doing badly, his weaknesses are readily apparent and ambiguous traits get interpreted as negative ones. In early 1983, pundits focused on Reagan’s factual errors and lack of command of policy details. Those flaws were no less real when things went better in the next two years. What appeared in 1984 and 1985 as resolve and toughness was, in 1982 and 1983, stubbornness and refusal to change when things were going badly.”

“The U.S. Senate candidate’s insistence that Arizona cancel the results of its free and fair election continues his promotion of the false notion that the 2020 election was stolen from former President Donald Trump.”

“Greitens and other Missouri Republican candidates are courting hard-right primary voters and have all played some role in either perpetuating baseless claims of voter fraud or indulging those who believe Trump won the election. But Greitens has been the most aggressive, traveling to Arizona and securing the endorsement of a far-right Arizona state senator close to the review.”

If you watched Donald Trump’s recent interview with One America News, you’ll quickly realize there’s a storm brewing in this country.  Trump ranted again the “stolen” election and claimed — again with zero evidence — that “vicious” Democrats were cheating on elections.  But he also escalated his rhetoric: “They’re destroying our country. Our country will not survive this. Our country will not survive.”   This is not normal political discourse. It’s actually a grave threat to our democracy.

But as Brian Stelter notes, news outlets need to be providing “storm warnings” — but many are ignoring the threat.

An example:  “When the authors of Peril revealed that a Trump lawyer wrote a coup memo, a six-part plan to keep Trump in power, some news outlets ignored it. The memo came out days ago, but networks like NBC, ABC, CBS, the nightly newscasts of record, they didn’t deem it newsworthy. The only NBC program to mention the Trump coup this week was — Late Night with Seth Meyers. And to Seth’s credit, he covered it well. But the newscast did not cover it.

Look, I get that there’s a lot going on. But a slide toward autocracy should merit some air time. The same goes for the Arizona audit results. First, Trump blamed the media, but now he is literally claiming the audit showed he won — even though it showed he lost. And everybody should have seen this coming, right? One humiliation simply led to new lies and new conspiracy theories, and now more calls for more audits in more states, because there are broken incentive structures in place, a broken GOP media pushing those incentives, thus a broken GOP, thus broken politics.”

News outlets that treat stories like this as normal politics — mainly because they want to appear “objective” — are actually part of what’s wrong.  Averting your eyes to the growing storm on the horizon will not make it go away.

After Donald Trump attacked Georgia Gov. Brian Kemp (R) at his rally over the weekend for not helping to subvert the 2020 election, the statewide Georgia Republican candidates endorsed by Trump all declined to defend Kemp, the Atlanta Journal Constitution reports.

“Republicans spent tens of millions of dollars in 2020 to keep Democrats from painting more of Texas blue. Now, the GOP is trying to fireproof its districts with a new map that contains the suburban damage they’ve suffered,” Politico reports.

“While the precise boundaries are still being finalized, the new map is likely to shore up all of the state’s GOP incumbents by packing Democrats together in three new deep-blue seats in the biggest metro areas: Austin, Houston and Dallas.”

Abby Livingston: “My very very first takeaway from the Texas redistricting map: This is a map drawn for incumbent protection more than anything else.”

WYOMING AT LARGE CD — Harriet Hageman (R), who was endorsed by Donald Trump in her challenge to Rep. Liz Cheney (R), called Trump “the weakest candidate” in the 2016 Republican primary and referred to him as “somebody who is racist and xenophobic,” the New York Times reports.

“Ms. Hageman’s yearslong journey from Never-Trumpism to declaring him the best president of her lifetime is one of the most striking illustrations yet of the political elasticity demonstrated both by ambitious Republicans in the Trump era and by the former president himself, who has relentlessly asserted his dominance over leaders of his party.”

Bass’ entry makes her the most prominent candidate to campaign to succeed termed-out Mayor Eric Garcetti, who is President Joe Biden’s nominee to become ambassador to India, in this heavily Democratic city. The California assemblywoman made history in 2008 when she became the first Black woman to lead any of the nation’s 99 state legislative chambers, and she won an open seat in Congress two years later without any serious opposition. Her profile rose further in 2020 when Biden seriously considered her as his running mate, though the post ended up going to another California Democrat, Sen. Kamala Harris.

Bass has the opportunity to again make history as the first woman elected to lead Los Angeles, as well as its second African American mayor following the legendary Tom Bradley, but she would need to get past a number of opponents first. City Attorney Mike Feuer, City Councilman Joe Buscaino, and real estate broker Mel Wilson have been running for a while, while Central City Association head Jessica Lall and City Councilman Kevin de León each announced over the last week. The field could expand further, as real estate developer Rick Caruso and former L.A. Unified schools Superintendent Austin Beutner are also thinking about getting in.

All the candidates will face off in next June’s nonpartisan primary, and a general election would take place in November in the very likely event that no one took a majority of the vote in the first round. An early August survey from FM3, which was conducted on behalf of an unidentified client, showed Bass leading a hypothetical field with 22% while no other names topped 6%, but the rest of the field has time to get their names out. Indeed, Politico’s Christopher Cadelago reports that Buscaino has already reserved $2 million in TV time; Cadelago also says the councilman has raised $1 million for his proposed June local ballot initiative to ban homeless encampments in public areas.

Bass’ departure from the House would also set off an uncertain race to succeed her in Congress. The 37th District, which includes the neighborhoods of South Los Angeles, Crenshaw, and West Los Angeles, backed Biden 84-14. California is losing a House seat, though, and no one knows what the new map will look like once the independent redistricting commission is done with its work.

GEORGIA U.S. SENATOR — While Mitch McConnell was reportedly extremely skeptical of former NFL player Herschel ​​Walker’s viability in a general election as recently as last month, the Senate minority leader now tells Politico, “I think there’s every indication he’s going to be a good candidate.” McConnell’s Senate Leadership Fund has a history of spending vast amounts of money in GOP primaries in order to block unacceptable candidates, but that’s almost certainly not going to happen here unless he sours on Walker again.

IOWA U.S. SENATOR — Republican incumbent Chuck Grassley, who is already the longest-serving senator in Iowa history, announced Friday that he would seek an eighth term next year. Grassley has always taken at least 60% of the vote in his previous six re-election campaigns (the smallest of those wins was his most recent campaign in 2016, when he prevailed 60-36), and he’ll once again start as the clear favorite in a state that swung hard to the right during the Trump era.

Grassley currently faces intra-party opposition from Jim Carlin, a far-right state senator who said in February that he’d run no matter what the incumbent did, but the challenger has struggled to raise money or attract attention. The Democratic frontrunner, meanwhile, is former Rep. Abby Finkenauer, who won a competitive House race in 2018 and narrowly lost two years later.

A recent Selzer & Company poll found Grassley ahead by a wide 55-37 margin in a general election, though Finkenauer’s presence at least gives her party a serious candidate in case this race turns out to be unexpectedly competitive. Finkenauer used her July campaign kickoff to argue that Grassley has “lost touch” with both Iowa and democracy following the Jan. 6 attack, though the 32-year-old challenger refrained from focusing on the vast generation distance between her and the 88-year-old incumbent.

OHIO U.S. SENATOR — Venture capitalist J.D. Vance on Wednesday responded to a Spectrum News question asking whether women should be required to give birth even if they became pregnant because of rape or incest by saying, “It’s not whether a woman should be forced to bring a child to term; it’s whether a child should be allowed to live, even though the circumstances of that child’s birth are somehow inconvenient or a problem to the society.”

While those comments brought immediate comparisons to fellow Republican Todd Akin’s infamous “legitimate rape” quote from the 2012 Missouri Senate race, Vance has yet to attract any serious intra-party outrage. Vance faces several opponents in next year’s GOP primary, and almost all of them are also running as anti-abortion zealots.

KANSAS GOVERNOR — Democratic Gov. Laura Kelly’s allies at EMILY’s List have released a Clarity Campaign Labs poll that gives her a 47-44 edge over Attorney General Derek Schmidt, who has the Republican primary to himself. This is the first survey we’ve seen of this very likely general election matchup.

NEW YORK GOVERNOR — The Washington Post recently asked Democratic Rep. Tom Suozzi about reports that he’s considering a primary campaign against New York’s new governor, Kathy Hochul, and he did not rule anything out. Suozzi, who represents part of Long Island, instead merely responded, “Right now, the most important thing I can do for New Yorkers is to get SALT relief for them and their families. Everything else right now is secondary.”

Suozzi sought the governorship in 2006 when he was Nassau County executive, but that campaign went horribly for him. Suozzi had the vociferous backing of Home Depot founder Ken Langone, who sought payback against then-state Attorney General Eliot Spitzer for his crusade to uproot Wall Street corruption: It amounted to little, as Spitzer crushed Suozzi 82-18. Suozzi went on to lose re-election in 2009 and failed to regain the county executive four years later, but he bounced back in 2016 by winning New York’s 3rd Congressional District.