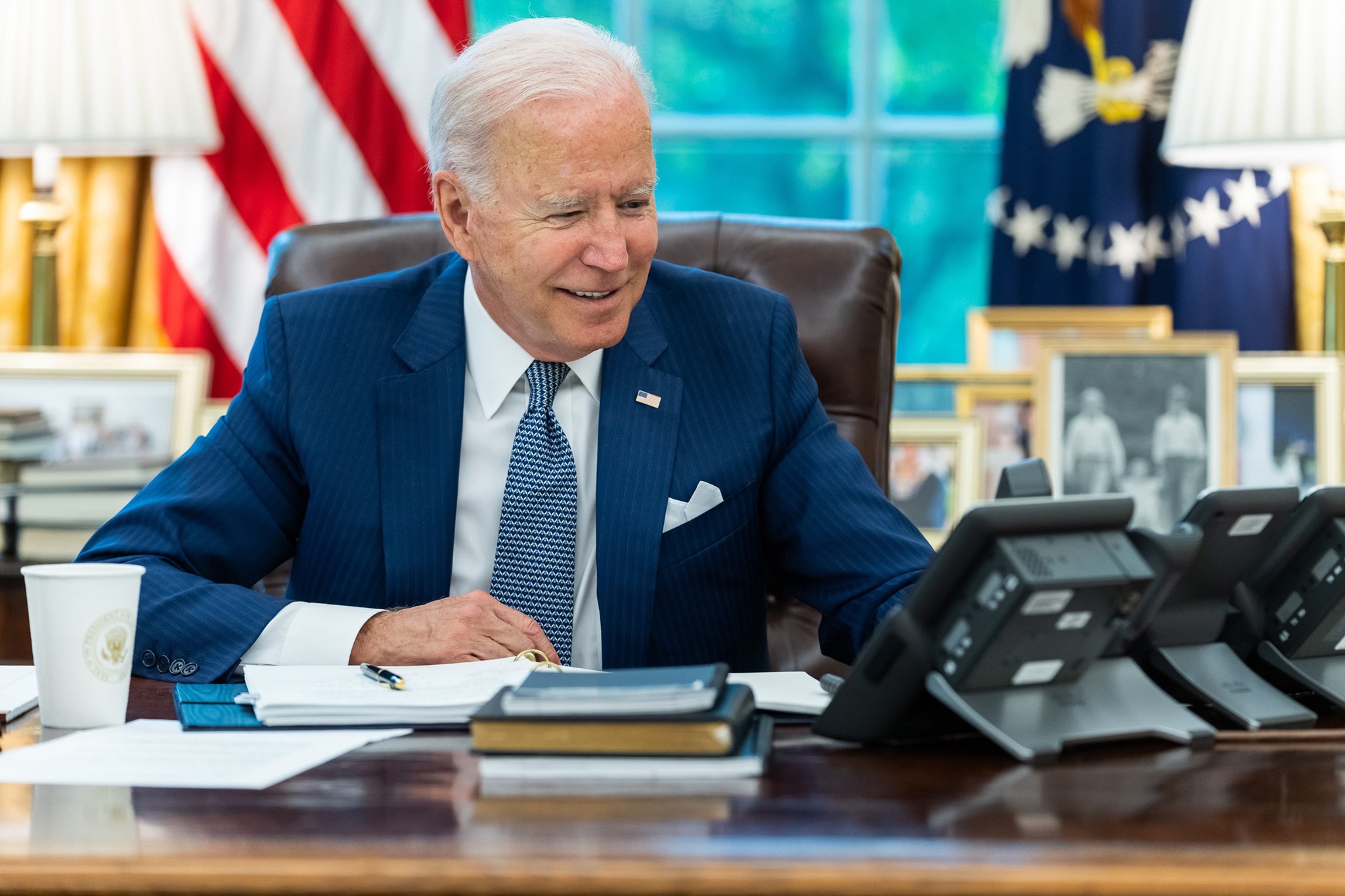 “The Senate’s bipartisan $1.2 trillion infrastructure bill and President Biden’s $3.5 trillion spending package could live or die this week — and take Democrats’ fortunes with them. But all the minute-by-minute political drama obscures how much America could change if even a fraction of it passes,” Axios reports.

“Anything short of total failure could have a transformative impact on day-to-day life — from how we move around to our access to the internet, paid family leave and child care, health care and college.”

“Speaker Nancy Pelosi told House Democrats Monday night that she is no longer linking reconciliation and infrastructure, and said she would seek to pass the public works bill this week regardless of the status of the larger domestic spending bill,” Punchbowl News reports.

“Pelosi’s move is a direct challenge to progressives, who have warned that they will block the $1 trillion bipartisan infrastructure bill if reconciliation isn’t complete.”

“This is a clear sign that Pelosi and her leadership team plan to muscle the infrastructure bill through the House Thursday regardless of where negotiations with the Senate on the $3.5 trillion reconciliation package stand.”

President Biden on Monday acknowledged Congress may not get his economic agenda and a government funding deal done by the end of the week, but expressed optimism both would eventually pass, The Hill reports.

Reps. Pramila Jayapal (D-WA), Ilhan Omar (D-MN) and Katie Porter (D-CA) reiterate in a CNN op-ed that they will not vote for the bipartisan infrastructure bill until after the budget reconciliation companion bill is passed.

Punchbowl News: “This op-ed has three signatories. Speaker Nancy Pelosi has a three-seat margin in the House. Of course, some Republicans will vote for infrastructure, so it still could pass if these Democrats vote no. But we’ll have to see how many Democrats stand with these progressive leaders.”

Wall Street Journal: “Despite sometimes taking contrary positions in negotiations, Ms. Sinema has voted with Mr. Biden 100% of the time, according to the nonpartisan tracking website FiveThirtyEight.”

Punchbowl News reports “The House and Senate are moving toward votes on legislation dealing with government funding, the debt limit, infrastructure, social programs and taxes worth trillions of dollars, although the details of some of these bills aren’t close to finalized yet. This would be a big agenda for an entire month. The House will try to tackle it in one week, while the Senate attempts to avoid a government shutdown. Democratic leaders in both chambers also still have to figure out how to avoid a catastrophic debt default in October.”

“It’s a huge moment for President Joe Biden, Speaker Nancy Pelosi and Senate Majority Leader Chuck Schumer, the biggest so far in the 117th Congress. It’s fair to say what happens in the next couple weeks will go a long way toward deciding whether Democrats have any shot of keeping the House or Senate next year. Failure on any of these issues would be a political disaster for the Democratic triumvirate and the party.”

“President Biden, who received his initial doses of the vaccine on camera, is set to receive a booster shot Monday afternoon at 1 p.m. Eastern time,” the Washington Post reports. “Biden also plans to deliver remarks about battling the coronavirus pandemic.”

“Senate Republicans on Monday blocked a spending bill needed to avert a government shutdown this week and a federal debt default next month, moving the nation closer to the brink of fiscal crisis as they refused to allow Democrats to lift the limit on federal borrowing,” the New York Times reports.

“With a Thursday deadline looming to fund the government — and the country moving closer to a catastrophic debt-limit breach — the stalemate in the Senate reflected a bid by Republicans to undercut President Biden and top Democrats at a critical moment, as they labor to keep the government running and enact an ambitious domestic agenda.”

Washington Post: “The GOP’s opposition dealt a death blow to the measure, which had passed the House last week, and now adds to the pressure on Democrats to devise their own path forward ahead of a series of urgent fiscal deadlines. A failure to address the issues could cause severe financial calamity, the White House has warned, potentially plunging the United States into another recession.”

James Fallows: “It’s not a ‘debate.’ It’s a threat. And Yellen—the Treasury Secretary—is not ‘playing politics.’ She is trying to avert an entirely needless crisis. This is not a policy disagreement. It’s the cynical exercise of the power to do harm—and an offsetting effort to minimize that harm.”

New York Times: “The problem is further compounded by the fact that no one is quite sure when the government will run out of money. The Covid-19 pandemic continues to ravage the United States in waves, frequently disrupting economic activity and the taxes the government collects, complicating Treasury’s ability to gauge its cash flow. Estimates for what’s known as the ‘X-date’ range from as early as Oct. 15 to mid-November.”

Even though Democrats control Congress and the White House, a new Politico/Morning Consult poll finds voters will spread the blame around if the U.S. were to default on the national debt or if there were a government shutdown.

A plurality says they will blame both parties equally, and that’s before this week’s heightened attention to these issues when Republicans plan on filibustering a bill to keep the government open and raise the debt limit.

New York Times: “The dance is repeating this fall, but this time the dynamics are different — and the threat of default is greater than ever.”

“Republicans in Congress have refused to help raise the nation’s debt limit, even though the need to borrow stems from the bipartisan practice of running large budget deficits. Republicans agree the U.S. must pay its bills, but on Monday they are expected to block a measure in the Senate that would enable the government to do so. Democrats, insistent that Republicans help pay for past decisions to boost spending and cut taxes, have so far refused to use a special process to raise the limit on their own.”

“Observers inside and outside Washington are worried neither side will budge in time, roiling financial markets and capsizing the economy’s nascent recovery from the pandemic downturn.”

“After 16 years in power under Ms. Merkel’s leadership, they saw their share of the vote collapse by nearly nine points, garnering only 24.1 percent of the vote. It was the party’s worst showing in its history, and the election signaled the end of an era for Germany and for Europe.”

“The Social Democratic Party defeated Ms. Merkel’s Christian Democratic Union by 1.6 percentage points, according to preliminary official results reported early Monday. Their candidate, Olaf Scholz, insisted the party’s gain of five points from 2017 — giving them 25.7 percent of the vote — provided them a mandate to form the next government.”

“While the federal sex crimes investigation into Rep. Matt Gaetz (R-FL) has not fueled the kinds of explosive headlines it generated when the news first broke in late March, the case shows no signs of a slowdown,” the Daily Beast reports.

“In fact, legal experts told The Daily Beast, the perceived lull is nothing outside the norm and can be chalked up to a number of factors—including a wide range of charges that investigators could be exploring. Although Gaetz and his allies like to interpret the lack of charges as an indication of innocence, the delays could just as easily suggest that the charges that could be coming down the pike are extremely grave and complex.”

“And if you were looking for an indication of just how seriously Gaetz himself is taking the prospect of charges, look no further than the high-powered team of attorneys the beleaguered Florida man has brought on for his defense.”

“Iceland briefly celebrated electing a female-majority parliament Sunday, before a recount produced a result just short of that landmark for gender parity in the North Atlantic island nation,” the AP reports.

“The initial vote count had female candidates winning 33 seats in Iceland’s 63-seat parliament, the Althing, in an election that saw centrist parties make the biggest gains.”

Rudy Giulaini has been banned from Fox News, Politico reports.  The ban has reportedly been in place since the start of the summer, but Giuliani didn’t realize it until he was cut from a show on the 20th anniversary of the 9/11 attacks.

South China Morning Post: “The trade war between the United States and China failed to prompt American businesses to leave the Chinese market, with costs from tariffs instead passed along to consumers, new research found.”

“In a paper published this month, researchers Samantha Vortherms and Jiakun Jack Zhang argued that US tariffs on billions of dollars’ worth of Chinese products – launched in mid-2018 to bring US companies home – hurt the US economy and did not successfully pressure China to change its economic policies.”

“New York City schools have been temporarily blocked from enforcing a vaccine mandate for its teachers and other workers by a federal appeals judge just days before it was to take effect,” the AP reports.

“The Taliban hanged a dead body from a crane parked in a city square in Afghanistan on Saturday in a gruesome display that signaled the hard-line movement’s return to some of its brutal tactics of the past,” the AP reports.

Yahoo News: “In 2017, as Julian Assange began his fifth year holed up in Ecuador’s embassy in London, the CIA plotted to kidnap the WikiLeaks founder, spurring heated debate among Trump administration officials over the legality and practicality of such an operation.”

“Some senior officials inside the CIA and the Trump administration even discussed killing Assange, going so far as to request ‘sketches’ or ‘options’ for how to assassinate him.”

Aaron Blake: “The story of the Republican Party in the Trump era is, by and large, one of a boiled frog.”

“Trump constantly pushed the envelope in ways that made his allies uncomfortable. They sometimes spoke out, especially early on, only to have the base stand by the president and rebuke them. That meant that when Trump pushed even further, his duly chastened allies increasingly responded accordingly: with silence. It’s how we got from a guy carping about supposed voter fraud in an election he won, in 2016, to a guy spurring a harebrained effort to overturn the 2020 election, which he lost.”

“The boiled frog (the proverbial tale of a frog that is boiled too slowly to realize what’s happening to it) is now returning, in the form of replacement theory. The GOP seems either unconscious of what’s happening — or doesn’t care.”

New York Times: “On Tuesday, General Mark Milley will appear in what could be the most significant televised congressional hearing involving senior military leaders since Gen. David Petraeus was grilled by lawmakers on the fiasco that was the war in Iraq in 2007.”

“Halfway through his four-year term as the nation’s top military officer, General Milley, along with Defense Secretary Lloyd J. Austin III, is certain to face sharp questions about another contentious topic: Afghanistan, including their advice to President Biden not to withdraw all U.S. troops from the country.”

Rep. Liz Cheney (R-WY) told 60 Minutes that Americans “deserve better than having to choose between” President Biden’s “disastrous” policies and former President Trump “who violated his oath of office.”

Cheney also said she was “wrong” to oppose same-sex marriage — a stance that caused a rift with her sister, Mary Cheney.

“I love my sister very much and am so proud of her. It took a ton of courage to admit that she was wrong back in 2013 when she opposed marriage equality. That is something few politicians would ever do. I have nothing but respect and admiration for the strength of character she continues to show on a daily basis.”