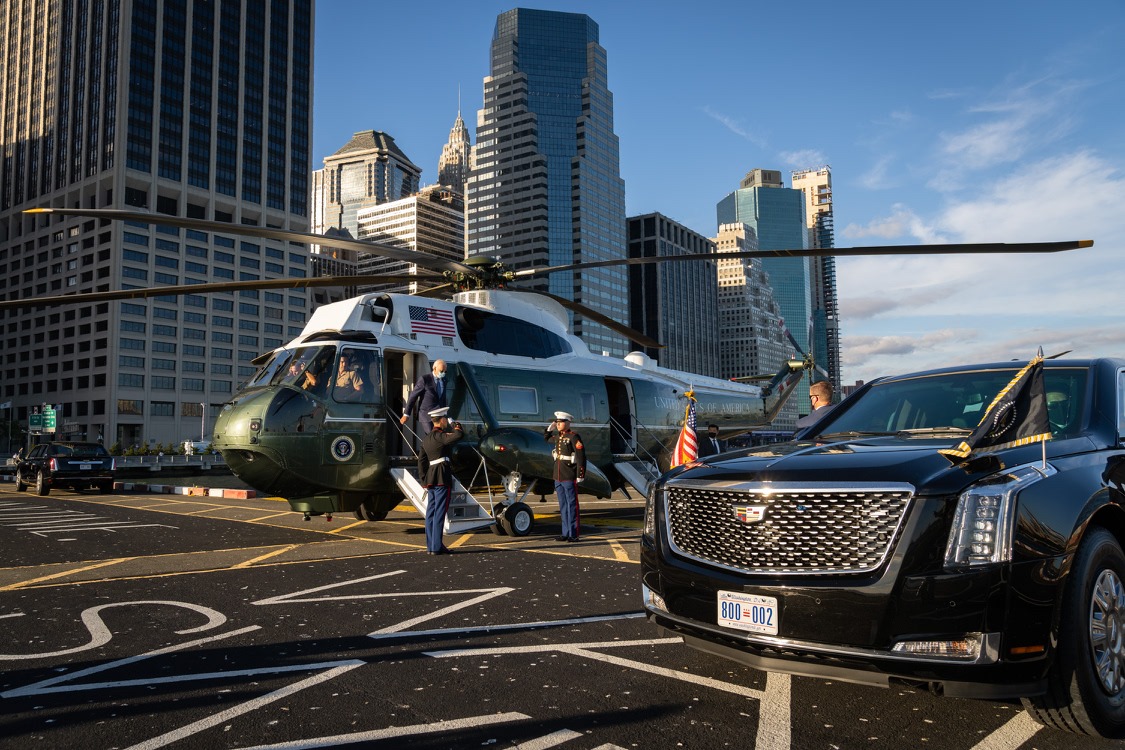 “After all the scurrying, searching, sifting, speculating, hand-counting and bamboo-hunting had ended, Republicans’ post-mortem review of election results in Arizona’s largest county wound up only adding to President Biden’s margin of victory there,” the New York Times reports.   “But for those who have tried to undermine confidence in American elections and restrict voting, the actual findings of the Maricopa County review that were released on Friday did not appear to matter in the slightest. Former President Donald J. Trump and his loyalists redoubled their efforts to mount a full-scale relitigation of the 2020 election.”

“Any fleeting thought that the failure of the Arizona exercise to unearth some new trove of Trump votes or a smoking gun of election fraud might derail the so-called Stop the Steal movement dissipated abruptly.”

Former President Donald Trump laid into the news media after a draft report of the 2020 election audit in Arizona reaffirmed President Biden’s victory in the state’s largest county, The Hill reports.

Said Trump: “Huge findings in Arizona! However, the Fake News Media is already trying to ‘call it’ again for Biden before actually looking at the facts – just like they did in November!”

He added: “This is a major criminal event and should be investigated by the Attorney General immediately. The Senate’s final report will be released today at 4:00PM ET. I have heard it is far different than that being reported by the Fake News Media.”

Jonathan Bernstein: “As with most things Trump, it’s hard to tell whether there’s method to any of this. Perhaps Trump really believes the conspiracy theories he spouts and thinks this is the way to prove them. Perhaps he, or other anti-democracy Republicans, are deliberately attempting to undermine trust in election results by encouraging the belief that all election administration is as partisan as these efforts are. Perhaps it’s a function of private companies seeking to cash in. Perhaps it’s what plays well, for whatever reason, in Republican-aligned media — a fad they’ll ride until they find something else.”

“Perhaps it’s some combination of all of this.”

“A GOP-commissioned report that did not find evidence fraud tainted Arizona’s 2020 election has intensified the fight over similar partisan ballot reviews in Pennsylvania, Texas and Wisconsin, with former president Donald Trump pressing for such examinations and Democrats stepping up their efforts to block them,” the Washington Post reports.

“The outcome of the GOP-backed recount in Maricopa County, Ariz., which concluded that President Biden won the state’s largest county by even more votes than the certified results, raises the stakes for the Republican leaders who have gone along with Trump’s demands for ‘forensic audits’ in other states.”

Pennsylvania now stands to become ground zero in the movement to “audit” the election after former President Donald Trump’s efforts to discredit the 2020 election results failed in Arizona, the Philadelphia Inquirer reports.

On the Media: “The story of Arizona’s almost year-long quest to undermine its own election results is less like a coda, and more an overture of what’s coming for America’s election system.”

Mark Kelly: “Joe Biden and the Democratic Party won in 2020 by campaigning on two main issues: Donald Trump’s personality and his administration’s handling of Covid-19.”

“Today, Democrats are doubling down on that strategy. They realize that the specter of the former president will be more effective than any policy at turning out Democratic voters in next year’s midterm elections.”

Rep. Karen Bass (D-CA) “is planning to announce that she will run for mayor of Los Angeles in 2022, joining a high-stakes race to run the second-most populous city in the country,” the Washington Post reports.

“Biden has nominated the current mayor of Los Angeles, Eric Garcetti, to serve as ambassador to India. Should Garcetti win confirmation for the job in the Senate, the Los Angeles City Council will have the power to appoint his replacement.”

A new University of Chicago survey finds 47 million Americans believe “the 2020 election was stolen from Donald Trump and Joe Biden is an illegitimate president.”

Of those, 21 million say Trump should be restored to office by force.

“The rhetoric is so overheated that I think it provides the basis for millions of people to accept an actual stolen election as payback for the falsely claimed earlier ‘stolen’ election. People are going to be more willing to cheat if they think they’ve been cheated out of their just desserts.” — Election law expert Rick Hasen, in an interview with Politico.

Rep. Liz Cheney (R-WY) tweeted a photo of George W. Bush with a message: “I like Republican presidents who win re-election.”

Washington Post: “When Harris became an administration point person on abortion this month, many operatives in both parties viewed it as yet another example of President Biden’s saddling her with a thankless task on an explosive subject he was eager to avoid handling. Biden had already assigned Harris to tackle the root causes of irregular migration, amid a chaotic influx at the southern border, and to take the lead on voting rights, as Republican-led states began passing restrictive voting laws.”

“All are volatile social issues that many politicians would see as offering little benefit as policy assignments. But behind the scenes, Harris has been quietly seizing the opportunity to build a liberal national network of dedicated activists that is convinced she embraces its causes.”

“If Harris has a path to the presidency, it is likely to run through an energized liberal base — not, as it did for Biden, through blocs of centrist Democrats and moderate Republicans.”

Graham (R-SC) told former President Donald Trump, “You fucked up your presidency” earlier this year when advising him to accept that he lost the 2020 presidential election, The Hill reports.  The anecdote was shared by Washington Post reporter Bob Woodward while he was discussing his new book Peril.

Former President Trump suggested in an interview Friday night that only a “bad call from a doctor” would prevent him from seeking another White House bid, The Hill reports.   Said Trump: “Things happen, through God, they happen. But I feel so good.”

Former President Trump quipped that 2018 Georgia gubernatorial candidate Stacey Abrams (D) may have done a better job in office than her opponent, Gov. Brian Kemp (R), who has continued to catch the former president’s ire for refusing to overturn 2020 election results, The Hill reports.   Said Trump: “Having her I think might be better than having your existing governor, if you want to know the truth. Might very well be better.”

“Madison Cawthorn can invoke coming bloodshed, and Paul Gosar can flirt with white nationalism, and they’re signing a letter asking to have me kicked out of the caucus. This is how far the Republican Party has fallen. They call me a RINO but I haven’t changed. The Republican Party has changed into an authoritarian Trump organization. They’re the RINOs. Trump is a RINO.”  — Rep. Adam Kinzinger (R-IL), quoted by The Atlantic.

Associated Press: “Sanders’ celebrity as former President Donald Trump’s spokesperson granted her immediate front-runner status in one of the nation’s most Trump-friendly states. It’s also transforming politics in a place where voters in state races are used to hearing overwhelmingly about Arkansas taxes, Arkansas roads and Arkansas schools.”

“This is hardly the only state where local politics isn’t local anymore. Republican candidates for governor elsewhere also are focused more on President Joe Biden than their own opponents and on federal, rather than state, issues. And many Democrats would rather talk about Trump than about their rivals.”

Said Sanders: “As I travel around the state, I keep hearing this criticism, ‘Oh, there’s that Sarah Sanders, nationalizing the race.’ And my answer to those people is, ‘You bet I am.’ Because if you’re not paying attention to what is happening in this country, you’re missing what is going on.”