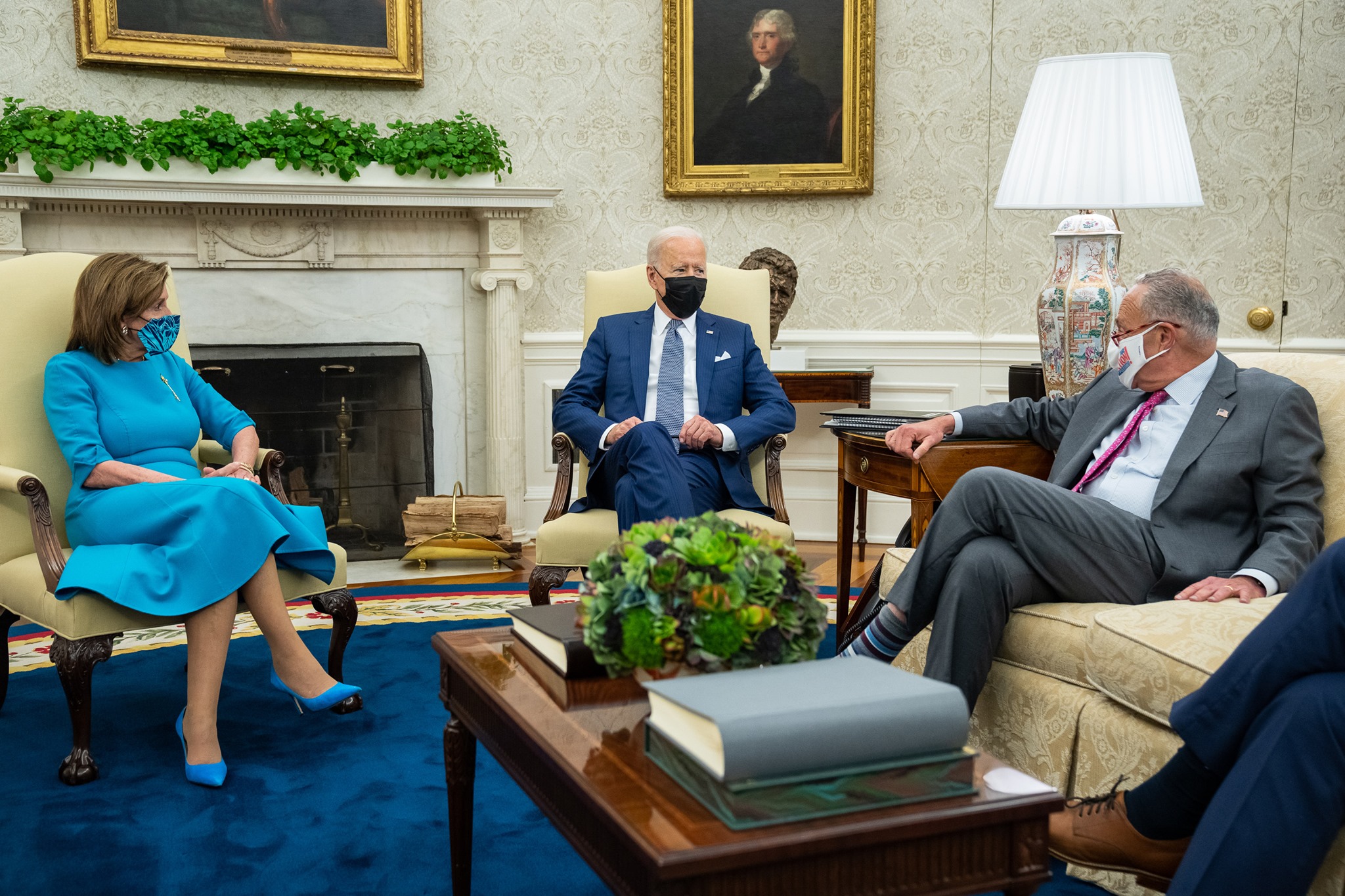 Speaker Nancy Pelosi announced the House vote on the bipartisan infrastructure bill — originally scheduled for Monday — will now be on Thursday.

Pelosi told ABC News that it “seems self-evident” that the final price tag for the Democrats’ budget reconciliation plan would be smaller than $3.5 trillion originally proposed. Said Pelosi: “I think even those who want a smaller number support the vision of the president… We have to find our common ground, respectful of each other’s views. This isn’t about moderates versus progressives.”

“By explicitly announcing their support for a big package targeting climate change and expanding the social safety net, Reps. Vicente Gonzalez (D-TX) and Filemon Vela (D-TX) are trying to convince progressives to vote for the infrastructure bill this week.”

“Put on your heat shields and buckle up, because this is going to be intense.”  — Sen. Chris Van Hollen (D-MD), quoted by the New York Times, on Democrats trying to pass their legislative agenda this week.

“The Senate will hold a futile vote Monday night — just 72 hours before a potential shutdown — on a House-passed bill to fund the government through Dec. 3 and raise the debt limit,” Axios reports.

“The bill is going to fail. Period. But then comes Plan B: A ‘clean’ continuing resolution — stripped of language about raising the debt limit — that Democrats spent the past week preparing.”

And a reminder: This is not normal.

“A crisis-management playbook Federal Reserve officials created years ago could guide their response this fall if the federal government can’t pay all its bills because of a political standoff over raising the federal debt limit,” the Wall Street Journal reports.

“The options include the Fed buying Treasury securities in default on the open market and selling Treasurys owned by the Fed to counteract potentially severe strains in financial markets.”

New York Times: “Nobody said it would be easy, but the multiple tasks piling up for Mr. Schumer and Ms. Pelosi present a particularly daunting set of challenges: A $1 trillion infrastructure bill awaits consideration in the House on Monday, a $3.5 trillion social policy and climate change measure is still being stitched together, and a possible government shutdown looms on Friday followed by a potential debt crisis next month.”

“Without a single vote to spare in the Senate and as few as three in the House, the coming weeks could pose the most difficult test that any pair of congressional leaders has faced in memory, recent or otherwise. The Affordable Care Act was a feat, involving remarkable twists and multiple near-deaths, but even with 39 Democratic defections, it still passed the House by five votes.”

“Homeland Security Secretary Alejandro Mayorkas announced Friday that all migrants have been cleared from the encampment in Del Rio, Texas,” the Washington Post reports.

“Mayorkas made the announcement at the White House amid widespread criticism of the Biden administration for its handling of the migrants, most of them Haitians, at the U.S.-Mexico border.”

Said Biden: “It’s horrible what you saw. To see people like they did, with horses, running them over, people being strapped. It’s outrageous. I promise you those people will pay.”

New York Times: “Liberals believe voters will punish them in 2022 if they do not fulfill Mr. Biden’s sweeping campaign agenda, in part because it would demoralize their core voters and ensure that some of them would stay home.”

“Some moderates, however, think that the historically difficult first midterm for the president’s party would be made worse if they handed Republicans fodder to portray them as tax-and-spend liberals at a moment when inflation has jumped.”

Politico: “A motley gang of deal-making House Republicans took partial credit for pushing through President Joe Biden’s infrastructure plan this summer. That doesn’t mean they’ll all vote for it.”

Pfizer CEO Albert Bourla told ABC News that he anticipates a return to normal life post-pandemic within the year.  He added: “I think the most likely scenario is annual revaccination, but we don’t know really. We need to wait and see the data.”

Reuters: “Germany’s Social Democrats narrowly won Sunday’s national election, projected results showed, and claimed a “clear mandate” to lead a government for the first time since 2005 and to end 16 years of conservative-led rule under Angela Merkel.

The centre-left Social Democrats (SPD) were on track for 26.0% of the vote, ahead of 24.5% for Merkel’s CDU/CSU conservative bloc, projections for broadcaster ZDF showed, but both groups believed they could lead the next government.

With neither major bloc commanding a majority, and both reluctant to repeat their awkward “grand coalition” of the past four years, the most likely outcome is a three-way alliance led by either the Social Democrats or Merkel’s conservatives.

Agreeing a new coalition could take months, and will likely involve the smaller Greens and liberal Free Democrats (FDP).”

“This epic week for President Biden on Capitol Hill is even bigger than his domestic agenda,” Axios reports.

“Biden has anchored his entire strategy for foreign affairs on the notion that ‘America is back.’ What that means in practice is that Biden needs to prove democracy works to rally America’s liberal allies against rising authoritarians.”

“A collapse of any or all of his four urgent legislative priorities — infrastructure, reconciliation, government funding and the debt ceiling — would deal a severe blow to the underlying theory of Biden’s presidency.”

Washington Post: “As Democrats in Washington struggle through contentious negotiations over a sweeping domestic policy proposal, many party activists and officials across the country are watching with a collective headshake and mounting anxiety.”

“They see Democrats in control of the White House and Congress, yet so far unable to resolve their differences over a multitrillion dollar infrastructure and social safety net package. They see in President Biden a candidate who ran on unity but is now plagued by intraparty divisions. In House and Senate Democratic leaders, they see competing priorities and a reluctance to get their members in line.”

“The Supreme Court’s approval rating is plummeting, its critics are more caustic and justices are feeling compelled to plead the case to the public that they are judicial philosophers, not politicians in robes,” the Washington Post reports.

“All of this as the court embarks Oct. 4 on one of the most potentially divisive terms in years. Cases already docketed concern gun control, the separation of church and state, and the biggest showdown in decades on the future of Roe v. Wade and the constitutional right to abortion.”

Senate Minority Leader Mitch McConnell (R-KY) told Politico he would not rule out blocking a Supreme Court nomination by President Biden if Republicans take control of the Senate in 2023.

Said McConnell: “Cross those bridges when I get there, we are focusing on ‘22. I don’t rule anything in or out about how to handle nominations if I’m in the majority position.”

Wall Street Journal: “The American supply chain has so far failed to adapt to the crush of imports as businesses rush to restock pandemic-depleted inventories. Tens of thousands of containers are stuck at the ports of Los Angeles and Long Beach, Calif., the two West Coast gateways that move more than a quarter of all American imports. More than 60 ships are lined up to dock, with waiting times stretching to three weeks.”

“Participants in each link in the U.S. chain—shipping lines, port workers, truckers, warehouse operators, railways and retailers—blame others for the imbalances and disagree on whether 24/7 operations will help them catch up. All of them are struggling with a shortage of workers.”

Jeff Greenfield: “It is, however, possible to trace the roots of the current Democratic disarray. It comes down to a fundamental misunderstanding of a central political truth, offered by former British Prime Minister Margaret Thatcher. In turning her Conservative Party in a sharp rightward direction, she argued: ‘first you win the argument, then you win the vote.’

“In shaping their sweeping social spending legislation, with a putative price tag of $3.5 trillion, President Joe Biden and the Democratic congressional leaders have argued that this is what the voters chose last November. And polls do show broad support for universal pre-K, lower prescription drug prices and expanded health care, paid for by higher taxes on wealthy individuals and corporations.”

“In essence, the argument goes, ‘We won the argument and the vote and now it’s time to turn these ideas into law.’ The problem is that the Democrats did not win the vote — at least, not in the sense that mattered, given the unique nature of our system of government. And Biden has not even won the argument widely enough in his own party.”

“The House on Friday passed legislation that would create a statutory right for health-care professionals to provide abortions, amid an intensifying legal battle over a Texas law that is the most restrictive in the nation,” the Washington Post reports.

Rep. Marjorie Taylor Greene (R-GA) instigated a shouting match with a group of House Democrats who were holding an event outside the U.S. Capitol.

New York Times: “The building houses one of Oklahoma’s four abortion clinics, and at least two-thirds of its scheduled patients now come from Texas. So many, in fact, that it is trying to hire more staff members and doctors to keep up.”

“The increase is the result of a new law in Texas banning abortions after about six weeks, a very early stage of pregnancy. As soon as the measure took effect this month, Texans started traveling elsewhere, and Oklahoma, close to Dallas, has become a major destination.”