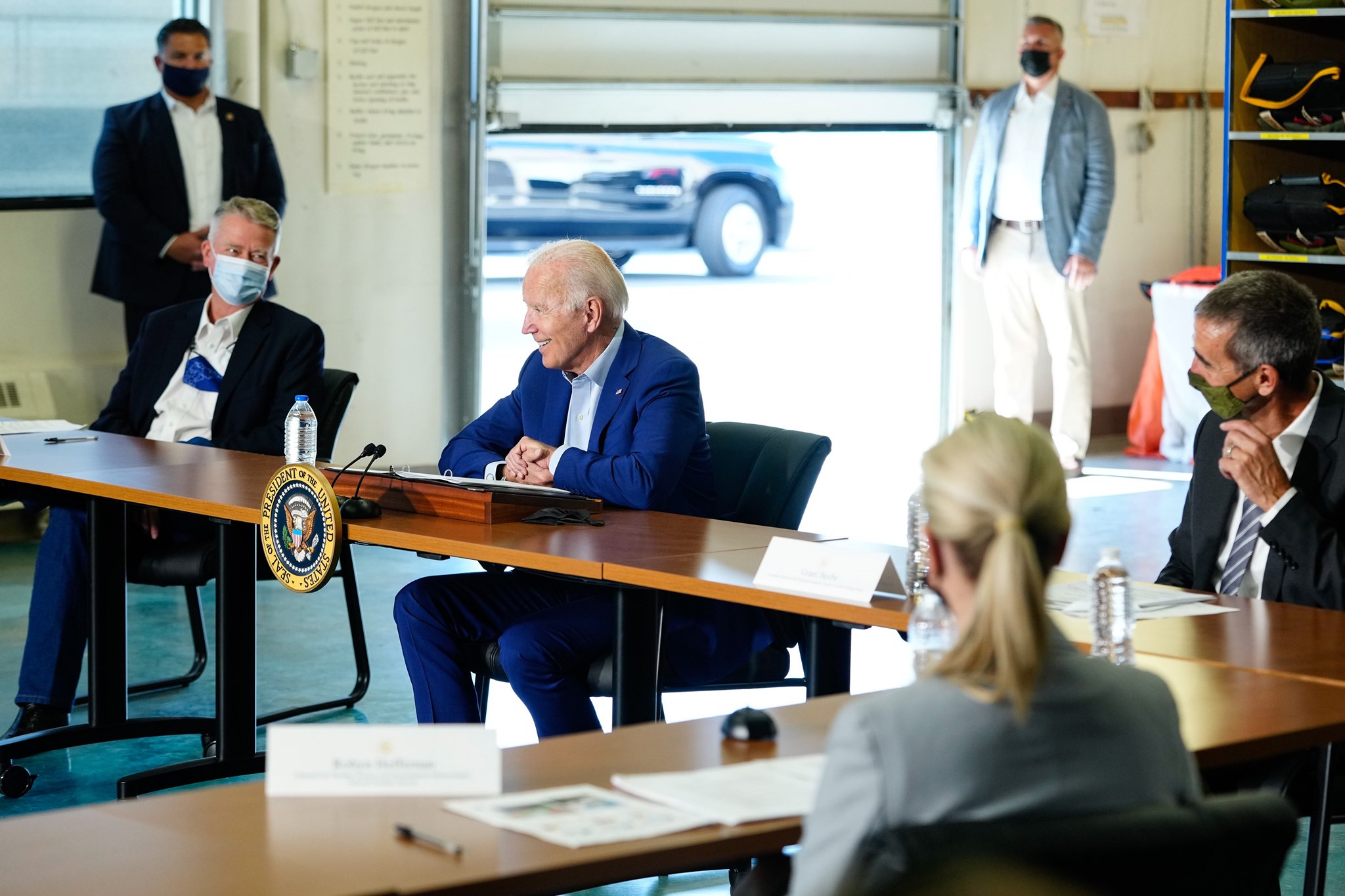 Cook Political Report: “We can no longer say this is a contest where the Democrat has the advantage. While many of the fundamentals favor McAuliffe — and we expect he still has a slight edge — it’s Youngkin who seems to have the enthusiasm on his side. That could change before November 2, much as it did in California in the closing weeks of the race.”

“But Youngkin is far more difficult to make into a boogeyman than replacement frontrunner Larry Elder was, whose gaffes and comments were golden gifts for Gov. Gavin Newsom. He’s far more Bob McDonnell than Ken Cuccinelli, but Democrats hope he’ll be more of an Ed Gillespie ultimately — a more establishment-type Republican who was forced into more conservative positions and tied to Trump as his undoing.”

“This is why while we may put a pinkie on the scale for McAuliffe — and it’s far easier for Democrats in a state like Virginia to get the final few points they need than Republicans — the race is nonetheless close enough in our range to shift its rating. For now, Virginia Governor moves from Lean Democrat to Toss Up.”

With Election Day today in Germany, the election is wide open, the Financial Times reports.

“Never before have Germans faced such a broad spectrum of possible electoral outcomes. Angela Merkel is quitting the political battlefield and the army of voters the chancellor once commanded is now up for grabs. Her departure, after 16 years in power, has disrupted a system that once seemed the model of stability.”

Reuters: “A potential lurch to the left in Germany’s election on Sunday is scaring millionaires into moving assets into Switzerland.”

A new poll conducted for the Future of Tech Commission found that 80% of registered voters—83% of Democrats and 78% of Republicans—agreed the federal government “needs to do everything it can to curb the influence of big tech companies that have grown too powerful and now use our data to reach too far into our lives.”

MINNESOTA 2ND CD — Former Republican Rep. John Kline, who represented Minnesota’s 2nd Congressional District from 2003 to 2017, has endorsed Marine veteran Tyler Kistner’s second campaign against Democratic Rep. Angie Craig. Kistner so far is the only Republican in the race, though state Sen. Eric Pratt recently said he was considering a bid and would decide next month.

ALABAMA U.S. SENATOR — The Republican firm Public Opinion Strategies has released a GOP primary survey that gives Rep. Mo Brooks a wide 41-11 lead over Katie Boyd Britt, the former head of the Business Council of Alabama; 2020 House candidate Jessica Taylor lags behind with 7%, while former Ambassador to Slovenia Lynda Blanchard takes 3%. The Washington Examiner writes that the survey was “conducted mainly to research attitudes toward energy policy among the state’s voters.”

NORTH CAROLINA 13TH CD — Law student Bo Hines has unveiled an endorsement from Rep. Madison Cawthorn, who is one of the far-right’s favorite members of Congress, for next year’s open seat Republican primary.

NEW HAMPSHIRE 1ST CD — 2020 Republican nominee Matt Mowers’ second campaign has earned the backing of former Gov. Craig Benson, whose defeat in 2004 makes him the only Granite State governor to fail to secure a second two-year term since 1926.

NEW YORK 19TH CD — Dutchess County Executive Marc Molinaro said Tuesday that he would challenge Democratic Rep. Antonio Delgado, an announcement that gives national Republicans the candidate they’ve spent years trying to recruit. The current version of this Hudson Valley seat backed Joe Biden 50-48 four years after it supported Donald Trump 51-44, but no one knows what the new map will look like: New York’s bipartisan redistricting commission recently released draft plans for Congress, but Democrats can potentially pass their own boundaries thanks to their supermajorities in the legislature.

Molinaro was the 2018 Republican nominee against Democratic Gov. Andrew Cuomo, a race he lost by a brutal 60-36 margin statewide. Molinaro, though, did carry the 19th District by a wide 53-42 even as Delgado was unseating Republican Rep. John Faso, which made the county executive an attractive prospect for the NRCC.

The committee hoped that Molinaro would launch a House campaign after he was re-elected in November of 2019 as leader of Dutchess County, but it didn’t have a viable backup candidate when he announced two months later that he would stay put. The nominee the GOP ended up with, Kyle Van De Water, raised very little money and attracted no serious outside support, and Delgado ultimately won by a solid 54-43. Van De Water ended his second campaign here last month and died a short time afterwards.

Delgado, for his part, will have plenty of resources to defend himself next year. The congressman raised about $700,000 during the second quarter of 2021, and he ended June with $4.46 million on-hand.

BUFFALO MAYOR — Mayor Byron Brown announced Tuesday that he would not appeal last week’s court rulings keeping him off the general election ballot and would instead focus on retaining his office as a write-in candidate. The only person who will be listed on the November ballot is activist India Walton, who defeated Brown in a June Democratic primary upset.

While Brown faces a challenging task this fall, though, the Buffalo News’ Robert McCarthy notes that major labor groups are largely in his corner. The latest union to back the incumbent was the regional AFL-CIO, which supported him in the primary and reaffirmed that it was sticking with him in the general election. Walton’s most prominent labor support has come from the Buffalo Teachers Federation, which endorsed her for the Democratic nomination and will almost certainly vote to back her again in mid-October.

Lall, who previously served in former Mayor Antonio Villaraigosa’s administration, currently heads an organization that Los Angeles Magazine describes as “the powerhouse advocacy and lobbying group that counts more than 300 downtown businesses, trade associations, cultural organizations, and nonprofits as members.” The candidate, whose father is originally from India, would be both the first woman and first person of Asian descent elected to lead America’s second-largest city.

Lall launched her campaign by pledging to focus on homelessness, with the Los Angeles Times writing she “promised to build more housing for those experiencing mental health crises, change zoning rules to allow for the construction of more affordable housing and press other cities in Los Angeles County to do more to address homelessness across the region.” Los Angeles Magazine notes that “nearly everyone running for any city office next year” has also called homelessness the major issue facing Los Angeles.

De León, for his part, is a longtime labor ally whose career in elected office goes back to 2006, when he first won a seat in the state Assembly. De León went on to lead the state Senate, and he held that powerful post when he launched his 2018 campaign to unseat his fellow Democrat, California Sen. Dianne Feinstein.

De León attracted national attention from progressives who had long wanted to replace the moderate Feinstein, who generated unwanted attention the previous year when she urged an audience to show Donald Trump more patience, but he struggled to raise enough money to compete in this massive state. Feinstein, who had the support of prominent state and national Democrats, ended up prevailing in the general election by a 54-46 margin. De León, though, bounced back two years later when he decisively won a spot on the 15-member City Council, and he’s spent his tenure focusing on building more homes to house the homeless.

SEATTLE MAYOR — City Council President Lorena González has released a poll from GQR that shows her tied 45-45 with her predecessor, Bruce Harrell, ahead of the November general election. That’s a very different result than the 42-27 Harrell lead that Elway Poll found in its recent survey for the publication Crosscut.

ATLANTA MAYOR — City Council President Felicia Moore is up with her first TV spot ahead of the November nonpartisan primary for mayor; her campaign told the Atlanta Journal-Constitution the ad was part of a six-figure buy, though they didn’t reveal more. Two of Moore’s rivals, former Mayor Kasim Reed and attorney Sharon Gay, began running commercials a few weeks ago, while City Councilman Andre Dickens went on the air last week.

Moore tells the audience how her “commitment to service” began with her family and later at her historically Black college. She continues by describing how she used her time on the City Council to pass laws helping seniors and institute ethics reforms, concluding, “As our next mayor, I will make sure the city is working for you, not me.”

Bibb, meanwhile, earned endorsements this week from both the city’s SEIU chapters, Local 1 and District 1199. District 1199, which represents healthcare and social service workers, had supported state Sen. Sandra Williams in the nonpartisan primary. Cleveland Scene, though, notes that the union had come into conflict with Kelley many times, especially over his opposition to raising the minimum wage to $15 an hour, so it’s hardly a surprise it’s pulling for Bibb now.

The general election between Bibb and Kelley will be a contest between two candidates with very different backgrounds. Bibb, who is 34, is a first-time candidate who would be Cleveland’s youngest mayor since Michael White was elected in 1989, something White himself highlighted when he endorsed Bibb. Kelley, by contrast, is a political veteran who has the support of retiring Mayor Frank Jackson. Kelley would also be the first white mayor of Cleveland, where nearly a majority of residents are Black, since Jane Campbell left office following her 2005 loss against Jackson.