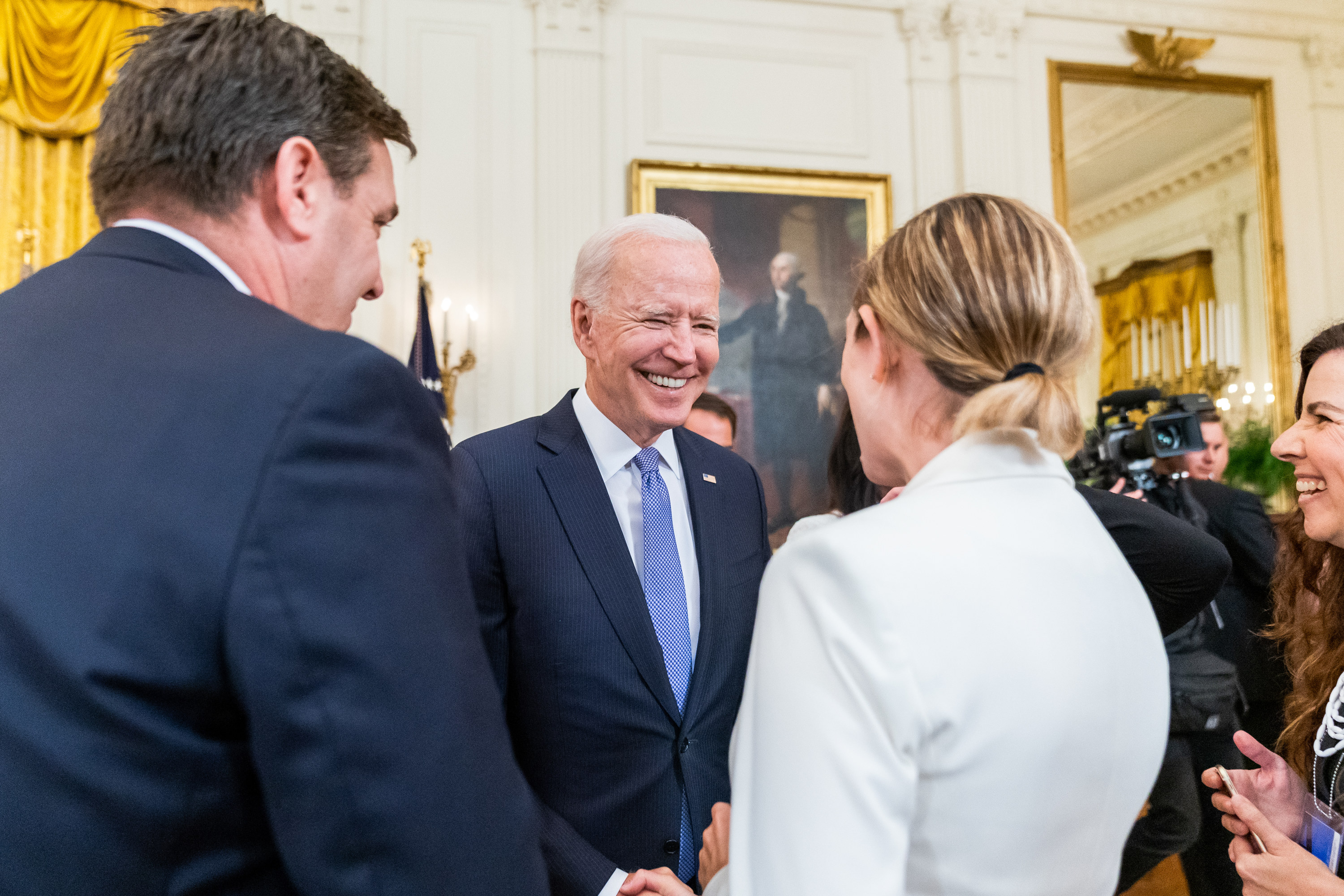 A new poll from the University of Mary Washington is the first independent survey to find Republican Glenn Youngkin leading Democrat Terry McAuliffe, in this case by a 48-43 margin among likely voters. However, among registered votes, McAuliffe is ahead 43-38—an unusually large 10-point swing between the two voter screens, with all of the movement limited entirely to the Republican side. The only other poll to show Youngkin up was his own internal earlier this month that gave him a narrower 48-46 lead.

The poll is likely an outlier, given the other Viriginia polls released this past week:

Meanwhile, the battle on the airwaves continues with new spots from both candidates, both of which feature women who were shooting victims. McAuliffe’s latest ad stars Lisette Johnson, whose husband shot her four times in front of their daughter in 2005. She castigates Youngkin for opposing “laws to stop domestic abusers from buying guns, even when they’ve threatened the lives of their family,” adding, “My kids and I still bear those scars today.”

Youngkin’s minute-long ad, meanwhile, is narrated by former Richmond police officer Cheryl Nici, who was shot in the head by a man wanted for killing three others in 1984. “I spent years trying to heal those emotional and physical wounds,” says Nici. “Every few years I have to rip those wounds open again to plead with the members of Terry McAuliffe’s parole board to keep the man who tried to kill me off the streets.” As the Washington Post notes, though, Nici’s attacker was denied parole in no uncertain terms three times over the last decade.

A new Marquette University Law School poll found nationwide approval of the Supreme Court falling to 49%, down from 60% in July and from 66% a year ago.

A new Politico/Morning Consult poll finds more voters would blame Democrats than Republicans if the U.S. were to default on its debt.  Asked which party they would blame more, 33% said Democrats, 42% said both parties, and only 16% said Republicans.

Former Missouri governor Eric Greitens (R), who is running for Senate, said that if he wins next year, he will not support Senate Minority Leader Mitch McConnell (R-KY) as former president Donald Trump tries to oust the GOP party leader, the Washington Post reports.

Charlie Sykes: “Trump has already made dozens of endorsements in down-ballot races against Republican officials who refused to back his claims of election fraud, not to mention the 10 members of Congress who actually voted to impeach him for inciting the Jan. 6 insurrection.”

“The result is a Trump-led purge of dissidents, but the bigger story — and the one with longer-term implications — may be the self-deportation of the sane, the decent and the principled, who simply opt to leave on their own.”

“Their political emigration is profoundly changing the face of the GOP, and it is happening at every level of politics, from local school boards to the United States Senate. Whatever the result of next year’s elections, the GOP that remains will be meaner, dumber, crazier and more beholden than ever to the defeated, twice-impeached former president.”

“The race for Wyoming’s single U.S. House district has pitted two of the biggest names in Republican politics against one another: both of the party’s living former presidents,” the Wall Street Journal reports.

“Former President George W. Bush’s first campaign event of the 2022 midterms will be a fundraiser to support Rep. Liz Cheney, the Wyoming Republican who is among former President Donald Trump’s top targets to unseat. The fundraiser will be held next month in Dallas.”

OHIO 16TH CD — Ohio Rep. ​​Anthony Gonzalez, who was one of the 10 Republicans who voted to impeach Donald Trump, announced Thursday evening that he would not seek re-election out of disgust for “​the toxic dynamics inside our own party.”

Gonzalez, who also said that his family had received death threats following his January vote, further told the New York Times that he’d devote “[m]ost of my political energy” towards ensuring that Trump never returned to the White House. Trump, for his part, celebrated Gonzalez’s departure by emphasizing his earlier endorsement for former White House aide Max Miller and gloating, “1 down, 9 to go!”

The current version of Ohio’s 16th District, which contains the western suburbs of Cleveland and Akron, supported Trump 56-42 in 2020. The Buckeye State will lose a House seat during the upcoming round of redistricting, but it’s unlikely this constituency will be the one that gets eliminated since the GOP has more or less complete control over the map making process. The Trump-backed Miller will also be hard to stop in a primary despite allegations that he physically attacked his then-girlfriend, White House Press Secretary Stephanie Grisham, last year.

Gonzalez loyally voted with the Trump administration during his first term and opposed impeaching him in 2019, but he changed course after the Jan. 6 attack on the Capitol. “The President of the United States helped organize and incite a mob that attacked the United States Congress in an attempt to prevent us from completing our solemn duties as prescribed by the Constitution,” the congressman said as he explained his vote for impeachment, adding, “During the attack itself, the President abandoned his post while many members asked for help, thus further endangering all present. These are fundamental threats not just to people’s lives but to the very foundation of the Republic.”

That vote quickly made Gonzalez radioactive with the party base and enticed Miller, who hails from a very wealthy and well-connected family, to challenge him. Gonzalez raised a serious amount of money to defend his seat, but he acknowledged Thursday, “Politically the environment is so toxic, especially in our own party right now.” The outgoing congressman continued, “You can fight your butt off and win this thing, but are you really going to be happy? And the answer is, probably not.”

COLORADO U.S. SENATOR — Here’s yet another internal poll that tells us very little about an election but is useful for fundraising purposes: Republican Eli Bremer, a former Olympian and Air Force vet, released a survey of next year’s Senate race from co/efficient that shows Democratic Sen. Michael Bennet leading him 40-32. That means 28% of voters—almost as many as pick Bremer—aren’t choosing one of the named candidates. Where will they end up? Who can say, based on fragmentary data like this. But Bremer’s pollster says that his client “is within striking distance” of Bennet (whatever that may mean), which is good enough to stick in a fundraising email or repeat during call time with donors.

NORTH CAROLINA U.S. SENATOR — Former Rep. George Holding, who didn’t rule out a bid for Senate when he announced his retirement from the House back in 2019, has now done just that by endorsing Rep. Ted Budd in the GOP primary for retiring Sen. Richard Burr’s seat.

OREGON GOVERNOR — At the end of an interview about the ongoing battle over redistricting underway in Oregon, state House Minority Leader Christine Drazan, the top Republican in the chamber, declined to rule out a bid for governor when directly asked. Given the context, though, Drazan may simply have been disinclined to give an inch to her chief adversary, House Speaker Tina Kotek, who is running for governor.

RHODE ISLAND GOVERNOR — Former Secretary of State Matt Brown entered the busy Democratic primary for governor on Wednesday as part of a slate of progressive candidates running under the umbrella of a group called the Rhode Island Political Cooperative. The organization, which Brown helped found in 2019, enjoyed great success last year, when it helped oust eight conservative Democrats in the legislature.

Brown, however, has not done well at the ballot box since ousting incumbent Secretary of State Edward Inman in the Democratic primary in 2002 at the age of 32. He dropped out of the 2006 race for Senate amid a campaign finance scandal, then, after a long absence from the Rhode Island political scene, challenged then-Gov. Gina Raimondo in 2018, losing the primary 57-34.

OHIO U.S. SENATOR — Donald Trump used Monday to make it clear he opposed the fledgling Republican primary campaign of state Sen. Matt Dolan, though it’s not because the legislator blamed Trump for instigating the Jan. 6 attack.

Instead, the GOP leader went after Cleveland’s Major League Baseball team, which Dolan co-owns, over its recent decision to change its name. “Anybody that changes the name of the once storied Cleveland Indians to the Cleveland Guardians should not be running for the United States Senate representing the Great People of Ohio,” Trump said in his statement, adding, “In any event, I know of at least one person in the race who I won’t be endorsing.”

WISCONSIN U.S. SENATOR —Lt. Gov. Mandela Barnes has released an internal poll from Clarity Campaign Labs that finds him tied 43-43 in a hypothetical general election with Republican incumbent Ron Johnson. The memo did not include any numbers testing other Democratic primary contenders against Johnson, who also has yet to say if he’ll run again.

ALABAMA GOVERNOR / U.S. SENATOR — Former Ambassador to Slovenia Lynda Blanchard acknowledged this week that she’s considering dropping her Senate campaign so she could instead challenge Gov. Kay Ivey in the GOP primary, though she didn’t indicate when she’d make a decision.