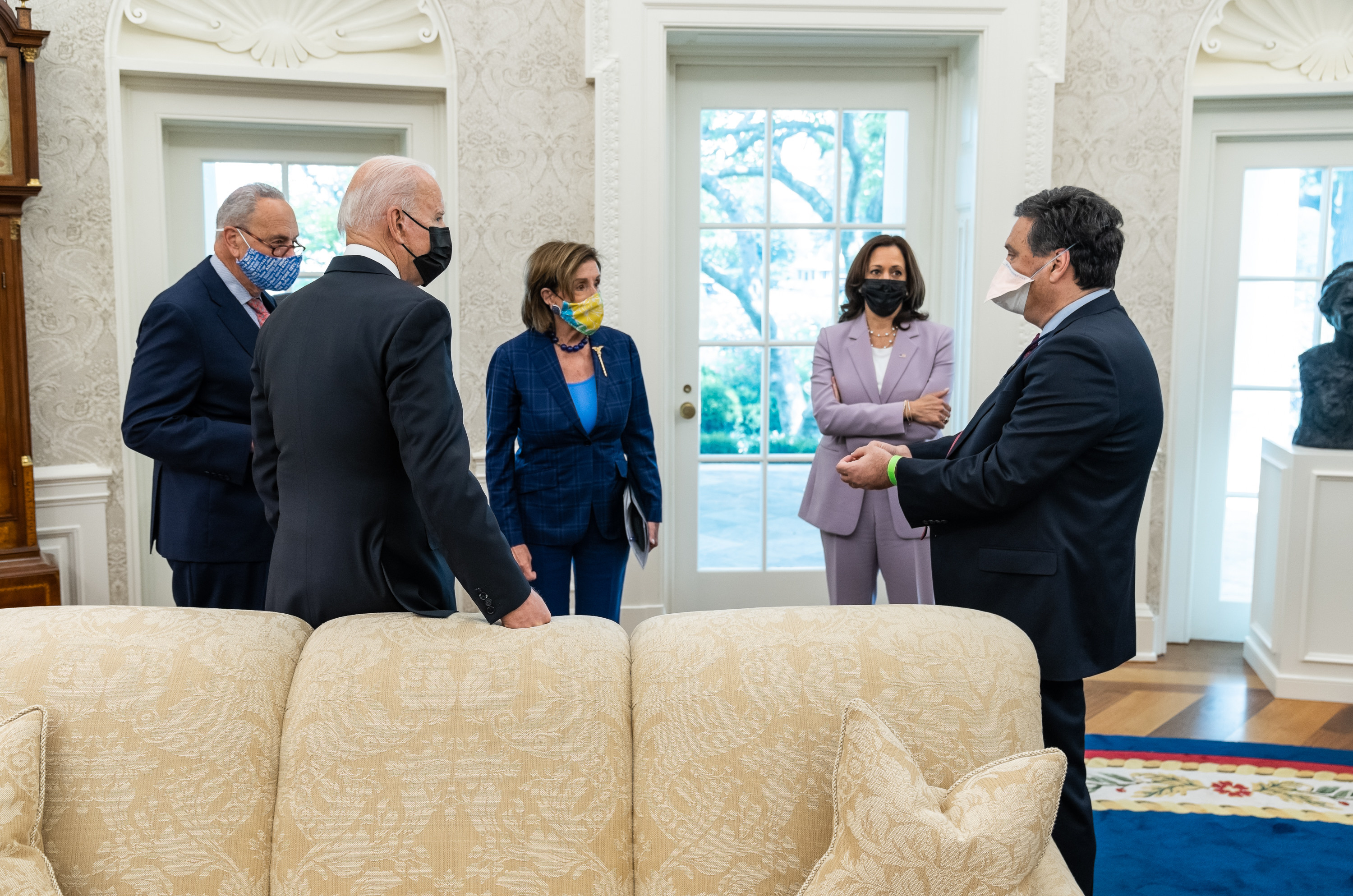 “The Senate vote on the motion to proceed to this bill — which also includes language to suspend the debt limit until Dec. 2022 — will take place on Monday at 5:30 p.m. In case you were wondering, that’s just 72 hours before the government shuts down.”

“Senate Minority Leader Mitch McConnell and Senate Republicans will filibuster this bill, preventing any action on it, and they have more than enough votes to prevent cloture. Democrats will then have to decide on a next step for government funding and the debt limit. This includes moving a debt-limit increase on their own, possibly as part of a separate reconciliation package.”

Speaker Nancy Pelosi has been privately telling House committee chairmen and members that she wants to bring the reconciliation bill to the floor next week, Politico reports.

Playbook: “Pelosi has repeatedly declared herself a ‘master legislator,’ and the cascade of deadlines she’s up against — to avoid a government shutdown, to raise the debt ceiling, to keep her promise of a Monday vote on the BIF, to notch a win for Biden — may be the most difficult legislative gauntlet she’s ever faced. Still, at this point, it makes a certain amount of sense to try and package everything together and ram it through as quickly as possible.”

“Pelosi said Congress wouldn’t let government funding expire next week, the first hint that Democratic leaders might decouple the government’s funding from a contentious increase in the debt limit, on the same day that the Biden administration began preparing for a possible partial shutdown,” the Wall Street Journal reports.

Five House Republicans have announced they will back the bipartisan infrastructure bill when it comes up for a vote next week despite the GOP leadership whipping members against it, The Hill reports.

“The five Senate Republicans who helped negotiate and draft the $1.2 trillion bipartisan infrastructure bill have been privately courting their Republican colleagues to pass the measure in the House,” Axios reports.

“House GOP leaders are actively urging their members to oppose the bill. The senators are working to undercut that effort as Monday shapes up as a do-or-die moment for the bipartisan bill.”

Speaker Pelosi declined to give details on the tax “framework” reached with the Senate and White House but called it “a giant step forward.”

When a Roll Call reporter noted how it’s hard to understand how it’s a giant step forward without details, Pelosi said: “That’s your problem, not mine.”Politico: Democrats hatch secret pay-for-it plan in bid for unity on spending dreams

Punchbowl News says what Democrats have called a framework for taxes in the budget reconciliation bill isn’t much more than a list of options.

“The main story here, as far as we can tell, is that Democrats are now trying to change the conversation from ‘The party is a mess’ to ‘We’re making progress.’”

“We know nothing about this framework — and it doesn’t seem like anyone else does either. We just know that Democrats say they have come to a decision on a group of pay fors — which essentially means that they haven’t decided on what pays that they want to use.”

During an intense meeting at the White House on Wednesday, Rep. Pramila Jayapal (D-WA) broke into tears while arguing her case to President Biden that the reconciliation bill should include a pathway to citizenship for Dreamers, essential workers and farm workers, Politico reports.

A source in the room interpreted the tears as a sign that Jayapal was overwhelmed by the situation and “feeling the pressure.”

A lawsuit filed on behalf of Donald Trump contains what some people might interpret as a statement that Trump lost the 2020 presidential election, in that he is identified as now being a private citizen rather than the president, the Westchester Business Journal reports.

The complaint states that Trump “is, as of the commencement of this action, a private citizen of the United States and a resident of the State of Florida in the County of Palm Beach.”

Former President Donald Trump says Sens. Mike Lee (R-UT) and Lindsey Graham (R-SC) should be “ashamed” of themselves for not fighting harder to prove his false claims of election fraud, the Deseret News reports.

Trump said he spent virtually no time with Lee and Graham talking about the “2020 Presidential Election Scam or, as it is viewed by many, the ‘Crime of the Century.’”

He added: “Lindsey and Mike should be ashamed of themselves for not putting up the fight necessary to win. Look at the facts that are coming out in Arizona, Georgia, Michigan, Pennsylvania, Wisconsin, and other States.”

Former White House chief of staff Mark Meadows, former communications official Dan Scavino, former Defense Department official Kash Patel, and former Trump advisor Steve Bannon were all in touch “with the White House on or in the days leading up to the January 6th insurrection,” the committee said in a release.

“Steven Hatfill, a virologist who advised White House trade director Peter Navarro and said he was intimately involved in the pandemic response, repeatedly described in the emails how ‘election stuff’ took precedence over coronavirus, even as the outbreak surged to more than 250,000 new coronavirus cases per day in January.”

Senate Republican Leader Mitch McConnell (R-KY) believes the Republican Party is moving away from Trumpism and views the former president as a weight on his chances of reclaiming the majority next year, the Lexington Herald Leader reports.

In comments to the authors of Peril, McConnell called Trump, “a fading brand. Retired. OTTB as they say in Kentucky — off-the-track Thoroughbred.”

He added: “Sucking up to Donald Trump is not a strategy that works.”

Sen. Lindsey Graham (R-SC) has told colleagues that former President Trump has conceded in recent private conversations that Sen. Mitch McConnell (R-KY) “helped” him during his four years in office, even as the former president rails against the Republican leader in public, The Hill reports.

“I will continue to support him because I think he’s been extraordinarily effective, but should he decide to step down and no longer serve as a leader, I’ve made it no secret that I would like to succeed him.”  — Sen. John Cornyn (R-TX), quoted by the Texas Tribune, on Senate Minority Leader Mitch McConnell (R-KY).

ISIS-K is growing in power by recruiting disgruntled militants from across central Asia to join its fight against the Taliban, the Times of London reports.

Strict punishments such as amputations and executions will return in Afghanistan, the Associated Press reports.

“Executions of convicted murderers were usually by a single shot to the head, carried out by the victim’s family, who had the option of accepting ‘blood money’ and allowing the culprit to live. For convicted thieves, the punishment was amputation of a hand. For those convicted of highway robbery, a hand and a foot were amputated.”

“Alaska, once a leader in vaccinating its citizens, is now in the throes of its worst coronavirus surge of the pandemic, as the Delta variant rips through the state, swamping hospitals with patients,” the New York Times reports.

“It’s the third time in two weeks that the daily record has been broken.”

“More Texas hospitals are reporting a shortage of ICU beds than at any other time since the Covid-19 pandemic hit the state 18 months ago — just one sign among many that the health crisis is on track to reach its most dangerous phase yet,“ the Texas Tribune reports.

“The latest surge of the virus has also caused new cases and COVID-19 hospitalizations to rise with record speed to just below their January peaks, as the highly contagious delta variant rips through the unvaccinated community at a rate up to eight times faster than earlier strains.”

“The director of the Centers for Disease Control and Prevention on Friday overruled a recommendation by an agency advisory panel that had refused to endorse booster shots of the Pfizer-BioNTech Covid vaccine for frontline workers,” the New York Times reports

“It was a highly unusual move for the director, Dr. Rochelle Walensky, but aligned C.D.C. policy with the Food and Drug Administration’s endorsements over her own agency’s advisers.”

“Opposition from a single moderate Democrat to corporate and income tax rate increases has revived efforts in the Senate to draft a tax on carbon dioxide pollution as a way to pay for the Democrats’ proposed $3.5 billion budget bill,” the New York Times reports.

“Senator Kyrsten Sinema of Arizona has not advocated a carbon tax, which President Biden and other key Democrats have shied away from as a huge political risk. But her resistance to tax rate increases to pay for the Democrats’ ambitious social policy and climate legislation has set off a scramble for alternatives — at the very least to show her how difficult it would be assemble a package without those rate hikes.”

Robert Kagan: “The United States is heading into its greatest political and constitutional crisis since the Civil War, with a reasonable chance over the next three to four years of incidents of mass violence, a breakdown of federal authority, and the division of the country into warring red and blue enclaves. The warning signs may be obscured by the distractions of politics, the pandemic, the economy and global crises, and by wishful thinking and denial.”

“But about these things there should be no doubt: First, Donald Trump will be the Republican candidate for president in 2024. The hope and expectation that he would fade in visibility and influence have been delusional. He enjoys mammoth leads in the polls; he is building a massive campaign war chest; and at this moment the Democratic ticket looks vulnerable. Barring health problems, he is running.”

“Second, Trump and his Republican allies are actively preparing to ensure his victory by whatever means necessary.”

“When Janet Yellen was Federal Reserve chair in 2014, she faced a grilling from Republicans about whether the federal government had a plan if the nation’s borrowing limit was breached and measures to keep paying the country’s bills were exhausted,” the New York Times reports.

“Ms. Yellen, appearing at a congressional hearing, outlined a dire scenario in which financial institutions might try to make payments that they could not cover, because the Treasury Department was out of money, leading to a cascade of bounced checks. She pushed back against the notion held by some Republicans that an economic meltdown could be averted, warning that there was no secret contingency plan.”

“Fending off such a calamity is now squarely the responsibility of Ms. Yellen, who is confronting the biggest test she has faced in her eight months as President Biden’s Treasury secretary.”

Leonard Steinhorn says Trump is losing the culture war: “This does not mean that a path to a more liberal America is inevitable or will be friction-free. Trump’s damage to our democratic institutions could be massive especially if he and his supporters in Republican-run states continue to interfere with elections and voting rights. And his impact on the courts and fights over manufactured issues such as critical race theory and transgender athletes may delay changes, or make them more difficult to enact.”

“Yet, the ‘age of Reagan’ taught us that those who shout the loudest about a world that’s passing them by may not be the ones wielding the most influence when it comes to the social and cultural metamorphosis that will reshape our lives and country in the years and decades ahead.”

“The wealthiest 400 families in the United States are paying an average income tax rate of just 8.2%, according to a new analysis from the Biden administration,” CBS News reports.

Fox News: “A top adviser to the former president says that with the onset of autumn, Trump’s moved his residence and political operation back to his Mar-a-Lago resort in Palm Beach, Florida.”

German health authorities announced the government would no longer help companies pay for the salaries of unvaccinated workers who have to quarantine, the New York Times reports.

The U.S. and Israel held secret talks on Iran last week to discuss a possible “plan B” if nuclear talks are not resumed, Axios reports.