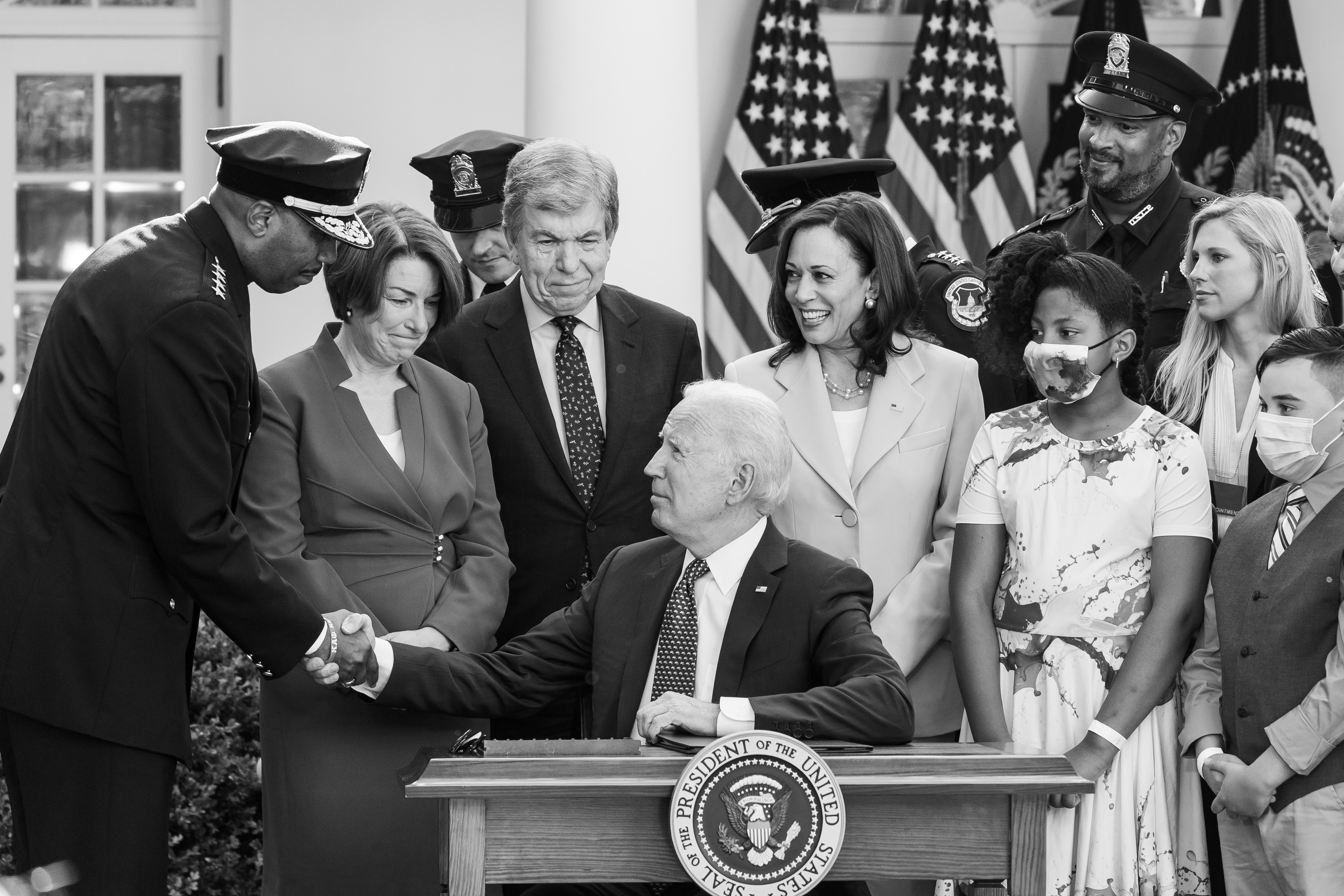 “A Republican-commissioned review of nearly 2.1 million ballots cast last year in Arizona confirmed the accuracy of the official results and President Biden’s win in Maricopa County,” the Washington Post reports.

“After nearly six months and almost $6 million — most of it given by groups that cast doubt on the election results — the draft report shows that the review concluded that 45,469 more ballots were cast for Biden in Maricopa County than for Trump, widening Biden’s margin by 360 more votes than certified results.”

Arizona Republic: “The draft reports reviewed by The Republic minimize the ballot counts and election results and instead focus on issues that raise questions about the election process and voter integrity.”

Deutsche Welle: “Not only is the German election race wide open — many voters say they’re yet to decide whom they will support. Complex coalition numbers, a lackluster campaign and the Angela Merkel vacuum help explain why.”

Said Trump: “Texas needs you to act now. Your Third Special Session is the perfect, and maybe last, opportunity to pass this audit bill. Texans know voting fraud occurred in some of their counties. Let’s get to the bottom of the 2020 Presidential Election Scam!”

“Eight and a half hours after former President Donald Trump made a public demand for Gov. Greg Abbott of Texas to back legislation to create a ‘forensic audit of the 2020 election,’ the Texas secretary of state’s office announced a ‘comprehensive forensic audit’ of the results from four of the state’s largest counties,” the New York Times reports,

“The quick response by state officials in Texas, which Mr. Trump carried last year by more than five percentage points, was the latest example of the former president’s enduring influence over the Republican Party, particularly when it comes to his efforts to undermine public confidence in the legitimacy of his loss last year to President Biden.”

Sen. Chuck Grassley (R-IA) announced that he is running for re-election next year.

IA-Sen: Selzer & Company’s new survey for the Des Moines Register and Mediacom Iowa finds Republican Sen. Chuck Grassley with a huge 55-37 lead over former Rep. Abby Finkenauer, who is the Democratic frontrunner. The incumbent has not yet announced if he’ll seek re-election, though he now said this week his decision will come by Nov. 1.

Said Merrill: “All our  machines are custom-built. There’s no modem component. You can’t influence them through a cell phone or a landline. There’s no way they can be probed or numbers manipulated.”

“Republican super PACs are beating up on the party’s own candidates in key Senate primaries while Democratic groups largely hold their intra-party fire,” Axios reports.

“The negative ads some Republican groups are directing at GOP candidates threaten to elevate damaging stories about them ahead of competitive fights that could determine control of the 50-50 Senate.”

“The risk isn’t just the quantity or volume of Republican-on-Republican attacks; it’s their brutal tone.”

So much for Ronald Reagan’s Eleventh Commandment.

Doubts about President Biden’s competence — on the Afghanistan exit, the border crisis and the pandemic — are driving double-digit drops in his approval in private polling in swing House seats, according to the Cook Political Report.

A new Pew Research poll finds President Biden’s approval rate upside down at 44% to 53%, a sharp decline in his poll numbers since July.

“There also are signs that the public is generally becoming more pessimistic: Just 26% say they are satisfied with the way things are going in the country, down from 33% six months ago. And while views of current economic conditions remain lackluster – 26% rate them as excellent or good – expectations for the economy over the next year have become more negative than they were in the spring.”

A new Gallup poll finds President Joe Biden’s approval rating has fallen six percentage points to 43%, the lowest of his presidency.  For the first time, a majority, 53%, now disapproves of Biden’s performance.  Biden’s declining popularity could pose problems for vulnerable congressional Democrats in 2022.

Said McConaughey: “Well, thank you, man. I’m measuring it. Look, it’s going to be in some capacity… I’m more of a folksy and philosopher poet statesman than I am a, per se, definitive politician.”

He added: “So I go, well, that’s a reason not to, but then I go, no, that’s exactly why you should, because politics needs redefinition, but I’m measuring, you know, what is my category? What’s my embassy?”

McConaughey still has not stated his political party affiliation, if any.

“What makes it feel more personal is that Jurvetson helped raise money for Sinema’s tough campaign in 2018. But the two have since fallen out. On a brusque private call in May that included Jurvetson and the Arizona senator, the two clashed over how Democrats could move on the filibuster, I hear, with the call ending rather abruptly.”

A new Pew Research survey finds that Americans who relied most on former President Donald Trump and the White House coronavirus task force for Covid-19 news in the early days of the pandemic are now among those least likely to have been vaccinated against the virus.

This reinforces criticism of the news media for running Trump’s briefings live.

Former President Donald Trump was asked about a joint fundraising committee — aligned with House Minority Leader Kevin McCarthy — that supports five of the 10 Republicans who voted to impeach Trump this year, Politico reports.

Said Trump: “There are a few of those candidates in very, I would say, blue areas. I almost would rather have the Democrat win, to be honest with you, because we’re going to win a lot of other seats.”

He added: “I’m going to see who McCarthy’s funding and, if he is, I’ll stop the whole deal.”

Michael Cohen told Insider he thinks Donald Trump is bluffing about possibly launching another bid for the White House. Said Cohen: “His insatiable need for attention is one reason he continues to flaunt this disingenuous 2024 run.”

He added: “The other is he’s making more money doing that than anything he has ever done before.”

NJ-Gov: A new poll from Monmouth University finds Democratic Gov. Phil Murphy with a 51-38 lead on former Republican Assemblyman Jack Ciattarelli, little changed from his 52-36 advantage last month. A recent Ciattarelli internal had Murphy up just 45-42, but outside GOP groups have not swooped in with the kind of spending you’d expect if this race were competitive.

Andrew Yang unveiled the name of his new third party in his forthcoming book and it will be called “The Forward Party,” Insider reports.

Reuters: “Reuters interviewed 9 of the 15 declared Republican candidates for secretary of state in five battleground states — Arizona, Georgia, Wisconsin, Michigan, Nevada — and reviewed public statements by all of the candidates. Ten of the 15 have either declared that the 2020 election was stolen or called for their state’s results to be invalidated or further investigated.”

“Only two of the nine candidates Reuters interviewed said that Biden won the election.”

“Stacey Abrams this week launched an ambitious national tour that will stretch across months and many swing states ahead of the 2022 midterms — and potentially elevate her standing in the Democratic Party in the process,” Axios reports.

“To the delight of his loyal fans and dismay of his equally fierce critics, former two-term Republican Gov. Paul LePage will announce his bid to unseat Maine’s incumbent Gov. Janet Mills on Wednesday,” the Portland Press Herald reports.