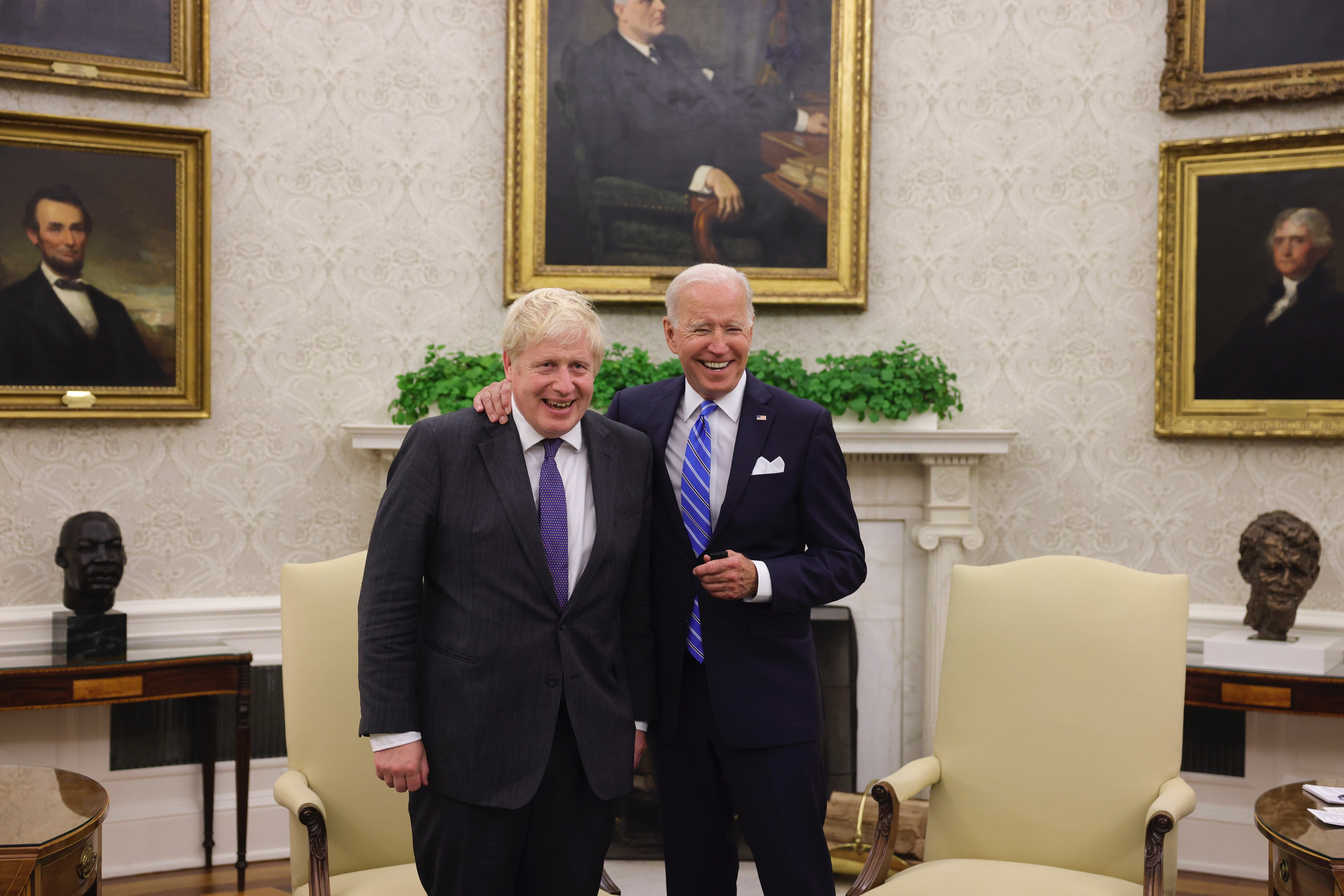 “Speaker Nancy Pelosi (D-CA) began her infrastructure endgame Tuesday, pressuring centrists to ultimately support as much social spending as possible while pleading with progressives to pass the roads-and-bridges package preceding it,” Axios reports. “Neither group can achieve what it wants without the other, their ultimatums be damned. The leaders of both acknowledged the speaker’s unique gift for pulling off a deal after separate conversations with Democratic leaders.”

“The White House also is ramping up the pressure, specifically targeting the centrists.”

Rep. Pramila Jayapal (D-WA) says she has the votes to block the bipartisan infrastructure bill next Monday because the reconciliation bill is nowhere close to being finished, Punchbowl News reports. At around 5 p.m. on Tuesday, Jayapal exited Speaker Nancy Pelosi’s office suite and seemed to indicate that Pelosi was on the brink of delaying the infrastructure bill. Said Jayapal: “don’t think that the speaker is going to bring a bill up that is going to fail.”

“President Biden met Wednesday with warring Democrats in an urgent effort to rescue his first-term agenda from potential collapse, attempting to broker a political truce that would foster passage of roughly $4 trillion in new economic spending initiatives,” the Washington Post reports.

“Biden’s three high-stakes meetings — with party leaders and top members of its liberal and moderate factions — came five days before the House planned to take up a package to improve the nation’s infrastructure that could be doomed unless Democrats of all stripes unify behind it.”

New York Times: “In essence, Mr. Biden’s entire agenda faces a make-or-break moment, with an array of policy disagreements — over how large the domestic policy package should be and how to pay for and structure the programs it funds — standing in the way of action on any of it.”

Punchbowl News: “There’s a real danger at this point — as we’ve been warning — that both the $1 trillion bipartisan infrastructure bill and the $3.5 trillion reconciliation package could be derailed by this infighting.”

“This would be catastrophic for the Democratic majority and the White House. Democratic leaders on the Hill have quietly been begging for Biden to wade in — and that’s now happening.”

“John Podesta, a former chief of staff to President Bill Clinton and an influential figure among Democrats in Washington, called on lawmakers in his party on Wednesday to pare back a proposed $3.5 trillion social policy plan that carries much of President Biden’s domestic agenda,” the New York Times reports. “If they do not, he warned, they risk failure to pass the legislation — and the loss of their congressional majorities next year.”

Sen. Joe Manchin (D-WV) told CNN that he hasn’t spoken with President Biden since they met last week and that he doesn’t have a new offer for today’s meetings at the White House.

When asked if he thinks a deal on the budget reconciliation bill can come together by next week, Manchin said: “Don’t think so.”

“The House on Tuesday passed legislation that would prevent a government shutdown and suspend the debt limit ahead of looming deadlines with only days to spare, although the measure is set to run into a GOP wall in the Senate,” The Hill reports.

Washington Post: “The high-stakes feud stems from a fight to raise the U.S. government’s borrowing limit, known as the debt ceiling. Democrats have tied the increase to a bill that funds federal operations into early December, setting off a war with Republicans, who refuse to raise the cap out of opposition to President Biden’s broader agenda — even if it means grinding the country to a halt.”

“No recent fight in the halls of Congress has quite carried the same stakes as this one, coming at a time when Washington continues to grapple with rising coronavirus infections and the deadly consequences of a fast-warming planet. Biden himself has warned about the ‘catastrophic’ effects of inaction with key deadlines looming.”

“One idea that we heard from Senate Democrats is Republicans can let Schumer get onto a clean government funding bill and then let Democrats pass it with 50 votes on their own,” Punchbowl News reports.

But Sen. John Thune (R-S.D.) ended those hopes: “No. We got members who publicly said that they would filibuster the cloture vote.”

Politico: “If Senate Republicans hold the line next week [making good on their filibuster threat] and in the run-up to October’s potential default date, it would leave just two options: A strategic reversal by Democrats or a default. What’s more, Republicans’ debt ceiling tactics add to Democrats’ pileup of complications as they struggle to pass Biden’s jobs and families plan…”

“Neither side is showing any sign of backing down, and they’re both predicting someone will cave as the possibility of default becomes a reality. Democrats are betting that as the deadline gets closer, Republicans will begin to feel pressure from the business community and the necessary 10 will sign on to a debt suspension. Meanwhile, Republicans are assuming Democrats will eventually go it on their own, not wanting to be blamed for a debt default while they control Washington.”

Punchbowl News: “Funding for federal agencies runs out on Sept. 30. While we don’t believe there’ll be a shutdown, neither side has been willing to back down yet, so it’s a distinct possibility at this point. There’s more time to deal with the debt limit, although not too much more. Treasury Secretary Janet Yellen has warned that the federal government will run out of the ability to obtain new loans sometime in October.”

Moody’s Analytics says “a prolonged impasse over the debt ceiling would cost the U.S. economy up to 6 million jobs, wipe out as much as $15 trillion in household wealth, and send the unemployment rate surging to roughly 9 percent from around 5 percent, the Washington Post reports.

Aaron Blake: “The last quarter-century has featured an increasing number of such standoffs, with Republicans generally seeking something from a Democratic president to rein in spending. In almost every case, though, Republicans wound up bearing most of the blame, and they rarely got much in the way of concessions to show for it.”

Just before a team of lawyers associated with Donald Trump claimed a bizarre conspiracy about voting machines in the 2020, Trump campaign staff prepared a memo concluding that the theories were false, the New York Times reports.

The existence of the memo was revealed in a defamation lawsuit against the Trump campaign.

“There has never been a situation where military aid for Israel was held up because of objections from members of Congress. While the funding will get a vote in its current defense bill, the clash underscores the deep divisions within the Democratic Party over Israel.”

Former President Trump filed a lawsuit against the New York Times and his niece Mary Trump over the news outlet’s reporting on his tax records, the Daily Beast reports.

The lawsuit alleges that the newspaper convinced Mary Trump to “smuggle records out of her attorney’s office and turn them over to The Times” despite her having signed a confidentiality agreement in 2001.

The new suit seeks damages “in an amount to be determined at trial, but believed to be no less than One Hundred Million Dollars” from both Mary Trump and the Times.

Mary Trump responded: “I think he is a fucking loser.”

“Even as Biden confronts attacks from Republicans portraying his policies as weak and ineffective, many immigrant-rights activists have increasingly concluded that Biden has failed to live up to his campaign vows to defend vulnerable foreigners seeking a better life in the United States. Their fury marks a new inflection point in Biden’s ongoing struggles with immigration.”

“Texas Gov. Greg Abbott (R) has sent a fleet of state-owned vehicles to line up for miles as a barricade along the border with Mexico, insisting the state was taking ‘unprecedented steps,’ as thousands of migrants still seek to cross into the United States,” the Washington Post reports.

“Federal Reserve officials indicated on Wednesday that they expected to soon slow the asset purchases they have been using to support the economy and predicted that they might raise interest rates next year, signs that policymakers are preparing to pivot away from full-blast monetary help as the business environment snaps back from the pandemic shock,” the New York Times reports.

The House Select Committee investigating the storming of the U.S. Capitol could authorize subpoenas for top Trump White House aides as early as this week, The Guardian reports.

Playbook: “The House minority leader has made clear he opposes BIF, but he’s also under increased pressure to take the next step and urge his members to oppose it. On Tuesday, one of his allies, Republican Study Committee Chair Jim Banks (R-IN), became the latest member to call on McCarthy to muscle votes in opposition. McCarthy is also getting an earful from the House Freedom Caucus, whose support he needs to become speaker someday.”

“And don’t forget about Donald Trump, who ironically called for a big infrastructure bill as president but is now demanding they oppose the one Democrats are pitching. Will Trump lean on McCarthy to do more?

This suggests it will be harder for Nancy Pelosi to rely on GOP votes to pass the bill when it comes up for a vote next week.

Former French ambassador Gerard Araud to the New Republic: “Obama didn’t care about Europe. Trump was hostile to Europe. And here you have Biden. And Biden, to be frank so far, is a big disappointment all over Europe.”

He continued: “The administration has no European policy… When Biden went to Europe, he was patting the shoulders of everybody and the back of everybody, the way he’s very good at doing it. But there was no outcome… The Americans are shifting to China. So they have a foreign policy: China, China, China.”

“I just think it’s time for some of our dearest friends around the world to prenez un grip about all this and donnez-moi un break. Because this is fundamentally a great step forward for global security.”  — British Prime Minister Boris Johnson, mocking French outrage over the U.S.-U.K. nuclear submarine deal with Australia.

“President Joe Biden was expected to speak Wednesday with French President Emmanuel Macron as the U.S. looks to stem the fallout from France’s fury over a deal to sell nuclear-powered submarines to Australia,” NBC News reports.

President Biden announced that the U.S. is donating an additional 500 million Pfizer Covid-19 vaccines to low- and lower-middle income countries around the world, bringing the U.S. total global donation to over 1.1 billion doses.

Said Biden: “America will become the arsenal of vaccines, as we were the arsenal for democracy during World War II.”

“Bipartisan talks aimed at overhauling police tactics and accountability have ended with no agreement, the top Democratic negotiator said, with lawmakers unable to reach a compromise in the wake of nationwide protests sparked by the killings of Black Americans by law-enforcement officers,” the Wall Street Journal reports.

“Here’s the big thing that hit me: Democrats didn’t go after the huge accumulations of wealth at the top – representing the largest share of the economy in more than a century.”

“You might have thought they’d be eager to tax America’s 660 billionaires whose fortunes have increased $1.8 trillion since the start of the pandemic – an amount that could fund half of Biden’s plan and still leave the billionaires as rich as they were before the pandemic began.”