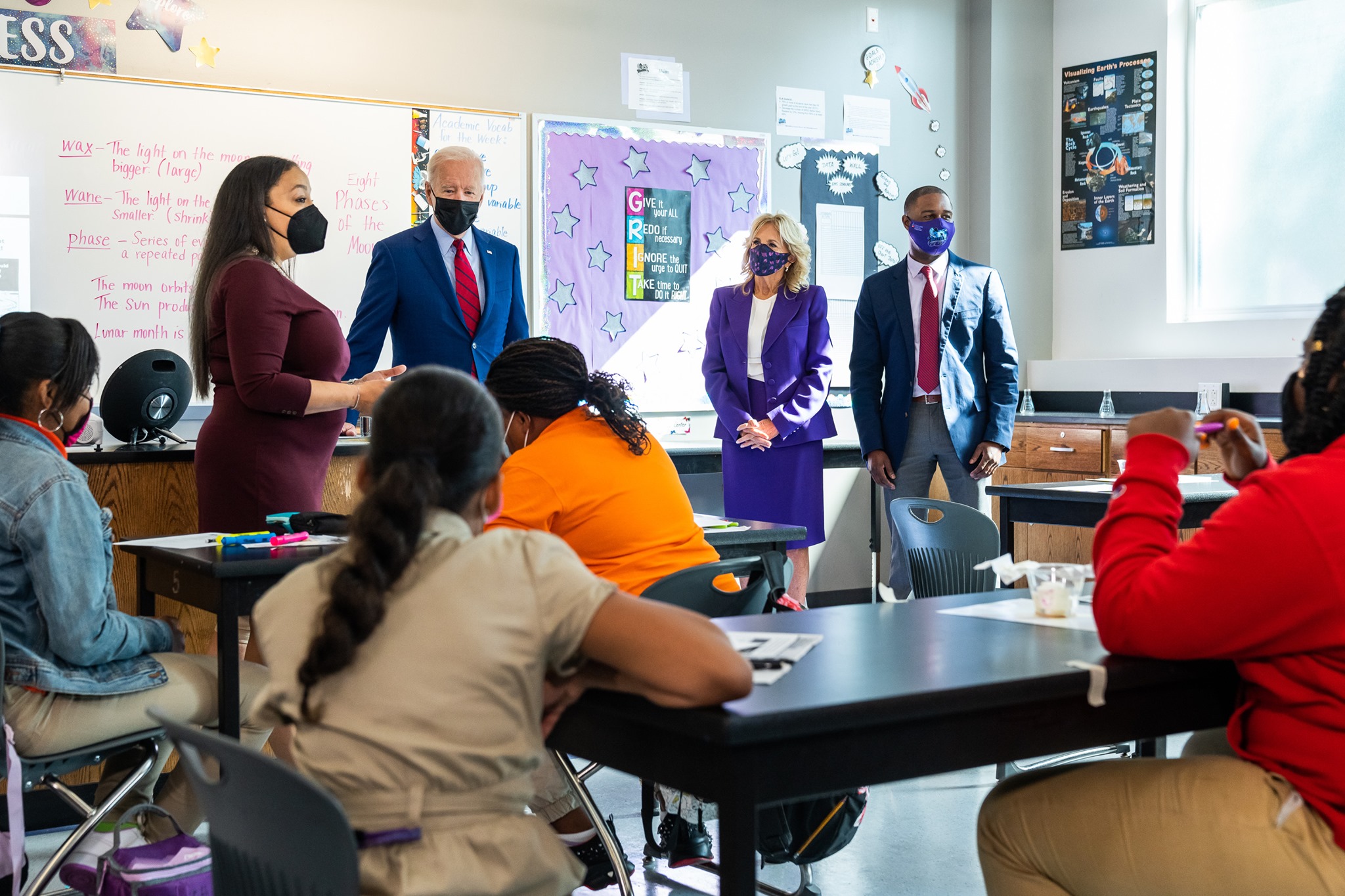 The FiveThirtyEight polling average shows Terry McAuliffe (D) with a very small lead over Glenn Youngkim (R), 47.2% to 44.1% in the Virginia Governor’s race.

A new poll for the Washington Post and George Mason University’s Schar School, conducted by Abt Associates, finds McAuliffe leading Youngkin 50-47 among likely voters. It’s the Post’s first survey of the race, but likely every other nonpartisan poll (and, in fact, every poll except for a single Youngkin internal), it has McAuliffe ahead. It did not, however, test Virginia’s two other statewide contests on the ballot this fall, for attorney general and lieutenant governor.

“Democrats are trying to unseat only about half as many Republican House members next year as they did in 2020, trimming their target list from 39 to 21,” Axios reports.

“The narrowing map — which reflects where Democrats see their best chance of flipping seats — is the latest datapoint showing the challenging political landscape the party faces in the crucial 2022 midterms.”

“The once-a-decade redistricting process, Donald Trump’s exit from the White House and a razor-thin House majority that requires more focus on protecting incumbents are among the factors at work.”

David Wasserman: “All over the Deep South—in states such as Alabama, Louisiana, Mississippi, and South Carolina—the story is familiar: Gerrymandered maps have packed Black voters into a lone Voting Rights Act district, while Republicans dominate every surrounding white-majority seat. In past decades, many of those VRA districts’ Democratic representatives were loath to unravel their own safe seats. But today, Democrats’ prevailing mentality has shifted. And as the 2022 redistricting wars heat up, multiple lawsuits aiming to unpack hyper-minority seats could help determine control of the House.”

IOWA — A new Des Moines Register poll finds just 31% of Iowans approve of how President Biden is handling his job, while 62% disapprove and 7% are not sure.

“That’s a 12 percentage point drop in approval from June… Biden’s disapproval numbers jumped by 10 points during the same period. In June, 43% approved and 52% disapproved.”

“The problem for Biden is that the exit poll indicates clear leakage in his support from a year ago… Assuming Democrats get about 90% of the pro-Biden vote and lose about 90% of the anti-Biden vote nationwide, it would mean they would very likely lose the national House vote.”

Faulconer, who spent several years as one of the GOP’s few rising stars in California before bombing on Tuesday, doesn’t seem deterred by all this, though. The ex-mayor indicated he was interested in another run next year in an election night speech, declaring, “I’m not one that’s part of a circus. I’m the guy that comes in to end the circus.” He added, “Tonight was round one; there’s more to come.”

But Elder, of all people, seems to have finally acknowledged how unlikely it is that he or any other California Republican can win in 2022. While the radio host sounded very likely to try again after losing on Tuesday, he said later in the week, “It’s hard to see how the outcome would be any different unless I was able to raise at least as much money as Gavin Newsom has spent, but even then the thing is daunting.” Elder added, though, “I may change my mind over the next coming days.”

TEXAS GOVERNOR — Axios reports that former Democratic Rep. Beto O’Rourke is “expected” to announced a bid for governor “later this year,” according to unnamed “Texas political operatives,” though a spokesman for O’Rourke told the website, “No decision has been made.” In the spring, O’Rourke declined to rule out a campaign.

While Ciarrocchi’s only previous stint in elected office appears to be his time as supervisor of Tredyffrin Township in the mid-2000s, which took place between his narrow 1992 and 2008 defeats for the state House, he has some notable political connections. Among other things, Ciarrocchi led George W. Bush’s unsuccessful 2004 campaign to win Pennsylvania’s electoral votes and served as chief of staff to then-Rep. Jim Gerlach and Lt. Gov. Jim Cawley.

Cawley, whom the Philadelphia Inquirer says that some Republicans have wanted to run here, is instead chairing Ciarrocchi’s campaign; Gerlach, for his part, was mentioned as a candidate back in July, but we’ve heard nothing from him since.

The Oregon State Building and Construction Trades Council has backed state Speaker Tina Kotek in what Oregon Capitol Insider identifies as “a key labor endorsement” in the Democratic primary.

NEW JERSEY GOVERNOR — Republican Jack Ciattarelli’s campaign has publicized a survey from National Research that shows him trailing Democratic incumbent Phil Murphy just 45-42 ahead of the November general election; the memo says that unreleased surveys from April and June found Murphy ahead 47-30 and 49-37, respectively. Ciattarelli’s allies at the Club for Growth recently released their own poll from Fabrizio Lee that gave the governor a similar 43-41 lead, but Monmouth University found the Democrat up 52-36 a little more than a month ago.

ARIZONA GOVERNOR — Democratic state Rep. Aaron Lieberman said Monday that he was resigning from the legislature in order to focus on his campaign for governor.

NEVADA GOVERNOR — Dean Heller, the Nevada Republican who was ousted from the Senate during the 2018 blue wave, announced Monday that he would seek the nomination to take on Democratic Gov. Steve Sisolak. The former senator used his first day on the campaign trail to tack to the right in a state that narrowly voted for both Hillary Clinton and Joe Biden, saying of Texas’ infamous new abortion law, “I like what Texas did.”

Heller may feel the need to cover his right flank because he faces serious opposition in next year’s primary. The field includes Clark County Sheriff Joe Lombardo, whose jurisdiction includes over 70% of the state, and North Las Vegas Mayor John Lee, who defected from the Democratic Party earlier this year. Rep. Mark Amodei has also pledged to make his own decision in October, though the congressman sounded lukewarm about the idea last week when he expressed his trepidation about the primary becoming a “soundbite fest.”

Kristy Ronchetti used a Facebook comment on Monahan’s page to say, “We want to help serve the people of this state and we want to see it do better… I’m not sure it will be in a political arena or not – but it won’t stop us for fighting for the people we’ve gotten to know, respect and heard.” Kristy Ronchetti, writes Monahan, also “expressed discontent that the story was published here but notably her comment does not close the door on her husband running.”

MARYLAND GOVERNOR — VoteVets has endorsed former nonprofit head Wes Moore, an author who previously served as a paratrooper in Afghanistan, in the Democratic primary for this open seat.

Meanwhile on the GOP side, the Washington Examiner’s David Drucker writes that former RNC chair Michael Steele  is “likely” to decide by early November. Steele endorsed Joe Biden last year, and Drucker relays that many of his fellow Republicans aren’t sure why he’s still a member of Team Red, much less a potential candidate. State party Chairman Dirk Haire, who holds the post Steele had in the early 2000s, said, “If his plan over the past couple of years was to run for governor as a Republican, he’s gone about it in an odd way.”

A longshot bid by Steele, though, could still have an impact on the GOP primary to succeed termed-out Republican Gov. Larry Hogan in this very blue state. Drucker writes that some Republicans trying to talk the former RNC chair out of running worry that he could take enough votes from state Commerce Secretary Kelly Schulz to hand the nomination to Del. Dan Cox, who played a role in the Jan. 6 insurrection at the Capitol by organizing a bus of people to attend the riot.

Mark Barabak writes that California Gov. Gavin Newsom is a “hot commodity” right now after defeating the recall against him and would be a natural presidential candidate.

“But one thing stands in his way: Vice President Kamala Harris.”

Ohio Senate candidate Josh Mandel (R), who has pushed strong anti-refugee messages against Afghans and others, is actually the grandson of refugees from Europe who settled in the Cleveland area with the aid of resettlement organizations after World War II, CNN reports.

Mandel has suggested many refugees are terrorists. He has also said “zero” refugees should be let into the US, claiming Afghan refugees will bring “covid” and “child brides.”