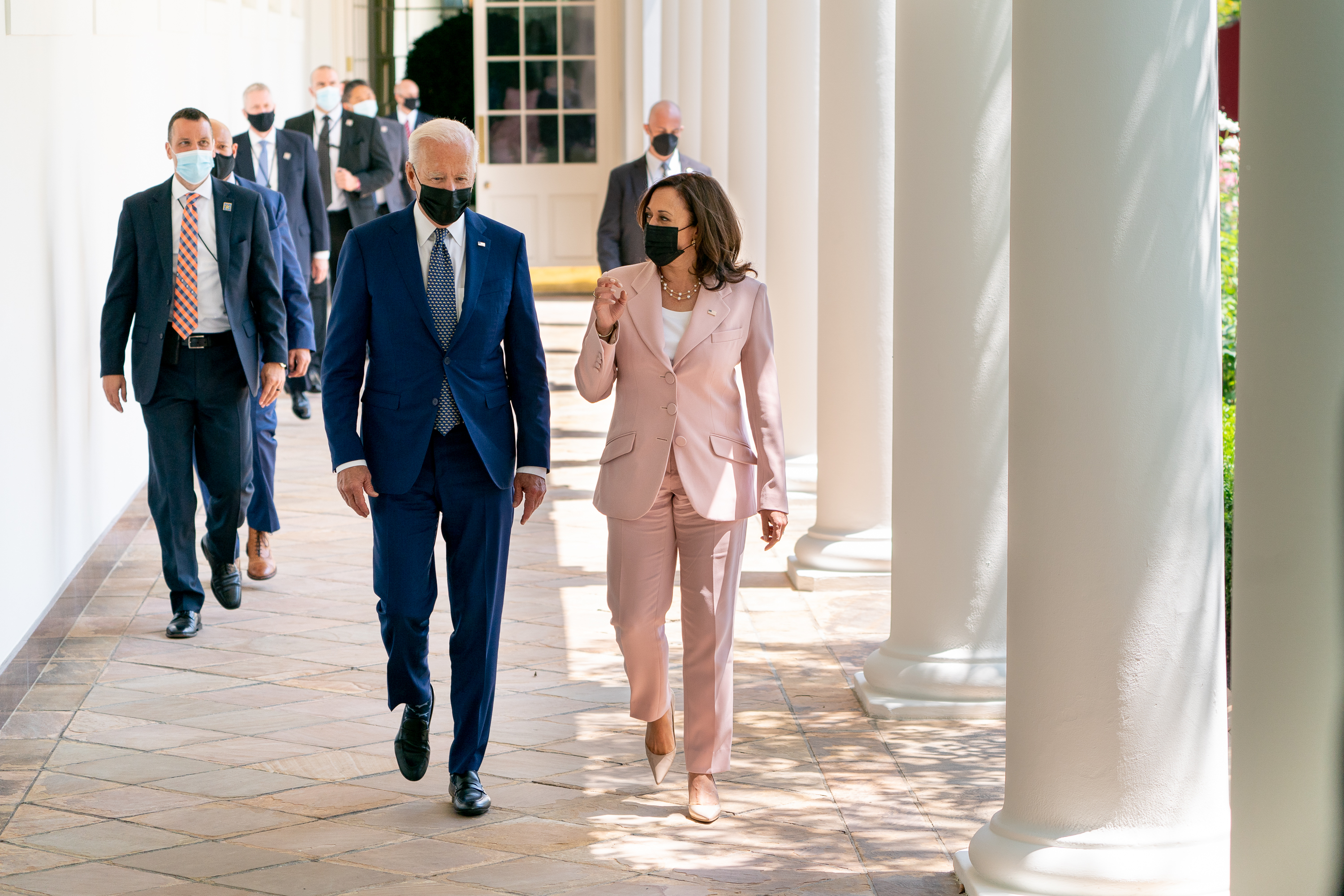 The Pfizer Covid-19 vaccine “has been shown to be safe and highly effective in young children aged 5 to 11 years,” the New York Times reports.

“Children now account for more than one in five new cases, and the highly contagious Delta variant has sent more children into hospitals and intensive care units in the past few weeks than at any other time in the pandemic… If the regulatory review goes as smoothly as it did for older children and adults, millions of elementary school students could be inoculated before Halloween.”

The Biden administration will allow fully vaccinated travelers from around the world to enter the U.S. beginning in November, Axios reports.

The move marks the end of the ban on most European visitors put in place under former President Trump in March 2020.

Sen. Kyrsten Sinema (D-AZ) delivered a tough message to President Biden at a private meeting Wednesday, Playbook reports: If the House delays its scheduled Sept. 27 vote on the bipartisan infrastructure plan — or if the vote fails — she won’t be backing a reconciliation bill.

“Progressives think if they band together and threaten to kill the infrastructure bill, it will convince moderate members to go along with the larger reconciliation package. But multiple sources — including a senior Democratic aide and several in the centrist camp — tell us the left is misreading their colleagues.”

And the centrists (and the DC Punditry like Politico and Axios) are misreading the left. The bills are linked forever. One does not pass without the other. No Reconciliation Bill = No Bipartisan Bill. Simple as that.

“The White House has a new headache as it struggles to get its multitrillion-dollar party-line spending bill passed: Sen. Kyrsten Sinema’s objections to drug pricing reforms that are already struggling to make it through the House,” Politico reports.

“The Arizona Democrat is opposed to the current prescription drug pricing proposals in both the House and Senate bills, two sources familiar with her thinking said. They added that, at this point, she also doesn’t support a pared-back alternative being pitched by House Democratic centrists that would limit the drugs subject to Medicare negotiation.”

“Any delay on the Democrat-only reconciliation package could imperil House passage of the separate $1.2 trillion bipartisan infrastructure bill, which Pelosi has promised to pass by Sept. 27.”

“Joe Manchin, the powerful West Virginia Democrat who chairs the Senate energy panel and earned half a million dollars last year from coal production, is preparing to remake President Biden’s climate legislation in a way that tosses a lifeline to the fossil fuel industry — despite urgent calls from scientists that countries need to quickly pivot away from coal, gas and oil to avoid a climate catastrophe,” the New York Times reports.

“Mr. Manchin has already emerged as the crucial up-or-down vote in a sharply divided Senate when it comes to Mr. Biden’s push to pass a $3.5 trillion budget bill that could reshape the nation’s social welfare network. But Mr. Biden also wants the bill to include an aggressive climate policy that would compel utilities to stop burning fossil fuels and switch to wind, solar or nuclear energy, sources that do not emit the greenhouse gases that are heating the planet.”

Jonathan Bernstein: “There’s no reason to expect passage or rejection of these bills to have strong electoral effects, and if it does matter in November 2022 or November 2024 there’s no guarantee that success would help Democrats.”

“Perhaps the most obvious comparison would be the aftermath of the Democrats’ failure to pass health-care reform in 1993-1994, and then of their triumph in passing the Affordable Care Act in 2009-2010. While those efforts were the most prominent legislative initiatives in both cases, they were surrounded by other fiascos (during the first two years of Bill Clinton’s presidency) and successes (when Barack Obama was president). In both cases, the electoral results were more or less the same — a disaster for the party in the midterms, followed by re-election for Clinton and Obama two years later.”

“That’s hardly the only relevant historical example. The most successful and productive Congress since the New Deal was the one following the huge Democratic landslide of 1964. The electoral fallout? Big Republican gains in 1966 and a Richard Nixon presidency two years later. It’s not that voters hated what that Congress did. It’s just that voters are willing and able to take even brand-new programs for granted and ask, in effect, what have you done for me lately? And if the answer isn’t peace and prosperity, it doesn’t matter what else has happened.”

Speaker Nancy Pelosi announced that House Democrats “will combine a short-term government spending bill with a suspension of the debt limit in a package slated to hit the floor this week,” The Hill reports.

Washington Post: “The plan could face immediate political headwinds since Republicans previously have pledged to vote against an increase in the country’s borrowing limit, even if it is attached to a measure preventing a shutdown — part of a broader GOP effort to scuttle President Biden’s economic agenda.”

“As they presented their plan, Democrats on Monday once again sounded dire warnings about consequences of failure, which they said could destabilize global markets, shutter critical federal services during a pandemic and hold back assistance to millions of Americans in the aftermath of storms that battered the Gulf Coast and parts of the Eastern Seaboard.”

“The House and Senate are both in session today simultaneously for the first time since the end of July. Lawmakers have just 10 days to fund the government ahead of a potential shutdown; federal agencies run out of money on Sept. 30. Congress has to raise the nation’s debt limit by next month as well,” Punchbowl News reports.

“Democratic leaders and the White House face two key decisions right away: What to do on the debt limit, and whether to allow a House floor vote on the $1 trillion bipartisan Senate infrastructure bill next week?”

Politico: “The House and Senate return to Washington together this week with Democrats facing four tasks that would be challenging on their own — but, taken together, are the legislative equivalent of Hercules’ labors.”

Treasury Secretary Janet Yellen warns in the Wall Street Journal:  “The U.S. has never defaulted. Not once. Doing so would likely precipitate a historic financial crisis that would compound the damage of the continuing public health emergency. Default could trigger a spike in interest rates, a steep drop in stock prices and other financial turmoil. Our current economic recovery would reverse into recession, with billions of dollars of growth and millions of jobs lost.”

“The Senate parliamentarian dealt a major setback Sunday to Democrats’ plan to use their $3.5 trillion social policy bill to create a path to citizenship for an estimated 8 million undocumented immigrants,” the New York Times reports.

Washington Post: “Parliamentarian Elizabeth MacDonough, a nonpartisan arbiter of the Senate’s rules who decides technical matters such as whether a mass legalization can be included in the federal budget, knocked down the plan after meeting Democratic and Republican lawmakers.”

“Her decision is a blow to Democrats’ plans to create a path to legal residency for as many as 8 million of the 11 million undocumented immigrants in the United States, including many who have lived here for years. The last major legalization occurred in 1986.”

“The average American’s workweek has gotten 10% longer during the pandemic, according to a new Microsoft study published in Nature Human Behaviour,” Axios reports.

Jonathan Last: “The big surprise of the pandemic—the one thing that nobody saw coming—was the resistance to the vaccines. This was a failure of imagination. No one imagined that 30 percent of the country could watch 674,000 of their neighbors die and still refuse to take a free, life-saving vaccine.”

“No one fully understood the power of negative polarity. Understood that one tribe of Americans hates their neighbors literally unto death. Hates them so much that they would rather risk their own lives than be perceived as doing what ‘the elites’ tell them.”

“The Biden administration arrived in Washington in January with a wind at its back. After months of struggles with Covid-19, a new vaccine seemed poised to tamp down the virus and unleash a period of economic growth,” NBC News reports.

“But something happened on the road to recovery: The Delta variant. Delta turned the summer of independence into a summer of hesitation, and now the great economic boom seems to be locked in a perpetual state of ‘coming soon’ as Americans wonder if there are more twists and turns coming in the Covid pandemic.”

The United States’ reported death toll from Covid-19 will this week surpass the number of dead from the Spanish flu, the South China Morning Post reports.

“The Supreme Court announced Monday it will hear arguments Dec. 1 on a Mississippi abortion restriction that poses a direct challenge to the landmark 1973 ruling in Roe v. Wade,” The Hill reports.

Politico: “In taking the case, the Supreme Court’s conservative supermajority signaled its openness to revisiting and potentially overturning the landmark 1973 decision that legalized abortion nationwide, with a ruling expected next year.”

Venture capitalist and Facebook board member Peter Thiel told an associate that Mark Zuckerberg agreed to not fact-check political posts if the Trump administration would steer clear of any “heavy-handed regulations,” New York magazine reports.

“Natural-gas prices have surged, prompting worries about winter shortages and forecasts for the most expensive fuel since frackers flooded the market more than a decade ago,” the Wall Street Journal reports.

“Mississippi Gov. Tate Reeves (R) downplayed the severity of the coronavirus pandemic in his state on Sunday, while challenging the legitimacy of vaccine mandates rolled out by the Biden administration,” USA Today reports.

Said Reeves: “The reality is this is an attack by the president on hardworking Americans and hardworking Mississippians who he wants to choose between getting a jab in the arm and their ability to feed their families, and I just believe that is a false choice.”

Reeves has previously called new measures to mandate vaccines for a larger swath of Americans by President Biden “tyrannical-type” behavior.

The Atlantic: “Biden’s bet, while risky, grows more solid by the day. Republicans are making a counterargument that they believe their base wants to hear, which would be fine if their base were sufficient to wrest control of Congress from the Democrats. Biden is trying to appeal to a wider audience. Two of the most prized voting blocs in an election—suburban and independent voters—favor Biden’s vaccine-mandate plan by solid margins.”

“Just after the US military launched a Hellfire missile to stop a white Toyota Corolla it believed to be an imminent threat to US troops leading the evacuation at the Kabul airport, the CIA issued an urgent warning: Civilians were likely in the area, including possibly children inside the vehicle,” CNN reports.

“It was too late. The warning on August 29 came seconds before the missile hit the car, killing 10 civilians, including seven children.”

Washington Post: “In 2020, as the pandemic took hold, U.S. health insurance companies declared they would cover 100 percent of the costs for covid treatment, waiving co-pays and expensive deductibles for hospital stays that frequently range into the hundreds of thousands of dollars.”

“But this year, most insurers have reinstated co-pays and deductibles for covid patients, in many cases even before vaccines became widely available. The companies imposed the costs as industry profits remained strong or grew in 2020, with insurers paying out less to cover elective procedures that hospitals suspended during the crisis.”

“The extremist Islamic State group has claimed responsibility for a series of deadly bombings targeting Taliban vehicles in eastern Afghanistan,” the AP reports.

A new study from Rand sounds the alarm about extremists in the military:  “The vast majority of military personnel and their families are not extremists. But even a small number of people engaged in extremist activities could damage the U.S. military’s reputation, its force, its members, and the larger community. Extremist activities can also be harmful to the individuals who are radicalized and their friends and family.”