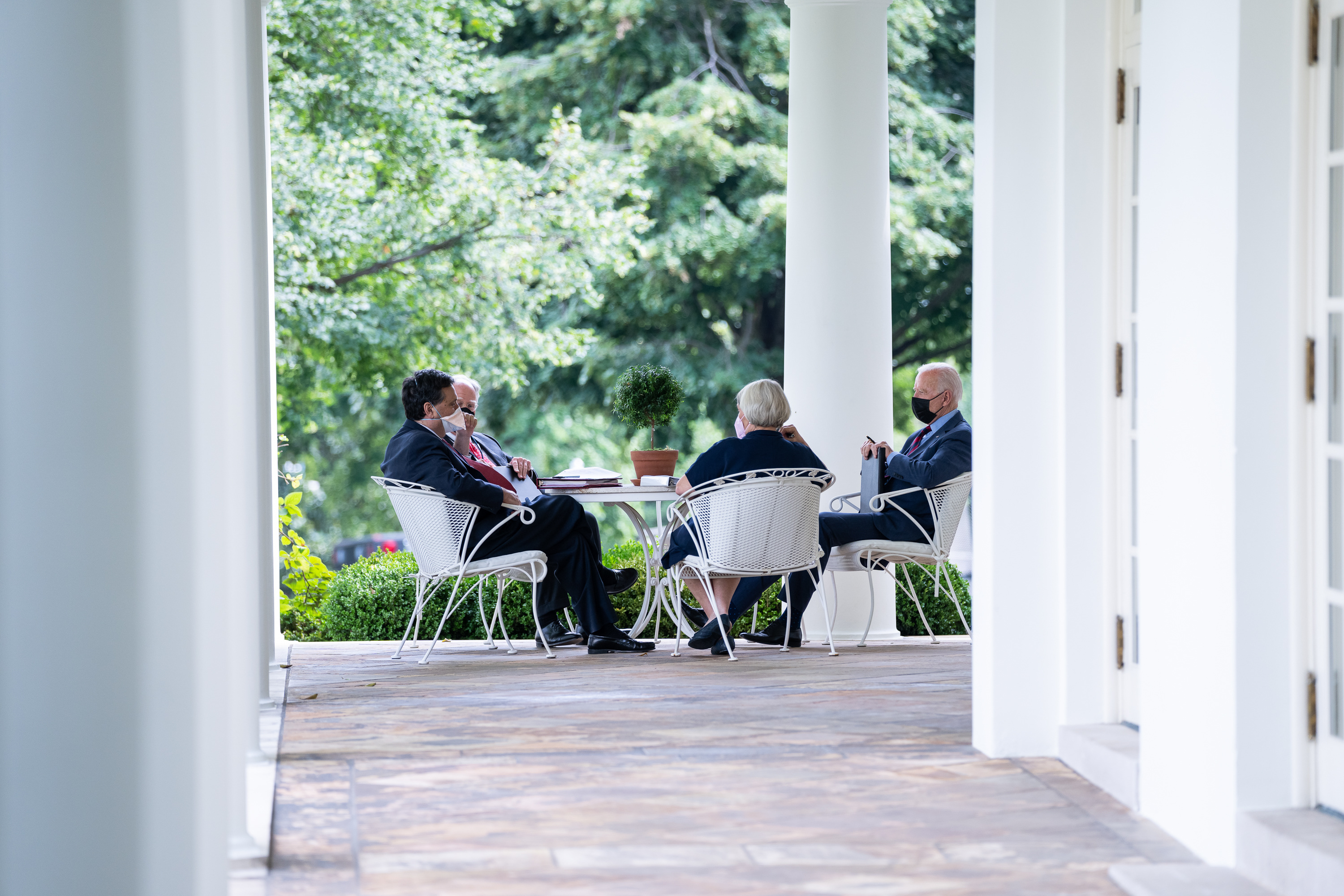 “In the shadow of a fortified Capitol, a few hundred demonstrators turned up Saturday for a rally to support those charged in January’s riot, but were vastly outnumbered by the media and a heavy police presence,” the AP reports.

New York Times: The Capitol area is on high alert.

“The Jan. 6 assault on the Capitol and the falsehoods that inspired it continue to shape the Republican Party, with former president Donald Trump ramping up his defense of the rioters who participated in the violence while marshaling opposition to GOP lawmakers who have denounced the attack as an insurrection and a threat to American democracy,” the Washington Post reports.

“Trump’s willingness to not only sweep the Jan. 6 riot under the rug, but to embrace its perpetrators as political martyrs, has been met with silence by GOP congressional leaders, despite their stated desire to move on from the past and focus the party on opposing President Biden’s governing agenda.”

“France announced on Friday that it is immediately recalling its ambassador to the United States, Philippe Étienne, in protest of President Biden’s announcement of an agreement to provide nuclear-powered submarines to Australia without consulting French officials,” the New York Times reports.

So France is having a little temper tantrum.

Andrew Sullivan: “If the definition of political courage is making big calls crisply and effectively, despite obvious risks and unknowable consequences, then it seems to me that President Biden and Prime Minister Johnson qualify right now. They’ve made calls recently that go beyond the usual mush of compromise and calculation and might even merit being called bold.”

“Biden braved the Blob and got out of Afghanistan. We will debate how he did so, and with what consequences, for quite some time. But he still did it. Obama tried and failed. Trump made a big song and dance and signed a surrender deal. But Biden actually got us out…”

“Equally this week, the sudden and surprise announcement that the UK, the US and Australia would form a new military and intelligence alliance in the Pacific, including new nuclear-powered submarines for Australia, was a bold signal to China that the US is not about to abandon that region, or its allies there. It came seemingly out of the blue, but had been in the works, apparently initiated by Australia, for some months.”

“A scientific advisory committee to the Food and Drug Administration on Friday overwhelmingly recommended against approving a booster shot of the Pfizer-BioNTech coronavirus vaccine for people 16 and older,” the New York Times reports.

“The committee voted 16 to 3 after holding an intense daylong public discussion on whether booster shots are necessary and if so, for whom. The Biden administration has been hoping the F.D.A. would approve a third shot of the Pfizer vaccine in time to begin rolling out boosters for Pfizer recipients next week.”

After rejecting widespread Covid-19 booster shots, an FDA advisory panel endorsed booster shots only for Americans 65 and over or at high risk for severe disease, the Associated Press reports.

A U.S. drone strike launched on Aug. 29 killed 10 civilians in Afghanistan, including seven children, rather than the Islamic State extremists the Biden administration claimed it targeted, Axios reports.

More than 170 people, including U.S. citizens, made it out of Afghanistan on a chartered flight on its way to Qatar this morning, Reuters reports.

“The Taliban have effectively banned girls from secondary education in Afghanistan, by ordering high schools to re-open only for boys,” The Guardian reports.

“Girls were not mentioned in Friday’s announcement, which means boys will be back at their desks next week after a one-month hiatus, while their sisters will still be stuck at home.”

Wall Street Journal: “While many Afghans watch anxiously to see how harshly the Islamist movement will govern the country, the Taliban’s opponents and supporters alike agree that the most pressing challenge right now is a severe economic crisis that threatens to unspool whatever gains remain of 20 years of U.S.-funded nation-building.”

“How to deal with this crisis poses a pressing dilemma for the international community. Refusing to release Afghan assets and withholding direct aid could push millions into acute poverty, potentially triggering an exodus of refugees to Europe.”

Rosendale also used incendiary language to suggest that settling 75 people in his state amounts to “flooding.”

Rep. Pramila Jayapal (D-WA) says that more than half of the 96-member Congressional Progressive Caucus, which she chairs, has “privately indicated they’re willing to block the bipartisan Senate bill,” Politico reports.

Playbook: “Not everyone believes this threat. We’ve talked to several centrist Democrats this week who scoffed at the notion that progressives would actually tank a Biden win at a time the White House desperately needs one. These types argue that it’s one thing to tell Jayapal you agree with her stance that one bill should not pass without the other, but a totally different situation when Biden and Pelosi are whipping you and you have to take a public vote.”

“FWIW, Democratic leaders seem to be taking this threat seriously.”

Politico reports “21 former House Democrats who lost their seats in 2010 amid GOP attacks over their support for the Affordable Care Act are asking President Joe Biden to use reconciliation to shore up the legislation that ended their careers.”

“The letter comes as the White House, Speaker Nancy Pelosi and Senate Majority Leader Chuck Schumer are working feverishly through the weekend to iron out disagreements over the reconciliation package. As we reported a few days ago, chief among those disagreements is a big decision on health care: whether to make the ACA’s enhanced subsidies permanent (which is what Pelosi wants), or to instead put that limited pot of cash into a Medicare expansion (which is what Biden, Schumer and Bernie Sanders want).”

“No president has ever packed as much of his agenda, domestic and foreign, into a single piece of legislation as President Biden has with the $3.5 trillion spending plan that Democrats are trying to wrangle through Congress over the next six weeks,” the New York Times reports.

“The bill combines major initiatives on the economy, education, social welfare, climate change and foreign policy, funded in large part by an extensive rewrite of the tax code, which aims to bring in trillions from corporations and the rich. That stacking of priorities has raised the stakes for a president resting his ambitions on a bill that could fail over the smallest of intraparty disputes.”

West Virginia Gov. Jim Justice (R) expressed frustration with his state’s vaccination rate, warning constituents that people are either going to get inoculated against COVID-19, or “we’re going to keep lining the body bags,” The Hill reports.

Said Justice: “And they’ll keep dying. That’s all there is to it.”

Outspoken anti vaxxer and former Florida congressional candidate Laura Loomer (R) is feeling the effects of Covid-19, the Miami Herald reports.  Said Loomer, on her Telegram channel: “Just pray for me, please. Can’t even begin to explain how brutal the body aches and nausea that come with Covid are. I am in so much pain.”

“States that ended federal unemployment benefits earlier this summer saw August job growth at less than half the rate of states that retained the benefits, according to new data released Friday by the Bureau of Labor Statistics,” Axios reports.   “Leaders in the largely Republican-led states had insisted that the benefits were discouraging people from work, and ended the assistance program early ahead of its planned expiration on Sept. 6.”

CNN: “A voting app created by allies of prominent Kremlin critic Alexey Navalny was removed from Google and Apple’s online stores in Russia just as polls opened for parliamentary elections, according to a series of tweets from Navalny’s team on Friday.”

Times of London: “Opposition campaigners in Russia accused Google and Apple of caving in to ‘Kremlin blackmail’ yesterday after the US tech giants deleted a technical voting app from their online stores.”

Hey Sean, it is because she does not transparently and obviously lie to the White House Press Corps. You did. Lying to someone angers that person. You angered them, and were treated with all the respect you earned by lying, which is none.

Five Oregonians were recently hospitalized because they consumed a potent antiparasitic drug despite there being no clinical data supporting its use for Covid-19, according to Oregon Health and Science News.

Two were so severely ill that they had to be admitted to an intensive care unit.

Brazilian President Jair Bolsonaro says he will address the United Nations General Assembly in New York next week, despite not having been vaccinated, the BBC reports.  “The New York mayor’s office said all those attending will have to show proof of vaccination to enter the debate hall because it is classified as a convention center.”

Wall Street Journal: “For more than a month, Facebook researchers warned that comments on vaccine-related posts—often factual posts of the sort Facebook sought to promote—were filled with antivaccine rhetoric aimed at undermining their message… The comments ranged from personal objections all the way to debunked falsehoods and conspiracy theories.”

“The wave of negative comments worried global health institutions, including the World Health Organization and Unicef, the documents say… Even authoritative sources of vaccine information were becoming ‘cesspools of anti-vaccine comments.’”

The New Republic tracks Tucker Carlson’s embrace of the dark side.  “A year after his CPAC speech, Carlson would take a stab at creating the type of hard news–focused outlet he described. When he launched The Daily Caller in 2010, he vowed that it would ‘primarily be a news site’ with a straightforward approach to the news: ‘Find out what’s happening and tell you about it. We plan to be accurate, both in the facts we assert and in the conclusions we imply.’ There wasn’t an audience. Within a few months, it was publishing fake news and outrage-driven commentary.”

“The transformation of The Daily Caller is the Rosetta Stone moment of Carlson’s career, a period during which he learned his lesson. He never sought respectability again…”

A U.N. analysis shows that new pledges countries have made, if implemented, would result in a 12 percent decrease in emissions by 2030 — well short of the 45 percent cut needed to keep the world on track to meet the most ambitious aims of the Paris agreement, the Washington Post reports.