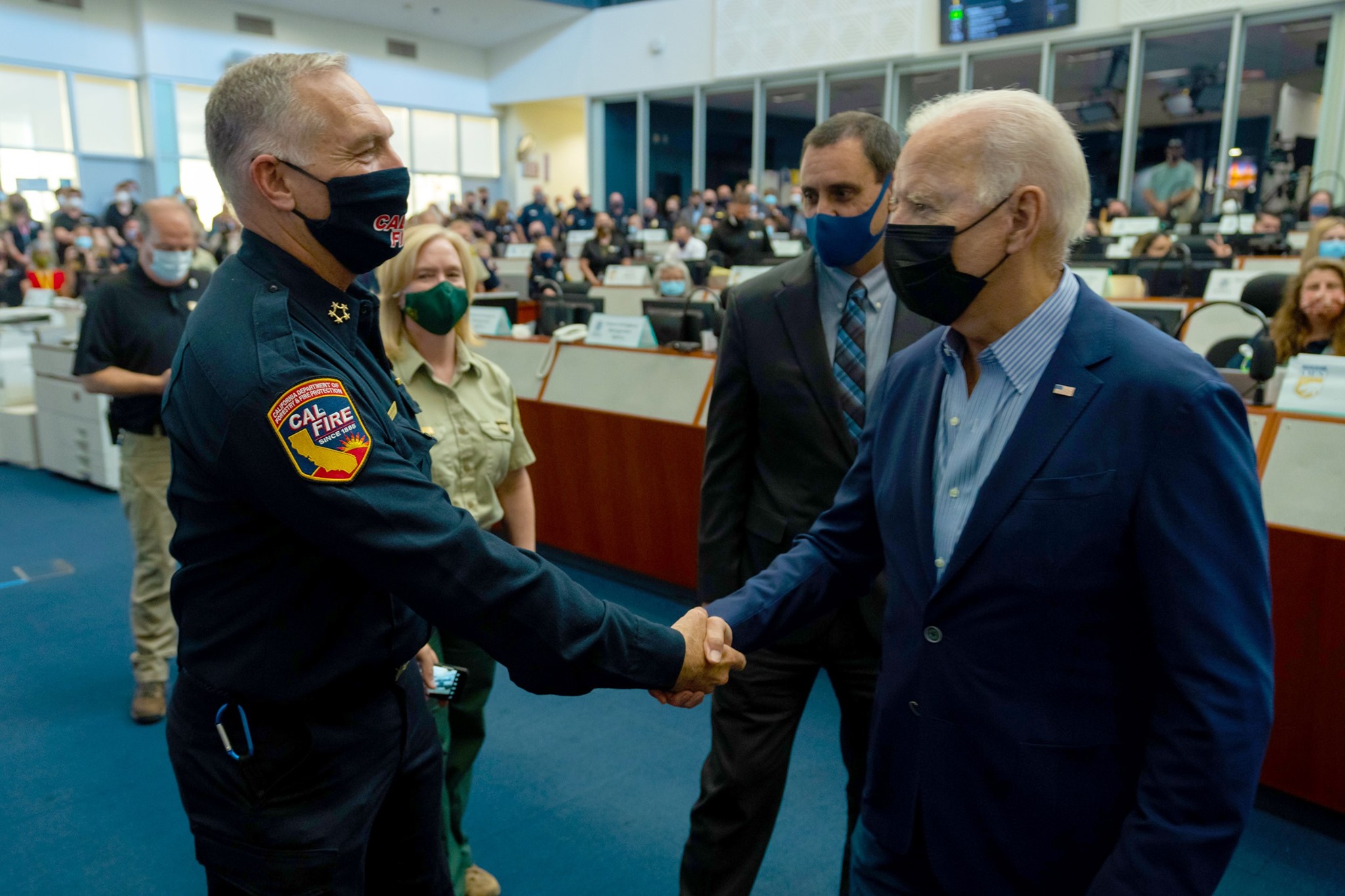 A new Economist/YouGov poll finds that 52% of American adults approve of vaccine mandates announced by President Biden on September 9th, whereas 40% disapprove.

“All 10 swing voters in Axios’ latest focus groups — including those who described themselves as ‘pro-life’ — said they oppose Texas’ new anti-abortion law,” Axios reports.

“If their responses reflect larger patterns in U.S. society, this could hurt Republicans with women and independents in next year’s midterm elections. The swing voters cited overreach, invasion of privacy and concerns about frivolous lawsuits jamming up the courts.”

A new Annenberg survey finds that 49% of Americans said it was accurate to say that arresting those who entered the U.S. Capitol on January 6 to disrupt the certification of the presidential election violated the Constitution because they were exercising their constitutional right to petition the government for redress of grievances.

Rep. Anthony Gonzalez (R-OH), who voted to impeach former President Trump for inciting the Jan. 6 attack on the U.S. Capitol, says he will not seek reelection in 2022, The Hill reports.

Politico: “Donald Trump is endorsing candidates in party primary elections all the way down the ballot, a level of involvement that’s virtually unheard of among recent former presidents.”

“What’s remarkable about Trump’s picks isn’t just their breadth — he’s endorsed close to 40 candidates so far in 23 states — it’s their seemingly random quality. What’s even more unusual is that the political goals of the GOP’s de facto leader aren’t necessarily in sync with his own party — in some cases, they are starkly at odds.”

“If there’s a thread running through nearly all of Trump’s endorsements, it is his habit of rewarding allies and punishing enemies.”

“Swing state by swing state, former President Donald Trump is trying to get people who tried to overturn the 2020 election chosen to be in charge of the 2024 election,” CNN reports.

“Trump’s Monday endorsement of state Rep. Mark Finchem for Arizona secretary of state is the latest in a series of announcements that has alarmed independent elections experts. Trump has now backed Republicans who supported his lies about the 2020 election for the job of top elections official in three crucial battlegrounds — Arizona, Michigan and Georgia — where the current elections chiefs opposed his efforts to reverse his 2020 defeat.”

Trump put out a statement praising Don Bolduc (R), who is running for U.S. Senate in New Hampshire, even though GOP leaders have been pushing for Gov. Chris Sununu (R) to run for Senate.

Trump has bucked the party establishment again and endorsed Matthew DePerno (R) for Michigan attorney general, a lead lawyer in the unsuccessful bid to overturn the state’s 2020 presidential election, the Detroit News reports.

“Many Republicans have privately expressed doubts that DePerno would be a viable general election candidate.”

The Arizona 2020 election “audit” report is expected to be made public on Sept. 24, the Arizona Republic reports.

Former California Gov. Arnold Schwarzenegger (R) said he was relieved that Gov. Gavin Newsom (D) kept his job, although he “declined to say how he voted in the special election,” the Los Angeles Times reports.

Said Schwarzenegger: “It’s better to stay with someone who you know what they’re going to do, rather than someone who comes in wacky and is changing everything around.”

New York Times: “The recall does offer at least one lesson to Democrats in Washington ahead of next year’s midterm elections: The party’s pre-existing blue- and purple-state strategy of portraying Republicans as Trump-loving extremists can still prove effective with the former president out of office, at least when the strategy is executed with unrelenting discipline, an avalanche of money and an opponent who plays to type.”

Pew Research: “Contrary to what some may have expected, a new analysis of Pew Research Center survey data finds that there has been no large-scale departure from evangelicalism among White Americans. In fact, there is solid evidence that White Americans who viewed Trump favorably and did not identify as evangelicals in 2016 were much more likely than White Trump skeptics to begin identifying as born-again or evangelical Protestants by 2020.”

Christopher Ingraham: “A new YouGov survey conducted on behalf of a democracy watchdog group finds that 66% of Republicans living in the South say they’d support seceding from the United States to join a union with other Southern states.”

“Secession is actually gaining support among Southern Republicans: back in January and February, 50% said they’d support such a proposal.”

Meanwhile, conservative Ben Shapiro floated the idea of a “friendly separation” of certain states away from the union.

Jonathan Last: “When the Democrats took the House in 2018, they did so by winning a bunch of marginal R districts, which meant that their caucus became more moderate. When the Republicans take the House in 14 months, they’re going to do it with a caucus that is substantially more Trumpy, because they will have purified the party through a series of challenges and retirements.”

“Just looking at the map, I would expect a Republican House majority in 2023 to be more extreme—and more loyal to Trump—than their minority is right now.”

“On Saturday, that’s a setup. If people don’t show up they’ll say, ‘Oh, it’s a lack of spirit.’ And if people do show up they’ll be harassed.” — Former President Donald Trump, talking to The Federalist about the rally at the Capitol this weekend.

“It was unclear who was responsible for the breach, which exploited Microsoft software, or what the hackers did with any data they may have accessed.”

“Rep. Elise Stefanik (R-NY), the No. 3 House Republican, is pushing the notion in Facebooks ads that President Biden and fellow Democrats are seeking a ‘permanent election insurrection’ by expanding pathways to citizenship for undocumented immigrants,” the Washington Post reports.

“The ad depicts Biden with people who appear to be migrants reflected in the sunglasses he is wearing.”

“The language in the ads echoes that of far-right commentators, including Fox News’s Tucker Carlson, who have advanced a ‘replacement theory’ that says liberals are seeking to replace White citizens with non-White immigrants who are inclined to support the Democratic Party.”

The campaign biography of Trump-endored Michigan Secretary of State candidate Kristina Karamo (R) says she “serves as a professor” and “teaches” at a community college, but a college spokesperson told CNN that she hasn’t worked there since 2018.

Ruy Teixeira: “The Democrats’ electoral fate remains bound up with, above all, success in containing the coronavirus and, closely related to that, restoring a sense of normality to the country, with attendant boom conditions in the US economy. Controversy around vaccine mandates was used to the Democrats’ advantage in the California recall but ultimately what will really matter is whether the mandates and associated measures actually work to solve the big and obvious problems Americans face.”

“The Democrats will be judged by real world success, which is still far from certain.”

“At one time, this sort of change from the presidential to the midterm electorate might have made midterm electorates worse for Democrats. But given changes in the electorate, this midterm turnout pattern may actually aid Democrats, or at least not hurt them as much as it once did.”

“The outcome in key swing states whiter than the national average, such as Pennsylvania, Wisconsin, and New Hampshire, may be influenced heavily by educational turnout differential. In states with large nonwhite cores, such as North Carolina, Georgia, Arizona, and Nevada, minority turnout will play a more critical role.”

FiveThirtyEight: “In years when the president’s party leads the generic-ballot polling average the September before the midterms, the party underperforms those polls by an average of 9.3 points. And that, in a nutshell, is why Democrats should be concerned about the 2022 elections despite their current lead on the generic ballot.”

“This cycle so far looks a lot like former President Barack Obama’s two midterms (2010 and 2014) did for Democrats in that they lead generic-ballot polls by a few points in the September of the year before the election. But in both those years, Republicans eventually moved ahead in our generic-ballot polling average and won the election handily.”