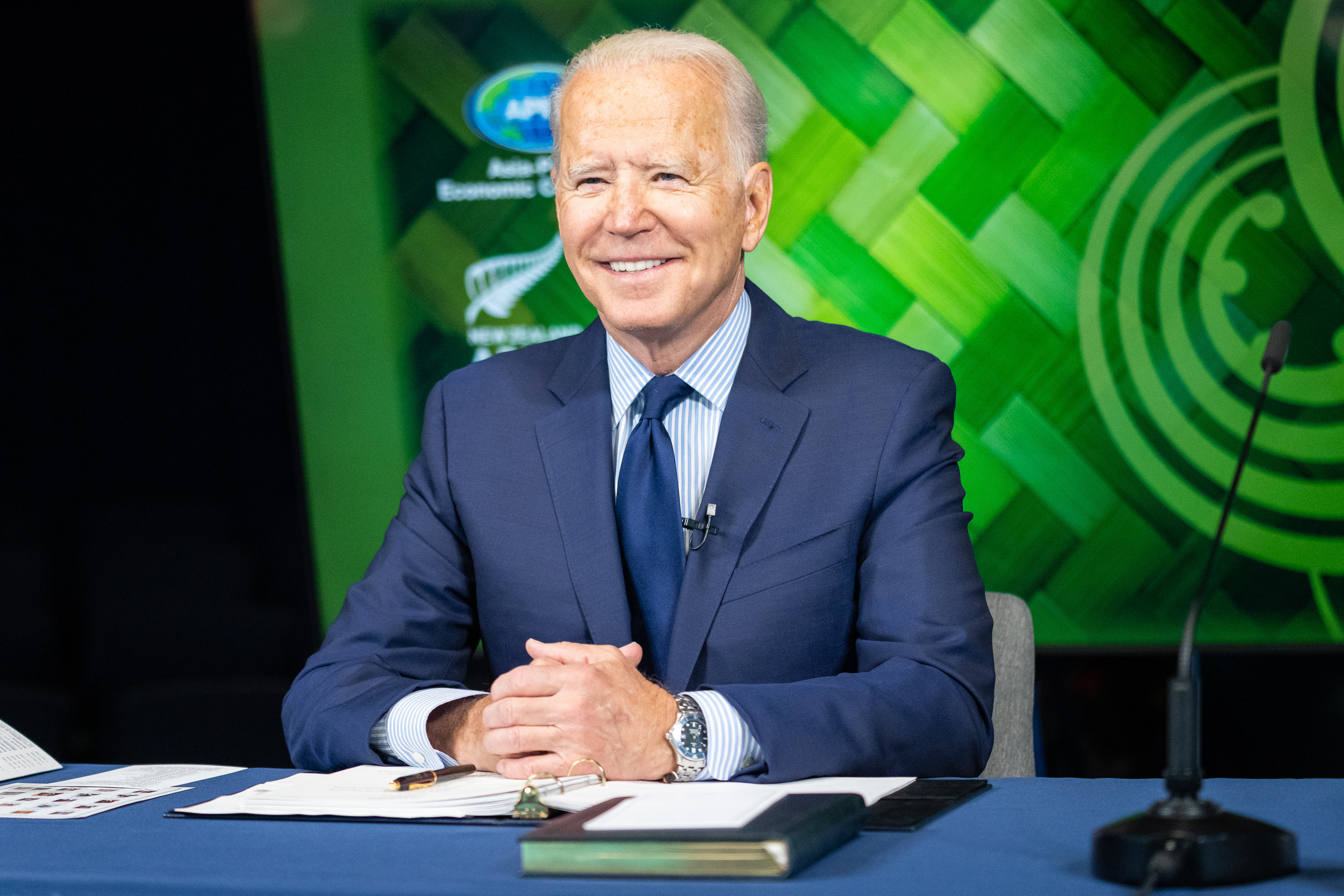 “The U.S. economy is emerging from the pandemic with more well-paying jobs for those who want them, less hunger, less poverty, higher wages, less inequality, and more wealth for everyday Americans,” Axios reports.

“None of these outcomes were expected when the pandemic began. All of them are the result of massive government programs.”

“Six months after signing a massive economic stimulus package into law, President Biden on Thursday embarked on a fresh push for trillions of dollars in additional spending, attempting to pivot from an emergency posture to advancing a long-term liberal vision of government,” the Washington Post reports.

“Defying a president from his own party — face-to-face — is the strongest indication yet Manchin is serious about cutting specific programs and limiting the price tag of any potential bill to $1.5 trillion. His insistence could blow up the deal for progressives and others.”

Democrats at this time do not have the votes for a $3.5 trillion budget reconciliation bill. They probably need to cut it by half or more just to get it through the Senate. So the question is: Will House progressives follow though on threats to kill the bill — along with the $1.2 trillion bipartisan infrastructure package — or will they suck it up and declare victory on what will likely be more than $3 trillion in new spending between the two bills?

Josh Marshall: “Especially since the withdrawal from Afghanistan the insider sheets have been relentlessly hostile to President Biden. Last night the Axios evening headline was “Biden’s China Fail”. Tonight it’s “Scoop: Biden Bombs”. Apparently Biden didn’t convince Joe Manchin to drop his opposition to a $3.5 trillion reconciliation package in their well-publicized-in-advance sit-down at the White House.

Axios’s gloss aside, this does not surprise me. At the most optimistic this is Manchin’s bargaining position going into a critical 6 weeks or so of negotiating within the Democratic caucuses in the House and Senate. Manchin’s just going to give way in advance because Biden asks him to? That makes no sense to me at all.”

Former President Donald Trump offered his public support to those accused of joining the January 6 riot at the Capitol, claiming that suspects are “being persecuted so unfairly.”

He added: “In addition to everything else, it has proven conclusively that we are a two-tiered system of justice.”

Washington Post: “The U.S. Capitol Police chief formally asked for 100 armed National Guard members to be on standby for a rally this Saturday at the Capitol in case it turns violent, but withdrew the request at the urging of a top Senate security official who said he had not followed protocol.

Days later, Chief J. Thomas Manger instead asked for unarmed Guard members after conferring with the official, Senate Sergeant at Arms Karen Gibson, and the Pentagon, according to internal correspondence and three people familiar with the discussions. The Guard members would be armed only with batons and would be accompanied by armed police.

On Friday morning, the Department of Defense approved the request for support, saying unarmed soldiers will be stationed at the D.C. Armory and deploy only if necessary. It’s highly unusual for armed National Guard members to respond to protests, and strict rules must be followed in such cases.”

“Idaho hospitals are so overwhelmed with the surge in coronavirus cases that doctors and nurses have to contact dozens of regional hospitals across the West in hopes of finding places to transfer individual critical patients,” NBC News reports.

“The situation has grown so bad that the Idaho Department of Health and Wellness announced Thursday that the entire state is in a hospital resource crisis, permitting medical facilities to ration health care and triage patients.”

“Thousands of Haitian migrants who have crossed the Rio Grande in recent days are sleeping outdoors under a border bridge in South Texas, creating a humanitarian emergency and a logistical challenge U.S. agents describe as unprecedented,” the Washington Post reports.

“Authorities in Del Rio say more than 10,000 migrants have arrived at the impromptu camp, and they are expecting more in the coming days. The sudden influx has presented the Biden administration with a new border emergency at a time when illegal crossings have reached a 20-year high and Department of Homeland Security officials are straining to accommodate and resettle more than 60,000 Afghan evacuees.”

“When border arrests rose sharply this spring, the president said the increase was consistent with normal seasonal patterns. But crossings have continued to soar regardless of the extreme weather, and U.S. border authorities have struggled to cope with the health, humanitarian and security challenges of the historic influx, particularly as families and children account for a growing share of crossings.”

“This is Germany’s first general election without Angela Merkel running for chancellor since 2002. For her conservative bloc, it is shaping up as a debacle,” the Wall Street Journal reports.

“A gaffe-prone new candidate, the popular chancellor’s almost complete absence from the campaign, and voter fatigue after 16 years of conservative rule could converge to deliver the bloc’s worst national electoral result ever, according to pollsters and analysts.”

“Less than two weeks before election day, opinion polls show Ms. Merkel’s group, an alliance of conservative parties known collectively as the Union, with 20% of the vote, down 15 points since January and some five points behind its center-left Social Democratic rival.”

Boris Johnson will “go long” and wait until 2024 before holding an election amid concerns that moving earlier will repeat the mistake of Theresa May, the Times of London reports.

“Supreme Court Justice Clarence Thomas on Thursday criticized some in the judiciary for veering into the role of legislators and politicians, saying it’s not for judges to make policy or to base decisions on their personal feelings or religious beliefs,” CBS News reports.

Said Thomas: “The court was thought to be the least dangerous branch, and we may have become the most dangerous. And I think that’s problematic.”

“The White House is warning states that a default caused by failing to raise the federal debt limit could result in drastic cutbacks to disaster relief, Medicaid, school funding and other programs,” CNN reports.

“The memo comes as Democratic leaders are seriously considering adding a debt limit increase to the stopgap funding bill. A final decision on whether to make that move must come by Monday, when the House Rules Committee is slated to take up the short-term continuing resolution, or CR, to keep the government open past September 30.”

“If Democrats add the debt limit hike to the CR, it will set up a showdown vote days before the shutdown deadline, since Senate Republicans are vowing to block it.”

Gen. Mark Milley said that calls he made to his Chinese counterpart in the final stormy months of Donald Trump’s presidency were “perfectly within the duties and responsibilities” of his job, the AP reports.

“Milley has been at the center of a firestorm amid reports he made two calls to Gen. Li Zuocheng of the People’s Liberation Army to assure him that the United States was not going to suddenly go to war with or attack China.”

“The House Oversight Committee has widened its inquiry into the oil and gas industry’s role in spreading disinformation about the role of fossil fuels in causing global warming, calling on top executives from Exxon Mobil, Chevron, BP and Royal Dutch Shell, as well as the lobby groups American Petroleum Institute and the United States Chamber of Commerce, to testify before Congress next month,” the New York Times reports.

Then-House Speaker Paul Ryan started studying how to interact with people with narcissistic personality disorder after Donald Trump won the 2016 election, according to a new book by Bob Woodward and Robert Costa, Insider reports.

“Ryan was caught off guard when Trump won the election in an enormous upset over Democratic nominee Hillary Clinton. Republicans controlled the House and Senate, and Ryan, realizing that he would have to work with Trump, started researching how to deal with someone who is ‘amoral and transactional.’”

In the final days of his presidency, Donald Trump signed a highly unusual order that gifted six extra months of Secret Service protection to his four adult children and their families at a cost to taxpayers of $1.7 million, the Washington Post reports.

“Broken up into 72 short chapters, it hurtles through the past two years of dizzying news. But while it covers the 2020 campaign season and the course of the pandemic and the protests after George Floyd’s murder and the opening months of Joseph Biden’s presidency, the book’s centerpiece is the riot at the Capitol on Jan. 6, and its primary concern is how President Trump behaved in the lead-up to and the aftermath of that crisis.”

“Books in this genre like to make news, and this one doesn’t waste any time.”

“As Donald Trump returns to Georgia later this month, criminal investigators in the state have been quietly conducting interviews, collecting documents and working to build a line of communication with congressional investigators as they aim to build a case against the former President for his alleged attempts to overturn the state’s 2020 election results,” CNN reports.

Politico: “The National Archives and Records Administration has sent hundreds of pages of documents requested by the Jan. 6 select committee to the former president’s legal team to review.”

“That move kicks off a process that will result in some tough decisions for Biden’s White House counsel, both politically and legally. That’s because the office will have to decide whether to sign off on any efforts from Team Trump to keep sensitive White House communications from becoming public.”