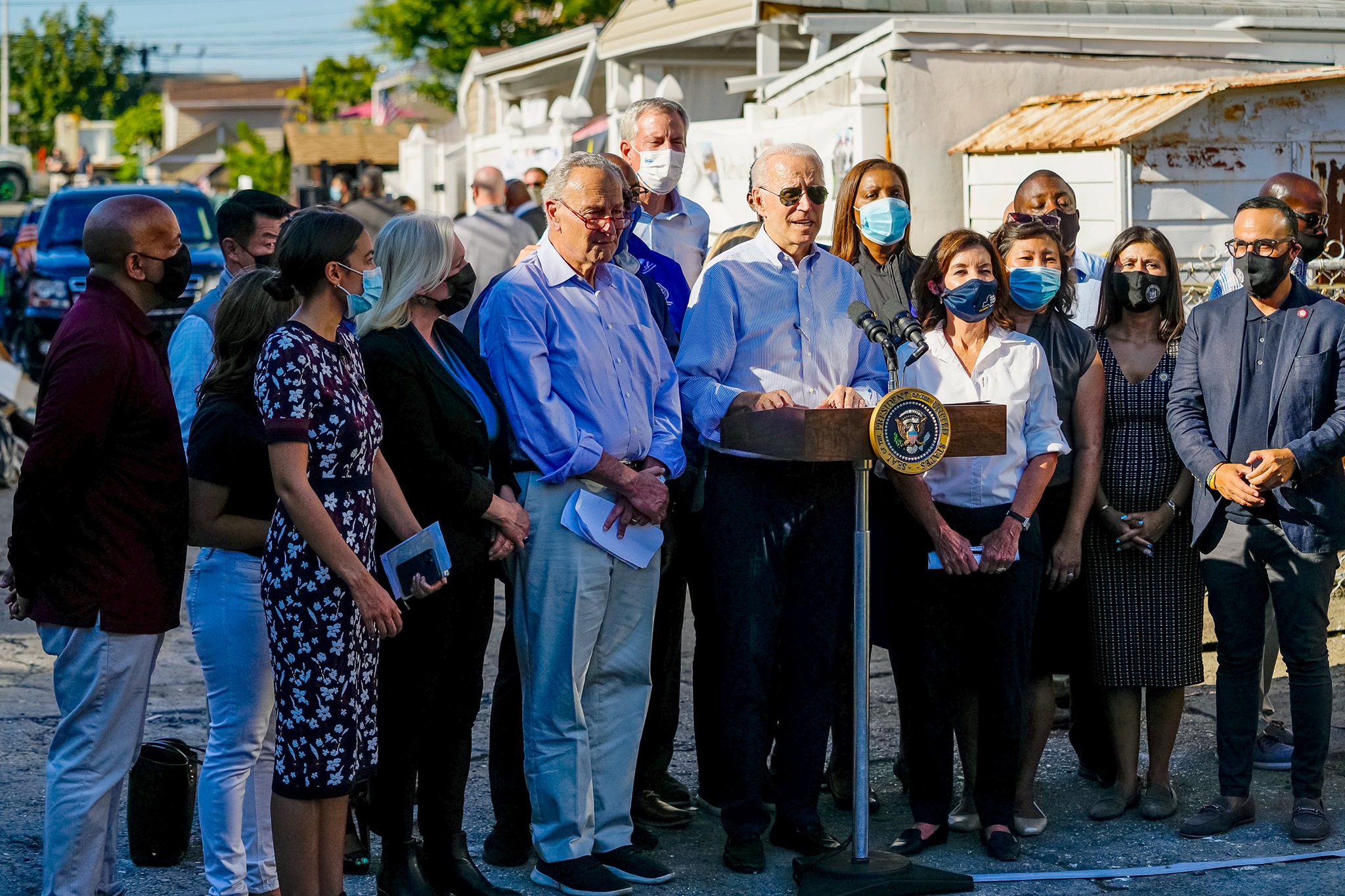 A new Quinnipiac poll finds an overwhelmingly majority of Americans say by 68% to 24% that the recent rise in Covid-19 deaths in the U.S. was preventable.

However, a slight majority of Americans — 51% to 48% — disapprove of President Biden’s plan to mandate vaccines for millions of Americans in the public and private sectors.

A new Monnouth poll finds support for instituting, or reinstituting, state-based face mask and social distancing guidelines has increased in the past few months.

Currently, 63% support these measures in their state, which is up from 52% in July.

The poll also finds that 66% of Americans support requiring that face masks be worn by students, teachers, and staff in schools.

A new CNN poll finds 56% of Americans feel democracy is under attack in this country and 51% say it is likely that elected officials will successfully overturn the results of a future election because their party did not win.

Former President Donald Trump claimed without evidence that the California recall against Gov. Gavin Newsom (D) is likely “rigged”, suggesting that the widespread use of mail ballots will ensure a victory for the Democrat, the Sacramento Bee reports.

Said Trump: “It’s probably rigged. The ballots… are mail-in ballots… I guess you even have a case where you can make your own ballot. When that happens, nobody’s gonna win except these Democrats. The one thing they are good at is rigging elections, so I predict it’s a rigged election.”

Jonathan Bernstein: “While the California recall tells us nothing helpful about voter mood, it does say something small and something large about the Republican Party that may affect upcoming elections.”

“The minor point is that Republicans are still following their 2020 strategy of giving their own voters a one-two demobilization punch. They’re still demonizing absentee and other mail-in or drop-box voting, thereby discouraging their own voters from using those methods and making it harder for their own supporters to vote. Some of the recent Republican state laws making voting harder are in part simply a convoluted way of making up for the campaign that’s pushed Republican voters away from voting methods they were in the habit of using.”

“The bigger idea is that Republican claims of election fraud are not only fictional and dangerous for democracy, but also may be sending a message to Republican voters that voting is futile.”

BOSTON MAYOR — “A historically diverse mayoral field has been whittled down to a pair of candidates who will advance to the final round on Nov. 2: City Councilors Michelle Wu and Annissa Essaibi George, unofficial vote tallies from 100 percent of city precincts show,” the Boston Globe reports.

“The two women of color, who have struck dramatically different tones on the campaign trail so far, both claimed enough votes to get over the first hurdle Tuesday night. They’re now on track for the general election after puzzling delays by the city in posting results.”

CLEVELAND MAYOR — Former Rep. Dennis Kucinich‘s (D-OH) latest campaign for Cleveland mayor came to an end Tuesday night, when he failed to earn one of the top two spots in the primary, WJW reports.

ATLANTA MAYOR — The University of Georgia is out with its first poll of this November’s nonpartisan primary for the Atlanta Journal-Constitution, and it finds former Mayor Kasim Reed and City Council President Felicia Moore well ahead in the race for the two spots in the all-but-assured runoff. Reed, who was termed-out in 2018, leads Moore 24-20, while none of the other candidates take more than 6% of the vote each.

We’ve seen three other surveys of this contest, but while they’ve all found Reed and Moore positioned to advance, there is some disagreement on how other contenders are doing. In late July, a SurveyUSA poll for 11Alive News had Reed out in front with 17%, with Moore edging out little-known candidate Walter Reeves 10-6 for second. However, a mid-August poll for 20/20 Insight, which the AJC said was “conducted independently of any campaign,” had Moore in the lead with 21% while Reed tied City Councilman Andre Dickens 15-15 for the second runoff spot.

Late in the month, a Moore internal from Brilliant Corners also found her in first with 24% while Reed outpaced Dickens by a wide 19-6.

“The once-obscure state-level job of overseeing elections has emerged as a prime target for wealthy donors and national organizers from both parties seeking an edge in the 2022 midterms that could shift control of Congress away from Democrats,” Bloomberg reports.

“Republicans are backing secretary of state contenders who echo Donald Trump’s false claims that the 2020 election was stolen from him through voter fraud… Democrats have also seen an exponential increase in the amount of money they’re raising for the role, which is often sought as a stepping stone to higher statewide office.”

Charlie Sykes: “The great political mystery of our time has been the refusal of the GOP to take the many off-ramps from Trumpism.”

“They could have put the petulant, disgraced, defeated one-term president firmly in the rearview mirror — but, instead, they have embraced their hostage status with an obsequiousness that makes the Stockholm Syndrome seem quaint.”

“Republicans could have moved on after the election; they certainly could have bailed after January 6. They even had a chance to wipe the slime off during the impeachment process. They could have refused to go along with the Big Lie and easily segued into post-Trumpian oppositional politics.”

“Instead, they are poised to wear Trumpism like a coat of many colors into the mid-terms; and to nominate him for a second term in 2024, so that he can wage his paranoid revenge campaign against his enemies.”

“Pennsylvania Republicans moved on Wednesday to seek personal information on every voter in the state as part of a brewing partisan review of the 2020 election results, rubber-stamping more than a dozen subpoenas for driver’s license numbers and partial Social Security numbers,” the New York Times reports.

“The move adds Pennsylvania to a growing list of states that have embarked on partisan-led reviews of the 2020 election, including a widely criticized attempt to undermine the outcome in Arizona’s largest county.”

“Wisconsin election clerks are reacting with a mixture of concern and confusion to the first inquiry made by a special investigator hired by Republicans to examine how the 2020 presidential election was run in the battleground state,” the Milwaukee Journal Sentinel reports.

“The email from the lead investigator landed in the junk folders of at least seven counties and wasn’t received by at least 11 others. Several that did get it flagged it as a security risk.”

“The Mercers’ donation, delivered through their family foundation, went to the Donors Trust, according to a new 990 disclosure form. The hefty contribution reveals that the Mercers played a much bigger role in financing groups during the 2020 election than previously known.”

WYOMING AT LARGE CD — State Rep. ​​Chuck Gray on Tuesday became the third Republican to end his primary campaign against incumbent Liz Cheney in the days following Donald Trump’s decision to endorse a different contender, 2018 gubernatorial candidate Harriet Hageman. (You could even say he chucked his campaign.)

COLORADO GOVERNOR — University of Colorado Regent Heidi Ganahl, who is the one Republican left in statewide office, announced Tuesday that she would challenge Democratic Gov. Jared Polis.

Ganahl begins as the heavy frontrunner in a primary that includes businessman Greg Lopez, who took a distant third in the 2018 nomination contest, but even she acknowledged in June that beating Polis in the general would be a “moonshot.” She has good reason to anticipate the need for an Extravehicular Mobility Unit: This one-time swing state backed Joe Biden 55-42, and a June survey from the Democratic firm Global Strategy Group had Polis beating Ganahl 54-34.

New Hampshire state Rep. William Marsh said he had formally left the Republican Party in protest of what he said was an emerging strain of anti-vaccination rhetoric coming from state House leaders, The Hill reports.

Said Marsh: “I have come to realize a majority of Republicans, both locally and in the New Hampshire House, hold values which no longer reflect traditional Republican values.”