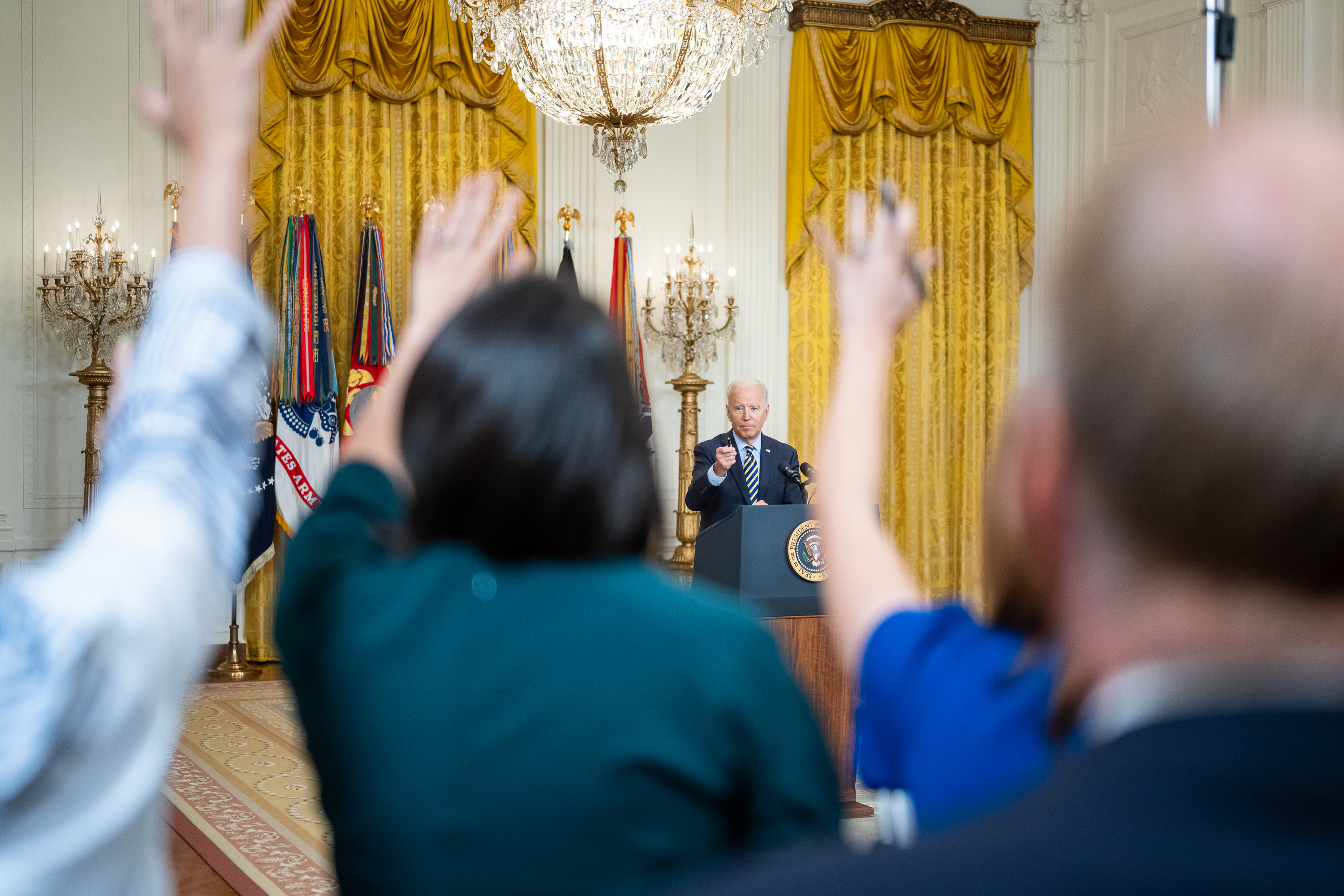 Both senators have both indicated they will not support a bill with a price tag that high.

Associated Press: “The legislation represents the heart of the president’s domestic agenda, and the stakes are high for Biden and his party for finding a pathway to push the measure through the closely divided Congress.”

“Democrats’ signature legislation to lower drug prices was defeated in a House committee on Wednesday as three moderate Democrats voted against their party,” The Hill reports.

“The vote is a striking setback for Democrats’ $3.5 trillion package. Drug pricing is intended to be a key way to pay for the package. Leadership can still add a version of the provision back later in the process, but the move shows the depth of some moderate concerns.”

“Joe Biden entered the White House with a pledge to hit the wealthiest Americans with higher taxes in order to fund trillions of dollars of social spending while tilting the benefits of US fiscal policy away from Wall Street,” the Financial Times reports.

“But as negotiations in Congress on Biden’s tax proposals enter the final stretch, influential Democrats from the president’s own party are trying to water them down, heralding a potential reprieve for America’s financial sector and some of the richest households.”

The White House said that President Biden has “complete confidence” in Gen. Mark Milley, the chairman of the Joint Chiefs of Staff, following a report in a new book that the country’s top military officer privately conferred with his Chinese military counterpart to avert armed conflict with the United States late in the Trump administration, the Washington Post reports.

“When Joint Chiefs Chairman Mark Milley goes before Congress on Sept. 28, he may face some of the most hostile questioning of any modern four-star general,” Axios reports.

“Newly released excerpts from Peril by Bob Woodward and Robert Costa — detailing secret moves by the nation’s highest-ranking military officers to manage national security risks that he perceived Donald Trump posed in the final days of his presidency — are driving questions about whether Milley went too far.”

“In the afternoon hours on Tuesday, following reports that then-President Donald Trump’s top military adviser had formulated secret plans in case the commander in chief went ‘rogue’ after the Jan. 6 riot, the ex-president picked up the phone and rang up several close associates and TV-prone political allies,” the Daily Beast reports.

“According to two people familiar with the matter, the twice-impeached former president was sounding testy and had a simple request: He wanted his prominent supporters to go on television and in public this week to declare that Gen. Mark Milley should be ‘arrested’ for ‘treason.’”

Trump said the book was “concocted by a weak and ineffective General together with two authors who I refused to give an interview to because they write fiction, not fact.”

The U.S. death toll from Covid-19 has now exceeded 663,000, which means the coronavirus has led to the deaths of roughly 1 in every 500 Americans, the Washington Post reports.

“Republican legislators in more than half of U.S. states, spurred on by voters angry about lockdowns and mask mandates, are taking away the powers that state and local officials use to protect the public against infectious diseases,” the AP reports.

“While some governors vetoed bills that passed, at least 26 states pushed through laws that permanently weaken government authority to protect public health.”

Israel Health Ministry Director-General Nachman Ash said that “the current wave of coronavirus infections is surpassing anything seen in previous outbreaks and that he is disappointed that a recent downward trend appeared to be reversing,” the Times of Israel reports.

Bloomberg: “China locked down a city of 4.5 million people in the southeastern province of Fujian after detecting a dozen coronavirus cases, an attempt to once again halt a delta outbreak and maintain its strict zero-tolerance approach to Covid-19.”

Former President Donald Trump told Newsmax that Barack Obama “is probably running the government now anyway, according to many.”

Trump also complained that “our country has gone really downhill in the last eight months like nobody’s ever seen before.”

Grisham says she tried to convince Melania to calm down protesters and that the election was not “stolen” but text messages show her helping to fan the flames of the “election fraud” claims.

CNN has a one sentence review of Peril by Bob Woodward and Robert Costa: “Filled with scenes of backbiting, temper tantrums, and expletive-filled phone calls, the book depicts a GOP in chaos, desperately trying to preserve its relationship with Trump.”

“This guy called me every single day, pretended to be my best friend, and then, he fucked me. He’s not a good guy.” — Donald Trump, quoted in Peril, about House Minority Leader Kevin McCarthy (R-CA) (via CNN.)

New York Times: “Army officials said Tuesday that all active-duty units are expected to be fully vaccinated by Dec. 15, and Reserve and National Guard members by June 30. Those who refuse to be vaccinated and have not been given an exemption will face suspension.”

“The possible consequences vary somewhat by role. Army commanders, command sergeants major, first sergeants and officers on track for future command assignments who refuse to be vaccinated and are not given an exemption face suspension and relief from duty. Soldiers of all ranks who are not in command positions can receive a general order of reprimand, which may be removed from their file when they are next transferred or may be placed into their permanent file, affecting future assignments and promotions.”

“A major row broke out between leaders of the Taliban just days after they set up a new government in Afghanistan,” senior Taliban officials told the BBC.

“Supporters of two rival factions reportedly brawled at the presidential palace in the capital Kabul.”

“The argument appeared to centre on who did the most to secure victory over the US, and how power was divided up in the new cabinet.”

The Economist says the “violent disagreement” led to the disappearance of Abdul Ghani Baradar, the acting deputy prime minister.

“U.S. intelligence agencies are seeing early signs that al Qaeda militants have begun to return to Afghanistan, after they dispersed from the country in response to the U.S. counterterrorism effort there,” the Wall Street Journal reports.

Politico: “Senate conservatives will filibuster any attempt to raise the debt ceiling that they can, closing off one of Democrats’ pathways to avoiding a U.S. default later this fall.”

“While the GOP has vowed it won’t give Democrats the affirmative votes they need to raise the borrowing limit, the party could theoretically decline to filibuster a debt bill, allowing Democrats to increase the nation’s credit cap with a simple majority vote in the Senate. But Sen. Ted Cruz (R-TX) said in an interview that he won’t allow that to happen, echoing his party’s growing insistence that default be avoided along party lines using the budget reconciliation process — a tactic Democratic leaders have thus far eschewed.”

“As far as we can tell, the Democrats’ strategy when it comes to lifting the debt limit is this — Senate Minority Leader Mitch McConnell and his GOP colleagues will fold and help President Joe Biden and Senate Majority Leader Chuck Schumer extend the government’s borrowing authority,” Punchbowl News reports.

“On its face, it seems to us like a really risky bet. Why? Because typically when McConnell takes a public position, he stands firm and ignores all public pressure to flip — and he brings his conference along with him. See Brett Kavanaugh, Amy Coney Barrett and Neil Gorsuch.”

Wall Street Journal: “Internal documents show Facebook knows that Instagram is harmful to many young users—most notably teenage girls. The company in public has consistently played down the app’s negative effects on teens.”

When Facebook made an algorithm change in 2018 the company said it “would encourage people to interact more with friends and family,” but staffers warned in internal documents “the change was having the opposite effect… It was making Facebook’s platform an angrier place,” the Wall Street Journal reports.

“Company researchers discovered that publishers and political parties were reorienting their posts toward outrage and sensationalism. That tactic produced high levels of comments and reactions that translated into success on Facebook.”

The research concluded: “Misinformation, toxicity, and violent content are inordinately prevalent among reshares.”

“Mark Zuckerberg has publicly said Facebook allows its more than nearly three billion users to speak on equal footing with the elites of politics, culture and journalism, and that its standards of behavior apply to everyone, no matter their status or fame,” the Wall Street Journal reports.

“In private, the company has built a system that has exempted high-profile users from some or all of its rules, according to company documents reviewed by The Wall Street Journal. At times, the documents show, the system has protected public figures whose posts contain harassment or incitement to violence, violations that would typically lead to sanctions for regular users.”

“Pope Francis said that Catholic bishops must minister to politicians who back abortion with ‘compassion and tenderness,’ not condemnation, and warned that they shouldn’t let politics enter into questions about receiving Communion,” the AP reports.

“Francis recalled cases when the church had held fast to a principle on political grounds and it ended badly, citing the Inquisition-era condemnation of Giordano Bruno for alleged heresy. He was burned at the stake in Rome’s Campo dei Fiori.”

North and South Korea have tested ballistic missiles hours apart from each other, highlighting an arms race on the peninsula as nuclear talks with the North remain stalled, the BBC reports.

“North Korea says it successfully test fired newly developed long-range cruise missiles over the weekend, its first known testing activity in months, underscoring how it continues to expand its military capabilities amid a stalemate in nuclear negotiations with the United States,” the AP reports.

“Haiti’s chief prosecutor on Tuesday ordered the acting prime minister not to leave the country until he answers questions about the July assassination of President Jovenel Moïse,” the New York Times reports.

“British Prime Minister Boris Johnson demoted his top diplomat and fired his education minister in a major government shakeup Wednesday, as he tried to move on from a series of political missteps and revive his promise to ‘level up’ prosperity across the U.K.,” the AP reports.

“In the biggest move, Johnson demoted Foreign Secretary Dominic Raab, who has faced criticism for delaying his return from a holiday in Greece as the Taliban took over Afghanistan last month.”

“Raab was appointed justice secretary with the added title of deputy prime minister. Despite the grand title, that is a demotion — the deputy has no formal constitutional role.”

The BBC has more on the changes.

Russian President Vladimir Putin will isolate himself for an undisclosed amount of time after people in his inner circle tested positive for the coronavirus, Axios reports.

Norway’s center-left opposition is on course to regain power after an unprecedented eight years of rightwing rule in an election dominated by climate change and the future of the country’s oil industry, Deutsche Welle reports.

John Ellis notes the result brings to power Labour leader Jonas Gahr Store and means for the first time in 62 years all five Nordic countries have a leftwing prime minister at the same time.