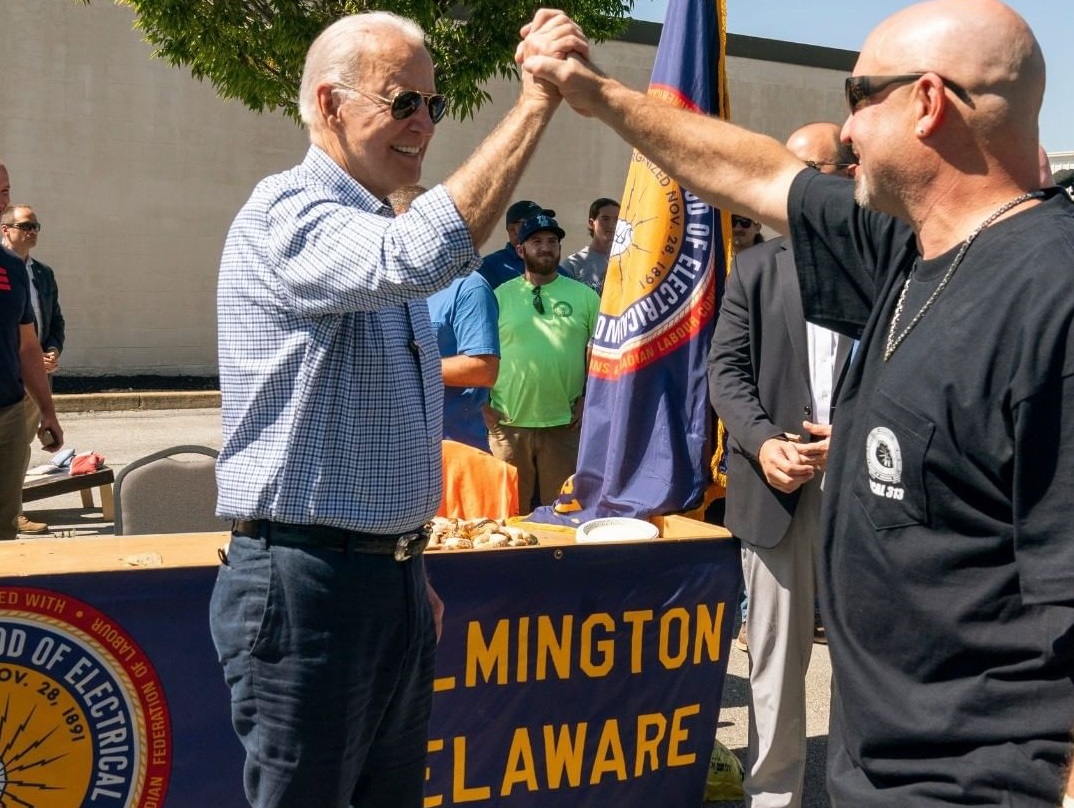 A new CNN poll finds Republicans and Republican-leaning independents say, 63% to 37%, that Donald Trump should be the leader of the Republican Party.

“But they are about evenly split over whether having the defeated former President back on the ticket in 2024 would be an advantage: 51% say that Republicans have a better chance of retaking the presidency if Trump is the nominee, with 49% saying the party would be better off with a different nominee.”

Key finding: “Trump’s support isn’t equally distributed throughout the party: 69% of Republicans without a college degree think Trump should head the party, compared with 49% of those who hold a college degree.”

Eric Lutz, writing for Vanity Fair:  “One of the frightening things about all this is how easily these lies go down, how little effort is required of the people selling these fictions to get the base to buy them. A CNN poll released Sunday found that 59% of Republicans say believing Trump won the 2020 election is at least a somewhat important part of being a Republican. It’s not just that Trump has never provided evidence in court to support his fraud claims; it’s that he’s never defined what the fraud is supposed to be.”

“But this is what makes the conspiracy theories so durable: By never fully nailing down what, precisely, he’s accusing his opponents of doing, their efforts to disprove his allegations can never quite extinguish them. Those lies may not have helped Trump against Biden in 2020—despite the efforts of 139 House Republicans, who, notably didn’t challenge their own victories last November—and they may not help Elder and his fellow GOP hopefuls against Newsom now in 2021. But the more Republicans invest in these insidious lies now, perhaps, the more likely is that they will pay off for them down the road.”

California’s recall is ending like it started: with Gov. Gavin Newsom the heavy polling favorite to keep his job. Two final surveys find Tuesday’s recall failing by wide—and growing—margins: UC Berkeley has the effort going down to defeat by a 60-38 spread, while SurveyUSA has the “no” side prevailing 54-41.

Berkeley’s last poll, taken in mid-July, found Newsom hanging on just 50-47 among likely voters, a result that helped set off a wave of panic among Democrats, since it was the first to show such a close race. That was followed a couple of weeks later by a SurveyUSA poll that actually saw the recall succeeding by a 51-40 margin, making it the first independent survey to do so—and amping up Democrats’ anxiety.

Whatever the case may be, FiveThirtyEight’s aggregate of the available polling has Newsom winning by a comfortable 56-41 average. As Inside Elections’ Ryan Matsumoto notes, if the numbers are off, it would be a “gigantic polling miss” the likes of which we’ve seldom seen.

Perhaps the most notable tell that the public polls match whatever private numbers the GOP is seeing is the fact that the Republican Governors Association had spent less than $400,000 as of the end of August on the campaign to oust Newsom—a microscopic fraction of the $125 million spent on the race overall. If Newsom doesn’t win handily, it’ll be as much as shock to Republicans as to Democrats.

New York Times: “As a wave of recent polling indicated that Mr. Newsom was likely to brush off his Republican challengers, the baseless allegations accelerated. Larry Elder, a leading Republican candidate, said he was ‘concerned’ about election fraud. The Fox News commentators Tomi Lahren and Tucker Carlson suggested that wrongdoing was the only way Mr. Newsom could win. And former President Donald J. Trump predicted that it would be ‘a rigged election.’”

“This swift embrace of false allegations of cheating in the California recall reflects a growing instinct on the right to argue that any lost election, or any ongoing race that might result in defeat, must be marred by fraud. The relentless falsehoods spread by Mr. Trump and his allies about the 2020 election have only fueled such fears.”

Former President Donald Trump explicitly and falsely claimed in a statement that the California recall election is rigged.

“Even before California voters finish casting their ballots in a recall election targeting Gov. Gavin Newsom (D), state Democrats are contemplating changes to raise the threshold for future recalls in an attempt to bring order to what has been a chaotic process,” The Hill reports.

“But their chances of amending the recall provision face a long and winding path that will ultimately require voters themselves to approve any limits on their own power.”

Said Trump: “Mark was willing to say what few others had the courage to say. In addition to his incredibly powerful stance on the massive Voter Fraud that took place in the 2020 Presidential Election Scam, he is strong on Crime, Borders, our currently under siege Second Amendment, and loves our Military and our Vets.”

Washington Post: “If appearances are votes, then Sen. Tom Cotton (R-AR) has got Fox News’s nod. He makes up more than a fifth of the total, thanks in large part to his and Fox’s shared interest in hammering President Biden on issues of national security. Three others have more than 40 appearances on the network, including former secretary of state Mike Pompeo, Sen. Ted Cruz (R-TX) and Gov. Ron DeSantis.”

Media Matters has the analysis.

Washington Post: “California is one of three Democratic-led states — the others are Virginia and New Jersey — holding statewide elections this year. In each state, party leaders acknowledge that in past elections Trump polarized and motivated voters that they had never won before his presidency. Democrats worried that his absence from the ballot, along with their party’s historic difficulties in turning voters out in nonpresidential elections, would threaten their chances.”

“Yet in all three, Democrats say they believe that the ex-president, who has hinted at a third run in 2024, still has power to mobilize liberal voters and keep suburban moderates in the Democratic tent, even if he is no longer on the ballot or in office. The recall will be the first test of whether they’re right.”

Former Sen. Al Franken (D-MN) told the Springfield Republican he has a political action committee and not ruled out a return to public office. Said Franken: “I’m keeping my options open.”

New York Gov. Kathy Hochul (D) is leaving the door open for a potential investigation into how former Gov. Andrew Cuomo (D) is spending roughly $18 million of campaign cash after he resigned from office in the wake of an investigation that found he sexually harassed multiple women, the Albany Times-Union reports.

GEORGIA U.S. SENATOR — A new Trafalgar poll in Georgia finds Hershel Walker (R) with a massive lead in the GOP primary for U.S. Senate with 76% support, followed by Gary Black (R) at 6%, Latham Saddler (R) at 3% and Kelvin King (R) at 2%.

This is almost certainly the result of high name recognition, though Donald Trump’s endorsement doesn’t hurt.

COLORADO GOVERNOR —  University of Colorado Regent Heidi Ganahl, who has long hinted at a bid for a more prominent office, will finally make her plans public in a “big announcement” scheduled for Tuesday. While she didn’t say exactly what she’d be running for, though, Ganahl​ filed paperwork for a gubernatorial campaign​ days ahead of her declaration. As the only Republican who still holds statewide office in Colorado, Ganahl has been talked up as a potential challenger to Democratic Gov. Jared Polis next year, but given his personal wealth and the state’s ongoing shift to the left, he’d be a difficult foe.

WY-AL: The fallout from Donald Trump’s decision to endorse attorney Harriet Hageman in the GOP primary to take on Rep. Liz Cheney has already begun to unfold. Two candidates, attorney Darin Smith and Air Force veteran Bryan Miller, both quickly abandoned their campaigns and threw their support to Hageman, while a would-be aspirant who interviewed with Trump but failed to earn his rose, state Sen. Bo Biteman, indicated he wouldn’t run.

However, several others remain in the race. State Sen. Anthony Bouchard, who wasn’t given the chance to woo Trump (perhaps because of his springtime admission that he impregnated a 14-year-old girl when he was 18), insisted he was staying in, saying, “Wyoming’s voters aren’t for sale.” Army veteran Denton Knapp said the same thing, though he suggested he might bail next year if Hageman “is the leader.”

Finally, there’s state Rep. Chuck Gray, who so far has declined to comment. At a candidate forum in June, Gray and Knapp both said they’d drop out if they didn’t earn Trump’s backing, though Bouchard—the leading fundraiser among challengers to date—pointedly did not.

FLORIDA GOVERNOR — “Florida Gov. Ron DeSantis has raised a lot of money for someone who hasn’t officially filed for office yet,” the Tallahassee Democrat reports.

“His political committee, Friends of Ron DeSantis, raked in $5.5 million from every state in the union in August during the peak of the COVID-19 pandemic, bringing the total to $96 million, according to a report filed with the Florida Division of Elections.”

NEW HAMPSHIRE 1ST CD — Former TV reporter Gail Huff Brown, who’s been considering a bid for New Hampshire’s 1st Congressional District, filed paperwork with the FEC on Thursday ahead of a possible campaign for the GOP nomination. Huff Brown, who is the wife of former Massachusetts Sen. Scott Brown, said she does not have a deadline for making a decision but promised an announcement “sooner rather than later.”