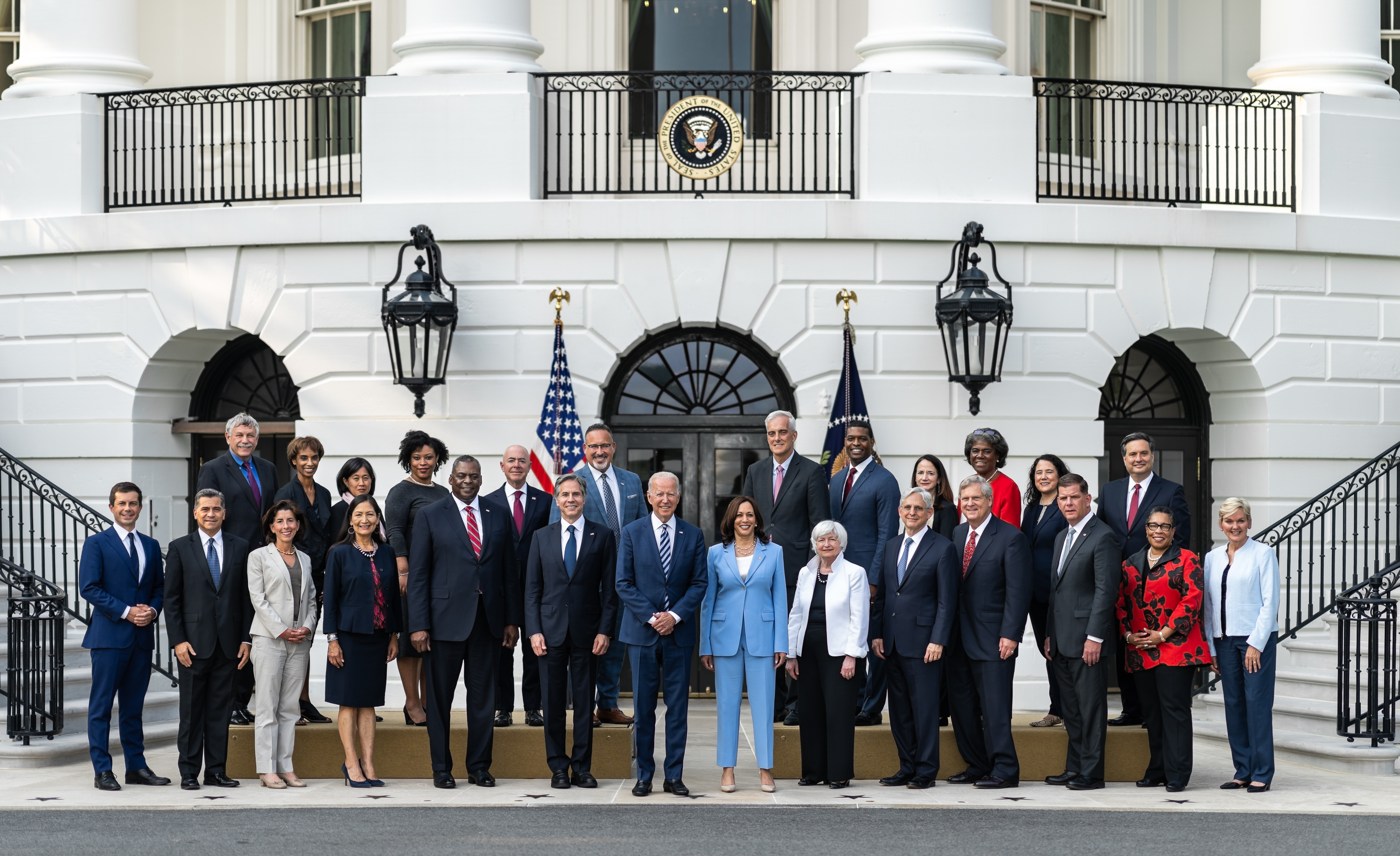 “Sen. Mark Warner (D-VA) is warning that he could vote against the $3.5 trillion budget package, if more money isn’t added for housing assistance to close the racial wealth gap in the current House version of the bill,” Axios reports.

“Warner’s threat is another indication that the proposal will face a variety of obstacles before the House and Senate can agree to a top line number, how that money is spent on specific programs — and how to pay for it all.”

Finally, a threat tied to expanding the bill rather than restricting it.

Senate Budget Committee chair Bernie Sanders (I-VT) went full “Nice bipartisan infrastructure bill you got there, would be a shame if…..” on Sen. Joe Manchin (D-WV) in response to the West Virginia Democrat’s declaration on Sunday that he won’t vote for the $3.5 trillion budget reconciliation bill.

No seriously, that’s almost exactly how Sanders put it during a CNN “State of the Union” interview: “Mr. Manchin, I know, worked very hard on the bipartisan bill. It would be a terrible thing for the American people if both of those bills fail. They are linked together. They’re going to go forward together.”

“House Democrats will consider as much as $2.9 trillion in tax hikes for the next 10 years — mostly on the extremely wealthy and corporate America — as they scramble for ways to pay for President Biden’s $3.5 trillion infrastructure and social spending plan,” Axios reports.

“A draft proposal from the Ways and Means Committee, which ricocheted across Washington Sunday night, previews epic fall fights between Democrats and some of the best-armed lobbies in America.”

“House Democrats expect to propose raising the corporate tax rate to 26.5% from 21% and imposing a 3-percentage-point surtax on individual income above $5 million,” the Wall Street Journal reports.

“The tax increases would be part of the House Ways and Means Committee’s plans to pay for the party’s priorities in a fast-moving budget bill. Those items include an expanded child tax credit, a national paid-leave program and renewable-energy tax breaks.”

“House Democrats also are considering raising the minimum tax on U.S. companies’ foreign income to 16.5% from 10.5% and increasing the top capital-gains tax rate to 28.8% from 23.8%. Lawmakers are also expected to raise money by expanding Internal Revenue Service enforcement and might include other tax increases on corporations and high-income individuals.”

Punchbowl News: “Here’s a section-by-section breakdown of the Ways and Means tax title. This will be taken up by the committee tomorrow and Wednesday. Leadership has high confidence that Rep. Richie Neal (D-MA) will get this done on time; it’s one of the most critical pieces of the entire reconciliation package.”

“Guess what’s not in here: a repeal of the SALT deduction limits. Repealing SALT caps has been a priority for blue-state Democrats ever since Republicans included it in the 2017 tax cut. Rep. Tom Suozzi (D-NY) has said that without a SALT repeal, he’ll vote against any Democratic reconciliation bill. Rep. Josh Gottheimer (D-NJ) has made similar threats, as have several other moderates.”

“House Democrats are running into another problem in their quest to craft a main component of President Joe Biden’s agenda,” Punchbowl News reports.

“With the House Energy and Commerce Committee in the throes of a marathon markup, the chair — Frank Pallone of New Jersey — may be short of the votes he needs to pass the prescription drug portion of the package.”

“That provision would allow HHS to negotiate drug discounts for Medicare recipients. This is a key element of the bill, as Democrats are looking at it for as much as $700 billion in savings. Democrats will use that money to offset other social spending in the reconciliation package.”

Florida Gov. Ron DeSantis (R) “will fine local governments $5,000 for each employee who is required to be vaccinated, threatening some cities and counties with millions of dollars in penalties for adopting strict vaccine mandates,” the Miami Herald reports.

Said DeSantis: “We are not going to let people get fired because of the vaccine mandate. You don’t just cast aside people who have been serving faithfully over this issue, over what’s basically a personal choice over their individual health.”

Florida Gov. Ron DeSantis (R) stood next to a government employee at a press conference who falsely claimed that the Covid-19 vaccine “changes your RNA.”

Capitol Police arrested a California man lurking outside the DNC headquarters in a swastika-emblazoned truck with a bayonet and machete inside.  The man told police he was “on patrol” and “began talking about white-supremacist ideology and other rhetoric pertaining to white supremacy.”

“The fence surrounding the U.S. Capitol is set to return ahead of the pro-Trump rally on Sept. 18, the head of the Capitol Police confirmed on Monday,” The Hill reports.

CNN: “Law enforcement officials are bracing for potential clashes and unrest during an upcoming right-wing rally in Washington, DC, on Saturday, as violent rhetoric surrounding the event has increased online and counterprotests are being planned for the same day.”

“The move positions the select committee on the doorstep of the Oval Office as it pursues a far-reaching inquiry into whether Trump and his White House helped plan or had advance knowledge of the insurrection perpetrated by the former president’s supporters.”

“An offshoot of the Republican Attorneys General Association that sent a robocall urging ‘patriots’ to support then-President Donald Trump at the Jan. 6 rally that preceded the storming of the U.S. Capitol held a special ‘war games’ meeting weeks before the election to discuss its strategies if Trump lost,” the AP reports.

“I don’t want to die there on the court, so I probably will retire at some point. There are a lot of different considerations, including health and also including the institutional role of the court and so forth. I’ll take those and other things into account.”  — Justice Stephen Breyer, in a Wall Street Journal interview.

“In the wake of a controversial decision on abortion rights, U.S. Supreme Court Justice Amy Coney Barrett told a crowd of more than 100 here that she doesn’t believe the highest court in the land is politically driven,” USA Today reports.

Said Barrett: “My goal today is to convince you that this court is not comprised of a bunch of partisan hacks.”

The event was a celebration the 30th anniversary of the McConnell Center at the University of Louisville, which is named after Senate Minority Leader Mitch McConnell (R-KY), who was sitting next to Barrett on stage during her remarks.

Punchbowl News: “It’s Sept. 13, and government funding runs out in 17 days. And here’s the bottom line: You should be concerned about the lack of urgency right now by your top elected officials.”

“The Senate returns to Washington today for the first time in a month. The House won’t be back until next week.”

“Here’s a reality also: There are Republicans who are privately cheering for a government shutdown to interrupt or derail passage of the Democrats’ agenda.”

And the Treasury notes that Republicans under Trump incurred $7.8 trillion in new debt over four years.

“Former president Donald Trump lashed out Monday at former president George W. Bush, saying his fellow Republican had ‘a failed and uninspiring presidency’ and shouldn’t be ‘lecturing’ Americans about the threat posed by domestic terrorism,” the Washington Post reports.

Said Trump: “So interesting to watch former President Bush, who is responsible for getting us into the quicksand of the Middle East (and then not winning!), as he lectures us that terrorists on the ‘right’ are a bigger problem than those from foreign countries that hate America, and that are pouring into our Country right now.”

Former President Donald Trump blamed Democrats in a Fox News interview for the hesitancy of some Americans to get Covid-19 vaccines.

Said Trump: “If you remember, when I was president, there were literally lines of people wanting to take it. Now, you have a different situation, and it’s very bad.”

He added: “Of course, they famously said, if Trump came up with it, I’ll never take it. They disparaged the vaccine, and now they wonder why people aren’t wanting to take it? It’s a disgrace.”

“Senate Democrats are close to an agreement on updated voting rights legislation that can get the support of all 50 Democrats,” NBC News reports.

“The forthcoming agreement comes after the For the People Act and the John Lewis Voting Rights Advancement Act were introduced in Congress in 2019 and 2021, respectively. Since their introductions, both pieces of legislation have been voted on along party lines.”

Out next month: I’ll Take Your Questions Now: What I Saw at the Trump White House by Stephanie Grisham.

Playbook: “Since news of the book broke late last week, numerous Trump-world figures have contacted Grisham to see how they are depicted in the book or to offer private messages of support, according to the source. Grisham, who is very familiar with how the Trumps operate, is also bracing for a potential smear campaign and legal fight if anyone sues to try to prevent publication.”

“She knows, the source said, that there’s a hunt on to try to get a copy of the book to the Trumps; she’s received calls from people she barely knows asking for an early copy.”

“A long-suppressed FBI report on Saudi Arabia’s connections to the 9/11 plot has revealed that Saudi religious officials stationed in the United States had more significant connections to two of the hijackers than has been previously known,” ProPublica reports.

“The Pentagon has withdrawn advanced anti-missile systems from Saudi Arabia, raising concern in the kingdom about American military commitment in the Middle East,” the Times of London reports.

“The removal coincides with a US decision to relocate weapons to Asia to counter a perceived threat from Beijing.”

The final act of the U.S. war in Afghanistan was a drone strike in Kabul that killed 10 people, but the New York Times discovered that a man the military saw as an “imminent threat” and “ISIS facilitator” was actually an aid worker returning to his family.

“The plight of the Afghan people came into stark relief on Monday when top United Nations officials warned that millions of people could run out of food before the arrival of winter and one million children could die if their immediate needs are not met,” the New York Times reports.

“We inherited a deadline, but not a plan.”  — Secretary of State Antony Blinken, quoted by Axios, defending the Biden administration’s Afghanistan pull out.

“The Biden administration is expanding its effort to find and reunite migrant families who were separated at the U.S.-Mexico border under President Donald Trump as part of a zero-tolerance policy on illegal crossings,” the AP reports.

“Karen Olick, chief of staff to Department of Homeland Security Secretary Alejandro Mayorkas, announced on Monday that she will be leaving for a new, undisclosed opportunity,” Politico reports.  “The shakeup comes as the Biden administration tries to grapple with the flow of migrants at the southern border.”

A Washington Post survey of the 20 largest school districts found that few are offering robust coronavirus screening amid vague guidelines and a surge of cases that few anticipated.

New charts from the CDC show a bump in breakthrough infections among the vaccinated, but hospitalization and deaths are really only rising for the unvaccinated, Fast Company reports.

Axios: “COVID-19 vaccine booster doses are not necessary right now based on the current evidence, international public health experts — including two FDA vaccine leaders who are leaving the agency this year — wrote a new paper in The Lancet.”

Dr. Anthony Fauci to The Skimm about mandating vaccines for air travel: “I would support that, if you want to get on a plane and travel with other people that you should be vaccinated.”