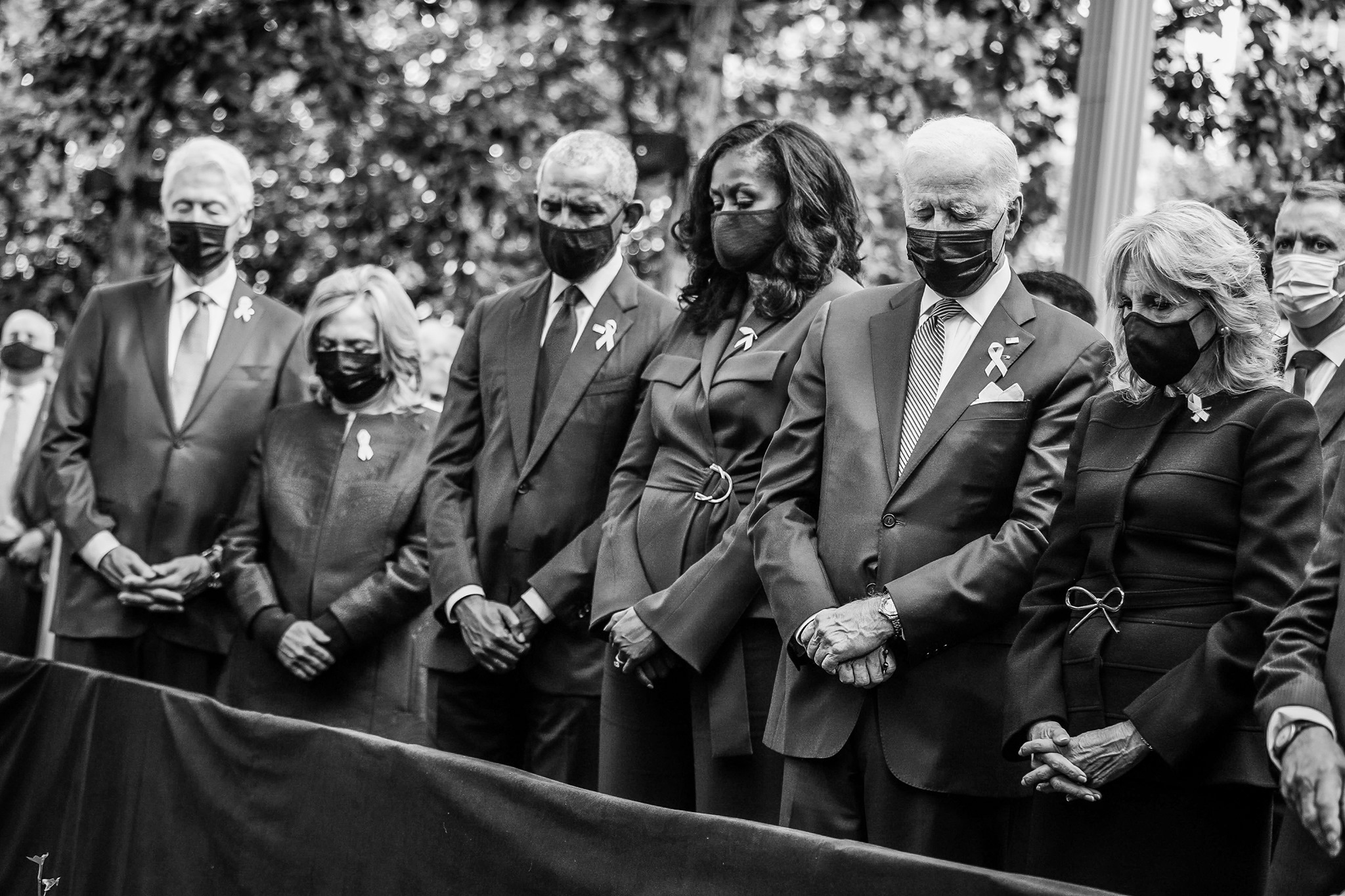 “Generally speaking, it is true that public health powers are delegated to the states, experts said. But the Constitution also gives the federal government broad powers to regulate certain matters when it perceives that states and localities are not able to do so, or are doing so adequately.”

“In this case, experts explained, Biden’s mandates pass muster because he is filtering them through the lenses of workplace safety and through the Constitutional language of federal spending powers.”

A CDC study found that unvaccinated people are 11 times more likely to die of Covid-19 than those who’ve gotten vaccinated.

Philip Bump: “The chain of correlation here is indisputable: Republicans have been less concerned about the virus, less likely to embrace practices such as masking, more likely to express opposition to vaccination and (obviously) voted more heavily for Trump — and now, after vaccinations have been made broadly available, states that are seeing the most new cases and deaths are states that are less heavily vaccinated and were more supportive of Trump last year.”

“House Democrats plan to pass a stopgap spending bill the week of Sept. 20 to wave off the threat of a government shutdown at month’s end,” Politico reports.

“Democratic leaders are thinking about combining that funding bill with action to handle the debt ceiling, in addition to funding for hurricane and flood damages, Afghan resettlement efforts and other priorities. That move would be the majority party’s first step in forcing Republicans to either pony up the votes to avert the impending debt cliff or sink the combination plan to wave off multiple national crises.”

Former President George W. Bush spoke about the threat of domestic terrorism on Saturday during a speech to mark 20 years since the Sept. 11, 2001, Reuters reports.

Said Bush: “We have seen growing evidence that the dangers to our country can come, not only across borders, but from violence that gathers within.”

Walter Shapiro: “On the 20th anniversary of the worst single day in American life since Pearl Harbor, I long to see the flags flying everywhere again.”

“I long for an outpouring of unity as Americans — whatever their political persuasion, whatever the spot on the map they call home — come together to tame the pandemic.”

“For me, part of the sadness of this Sept. 11 will flow from the fear that never again in my lifetime will Americans put aside their differences to battle a common foe.”

“Law enforcement officials are bracing for potential clashes and unrest during an upcoming right-wing rally in Washington, DC, as violent rhetoric surrounding the September 18 event has increased online and counter protests are being planned for the same day,” CNN reports.

“The chief of the Capitol Police and its top intelligence officer personally approved permits for six demonstrations to be held on Jan. 6, 2021, despite signs that one of the applications was filed for an organization that didn’t exist and that five of them were a proxy for a group staging large, violent protests across the country,” BuzzFeed reports.

However, they assessed “the Level of Probability of acts of civil disobedience/arrests to occur” during the demonstration “as Highly Improbable.”

Billionaire Marc Benioff said his company, Salesforce, will relocate any Texas employees who want to move out of the state because of its draconian new abortion law, CNBC reports.

Oklahoma Gov. Kevin Stitt (R) signed nine new anti-abortion bills, following through on his pledge to “sign every piece of pro-life legislation that came across my desk.”  He claimed to be “the most pro-life governor in the country.”

“The wealthiest 1 percent of Americans are the nation’s most egregious tax evaders, failing to pay as much as $163 billion in owed taxes per year,” the New York Times reports.  “The analysis comes as the Biden administration is pushing lawmakers to embrace its ambitious proposal to beef up the Internal Revenue Service to narrow the ‘tax gap,’ which it estimates amounts to $7 trillion in unpaid taxes over a decade.”

A Tennessee student who was mocked by adults for sharing a story of his grandmother dying of Covid-19 said he was “shaken” when adults interrupted him with laughter as he tried to argue in favor of a mask mandate in his school, WSMV reports.

Said Grady Knox: “It was complete insanity, from my perspective. If they laugh at me about, like, a personal story about my grandmother, that’s just disrespectful… I was like shaken a little bit.”

However, Knox got the last laugh when the school board approved the mask mandate.

The family of a man who died of heart issues in Mississippi is asking people to get vaccinated for COVID-19 after 43 hospitals across three states were unable to accept him because of full cardiac ICUs, USA Today reports.

Just two days after a Florida judge allowed school districts to impose mask mandates, an appeals court judge reversed the ruling, the Miami Herald reports.  “The order means that pending the outcome of an appeal, the state can continue to punish school officials who impose mask mandates without a parent opt-out.”

“The Department of Homeland Security flagged 44 Afghan evacuees as potential national security risks during the past two weeks as the government screened tens of thousands for resettlement in the United States,” the Washington Post reports.

Alaska state Sen. Lora Reinbold (R) “has asked to be excused from legislative business in the state Capitol, telling fellow lawmakers that her ban from Alaska Airlines” for refusing to wear a mask “makes it impossible to fly into Juneau,” the Anchorage Daily News reports. There is no overland road access from Reinbold’s district to the state capital in Juneau.

“A federal grand jury on Thursday indicted former Kansas state Rep. Michael Capps on 19 counts alleging that he tried to defraud federal, state and county government organizations out of more than $450,000 in coronavirus relief funding,” the AP reports.

“China made an unprecedented intervention in the global oil market, releasing crude from its strategic reserve for the first time with the explicit aim of lowering prices,” Bloomberg reports.  “The announcement comes amid surging energy costs in China, not just for oil but also for coal and natural gas, and electricity shortages in some provinces that have forced some factories to cut production. Inflation is rapidly rising too, a political headache for Beijing.”

New York Times: “It’s hard to exaggerate the role English has played in changing China’s social, cultural, economic and political landscape. English is almost synonymous with China’s reform and opening-up policies, which transformed an impoverished and hermetic nation into the world’s second-biggest economy.”

“That’s why it came as a shock to many when the education authorities in Shanghai, the most cosmopolitan city in the country, last month forbade local elementary schools to hold final exams on the English language.”

“Broadly, the Chinese authorities are easing the workloads of schoolchildren, amid an effort to ease the burdens on families and parents. Still, many Chinese people with an interest in English can’t help but see Shanghai’s decision as pushback against the language and against Western influence in general — and another step away from openness to the world.”

Washington Post: In China, the dream of an American education loses some of its gleam.

Politico: “Lawmakers have attempted to reverse the brain drain caused by top aides leaving, raising an existing salary cap on staff, proposing increases to office budgets and examining benefits. But it’s not clear whether the promise of future pay bumps can counteract the strain of working long hours in an environment where they’ve experienced an insurrection, a five-hour standoff over a bomb threat and a vehicle attack in less than a year.”

Said one aide: “I have friends doing really valuable work, doing good for the world, and they have pretty regular hours. And they don’t think about dying at work.”

“Boris Johnson raised taxes to their highest level since the Second World War on Tuesday, in a £36 billion move to reduce soaring NHS waiting lists and tackle the social care crisis,” the Telegraph reports.

“In one of the biggest political gambles of his premiership, the Prime Minister abandoned two of his flagship manifesto pledges from the 2019 election to cover the new spending.”

“Editors of 220 leading medical, nursing and public-health journals from around the world called for urgent action on climate change, in a joint editorial published on Sunday,” the Wall Street Journal reports.

Axios: “This is the first time so many publications have come together to issue such a joint statement to world leaders, underscoring the severity of the situation — with the Journal of the American Medical Association, the Lancet and the British Medical Journal among those issuing the warning.”

French Health Minister Olivier Véran announced that starting next year France will offer free contraception for women up to the age of 25, Axios reports.

California took steps toward becoming the first state to ban companies from using the recycling symbol unless they can prove the material is in fact recycled, the New York Times reports.

The Italian culture ministry has evicted Steve Bannon’s right-wing nationalist “gladiator school” from an 800-year-old Italian monastery, the Art Newspaper reports.   Bannon told the New Yorker that his plan was to “generate the next Tom Cottons, Mike Pompeos, Nikki Haleys: that next generation that follows Trump.”

“North Korea has held a parade showcasing military dogs and virus workers in orange hazmat suits, but leader Kim Jong Un still managed to seize the spotlight by looking thinner and more energetic than he has in years,” the AP reports.