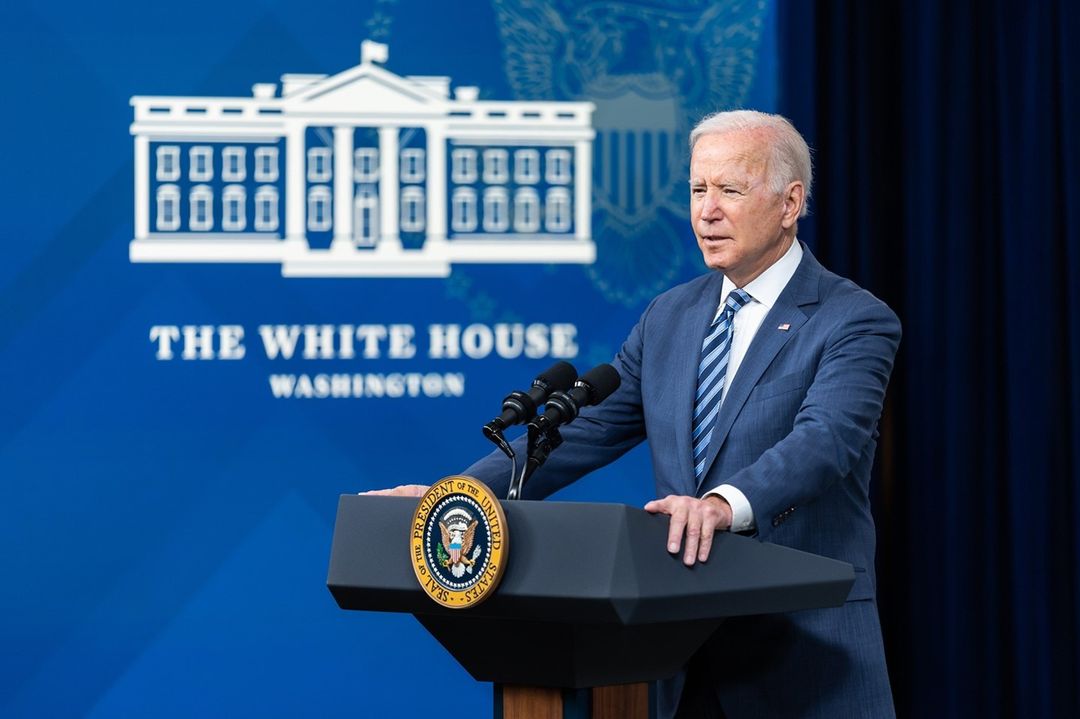 After eight months of pleading with Americans to get vaccinated, President Joe Biden went on the offensive last night and issued mandates requiring that millions get the shot. Overall, the new vaccine requirements will affect about 100 million Americans, making up two thirds of all U.S. workers.

Biden specifically called out Republican governors who have spent months blocking public health measures, saying that “if these governors won’t help us beat the pandemic, I’ll use my power as President to get them out of the way.”

The response from Republicans was sadly predictable.

It will be interesting to see how these calls for civil disobedience impact the rallies planned at the Capitol on September 18.

“Top Republicans are calling for a public uprising to protest President Biden’s broad vaccine mandates, eight months after more than 500 people stormed the U.S. Capitol to try to overturn the election,” Axios reports.

“It has been decades since America has witnessed such blatant and sustained calls for mass civil disobedience against the U.S. government.”

Said Scott: “I appreciate the President’s continued prioritization of vaccination and the country’s recovery as we move forward. As Vermont’s experience shows, vaccines work and save lives. They are the best and fastest way to move past this pandemic.”

Of course, Biden is betting Americans will back him, as nearly every public opinion poll suggests his measures are good politics as well as good for public health.

Here’s why: Roughly 65% of voters are already vaccinated and about 75% have had at least one shot. With most Americans frustrated over the pandemic — and increasingly blaming those who aren’t vaccinated — there’s not much risk to mandating the rest of Americans get the vaccine.

“President Biden says he’s met the enemy — and it’s America’s unvaccinated,”  Axios reports. “The majority of U.S. sentiment may be with him. But Biden’s still taking a major political risk, and he and his team know it. He’s testing business leaders’ resolve, putting Democrats’ standing in swing states and districts on the line ahead of 2022’s midterm elections and tempting a tsunami of litigation over new requirements that could touch 100 million Americans.”

“His aggressive new mandates on vaccinations and testing — announced in a speech ahead of TV networks’ nightly news broadcasts — are far bolder and broader than most health care, business and political leaders expected.”

It’s likely that Biden is adopting the Newsom Recall Strategy. The Los Angeles Times says Newsom changed the way he talked about the pandemic: “Much like Biden, Newsom started out this year stressing a positive message. The state was bouncing back from a difficult winter of pandemic deaths, he said, his budget would provide payments to millions of households, and under his policies, California had a rosy future. But as the Delta variant spread, that optimism clashed with an increasingly grumpy mood among voters. So Newsom changed his messaging to match the public mood.”

Matt Miller put it this way: “Enjoying the angry dad vibes from this Biden speech. He is turning the damn car around.”

Politico notes: “There is a new edginess to the way the president is speaking about the pandemic and vaccinations.”

Heather Cox Richardson has the more cynical explanation for the GOP resistance: “If Biden’s new vaccine requirements slow or halt the spread of the coronavirus, the economic recovery that had been taking off before the Delta variant hit will resume its speed, strengthening his popularity. Those Republican lawmakers furious at the new vaccine requirements are possibly less worried that they won’t work than that they will.”

Covid-19 has now killed more Americans in the last 18 months than all the wars of the 20th century combined.

Are Republicans really going to argue that getting vaccinated is an unreasonable burden? That seems like a losing message.

“Real liberty for all could not exist under the operation of a principle which recognizes the right of each individual person to use his own, whether in respect of his person or his property, regardless of the injury that may be done to others.” — Justice John Marshall Harlan, in Jacobson v. Massachusetts, in which the Supreme Court ruled 7-2 that vaccine mandates were constitutional.

“I’m very much in favor of making and encouraging mandates. This was not just superficial stuff. This is going to have a significant impact.”  — Dr. Anthony Fauci, quoted by the Washington Post, on President Biden mandating that employers require vaccination for their workers.

Air travelers who refuse to wear masks can now be fined up to $3,000, CBS News reports.  The Transportation Security Administration announced it will double fines for those who flout federal mask mandates for air travel.

Former New Jersey Gov. Chris Christie (R), who was once a close adviser to former President Trump, told Republicans gathered at the Ronald Reagan Presidential Library Thursday evening that the party must “face the realities of the 2020 election,” discredit the “extremists in our midst” and “renounce the conspiracy theories,” CBS News reports.

Said Christie: “We need to quit wasting our time, our energy, and our credibility on claims that won’t ever convince anyone of anything.”

“The Biden administration on Thursday endorsed an aggressive proposal to limit prices for prescription drugs, calling for the government to negotiate with drug makers on prices and applying those prices not just to Medicare but to all drug purchasers in the country,” the New York Times reports.

“The administration cannot make such large changes on its own; it amounts to a signal to congressional Democrats. Democratic leaders in Congress have suggested that they hope to regulate prices in some way as part of the $3.5 trillion legislative package now being considered.”

“Eighteen Trump administration appointees serving on the advisory boards of military service academies have either resigned from their positions or were terminated, following a request from the Biden administration earlier this week,” the Washington Post reports.

A federal judge ruled that Florida’s new “anti-riot” law championed by Gov. Ron DeSantis (R) as a way to quell violent protests is unconstitutional and cannot be enforced, the AP reports.

The 90-page decision found the recently-enacted law “vague and overbroad” and amounted to an assault on First Amendment rights of free speech and assembly as well as the Constitution’s due process protections.

For a guy who graduated from Harvard Law School, DeSantis sure has a knack for losing court cases.

“All children 12 and older in Los Angeles public schools must be fully vaccinated against COVID-19 by January to enter campus under an order approved Thursday by the Board of Education, the first such mandate among the nation’s largest school systems,” the Los Angeles Times reports.

“The requirement cements the standing of the L.A. Unified School District as an early adopter of COVID-19 school safety measures that are wide-reaching and aggressive — a posture that has resulted in both praise and pushback.”

“President Jair Bolsonaro of Brazil is temporarily banning social media companies from removing certain content, including his claims that the only way he’ll lose next year’s elections is if the vote is rigged — one of the most significant steps by a democratically elected leader to control what can be said on the internet,” the New York Times reports.

“The new social media rules, issued this week and effective immediately, appear to be the first time a national government has stopped internet companies from taking down content that violates their rules.”

Supreme Court Justice Stephen Breyer told NPR that he will retire on his own terms. Said Breyer: “When exactly I should retire, or will retire, has many complex parts to it. I think I’m aware of most of them, and I am, and will consider them.”

“The United States and Mexico restarted high-level economic talks Thursday after a four-year pause as top advisers to presidents Joe Biden and Andrés Manuel López Obrador expressed eagerness to make headway on issues important to both nations such as infrastructure, trade and migration,” the AP reports.

Axios: “This weekend, we commemorate the 20th anniversary of the Sept. 11, 2001 attacks which killed nearly 3,000 people. But we’ve lost track of the fact that at least that many will die of COVID-19 within the span of two days.”

“Norway’s voters are to give their verdict next week in what has become a ‘climate election’ — jolted into life by the UN report last month that issued a stark ‘code red’ over the impact of environmental change,” the Financial Times reports.

“The UN report has forced Norway to examine a big contradiction at the heart of its economy. The country is one of the largest proponents of green solutions such as electric cars and carbon capture storage: seven in 10 new cars sold last month in Norway were fully electric.”

“But the country is also western Europe’s biggest petroleum producer, with a massive sovereign wealth fund accumulated on the back of oil and gas output.”

“Just two days before armed rioters stormed and ransacked the Capitol, about 300 law enforcement officials got on a conference call to talk about the possibility that Donald Trump’s supporters would turn violent on Jan. 6,” Politico reports.

“They specifically discussed the possibility that the day’s gatherings would turn into a mass-casualty event, and they made plans on how to communicate with each other if that happened.”

“Henry ‘Enrique’ Tarrio, the leader of the Proud Boys, turned himself in to police Monday evening,” WUSA reports.  “Tarrio, chairman of the Proud Boys, an all-male organization known for pushing a far-right-wing agenda, and known for violence and neo-nazi ties, arrived at the D.C. Central Detention Facility about 9 p.m. Monday, with just hours left until the deadline a D.C. Judge gave him to self-surrender and begin serving his jail term.”

“Minnesota State Patrol officers conducted a mass purge of e-mails and text messages immediately after their response to riots last summer, leaving holes in their paper trail as the courts and other investigators attempt to reconstruct whether law enforcement used improper force in the chaos following George Floyd’s murder,” the Minneapolis Star Tribune reports.