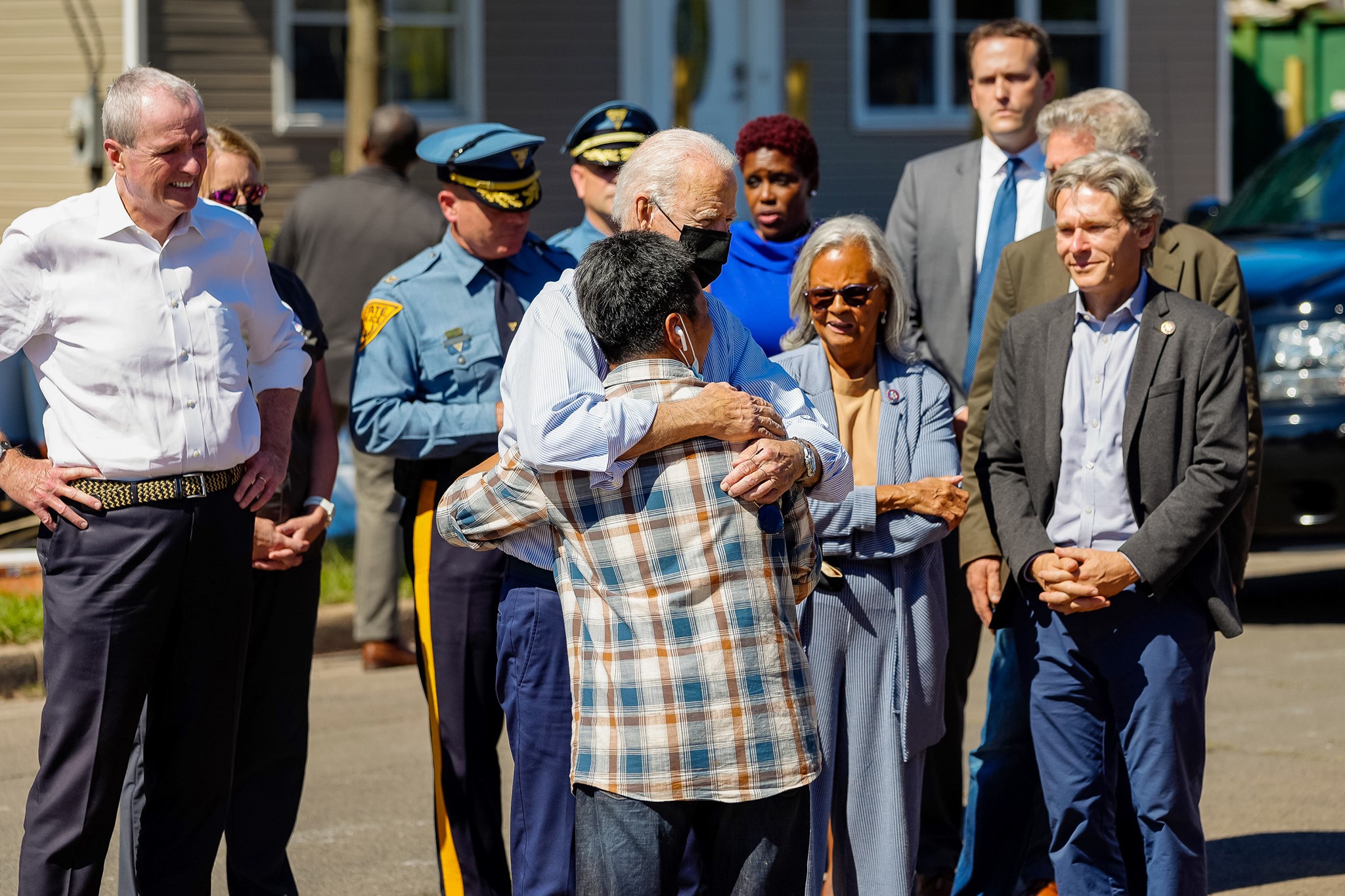 A new Economist/YouGov poll finds the new Texas law restricting abortion is not very popular, with just 36% approving to 51% disapproving.

Cook Political Report: “To hold the House in 2022, Democrats would likely need a combination of factors to break their way: aggressive gerrymanders in New York and Illinois, favorable commission outcomes or court rulings striking GOP gerrymanders, a rebound in Biden’s approval and weak turnout among casual Trump voters.”

“It’s not an impossible scenario, but the GOP’s path to 218 seats is much easier to envision today.”

Philip Bump: “When Trump announced his candidacy in 2015, the coverage evolved from treating him as a novelty to treating him as a surprising contender to folding him into traditional coverage patterns, usually undeservedly. If he announces his 2024 candidacy shortly, how will he be covered? As another presidential contender? As a guy who tried his hardest, however shambolically, to steal the 2020 election? As someone who isn’t Biden, so: good enough?”

“America had never seen a candidate like Trump in 2016. If he runs in 2024, even without his approach to politics changing, he’ll again be a candidate unlike any who has come before. And again he’ll catch much of the country unprepared.”

BOSTON MAYOR — All the candidates have been behaving like City Councilor Michelle Wu is a lock to advance past Boston’s nonpartisan mayoral primary while the real fight next Tuesday is for the second spot in the general election, and two new surveys suggest it’s more than a feeling. Both MassINC’s poll for the think tank Policy for Progress and Suffolk University’s survey for the Boston Globe have Wu firmly in first, while ​​Acting Mayor Kim Janey is barely ahead of two other city councilors, Annissa Essaibi George and Andrea Campbell.

First up is MassInc, which was in the field Aug. 25-30. Wu takes 30% in this all-Democratic field as Janey edges out Essaibi George 15-13 for second, while Campbell isn’t far behind with 11%; former city cabinet official John Barros brings up the rear with 4%. MassInc’s last poll in April, which was done weeks after Janey’s ascension made her the first woman and person of color to ever lead Boston, found Wu ahead with 19%, while Janey led Essaibi George by a much larger 18-6 margin.

Suffolk, which polled days later from Sept. 2-4, showed the candidates in the same order but found an even tighter race for the second spot in the Nov. 2 general election. Wu led with 31% as Janey outpaced Essaibi George by a mere 20-19, with Campbell at 18%; Barros also barely registered with 3%. Suffolk also found a dramatic transformation since it last went into the field in late June: Back then, Wu was at 23% while Janey beat Essaibi George 22-14.

Despite Janey’s struggles in these surveys, though, both pollsters find that she very much enjoys a positive favorable rating. MassInc gives her a 38-20 score, while Suffolk shows her in even better shape with a 56-22 favorable rating; Suffolk also asked about Janey’s approval rating, and respondents gave her the thumbs up by a 61-23 margin. And while the incumbent has attracted plenty of criticism, especially from Campbell, in recent weeks after she compared proof-of-vaccine requirements to slavery and birtherism, Suffolk’s sample still approves of her handling of the pandemic by a 64-20 margin.

Both polls, though, do find that Janey isn’t as well regarded as two of her main rivals. Wu, who has been elected citywide four times and boasts an endorsement from Sen. Elizabeth Warren, posts a 50-16 favorable rating with MassInc and a 69-14 score with Suffolk.

The two pollsters, meanwhile, have Campbell on positive ground by margins of 38-13 and 63-12, respectively. Campbell, like Janey, represents one of Boston’s nine district-level City Council seats, but she’s benefited from heavy spending by Better Boston, a PAC the Globe says is heavily funded by “wealthy charter school supporters.” Campbell also received the paper’s endorsement last week, which her allies quickly mentioned in a TV ad.

Essaibi George, who also holds a citywide seat, sports smaller 30-19 and 44-23 favorable ratings with MassInc and Suffolk. The candidate, though, has set herself apart as the one major candidate who has spoken out against the idea of reallocating funds from the police budget to other areas, which could give her a base of support with more moderate voters.

GEORGIA U.S. SENATOR / LT. GOVERNOR — To the surprise of no one, Donald Trump on Thursday backed former NFL player Herschel Walker in the GOP primary for Senate and state Sen. Burt Jones in the open seat race for lieutenant governor. Trump spent months trying to entice Walker to move back to Georgia from Texas to campaign against Democratic incumbent Raphael Warnock, while he’d previously blasted Jones’ main intra-party foe, fellow state Sen. Butch Miller, “because of his refusal to work with other Republican Senators on voter fraud and irregularities in the State.”

Meanwhile, state Agriculture Commissioner Gary Black, who is one of several Republicans also competing in the Senate primary, earned an endorsement last week from freshman Rep. Andrew Clyde. Clyde represents the most Trumpy congressional district in Georgia, and has quickly established himself as one of the far-right’s loudest voices in the House.

FLORIDA U.S. SENATOR / GOVERNOR — Recent polls have very much disagreed whether next year’s Senate and gubernatorial races start as competitive fights or if both Republican incumbents are far ahead, but the British firm Redfield & Wilton falls in the latter camp. The survey shows Sen. Marco Rubio fending off Rep. Val Demings 48-37, while he leads gadfly ex-Rep. Alan Grayson by a similar 48-36. Gov. Ron DeSantis, meanwhile, enjoys an identical 48-38 lead over Rep. Charlie Crist and state Agriculture Commissioner Nikki Fried.

KANSAS GOVERNOR — Attorney General Derek Schmidt unveiled an endorsement Wednesday from former U.S. Secretary of State Mike Pompeo, who had occasionally been mentioned himself as a possible GOP candidate.

It’s looking unlikely that Schmidt will face any serious opposition in the Republican primary now that wealthy businessman Wink Hartman has endorsed his campaign to take on Democratic Gov. Laura Kelly. Hartman, who was the GOP’s 2018 nominee for lieutenant governor, had expressed interest in running himself as recently as Wednesday, but he said four days later that he was all-in for the attorney general instead. Sen. Roger Marshall, who had been supporting former Gov. Jeff Colyer’s now defunct campaign, also threw his backing behind Schmidt on Tuesday, arguing that the GOP could now avoid “a costly, contentious, and detrimental primary race.”

MASSACHUSETTS GOVERNOR — Somerville Mayor Joe Curtatone announced Wednesday that he would take a job leading the Northeast Clean Energy Council after his term ends in January rather than seek the Democratic nomination for governor.

VA-Gov: Democrat Terry McAuliffe’s new commercial begins with audio of Glenn Youngkin declaring, “President Trump represents so much of why I’m running,” and goes on to argue that the two Republicans each don’t take the pandemic seriously. The narrator says, “Youngkin opposes requiring vaccines for healthcare workers and teachers. And despite the recommendations of the Centers for Disease Control and pediatricians, Glenn Youngkin is against requiring masks in schools.”

VIRGINIA LT. GOVERNOR — “Winsome Sears, the GOP candidate in Virginia’s lieutenant governor race, laid off her entire campaign staff 55 days out from Election Day in the commonwealth,” The Hill reports. “The layoffs come just over a week before polls open for early voting in the state.”

Meanwhile, former Trump chief of staff Reince Priebus said Wednesday that he would not seek the GOP nod to take on Evers.

NEW YORK 21ST CD — Former counterterrorism official Matt Castelli announced Wednesday that he was joining the Democratic primary to take on Rep. Elise Stefanik, the number-three Republican in the House. The current version of this seat, a sprawling rural district that includes the North Country near the Canadian border, backed Donald Trump 54-44, but it’s anyone’s guess what this constituency will look like after redistricting.

OREGON GOVERNOR — Sandy Mayor Stan Pulliam announced Tuesday that he’d seek the Republican nomination in the open seat race for governor, a move that came about five months after he set up an exploratory committee.

Pulliam, who leads a 11,000-person community east of Portland, has been a loud critic of Democratic Gov. Kate Brown’s public health measures. Earlier this year, before vaccines were widely available, Pulliam appeared on FOX Business to extol how Sandy businesses were opening in defiance of Brown’s orders, and he later took part in a lawsuit that sought to roll back the governor’s emergency powers.

Pulliam, though, does have at least one potential liability in a GOP primary. Weeks after the Jan. 6 attack on the Capitol, the mayor said that, while he didn’t believe Donald Trump deserved to be impeached, “I think in his speech he definitely helped incite violence.” The GOP field includes 2016 nominee Bud Pierce, businesswoman Jessica Gomez, and Baker City Mayor Kerry McQuisten.