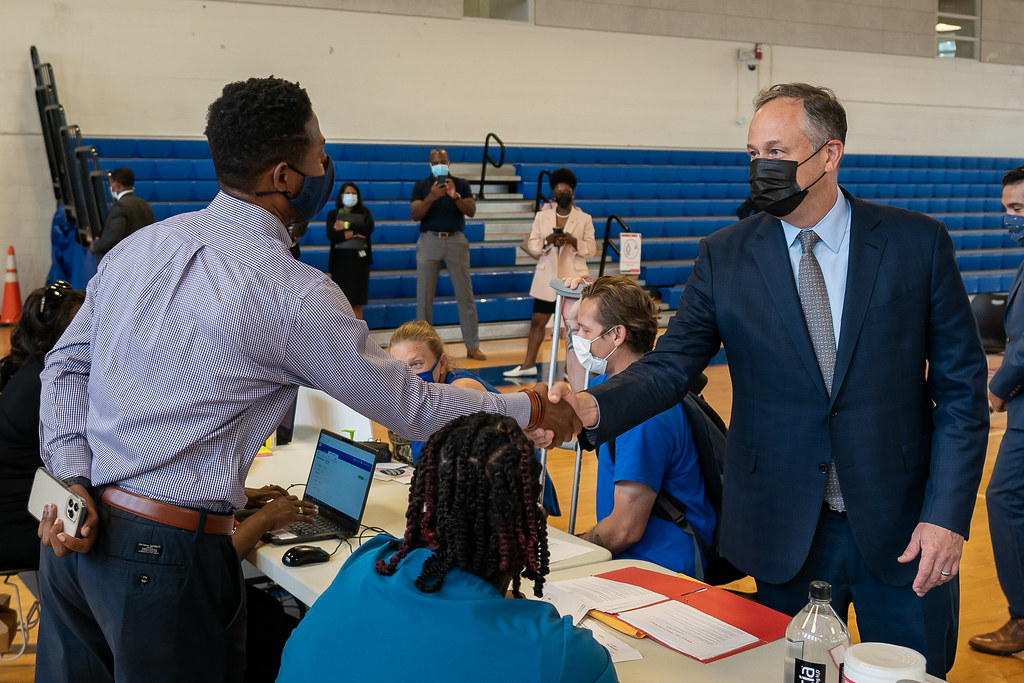 A new Washington Post-ABC News poll finds about 8 in 10 Americans “think the coronavirus pandemic will change the country in a lasting way, with more than twice as many expecting it to change for the worse rather than better, 50% vs. 21%.”

“Pessimism about the pandemic’s impact is widespread, though it peaks on the ideological right. Conservatives are among the most concerned groups, with 62% saying they expect the pandemic to change the country for the worse, compared with 47% of moderates and 44% of liberals. Republicans also are more likely than Democrats to predict the pandemic will make the country worse (56% vs. 42%).”

A new Gallup poll finds just 32% of Americans think that the CDC has communicated a clear plan of action in response to the COVID-19 pandemic.

After California’s recall race was a dead-heat just a month ago, the FiveThirtyEight polling average shows Gov. Gavin Newsom (D) opening up a double-digit lead against the effort, 53% to 42.6%.

“The campaign to recall California Gov. Gavin Newsom lost so much momentum in the past month that bettors now say there’s over an 85% chance that the effort fails,” CNBC reports.

“According to political betting website PredictIt, the Democrat’s odds of staying in office after the recall election on Sept. 14, reached their highest mark last week since early July.”

With the California recall election next Tuesday, it’s fascinating that the issue that generated the recall petition against Gov. Gavin Newsom (D) — his handling of the coronavirus pandemic — may now be what helps him stay in office.

Newsom has focused his closing message on the need to vaccinate all citizens to end the pandemic. And he’s noted the Republican candidates on the replacement ballot — most notably Larry Elder (R) — won’t do it.

From one new ad: “Here’s what you need to know about the Sept. 14 recall: Voting ‘yes’ elects an anti-vaccine Trump Republican. Voting ‘no’ keeps Gavin Newsom fighting the pandemic based on science, compassion and common sense.” The ad concludes: “If you don’t vote, we could have an anti-vax Republican governor of California. So do your part to stop the spread.”

In Virginia’s gubernatorial race, Terry McAuliffe (D) has made the same argument against Glenn Youngkin (R): “Youngkin opposes requiring vaccines for health care workers and teachers… Youngkin is against requiring masks in schools.”

It’s true these are blue states, but Democrats are not shying away from vaccine mandates — they’re running on them.

TEXAS GOVERNOR — A new Texas Politics Project poll finds Gov. Greg Abbott’s approval has sunk to 41% to 50%, with 52% of voters saying the state is headed in the wrong direction.

“Texas Gov. Greg Abbott (R) on Tuesday signed a bill into law that creates strict new voting rules in the state, ending a months-long effort by Democrats to stall the legislation by denying Republicans a quorum in the House,” the Washington Post reports.

“Florida Gov. Ron DeSantis (R) brushed aside any talk of running for president in 2024 even though he’s just days away from joining several potential contenders at a Nebraska Republican event,” Politico reports.

Said DeSantis: “All the speculation about me is purely manufactured. I just do my job and we work hard… I hear all this stuff and honestly it’s nonsense.”

“Former President Trump will barnstorm Iowa and Georgia in the coming weeks as he looks to maintain his tight grip on the GOP base,” The Hill reports.

“This comes the same day Trump endorsed a primary challenger to Rep. Fred Upton (R-Mich.). Upton has been in the House since 1987 and is the former Energy and Commerce Committee chair.”

“Upton has been a critical part of every House Republican Conference for the last 34 years, so it will be interesting to watch Michigan Republicans and the House GOP leadership.”

“Back in January 2021, as then-President Donald Trump was calling on Georgia election officials to ‘find 11,780 votes,’ new documents show that the secretary of state’s office in Georgia was in full crisis mode,” the Daily Beast reports.

“There were death threats promising to ‘make the Boston bombings look like child’s play.’ Impassioned pleas for Georgia’s top elections official to stand firm in the face of pressure from Trump to break the law. And an alarmed state official demanding an immediate investigation into Donald Trump’s ‘solicitation to commit election fraud.’”

“A former town councilor in Bedford narrowly won a seat in the New Hampshire state House on Tuesday, the first Democrat to win a previously Republican-held legislative district in any state since President Biden took office,” The Hill reports.

WYOMING AT LARGE CD — Former President Trump is set to back Wyoming attorney Harriet Hageman (R) as she readies a primary challenge against Rep. Liz Cheney (R-WY), making good on his vow to help replace the outspoken Republican after she voted for his impeachment, The Hill reports.

“Former first lady Melania Trump is reportedly telling friends she doesn’t want to return to the White House ― and that if husband Donald Trump plans to run again, he’ll have to do it without her help,” the HuffPost reports.

WISCONSIN U.S. SENATOR — Milwaukee City Councilwoman Chantia Lewis (D), who is running for the Senate seat held by Ron Johnson (R-WI), was charged with four felonies for allegedly stealing $21,000 from her own campaign and lying about it, The Hill reports. Lewis was already a longshot candidate in next year’s Democratic primary.

“When people talk about reparations, do they really want to have that conversation? Like it or not, slavery was legal. Their legal property was taken away from them after the Civil War, so you could make an argument that the people that are owed reparations are not only just Black people but also the people whose ‘property’ was taken away after the end of the Civil War.”  — California gubernatorial candidate Larry Elder (R), quoted by Yahoo News.

“I am for a woman’s right to choose. I am also for a state having the ability to make their own laws. So I support Texas in that decision, that’s their decision.”  — California gubernatorial candidate Caitlyn Jenner (R), backing a Texas law that effectively bans abortions. What?

Politico: “With a flurry of activity from his super PAC and hints dropped in private conversations with confidantes and advisers, Donald Trump is signaling a heightened interest in reclaiming the White House — and laying the necessary groundwork to do it.”

“GOP legislative leaders in key battleground states are increasingly embracing 2020 election investigations that they once held at arm’s length, as Arizona Republicans await a long-delayed final report from their own conspiracy-tinged ‘audit,’” Politico reports.

A West Virginia Metro News poll finds just 44% of West Virginians believe the 2020 presidential election was legitimate and accurate, while 43% said the result was the result of voting fraud and election rigging and 14% weren’t sure.

Ed Kilgore: “Trump’s campaign to steal the 2020 presidential election began shortly after the 2016 election, and arguably the moment of peak peril for Joe Biden’s inauguration had already passed by the time Trump addressed the Stop the Steal rally on January 6.”

“Red and blue states are increasingly moving in opposite directions on how millions of Americans can cast their ballots, exacerbating a growing divide as Republicans in states across the country — most recently Texas — impose new voting restrictions, while Democrats in others expand access,” the Washington Post reports.

“The conflicting trends are widening the disparities in election policy in the wake of the 2020 election, with Republicans heeding former president Donald Trump’s calls to tighten rules and Democrats moving to make permanent many voting policies that helped turnout soar during the pandemic.”

Punchbowl News: “We noticed a trend this summer that’s been building for some time: in the House, politics are increasingly national, and less local than ever. In other words, rank-and-file lawmakers who would be barely recognizable to most Americans on cable television are fashioning themselves as nationwide leaders, spending time on national and global issues instead of developments back home.”