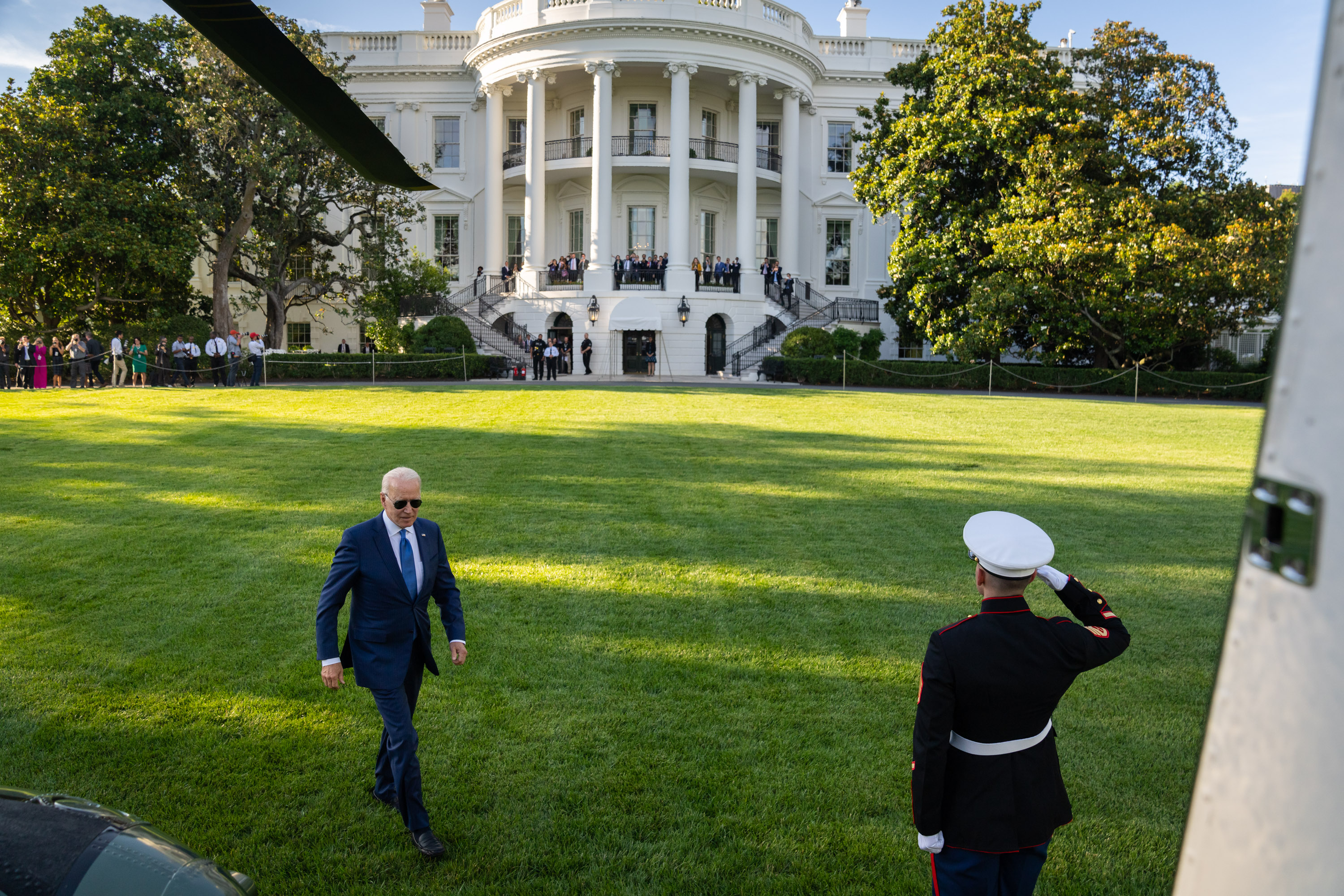 “President Joe Biden needs Democrats in Congress to give him a political boost by passing his $4 trillion economic agenda, but deepening divisions in the party threaten the chances of that happening any time soon,” Bloomberg reports.

“Lawmakers are attempting to craft one of the most complex tax and spending bills ever contemplated, with virtually no area of the budget or tax code left untouched, during just a handful of work days this month.”

President Joe Biden is set to deliver a major address on the next phase of his pandemic response this week, CNN reports.

Axios: “Covid-era economic data tends to be noisy, and problematic to interpret. But in Friday’s disappointing jobs report, one thing was pretty clear: It’s Delta’s fault.”

“After a Texas law restricting abortion went into effect Wednesday, an antiabortion organization had hoped to out those involved in unlawful procedures by collecting anonymous tips online,” the Washington Post reports.

“But Texas Right to Life’s website, ProLifeWhistleblower.com, which invited people to inform on those obtaining or facilitating abortions, has not stayed up for long, as website registration providers have said the online form to submit ‘whistleblower’ reports violates their rules.”

In a 50-50 Senate, Democrats need both men to pass anything.

A tipster notes that a plane belonging to Sen. Joe Manchin (D-WV) landed in Lexington, Kentucky today and is scheduled to return to West Virginia this afternoon.

Punchbowl News: “As the brutal behind-the-scenes brawl plays out over the Democrats’ $3.5 trillion reconciliation package, Rep. Thomas Suozzi of New York is warning once again that he and a group of blue state Democrats won’t support any legislation that fails to restore the full deduction for state and local taxes (SALT) eliminated by the 2017 GOP tax bill.”

“Why?”— Speaker Nancy Pelosi (D-CA), responding to a reporter who suggested she would need to downsize the $3.5 trillion reconciliation bill to accommodate moderates.

When asked why women who are raped and get pregnant must carry the babies to term under the new Texas law, Gov. Greg Abbott (R) pushed back saying the women still have six weeks to get abortion.  Then he further justified the law saying he was going to eliminate rape in Texas by arresting all rapists.

Greg Sargent: “If there is one thing that might get Democratic voters to take state-level races more seriously, it’s the Zombie Trumpism that continues to afflict GOP governors.”

“In states where Covid-19 cases are surging, they steadfastly refuse to take the virus seriously enough, and some are actively thwarting local efforts to combat it, a state of derangement that refuses to die.”

“As it is, the public is broadly on the side of public health mandates as a sensible way of exercising collective self-defense in response to the new Covid surge, and Democrats need to speak more forcefully to those voters. This could underscore the concrete dangers of ongoing GOP extremism and activate those voters politically, which could benefit the country if it makes GOP efforts to impair our Covid response harder to sustain.”

“Following reports of his detention by Brazilian police, former Trump spokesman Jason Miller issued a statement saying that he had been questioned by law enforcement for three hours at the airport in the capital of Brasilia,” the Independent reports.

Said Miller: “This afternoon my traveling party was questioned for three hours at the airport in Brasilia, after having attended this weekend’s CPAC Brasil Conference. We were not accused of any wrongdoing, and told only that they ‘wanted to talk’. We informed them that we had nothing to say and were eventually released to fly back to the United States. Our goal of sharing free speech around the world continues!”

Bloomberg reports that 75% of U.S. adults have now received at least one Covid-19 vaccine dose.

The Economist: “When Covid-19 vaccines were first being rolled out in December, many Americans were reluctant to get a jab, fearing that they might be unsafe or have harmful side-effects. At the time, such concerns were not unusual.”

“But according to a new poll, Americans’ continuing skepticism of covid-19 vaccines now makes it an outlier among other rich Western countries. A survey conducted between August 24th and 30th by Morning Consult, an American pollster, found that 28% of Americans say they do not plan to get vaccinated or are unsure whether they will do so, more than double the average for the 15 countries surveyed. Only Russians are less enthusiastic.”

David Leonhardt: “How small are the chances of the average vaccinated American contracting Covid? Probably about one in 5,000 per day, and even lower for people who take precautions or live in a highly vaccinated community.”

“The estimates here are based on statistics from three places that have reported detailed data on Covid infections by vaccination status: Utah; Virginia; and King County, which includes Seattle, in Washington state. All three are consistent with the idea that about one in 5,000 vaccinated Americans have tested positive for Covid each day in recent weeks.”

“The chances are surely higher in the places with the worst Covid outbreaks, like the Southeast. And in places with many fewer cases — like the Northeast, as well as the Chicago, Los Angeles and San Francisco areas — the chances are lower, probably less than 1 in 10,000. That’s what the Seattle data shows, for example.”

An Ohio judge reversed a previous court order forcing a hospital to honor a prescription of ivermectin, which infectious disease experts have warned against as a COVID-19 treatment, for a patient who has spent weeks in the ICU with the disease, the Ohio Capitol Journal reports.

Idaho public health leaders activated “crisis standards of care” for the state’s northern hospitals because there are more coronavirus patients than the institutions can handle, the Associated Press reports.

“Afghanistan’s huge narcotics trade will likely continue under Taliban rule, experts say, despite promises by the group to ban the production and trafficking of illicit drugs,” Nikkei Asia reports.

“Afghanistan’s drug industry has expanded dramatically since the 2001 U.S.-led invasion and provides a livelihood for many, making it harder to suppress without impoverishing farmers and destabilizing the country at a time of spiraling economic crisis following the foreign military withdrawal.”

Secretary of State Antony Blinken denied reports that the Taliban is preventing Americans from flying out of Afghanistan, Reuters reports.

Sarah Chayes: “Corruption in U.S.-occupied Afghanistan wasn’t just a matter of constant street-level shakedowns. It was a system. No cops or customs agents got to put all their illicit gains in their own pockets. Some of that money flowed upward, in trickles that joined to form a mighty river of cash.”

“Two surveys conducted in 2010 estimated the total amount paid in bribes each year in Afghanistan at between $2 billion and $5 billion—an amount equal to at least 13 percent of the country’s GDP. In return for the kickbacks, officials at the top sent protection back down the line.”

“Mexico’s supreme court voted unanimously on Tuesday to decriminalize abortion, a striking step in a country with one of the world’s largest Catholic populations and a move that contrasts sharply with tighter restrictions introduced across the border in Texas,” the Washington Post reports.

“The vote comes as a powerful women’s movement is transforming Mexico, where female politicians now make up half of Congress. While abortion remains illegal in most of Latin America, there has been a surge in demonstrations demanding more rights for women, particularly focused on rising violence.”

Sen. Lindsey Graham (R-SC) told the BBC that the United States “will be going back into Afghanistan” despite pulling troops out after nearly two decades.  Said Graham: “We will be going back into Afghanistan. We’ll have to, because the threat will be so large.”  He add that Afghanistan “will be a cauldron for radical Islamic behavior,” leaving the U.S. with only two options: “You can say that’s no longer my problem or hit them before they hit you.”

“When Canada’s Prime Minister Justin Trudeau called a snap election last month, the question most observers asked was would his Liberal party win enough seats to become a majority in parliament, or simply increase the size of his minority,” the Financial Times reports.

“His government was lauded for its handling of the coronavirus pandemic, injecting billions of dollars into the economy and acquiring enough vaccine doses to inoculate the entire population a few times over. Canada’s per capita vaccination rate is now one of the highest in the world.”

“But two weeks into the campaign, his Conservative rivals are ahead in the polls, buoyed by a detailed policy platform that eschews fiscal frugality for billions of dollars in new stimulus spending. Trudeau faces a likeable opponent in Conservative leader Erin O’Toole, competition from the left, and dismay among voters over what many see as an unnecessary election during a fourth wave of the pandemic, just as their children head back to school.”

“Germany has accused Russia of launching a spate of cyber attacks on politicians amid suspicions that Moscow is interfering in this month’s election to decide who succeeds Angela Merkel as chancellor,” the Financial Times reports.

New York Times: “In Moscow, the emissary, Josep Lluis Alay, a senior adviser to the self-exiled former Catalan president Carles Puigdemont, met with current Russian officials, former intelligence officers and the well-connected grandson of a K.G.B. spymaster. The aim was to secure Russia’s help in severing Catalonia from the rest of Spain, according to a European intelligence report.”

“A towering statue of Confederate Gen. Robert E. Lee in Richmond, Virginia, will be taken down on Wednesday as a symbol of racial injustice, more than 130 years after it was erected in tribute to the South’s Civil War leader,” the AP reports.  “While many other Confederate symbols across the South have been removed without public announcements beforehand to avoid unruly crowds, Gov. Ralph Northam’s office is expecting a multitude and plans to livestream the event on social media.”