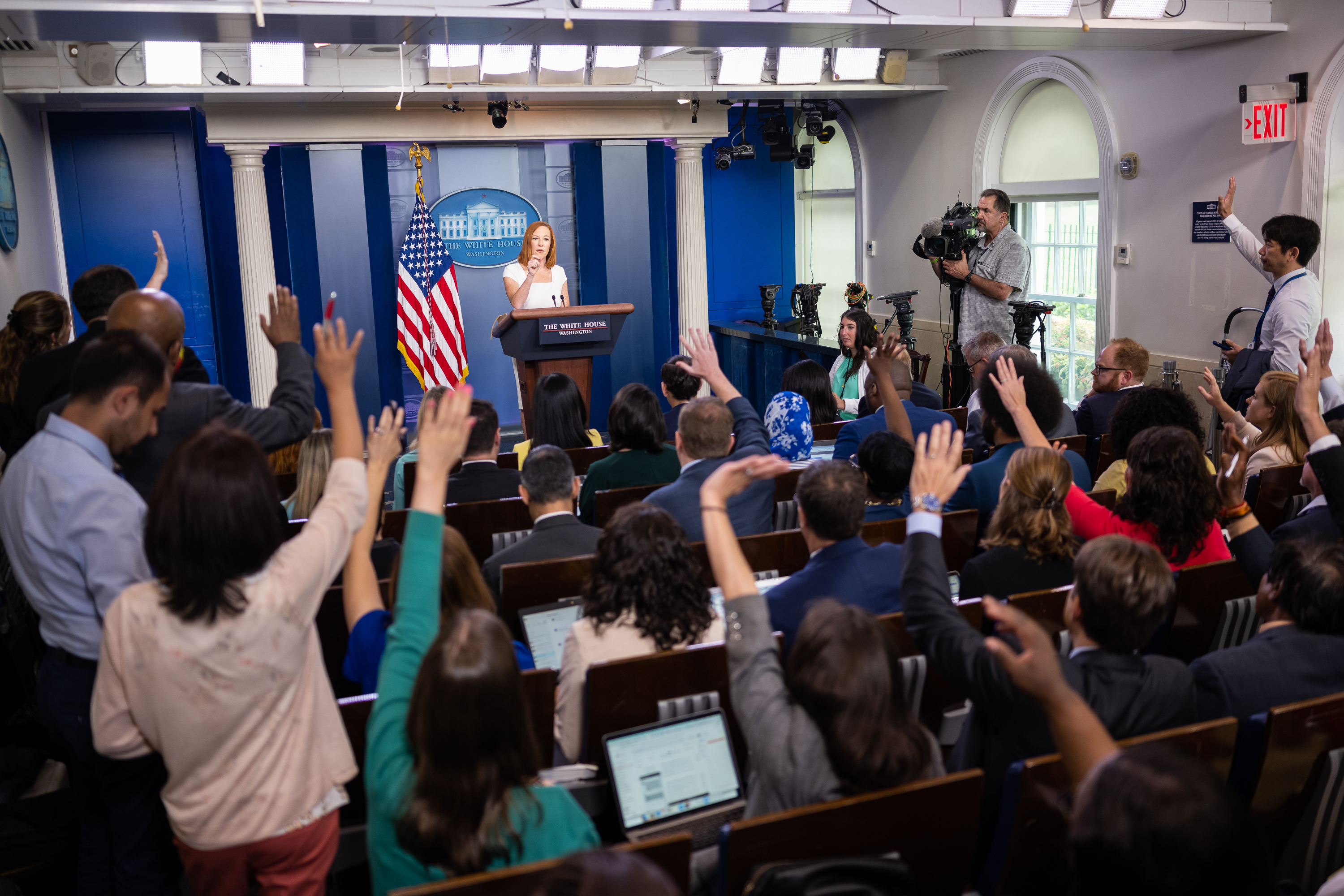 “The delta variant’s two-month surge has generated a sharp rise in public fears about contracting the coronavirus, undermined confidence in President Biden’s leadership and renewed divisions over vaccine and mask mandates,” according to a Washington Post-ABC News poll.

California Gov. Gavin Newsom (D) “is making abortion rights a central theme in his campaign to hold on to his office after a Texas ban on most abortions took effect this week, arguing Californians’ rights could be also be jeopardized if he’s replaced as governor by Republican Larry Elder,” the Sacramento Bee reports.

NPR: It’s been nearly a month since sensitive data about voting equipment in Colorado’s Mesa County was posted online by conspiracy theorists eager to cast doubt on the outcome of the 2020 election.”

“At the center of the criminal investigation into how that information was released is county clerk Tina Peters, whose whereabouts remain unknown. She hasn’t returned to work in Mesa County since the data breach was announced.”

TEXAS 12TH CD — Businessman Chris Putnam, who lost a very expensive primary challenge to Republican Rep. Kay Granger last year, announced on Wednesday that he’s trying again. In his previous campaign, Putnam slammed Granger as insufficiently loyal to Donald Trump (though Trump wound up endorsing her) and attacked her involvement in a long-delayed and over-budget development project in Fort Worth called Panther Island, which he dubbed a “boondoggle.”

It was that last bit that really shaped the contours of the race, though, as the virulently anti-tax Club for Growth abandoned many years of détente with GOP incumbents to spend heavily on Putnam’s behalf. Granger, meanwhile, went after Putnam for his weak ties to the district: He’d previously held local office in a community located outside the deep red 12th and only moved to the area shortly before commencing his campaign.

Ultimately, Granger, who is the top Republican on the powerful House Appropriations Committee and the most senior Texan in Congress, prevailed by a 58-42 margin. A big question for Putnam on his second attempt will be whether the Club backs his play once again, though it hasn’t issued another endorsement yet. And though Granger is 78 and has been in office for almost a quarter century, she’s very unlikely to retire, since she’d become Appropriations chair if Republicans win back the House next year.

That leaves no notable Republicans running here (to the extent Van De Water passed as such), though Dutchess County Executive Marc Molinaro said back in March that he was considering a bid. Molinaro​ said in April that he’d take just a couple of months to decide if he wanted to serve the remainder of his term, which concludes at the end of 2023, or seek higher office; however, while Molinaro ​soon announced he wouldn’t run for governor, we have yet to hear anything new about a possible House bid.

MISSOURI 7TH CD — Republican state Sen. Eric Burlison, who’d been considering a bid for Missouri’s open 7th Congressional District, announced his entry on Wednesday and swiftly earned an endorsement from the deep-pocketed Club for Growth. Burlison has opposed measures to mitigate the pandemic and has championed laws to allow the permitless carry of firearms.

MINNESOTA 2ND CD — Republican state Sen. Eric Pratt says he’s considering a bid against Democratic Rep. Angie Craig and “will take the next month to think about it.” Pratt’s legislative district is contained entirely within the current 2nd Congressional District, which occupies the Twin Cities suburbs.

GEORGIA 6TH and 7TH CD — Normally, a prominent figure endorsing an incumbent of their own party isn’t news, but as the Atlanta Journal-Constitution points out, there’s some important subtext behind Stacey Abrams’ decision to give her backing to Rep. Lucy McBath’s re-election campaign. That’s because the GOP’s next gerrymander of Georgia’s congressional map could throw McBath into the same district as freshman Rep. Carolyn Bourdeaux, whose seat neighbors hers.

And in soliciting donations for McBath, Abrams also said the congresswoman “has not wavered on Georgia jobs and infrastructure.” That’s an unsubtle shot at Bourdeaux’s decision to join a group of nine renegade Democrats who threatened to derail the delicate compromise on infrastructure spending now working its way through Congress. The rebels soon caved, however, with little to show for it beyond a non-binding bit of appeasement—though they did earn an epithet that may haunt them with progressives: the “Sabotage Squad.”

FLORIDA 11TH CD — Far-right activist Laura Loomer, a self-described “proud Islamophobe” who has been banned from numerous social media, rideshare, and payment services for spreading bigotry, announced Wednesday that she would challenge Rep. Dan Webster in the GOP primary.

Loomer was the GOP’s nominee last year against Democratic Rep. Lois Frankel in Florida’s 21st District, a South Florida seat located far away from this constituency in the north-central part of the state. Loomer raised $2.3 million for her campaign in that safely blue district, and while she attracted national attention after receiving the endorsement of would-be-constituent Donald Trump, she predictably lost 59-39.

Loomer had filed with the FEC earlier this cycle for a second run at Frankel but explained Wednesday that she was instead taking on Webster because he was one of the “do-nothing Republicans who are in safe red seats who have an ability to push back and fight back against what is happening and they’re not.”

Rep. Adam Kinzinger (R-IL) said that if Republicans are pushing lies and conspiracies they shouldn’t take control of the House, NBC News reports,

Said Kinzinger: “I think if we’re going to be in charge and pushing conspiracy and pushing division and pushing lies, then the Republican Party should not have the majority.”

NBC News: “Republicans are no strangers to raucous primaries… But it’s a new approach for Democrats, who have prided themselves on coalescing behind one candidate early — even when it rankles activists and disfavored candidates — and have often called attention to the chaos on the GOP side…”

“Washington power brokers have had a harder time throwing their weight around, since candidates can now build their own fundraising and support networks online. And, this year, a number of well-qualified Democrats jumped into Senate races especially early — including some who did so in order to try to get ahead of their party’s bigfoots.”

Playbook: “Suddenly, stories that weren’t great political terrain for Biden and Democrats — the fallout from the Afghanistan pullout, the new Delta surge, humdrum new employment numbers, etc. — were replaced by the Texas news, then the Supreme Court non-ruling — a storyline that Democrats know will motivate their liberal base and potentially drive moderate women to the polls.”

“And that’s giving Democrats big hopes both in upcoming elections and for 2022. They can use what’s happening in other states — and the judiciary’s non-intervention — to nationalize their campaigns. All of these changes may end up provoking a backlash that motivates turnout for Dems in the midterms.”

Washington Post: “Texas pushed McAuliffe’s efforts into overdrive… Youngkin grumbled a bit that the issue was suddenly overshadowing all others.”