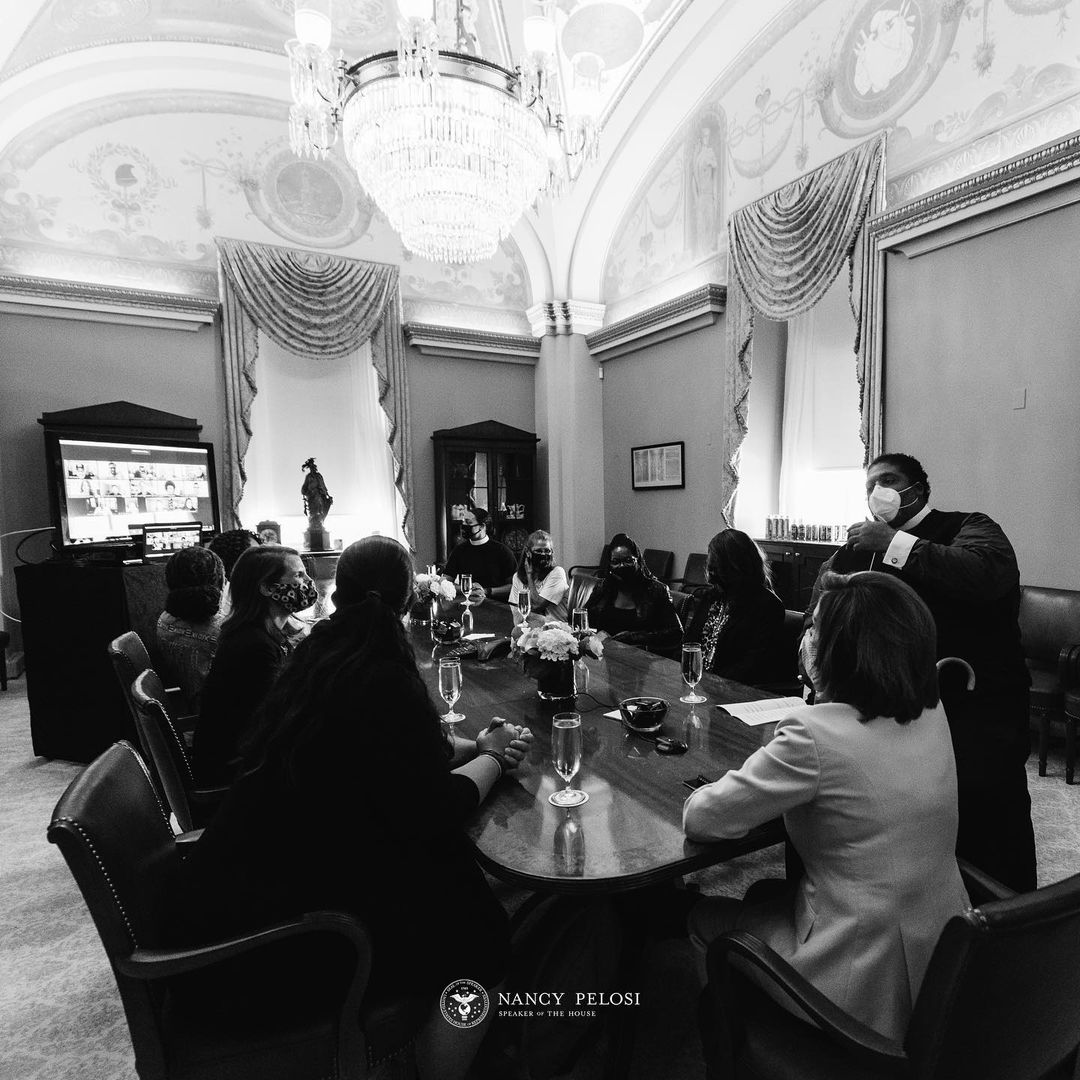 Amy Walter: “At this point, however, listening to these voters is helpful not for predicting the outcome of the 2022 election, but for understanding how they are processing the world around them. They are often much less interested in the topics and policies that get chewed over on Twitter or cable TV. Many times they also see those issues very differently than we assume they do.”

“My main takeaway was the prominence of COVID as their dominant concern. When asked about how they felt about the state of the country, almost all of them replied with a pessimistic comment. And, that negativity was almost universally centered around issues of the virus and the vaccine.”

Gabriel Sherman: “DeSantis’s biggest challenge, though, will be navigating his fraught relationship with Trump. ‘Trump fucking hates DeSantis. He just resents his popularity,’ a second Trump confidant told me… According to a source, advisers for Pompeo have been promoting DeSantis in hopes of stoking Trump’s jealousy. ‘Pompeo’s people are building up DeSantis as the leader of the Republican Party to piss Trump off,’ the source said.”

“Part of Trump’s irritation with DeSantis is that Trump feels that DeSantis doesn’t give Trump enough credit for his rise. ”

Said one prominent Republican: “Trump tells people, ‘I made Ron.’ Trump says that about a lot of people. But in this case, it’s actually true.”

Joshua Spivak looks at the mail-in balloting in the California recall election and sees mostly good news for Gov. Gavin Newsom (D) so far — with a few caveats.

Sen. Pat Toomey (R-PA) has urged his party not to nominate former President Donald Trump as its presidential nominee in 2024, CNBC reports.

Said Toomey, who is retiring next year: “I think after what happened post-2020 election, I think the president’s behavior was completely unacceptable, so I don’t think he should be the nominee to lead the party in 2024.”

Arizona Republic: “The Arizona Senate has hired an election conspiracy theorist and anti-vaccine activist to conduct its review of voter signatures on mail-in ballot envelopes in Maricopa County.”

“Shiva Ayyadurai, or ‘Dr. Shiva’ as he is known to far-right adherents, was tapped for both reviews in the waning weeks of the audit process, records show. However, he had participated in discussions with Arizona Republicans about challenging the state’s election results as far back as November.”

NORTH CAROLINA U.S. SENATOR — The News & Observer reports that the radical anti-tax Club for Growth is spending $3 million on an eight-week TV buy for Rep. Ted Budd far ahead of next year’s open seat Republican primary. The commercial consists of footage of Donald Trump endorsing Budd and praising him “as somebody that loves the state of North Carolina.”

MARYLAND GOVERNOR — Former Democratic National Committee chair Tom Perez earned endorsements this week from chapters of four labor groups, which Maryland Matters’ Elizabeth Shwe says represent a total of 40,000 state households. Shwe also writes that up until now, the only major union to take sides in the primary was the Laborers’ International Union of North America, which threw its support behind state Comptroller Peter Franchot back in February.

MINNESOTA GOVERNOR — We haven’t heard anything from Republican state Sen. Carla Nelson since she expressed interest in running for governor back in late March, and two media reports this week painted conflicting portraits of her interest in taking on Democratic Gov. Tim Walz.

The local NBC affiliate KARE 11 on Wednesday said she was “widely expected to join the race,” though there’s no quote from the senator. The Post-Bulletin, however, published a story that same day that featured an interview with Nelson about the race for governor but did not even mention her as a possible contender. Instead, reporter Matthew Stolle wrote, “Nelson said she has not decided who to support yet.” Nelson also had some nice words about outgoing state Senate Majority Leader Paul Gazelka, who is very likely to challenge Walz himself.

Another would-be contender is healthcare executive Kendall Qualls, who lost to Democratic Rep. Dean Phillips 56-44 in the 3rd Congressional District last year. Minnesota Morning Take reports that Qualls “has a group of people urging him to run,” and that he is indeed considering the idea.

Finally, while state Sen. Michelle Benson initially refused to say whether she’d remain in the primary if someone else won the state party endorsement, she later committed to ending her nascent campaign should this happen. “I respect the work of the delegates and will abide by the endorsement,” said Benson, adding, “Republicans need a party ready to defend the endorsement and win in a general election.”

NEW JERSEY GOVERNOR — The far-right Club for Growth has publicized a poll from Fabrizio Lee that gives Democratic incumbent Phil Murphy just a 43-41 edge against Republican foe Jack Ciattarelli in this November’s race. That’s extremely different from the one other survey we’ve seen in the last two months, a mid-August Monmouth University that showed Murphy well ahead 52-36.

The Club has a long history of spending heavily on races it cares about, and we’ll see if the group puts its money where its mouth is and invests in a contest that otherwise looks quite tough for Ciattarelli.

WISCONSIN GOVERNOR — Former Lt. Gov. Rebecca Kleefisch has a “special announcement” set for Sept. 9, a move that comes shortly after the Republican filed paperwork for her long-expected campaign against Democratic incumbent Tony Evers.

MISSOURI 7TH CD — The Missouri Scout writes that Joelle Cannon, a former aide to retiring Sen. Roy Blunt, is “said to be making her decision soon” about whether she’d join the GOP primary for this safely red open seat.

TENNESSEE 5TH CD — Community activist Odessa Kelly earned an endorsement this week from SEIU Local 205, which she is a member of, for her campaign to unseat Rep. Jim Cooper in the Democratic primary. The union, which represents local government employees (Kelly used to work for the Nashville parks department), backed the longtime incumbent last year when he won renomination by a surprisingly modest 57-40 margin against an underfunded foe.

Kelly, though, has already brought in a noteworthy amount of money. The challenger raised just north of $300,000 during her opening quarter, and she ended June with $140,000 in the bank. But Cooper, who like Kelly has to worry about the possibility that the GOP legislature will try to gerrymander this constituency, took in a stronger $580,000 during the second quarter of 2021, and he had $785,000 on-hand.

NEW MEXICO GOVERNOR — Despite resuming his old job as a TV meteorologist earlier this year following his failed 2020 Senate bid, Republican Mark Ronchetti will join the race for governor “in several weeks,” according to unnamed “senior sources” who’ve spoken with local reporter Joe Monahan. That trajectory—going from broadcasting to politics and back to broadcasting—is so unusual that the only other example we know of is from Latvia, but a second foray onto the campaign trail by Ronchetti would be even more unusual, if not unique, and raises some real questions.

As Monahan wonders, should Ronchetti fail again in his pursuit of statewide office, would his employer, KRQE, welcome him back once more? “Critics argue the station is licensed by the FCC to serve the public interest, not as a Republican bullpen for potential GOP candidates,” observes Monahan. Then again, does KRQE or its owner, the $6 billion media giant Nextar, even care?

Whatever happens (or, more likely, doesn’t happen) on the journalistic ethics front, Ronchetti would join a primary field that already includes retired Army National Guard Brig. Gen. Greg Zanetti, Sandoval County Commissioner Jay Brock, and state Rep. Rebecca Dow. We won’t have a sense of how this gang’s been doing on the fundraising front until Oct. 11, when reports covering a six-month period starting April 6 are due to be filed. Democratic Gov. Michelle Lujan Grisham, who is seeking a second term, had $134,000 on hand as of her previous report.