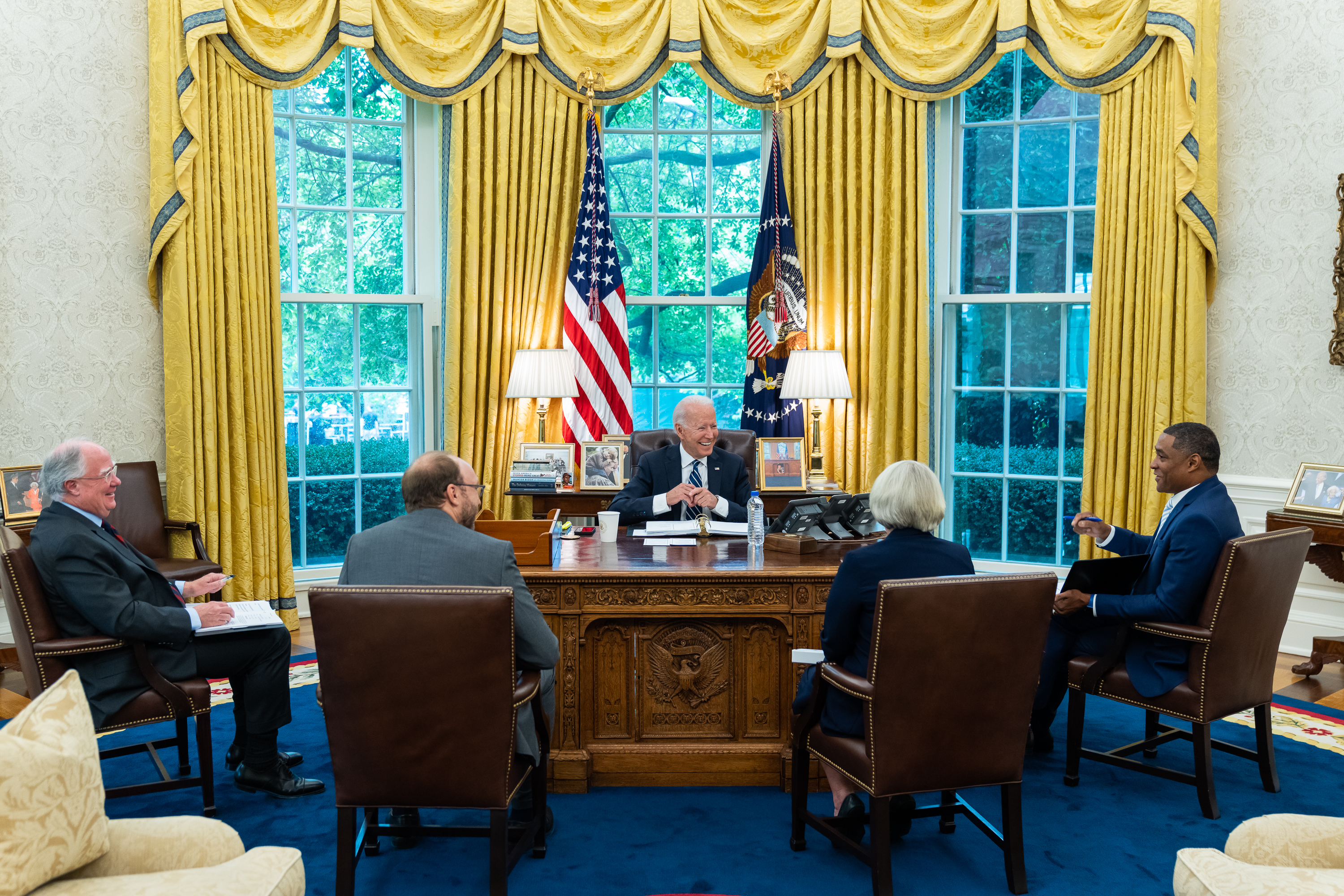 “President Biden is eager for a fight over abortion — an issue he sees as politically advantageous after the conservative Supreme Court left in place the near-ban in Texas,” senior officials tell Axios.

“The White House sees abortion as a potent issue ahead of next year’s midterms, with Biden under huge pressure on Afghanistan, inflation, crime and the border.”

“I know you’ve never faced those choices, nor have you ever been pregnant, but for women out there who have faced those choices, this is an incredibly difficult thing.” — White House press secretary Jen Psaki, shutting down a male reporter who asked why President Biden supports abortion against his Catholic faith.

Adam Serwer: “The conservative majority on the Supreme Court was so eager to nullify Roe v. Wade, the 1973 precedent securing the right to abortion, that it didn’t even wait for oral arguments…”

“Also remarkable was that the Supreme Court acted through its ‘shadow docket,’ the decisions the justices make regarding emergency appeals such as death-penalty cases. Under normal procedure, cases take time to work their way through the lower courts, and are received at the Supreme Court with extensive records, briefs, and oral arguments. Ideally, this allows the justices to ensure that their hugely consequential decisions are properly informed and made as carefully as possible, weighing all the relevant legal and constitutional issues.”

“But there are some circumstances in which the Court needs to act quickly to prevent some imminent or irreversible harm. There’s nothing inherently sinister about that. The shadow docket, though, now resembles a venue where the conservative legal movement can get speedy service from its friends on the Court.”

New York Times: “A process intended to help the court deal with emergency petitions and routine matters has grown into a backdoor way of making major policy decisions.”

David Frum: “Today, accountability has suddenly arrived. Texas Republicans have just elevated abortion rights to perhaps the state’s supreme ballot issue in 2022. Perhaps they have calculated correctly. Perhaps a Texas voting majority really wants to see the reproductive lives of Texas women restrained by random passersby. If that’s the case, that’s an important political fact, and one that will reshape the politics of the country in 2024…”

“If the Texas Republicans prosper politically, then abortion-rights advocates must accept that the country truly is much more conservative on abortion than they appreciated and adjust their goals accordingly. But if not, and I’m guessing that the answer is not, anti-abortion-rights politicians are about to feel the shock of their political lives. For the first time since the 1970s, they will have to reckon with mobilized opposition that also regards abortion as issue No. 1 in state and local politics.”

Despite the historic nature of the new Texas law banning abortion after six weeks, the word “abortion” was barely mentioned on Fox News yesterday.  That’s probably a better indicator than any poll of how unpopular the Texas law is.

How well will Texas’s abortion ban play out for Republicans if it’s still around or salient by election time? If Glenn Youngkin’s campaign for Virginia governor is any indication, it could be quite damaging: he won’t answer whether he supports the ban or not.

Walter Shapiro: “Women in Texas are the latest victims of a Republican Party that has veered off into levels of zealotry on abortion unimaginable in the days when Ronald Reagan only gave lip service to the cause. But the remedy lies in our politics as much as long-shot dreams of some kind of reprieve from the Supreme Court.”

“Conversations Thursday with political consultants in both parties led to a surprising conclusion: Abortion will prove to be a more potent factor for Democrats in 2022 if it is put in the larger context of Republican extremism.”

Playbook: “There’s virtually nothing Democrats can do. President Joe Biden and Speaker Nancy Pelosi can say they’ll try, and liberals can make demands, but the votes simply aren’t there in the Senate to pre-empt the Supreme Court’s upcoming ruling on whether to overturn Roe v. Wade.”

Florida Gov. Ron DeSantis (R) told WPLG he will “look more significantly” at the new Texas abortion ban after the Supreme Court declined to block it. Said DeSantis: “What they did in Texas is interesting and I haven’t really been able to look at enough about it.” He added: “They’ve basically done this through private right of action. So, it’s a little bit different than how a lot of these debates have gone, so we will have to look. I am going to look more significantly at it.”

Tennessee Gov. Bill Lee (R) said he has no plans to introduce anti-abortion legislation similar to what Texas adopted earlier this year, the Associated Press reports.

“Last year, Lee signed off on one of the strictest abortion bans in the country, but it was promptly blocked by federal court from being implemented. He has since vowed to do ‘whatever it takes in court’ to defend the measure.”

“Under the Tennessee law, abortions are banned once a cardiac activity is detected — about six weeks into pregnancy, before many women know they’re pregnant.”

Antiabortion groups are monitoring anonymous tips about potential violations of the new Texas abortion law, “which could include not only health-care workers who assist in abortions but also people who help fund, transport or counsel patients,” the Washington Post reports.

“Providers were huddling with lawyers to prepare to challenge the lawsuits they think will eventually come.”

Job creation for August was a huge disappointment, with the economy adding just 235,000 positions, CNBC reports.

Economists surveyed by Dow Jones had been looking for 720,000 new hires.

This is obviously a reaction to the surging Delta variant. The economy will not fully rebound until the pandemic is behind us.

“The Biden administration faces internal dissatisfaction over the looming expiration of unemployment benefits for millions of workers, with numerous White House economic officials frustrated by President Biden’s support for letting the aid expire next week,” the Washington Post reports.

“The internal White House frictions over the unemployment cliff reflect the challenge facing Biden as he tries to restore economic normalcy without punishing low-income Americans, as well as ideological divergences within the administration.”

Children made up more than one-fifth of total Covid-19 cases in the U.S. for week ending Aug. 26, USA Today reports.

“Top federal health officials have told the White House to scale back a plan to offer coronavirus booster shots to the general public later this month, saying that regulators need more time to collect and review all the necessary data,” the New York Times reports.

“A large, randomized trial led by researchers at Stanford Medicine and Yale University has found that wearing a surgical face mask over the mouth and nose is an effective way to reduce the occurrence of COVID-19 in community settings.”

“It also showed that relatively low-cost, targeted interventions to promote mask-wearing can significantly increase the use of face coverings in rural, low-income countries.”

Said Manchin: “If the country is facing what we’re facing now… I would ask my colleagues and all of the Senate to hit the pause button on the $3.5 trillion. Let’s sit back. Let’s see what happens. We have so much on our plate.

Jonathan Chait: “The greatest danger posed by Manchin’s pause gambit is that it will wreck the carefully negotiated strategy Democratic leaders have crafted. Facing moderate and progressive factions that don’t trust each other, they set out to pass the bipartisan infrastructure bill (favored by the center) and Biden’s human capital bill (favored by the left) in tandem. Manchin reportedly advised the moderate House Democrats who, months into the schedule, decided to wreck the strategy and insist on infrastructure first.”

“The compromise negotiated in the House requires an expedited schedule, with an infrastructure vote by the end of the month. The sequence is still workable, as long as both factions have an understanding of what they’ll include in the social spending bill. Without that understanding in place, progressives have every incentive to vote down the infrastructure bill, which will in turn contribute to the impression of dysfunction and chaos.”

Progressives are firing warning shots right back at Sen. Joe Manchin (D-WV), who is demanding that Democrats put a “strategic pause” on the $3.5 trillion infrastructure bill.

Rep. Alexandria Ocasio-Cortez (D-NY) offered an alternative to Manchin’s demand: “Or maybe we hit the ‘cancel’ button on this so-called ‘bipartisan’ charade of an Exxon lobbyist drafted infrastructure bill unless we actually pass a law that helps people’s lives with healthcare expansion, childcare, climate action, etc,” she tweeted.

House Progressive Caucus Chair Pramila Jayapal (D-WA), who’s been at the forefront of hammering out the sweeping $3.5 trillion proposal, declared “no more pauses. No more excuses.”

Rep. Rashida Tlaib (D-MI) ripped Manchin for trying to throw a wrench into passing legislation that addresses climate change even as extreme weather events like Hurricane Ida wreak havoc across the country.

“The select panel investigating the Jan. 6 Capitol insurrection has asked for House Minority Leader Kevin McCarthy’s phone records to be preserved as it expands its inquiry,” Politico reports.

“McCarthy’s name was included in a broad request the select panel sent Monday to social media platforms and telecommunications companies, asking them to preserve records that could be relevant to the probe of the attack.”

Biggs called the two Republicans “two spies for the Democrats that we currently invite to meetings, despite our inability to trust them.”

Rep. Mo Brooks (R-AL) claimed that, if House investigators looking into the Jan. 6 Capitol riots seize his phone records to determine his role in the insurrection, all they’ll find are “amusing” GIFs and emojis sent by the congressman’s children, AL.com reports.

South Dakota’s top public safety official said Attorney General Jason Ravnsborg (R) should have been charged with manslaughter instead of misdemeanors for his role in a hit-and-run vehicle crash that killed someone, the Sioux Falls Argus Leader reports.  The resolution of the criminal case into Ravnsborg has rekindled talks of impeachment, which would require action by the state House.

Associated Press: “Sen. Angus King (I-ME) said that his breakthrough case of COVID-19 produced symptoms that were double the worst head cold he’d ever experienced, and he credited the vaccine for keeping him out of the hospital.”

“The 77-year-old independent said he hopes his rough-and-tumble experience in which he received an infusion to help fight the virus will help others who might be on the fence about getting the vaccine.”

Colorado Gov. Jared Polis (D) “said he supports reimagining Colorado’s state tax structure to eliminate income taxes, as nine other states have done,” the Denver Post reports.  “Despite the governor’s wishes, there is no indication Colorado will become the 10th state to abolish its income tax anytime soon.”

Rep. Alexandria Ocasio-Cortez (D-NY) urged the Senate to reject Rahm Emanuel’s nomination for U.S. ambassador to Japan, accusing the former Chicago mayor of helping “cover up” the murder of 17-year-old Laquan McDonald by a police officer in 2014, Axios reports.

“The U.S. government has lost contact with thousands of migrant children released from its custody,” Axios reports.

“Roughly one-in-three calls made to released migrant kids or their sponsors between January and May went unanswered, raising questions about the government’s ability to protect minors after they’re released to family members or others in the U.S.”

“Kelly Craft, who was appointed to two ambassadorships under President Donald Trump, directed government business to Trump’s hotel in Washington while in office, emails released by the State Department show,” the Washington Post reports.