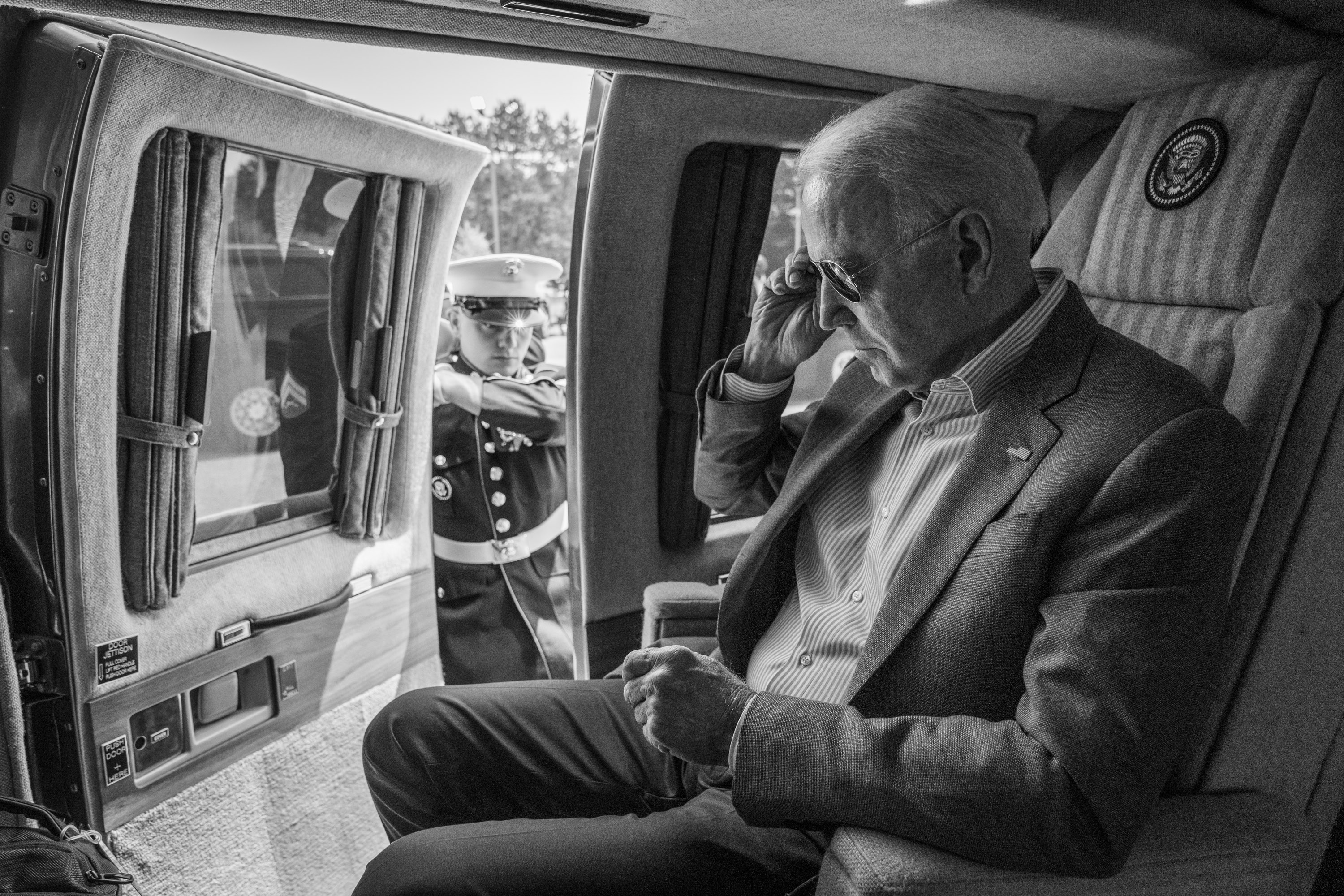 Washington Post: “A Texas law that bans most abortions after six weeks of pregnancy went into effect Wednesday, as a midnight deadline for the Supreme Court to stop it came and went without action.”

“The court could still grant a request from abortion providers to halt the law, one of the nation’s most restrictive. But both the statute’s proponents and opponents had expected word from the high court before the statute went into effect Sept. 1.”

“The law effectively eliminates the guarantee in Roe v. Wade and subsequent Supreme Court decisions that women have a right to end their pregnancies before viability, abortion providers said, and that states may not impose undue burdens on that decision.”

Well, if only disgruntled progressives had come out to vote in 2014 and 2016. There would be a 6-3 Liberal Majority on the Court today if we had kept the Senate in 2014 and President Obama appointed Scalia’s replacement and then President Hillary Clinton would have nominated the replacements for Kennedy and Ginsburg. Maybe Kennedy doesn’t retire in that scenario, but then it would be a 5-4 Liberal Court.

New York Times: “Still, after a half-century in national politics, Mr. Biden knows better than most how quickly the news cycle moves on. His advisers and allies expect another round of tough criticism around the 20th anniversary of the Sept. 11 attacks with pictures showing the Taliban flag flying over Kabul.”

“Within days or weeks of that, though, they assume that attention will shift back again to the coronavirus pandemic, the president’s proposals for large public works projects and social welfare programs, and a dozen other issues that will absorb the public more than far-off Afghanistan.”

White House chief of staff Ron Klain told MSNBC that he wasn’t sure whether the U.S. would ever recognize the Taliban as Afghanistan’s legitimate government.

“Less than 24 hours before the U.S. completed its withdrawal from Afghanistan, the Taliban stopped a bus headed for the Kabul airport and forced all the passengers off, saying the bus might be rigged with explosives and had two possible suicide attackers on board, according to the account of a U.S. citizen who was on the bus,” NBC News reports.

Aaron Blake: “They’ve trafficked repeatedly in recent days in false, misleading or unproved allegations involving the Taliban hanging someone from an American helicopter, President Biden skipping a ceremony for 13 Americans killed last week, military dogs being left behind, and $80 billion in military equipment being left for use by the Taliban. With the assistance of some high-profile conservatives and even congressional Republicans, these reports have proliferated on social media.”

“The process really kicked into gear over the weekend when conservatives accused Biden of skipping the ceremony at Dover Air Force Base in Delaware.”

“More than 30 companies including Apple, AT&T and Verizon, received a request for phone records from congressional investigators Monday.”

“A company owned by House Majority Leader Kevin McCarthy’s in-laws won more than $7 million in no-bid and other federal contracts at U.S. military installations and other government properties in California based on a dubious claim of Native American identity by McCarthy’s brother-in-law,” the Los Angeles Times reports.

“The Justice Department on Tuesday arrested a Florida man over a scheme that involved seeking money from Florida Republican Don Gaetz to help halt the sex-trafficking investigation of his son, Rep. Matt Gaetz (R-FL),” the Washington Post reports.

“Stephen Alford was charged with wire fraud in connection with the alleged $25 million plot, which famously came to light months ago — shortly after the revelation that Matt Gaetz was under investigation.”

Rep. Markwayne Mullin (R-OK) asked the U.S. ambassador to Tajikistan to help him move large amounts of money into the country for an Afghanistan rescue effort last week and made threats when he was rebuffed, the Washington Post reports.  Mullin said he was planning to hire a helicopter to evacuate five American citizens, a mother and her four children, and sought the ambassador’s help.

“A wave of changes to Texas elections, including new voting restrictions, are headed to Gov. Greg Abbott’s desk,” the Texas Tribune reports.

“Three months after House Democrats first broke quorum to stymie a previous iteration of the legislation, Republicans in the House and Senate Tuesday signed off on the final version of Senate Bill 1 to further tighten the state’s voting rules and rein in local efforts to widen voting access. Abbott, a Republican, is expected to sign it into law.”

David Leonhardt and Ashley Wu: “Since the pandemic began, Covid has often followed a regular — if mysterious — cycle. In one country after another, the number of new cases has often surged for roughly two months before starting to fall. The Delta variant, despite its intense contagiousness, has followed this pattern.”

“After Delta took hold last winter in India, caseloads there rose sharply for slightly more than two months before plummeting at a nearly identical rate. In Britain, caseloads rose for almost exactly two months before peaking in July. In Indonesia, Thailand, France, Spain and several other countries, the Delta surge also lasted somewhere between 1.5 and 2.5 months.”

“And in the U.S. states where Delta first caused caseloads to rise, the cycle already appears to be on its downside. Case numbers in Arkansas, Florida, Louisiana, Mississippi and Missouri peaked in early or mid-August and have since been falling.”

“The largest block of House Republicans will try to use the annual markup of the federal defense spending bill starting Wednesday to message against any recognition of the Taliban’s legitimacy,” Axios reports.

“All of their proposed amendments to the National Defense Authorization Act are expected to fail, but it’s part of a broader GOP messaging offensive to attack the Biden administration and Democrats over the withdrawal from Afghanistan.”

“Ever since the Pirate movement burst on to Europe’s political scene as a rebellious force 15 years ago, its anti-establishment parties have remained on the fringes of mainstream politics,” the Financial Times reports.  “But when Czech voters head to the polls for a parliamentary election in early October, there is a chance that the party will win enough votes to become the EU’s first Pirates to enter national government.”

“North Korea appears to have resumed operation of its plutonium-producing reactor at Yongbyon in a move that could enable the reclusive country to expand its nuclear weapons arsenal,” the Wall Street Journal reports.   “The development… adds a new challenge to President Biden’s foreign policy agenda, alongside the dangerous U.S. withdrawal from Afghanistan and stalemated talks on restoring the 2015 deal on Iran’s nuclear program.”

“Social Security will have to cut benefits by 2034 if Congress does nothing to address the program’s long-term funding shortfall,” CNN reports. “That’s one year earlier than reported last year. By that time, the combined trust funds for Social Security will be depleted and will be able to pay only 78% in promised benefits to retirees and disabled beneficiaries.”

Relax. This is only talking about the Trust Fund, and this funding problem can be immediately solved by removing the income cap, currently set at $137,000. That means that if someone is making 200k or 2M a year, only $137k of their income is taxed for Social Security. I know, it’s ridiculous.

Paul Krugman: “You don’t hear much these days about ‘economic anxiety.’ Most observers acknowledge that the rise of the Trumpist right was driven by racial and social antagonism, not economic populism.”

“Yet there is an economic element to political extremism, just not what you’d think. Right-wing extremists, and to some extent even more mainstream conservative media, rely on financial support from companies selling nutritional supplements and miracle cures — and that financial support is arguably a significant factor pushing the right to become more extreme. Indeed, right-wing extremism isn’t just an ideological movement that happens to get a lot of money from sellers of snake oil; some of its extremism can probably be seen not as a reflection of deep conviction, but as a way of promoting snake oil.”

“Two of the FDA’s most senior vaccine leaders are exiting from their positions, raising fresh questions about the Biden administration and the way that it’s sidelined the FDA,” Endpoint News reports.

Axios: “The FDA appears to be increasingly rudderless at a crucial time in the pandemic. The agency still has no permanent commissioner and now is losing two highly regarded vaccine experts all while officials weigh full approval of the COVID-19 vaccines for adults, initial authorization for kids, and booster shots for many.”

The Florida Department of Health has started using what one economist describes as a “statistical sleight of hand” to make daily COVID-19 deaths appear much lower than they actually are, the Miami Herald reports.

Liberty University, which did not require that students be vaccinated, has announced a campus-wide quarantine amid a drastic spike in Covid-19 cases, the Washington Post reports.

New York Times: “Increasingly, state legislatures, especially in 30 Republican-controlled states, have seized an outsize role for themselves, pressing conservative agendas on voting, Covid-19 and the culture wars that are amplifying partisan splits and shaping policy well beyond their own borders.”

“Indeed, for a party out of power in Washington, state legislatures have become enormous sources of leverage and influence. That is especially true for rural conservatives who largely control the legislatures in key states like Wisconsin, Texas and Georgia and could now lock in a strong Republican tilt in Congress and cement their own power for the next decade. The Texas Legislature’s pending approval of new restrictions on voting is but the latest example.”