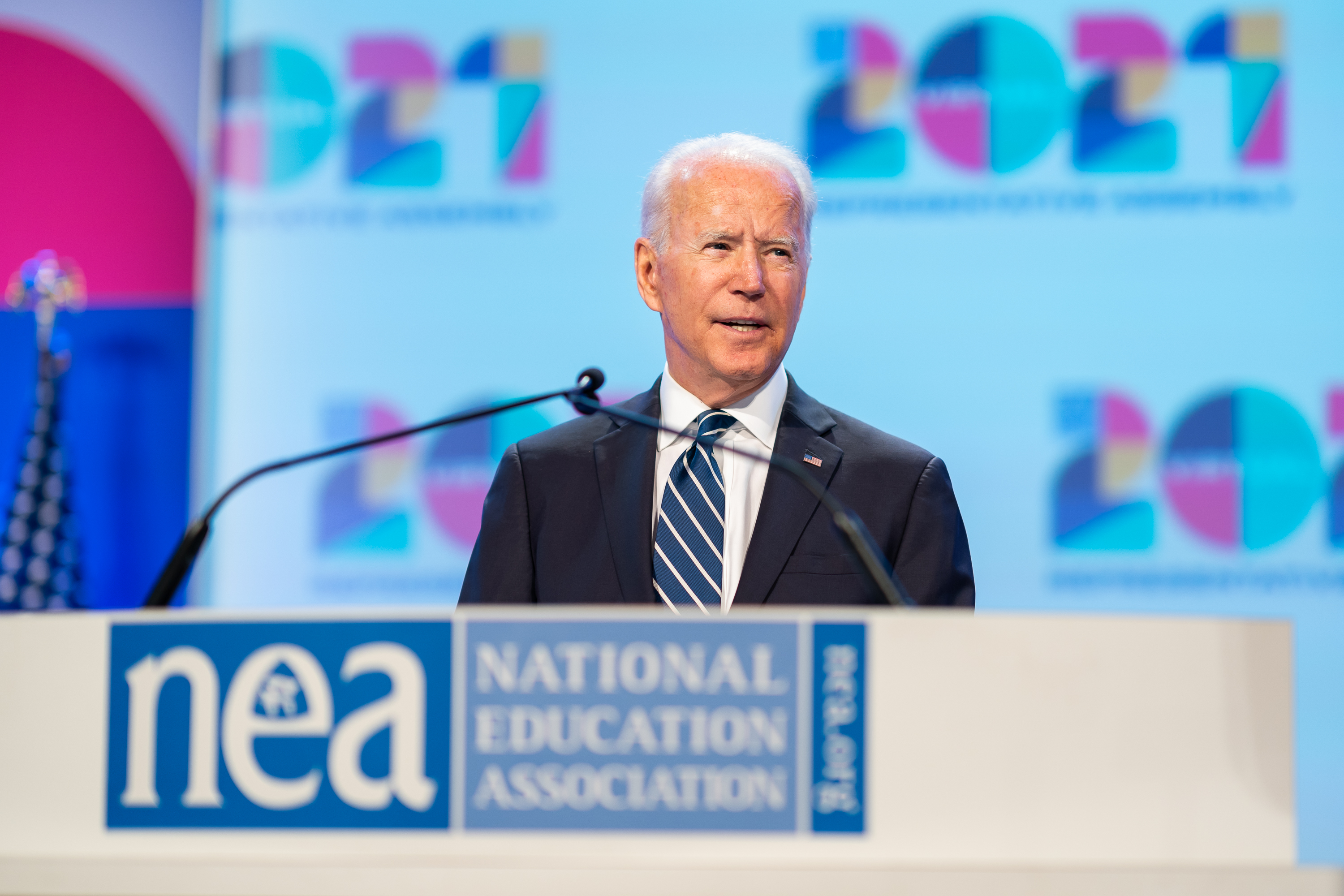 A new Pew Research poll, conducted prior to the last troop leaving Afghanistan this week, found 54% of U.S. adults said the decision to withdraw troops from the country was the right one while 42% said they think it was the wrong move.

Also worth noting: 69% feel the United States mostly failed in achieving its goals in Afghanistan.

“In his fight to keep his political life afloat, Gov. Gavin Newsom (D) has staked his future on how well he can emulate a budget-slashing tea party darling: former Wisconsin Gov. Scott Walker (R),” the Los Angeles Times reports.

“Walker may seem an unlikely role model for the liberal Californian, but he has notched one big accomplishment that Newsom now covets. The Republican is the only governor in American history to successfully beat back a recall. He did so in 2012 by pivoting from playing defense on his record, namely a highly polarizing measure to clamp down on organized labor, to going on offense against those trying to remove him.”

In one extraordinary if entirely predictable development, voters who say they’ve received a COVID vaccination (81% of all respondents) oppose the recall 59-36, while the small minority who haven’t been vaccinated (18% of the sample) back it 71-22—a split of 72 points.

SurveyUSA also added a new question this time, asking voters whether they plan to skip the second question on their ballots, which allows them to pick a replacement should Newsom be recalled. Newsom has asked supporters to do just that, and 28% of all respondents, including 43% of Democrats and 51% of recall opponents, say that’s their plan. In addition, another 9% said they’d leave the question blank after reviewing the entire list of all 46 candidates (the poll was, as you might guess, conducted online).

The top preference of the remaining 63% of the sample is still conservative radio host Larry Elder, who takes 27% of the vote; everyone else is in single digits. That’s also a huge turnaround from SurveyUSA’s previous poll, which named just seven candidates and found little-known Democrat Kevin Paffrath leading Elder 27-23. However, Paffrath was the only Democrat on that abbreviated ballot. This time, when facing the entire field, he gets just 6%.

Meanwhile, Elder’s newest ad features a cross-party endorsement from former Democratic state Senate Majority Leader Gloria Romero, who declares, “I believe in charter schools and school choice. So does Larry Elder. But not Gavin Newsom.” Romero was last on the ballot in 2010 when she took a close third place in the crowded nonpartisan primary for state superintendent of public instruction; she went on to lead the state branch of the organization Democrats for Education Reform, an anti-teachers union outfit.

But today, we have good evidence to suggest it’s flipped–that it’s now the GOP that needs to go the extra yard to win over lower-propensity voters in the most crucial swing states and districts.

Monmouth University’s latest polling in Virginia provides a small but crucial data point. Former Virginia Gov. Terry McAuliffe (D)’s lead over Republican nominee Glenn Youngkin (R) actually goes down when respondents who have voted infrequently since 2016 are included. Indeed, this trend matches with what we saw in 2020, when polls regularly overstated Joe Biden’s leads in the closest swing states by failing to capture these lower-propensity voters.

Obviously, that could just be a remnant of the Trump era, when places like Virginia saw their Democratic “low-propensity” voters turn into “regular” voters. Things could return to earth now that he’s out of office. But we haven’t seen much to suggest things are shifting back. If anything, data from the Census suggests these coalition changes are speeding up. Population growth and economic power are gravitating away from rural America, meaning Republicans will have to dig deeper for their votes. That could mean a bumpy road for our politics, but a smoother path for Democrats.

MISSOURI 7TH CD — State Sen. Mike Moon announced this week that he would seek the Republican nod to succeed incumbent Billy Long, who is giving up this safely red southwest Missouri seat to run for the Senate. Moon competed in the 2010 GOP primary when the previous version of this seat was open and took just 4% of the vote in a race Long won with 37%; two years later, Moon again decided to square off against Long, but the freshman congressman beat him 60-22. Those scalding defeats were by no means the end of Moon’s political career, though, as he won a 2013 special election to the state House and a promotion to the Senate last year.

Moon has established himself as a fervent anti-abortion crusader during his eight years in the legislature. This year, he pushed a bill that the Missouri Independent writes “would have redefined a fertilized egg as a person with all the constitutional rights of any other citizen and required police and the courts to ‘affirmatively enforce’ the Missouri constitution’s due process clause which guarantees legal rights to people, effectively turning any attempt to terminate a pregnancy into murder.”

Moon kicked off his third congressional campaign with more appeals to the far right by pledging to “punish the Chinese communists and [Anthony] Fauci for their lies about COVID.”

NEW HAMPSHIRE 1ST CD — Former TV reporter Gail Huff Brown told WMUR this week that she was considering seeking the GOP nomination to take on Democratic Rep. Chris Pappas, and an unnamed source close to her relayed that she plans to decide in the “not-too-distant future.” Huff Brown is the wife of former Massachusetts Sen. Scott Brown, who moved with her to the Granite State months after his 2012 defeat at the hands of Elizabeth Warren and went on to lose a competitive 2014 race to Democratic Sen. Jeanne Shaheen.

NEW YORK 24TH CD — Navy veteran Francis Conole announced Tuesday that he would again seek the Democratic nomination to take on GOP Rep. John Katko in what is currently a competitive Syracuse-based seat. Conole campaigned for the nomination last year but lost the primary to 2018 nominee Dana Balter by a wide 63-37 margin. Katko went on to turn back Balter 53-43 even as Joe Biden was taking the seat 53-44, but he infuriated his party base months later by voting to impeach Donald Trump, who said in June that he’d help support a challenge to the incumbent in next year’s primary. Making Katko’s future even more uncertain, Democrats in the legislature could make his district bluer.

TEXAS 15TH CD — On Tuesday, House Minority Leader Kevin McCarthy threw his backing behind 2020 nominee Monica De La Cruz-Hernandez, who is making a second run at Democratic incumbent Vicente Gonzalez. De La Cruz-Hernandez, who lost that campaign by a shockingly close 51-48 margin, has yet to attract any serious primary opposition in a Rio Grande Valley constituency that the GOP will have the opportunity to gerrymander.

Mother Jones notes that two-thirds of all Facebook users who join extremist groups are actually guided to them by Facebook itself.

Politico: “With two weeks of early voting left before the California recall election, Democrats are tracking a worrisome sign for Gov. Gavin Newsom and the party at large — the governor’s relative weakness with Latinos.”

“If the trend holds, with even a small segment of the Latino electorate embracing the GOP, it may spell disaster for the Democratic Party — and not just in California this year. The party in power typically suffers losses in midterm elections, and Democrats will need a robust Latino turnout in 2022 to protect its narrow majorities in Congress.”

“In an ominous sign, Democratic gubernatorial candidate and former Gov. Terry McAuliffe is running far behind Biden’s numbers with Hispanic voters this year in Virginia.”

“Copies of the Dominion Voting Systems software used to manage elections — from designing ballots to configuring voting machines and tallying results — were distributed at an event this month in South Dakota organized by MyPillow CEO Mike Lindell.”

“Release of the software copies essentially provides a blueprint for those trying to interfere with how elections are run. They could sabotage the system, alter the ballot design or even try to change results.”

New York state Sen. Liz Krueger (D) is urging campaign donors to former Gov. Andrew Cuomo (D) “to ask for their money back and also questioning the legality of the governor’s post-resignation use of the account,” the Albany Times Union reports.

Krueger said “the use of the fund to fuel any ‘desire for revenge’ by Cuomo is not a permitted campaign expenditure. She asserted that the $18.3 million in his campaign account for governor is being used to ‘lie about and attack his perceived enemies.’”