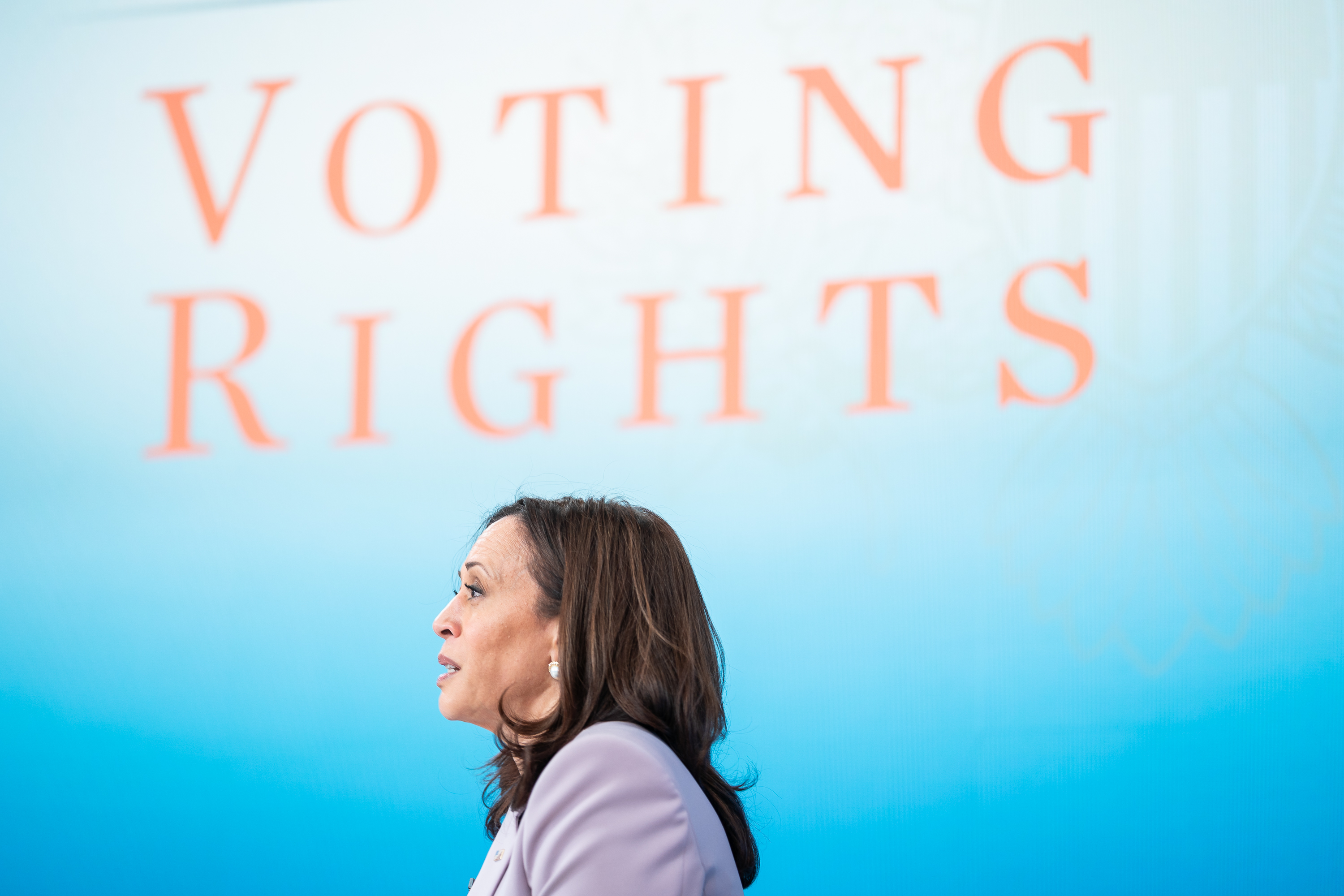 A new Monmouth poll in Virginia finds Terry McAuliffe (D) leading Glenn Youngkin (R) in the race for governor, 47% to 42%.

“A range of potential electorate scenarios show McAuliffe with a lead ranging from 2 points to 7 points depending on the model. Youngkin does better when more low-propensity voters are included in the mix.”

“Specifically, McAuliffe has a fairly comfortable lead among voters who have cast ballots in every general election since 2016 (52% to 41%) while those who voted in only 2 or 3 elections during that time are evenly split (42% for Youngkin and 41% for McAuliffe).”

A new Axios-Ipsos poll finds vaccine hesitancy in the U.S. is showing signs of crumbling.

“Fewer adults than ever now say they won’t take the shot, and in the past two weeks there has been a sharp increase in the share of parents who plan to get their younger kids vaccinated as soon as it’s allowed.”

Pew Research: “In just five years, the percentage of Republicans with at least some trust in national news organizations has been cut in half – dropping from 70% in 2016 to 35% this year. This decline is fueling the continued widening of the partisan gap in trust of the media.”

This chart from FiveThirtyEight shows how Democratic House members are much more united behind President Biden’s agenda than Republicans are in opposing it:

It’s the same story in the Senate:

CALIFORNIA GOVERNOR — With the Sept. 14 recall election of Gov. Gavin Newsom looking close in most polls, the Democratic Governors Association is contributing another $3 million to Newsom’s cause. As analyst Rob Pyers of the California Target Book notes, that sum comes on top of the $1.5 million the DGA has already given and makes the group “the largest single contributor” to Newsom’s campaign committee, which has brought in $62 million to date.

One new poll, though, is at odds with previous data: Democratic pollster Change Research, in a survey it says it conducted in-house, sees the recall failing by a 57-42 margin among those who say they’re likely to vote or already have. That’s by far the most favorable finding for Newsom among likely voters since before the summer. The survey also finds conservative radio host Larry Elder taking 27% on the replacement question, with his nearest opponent, Democrat Kevin Paffrath, far back at 6.

The GOP firm Medium Buying says that Democratic Gov. Gavin Newsom is spending $6.3 million on TV and radio ads for the final two weeks heading into the Sept. 14 recall. Newsom’s campaign is also up with two new commercials: One stars Vermont Sen. Bernie Sanders denouncing the recall as “a bold-faced Republican power-grab,” while the other features a narrator arguing, “If you don’t vote, we could have an anti-vax Republican governor of California.”

“I hope to live to see the day when you become president.”  — California gubernatorial candidate Larry Elder (R), quoted by the Los Angeles Times in an email to Trump aide Stephen Miller in 2016.

SOUTH DAKOTA AT LARGE CD — State Rep. Taffy Howard, who’s been considering a primary challenge to Republican Rep. Dusty Johnson, is “likely to make an official announcement in the coming weeks,” according to KYNT. While Howard hasn’t been particularly specific in her criticisms of the incumbent, she’s a vocal advocate of conspiracy theories about the 2020 election and has suggested that Johnson hasn’t fought vigorously enough to stamp out “fraud.”

HAWAII GOVERNOR — Vicky Cayetano (D), wife of former two-term Democratic Gov. Ben Cayetano (D), announced that she will run for the Democratic nomination for governor even though she was once a Republican, the Honolulu Civil Beat reports.

“But as Budd has told his narrative in a state where agriculture is the largest business, he omitted a key chapter. He made no mention of his role in his family’s calamitous involvement in a company called AgriBioTech, which ended in a bankruptcy case that cost farmers millions of dollars in losses.”

“A trustee for farmers and other creditors alleged that his father, Richard Budd, improperly transferred millions of dollars in assets to his family, including Ted Budd. That occurred before Richard Budd and a family company faced a $15 million judgment in the case. Moreover, the trustee alleged, Ted Budd ‘acted in concert’ with his father ‘in connection with the fraudulent transfers.’”

KANSAS GOVERNOR — Next year’s Republican primary for governor in Kansas took a truly unexpected turn on Monday when former Gov. Jeff Colyer announced that he was dropping out due to a recent diagnosis of prostate cancer. Colyer also endorsed Attorney General Derek Schmidt, who is now the only notable Republican challenging Democratic incumbent Laura Kelly.

Colyer’s decision came as an especially big jolt because he’d spent years laying the groundwork to return to the office he lost in 2018 after then-Kansas Secretary of State Kris Kobach beat him in the primary by all of 343 votes. Schmidt, though, was in no mood to defer to Colyer, who had been elevated from lieutenant governor to governor only about six months before his defeat, and it appeared that Team Red was in for a nasty nominating battle. Indeed, Colyer welcomed the attorney general to the race by reminding voters that Schmidt had once worked for a pair of former GOP senators, Kansas’ Nancy Kassebaum and Nebraska’s Chuck Hagel, who have since turned on the party and supported Democrats like Kelly and Joe Biden.

It remains to be seen whether Colyer’s departure will incentivize any other prominent Republicans to join the race, or whether Schmidt will now have an easy path to the GOP nod to face Kelly, who is the only Democratic governor up for re-election in a state that Donald Trump carried in 2020. Before Monday, though, there was just one potential entrant waiting in the wings: As recently as June, the Topeka Capital-Journal listed wealthy businessman Wink Hartman, who was the 2018 Republican nominee for lieutenant governor on Kobach’s ticket, as someone who was “said to be weighing a bid.” However, we’ve heard nothing new from Hartman since then.

Trump’s super PAC, meanwhile, has been trying to entice Perdue to challenge Gov. Brian Kemp in next year’s primary instead, an idea the former senator has yet to publicly address. The Republicans who spoke to Drucker doubt such a bid will come to pass, however, with one insider saying of Perdue, “When I talk to him, he was more inclined to run for Senate than to take on an incumbent Republican governor.”

If Perdue does surprise everyone and challenge Kemp, though, he’d need to do it without the support of his prominent cousin: Former Gov. Sonny Perdue, who later went on to serve as Trump’s secretary of agriculture, endorsed the incumbent on Saturday at a party gathering.

OHIO U.S. SENATOR — Insider reported Sunday that the nonprofit that venture capitalist J.D. Vance set up with great fanfare a few years ago appears to have done little to nothing during its existence.

Vance, the Hillbilly Elegy author who is now seeking the GOP nomination for Ohio’s open Senate seat, announced in 2017 that he was launching Our Ohio Renewal, a charity whose stated purpose included “fighting against opiate abuse” in the state. Insider, though, reviewed the group’s first year of tax filings and found that it “spent more on ‘management services’ provided by its executive director — who also serves as Vance’s top political advisor — than it did on programs to fight opioid abuse.”

Why only look at one year of filings, though? Insider explains, “The nonprofit raised so little in each of the last three years — less than $50,000 a year — that it wasn’t even required by the IRS to disclose its activities and finances.” Our Ohio Renewal’s website no longer exists, while its Twitter account has posted just twice ever, both times in 2018. The spokesperson for the state’s largest anti-opioid umbrella group, the Ohio Opioid Education Alliance, adds that she’d never even heard of Vance’s organization.

COLORADO — Associated Press: “The Colorado secretary of state sued Monday to remove a rural county’s election clerk who is accused of allowing a security breach of voting equipment that the FBI also is investigating.”

“An initial investigation shows images of election management software were obtained by conspiracy theorists and posted on far-right blogs.”

MINNESOTA GOVERNOR — An unnamed source close to state Sen. Michelle Benson tells the Minnesota Reformer that they expect her to announce this week that she’ll seek the GOP nod to take on Democratic Gov. Tim Walz, naming Wednesday as a possible date.

FLORIDA 26TH and 27TH CDs — Former Rep. Debbie Mucarsel-Powell, who reportedly had not ruled out a comeback bid, recently confirmed she’s considering a campaign to the Miami Herald, saying she might seek a rematch with GOP Rep. Carlos Gimenez in the 26th District or take on Republican incumbent María Elvira Salazar in the neighboring 27th. Said Mucarsel-Powell, “I’m evaluating what is the best way for me to make a positive impact for people living in the state of Florida and at this point I haven’t made a decision.”

Redistricting, though, could result in Mucarsel-Powell winding up in a Democratic primary against fellow former Rep. Donna Shalala, who previously said she’d decide in October whether she’d run against Salazar again. With this prospect in mind, an unnamed group commissioned a late August poll from Public Policy Polling that finds Shalala leading her ex-colleague 28-20 in the current boundaries of the 27th District, where Shalala lost re-election last year. The survey also tested Miami Beach commissioner David Richardson, who takes 7%, while healthcare business owner Janelle Perez, who is currently Salazar’s only announced foe, gets just 4%.

Richardson, though, sounds very unlikely to run for Congress. He told the paper that, while he’d thought about taking on Salazar, he “pretty much decided I wasn’t going to run because there’s so much uncertainty about redistricting.” The commissioner added, “One thing I’ve learned in this process is never say never, but I can say I have no plans for running.”

NEW HAMPSHIRE 1ST CD — Former Trump aide Matt Mowers announced Monday that he would seek a rematch against Democratic Rep. Chris Pappas in what has long been a swing seat in the eastern half of the state. A few other Republicans are already running, though more might take an interest in the race if a new GOP gerrymander makes this district redder.

Mowers raised a solid $1.7 million during his 2020 campaign, but he appeared to be the decided longshot heading into Election Day. While the 1st had supported Donald Trump 48-47 in 2016, polls showed Joe Biden in strong shape in New Hampshire. Even more tellingly, no outside groups on either side spent any serious money in the congressional contest, which was a strong indication that both parties believed Pappas was secure. The final result, though, was closer than almost anyone expected, with the incumbent turning back Mowers 51-46 as Biden prevailed 52-46.