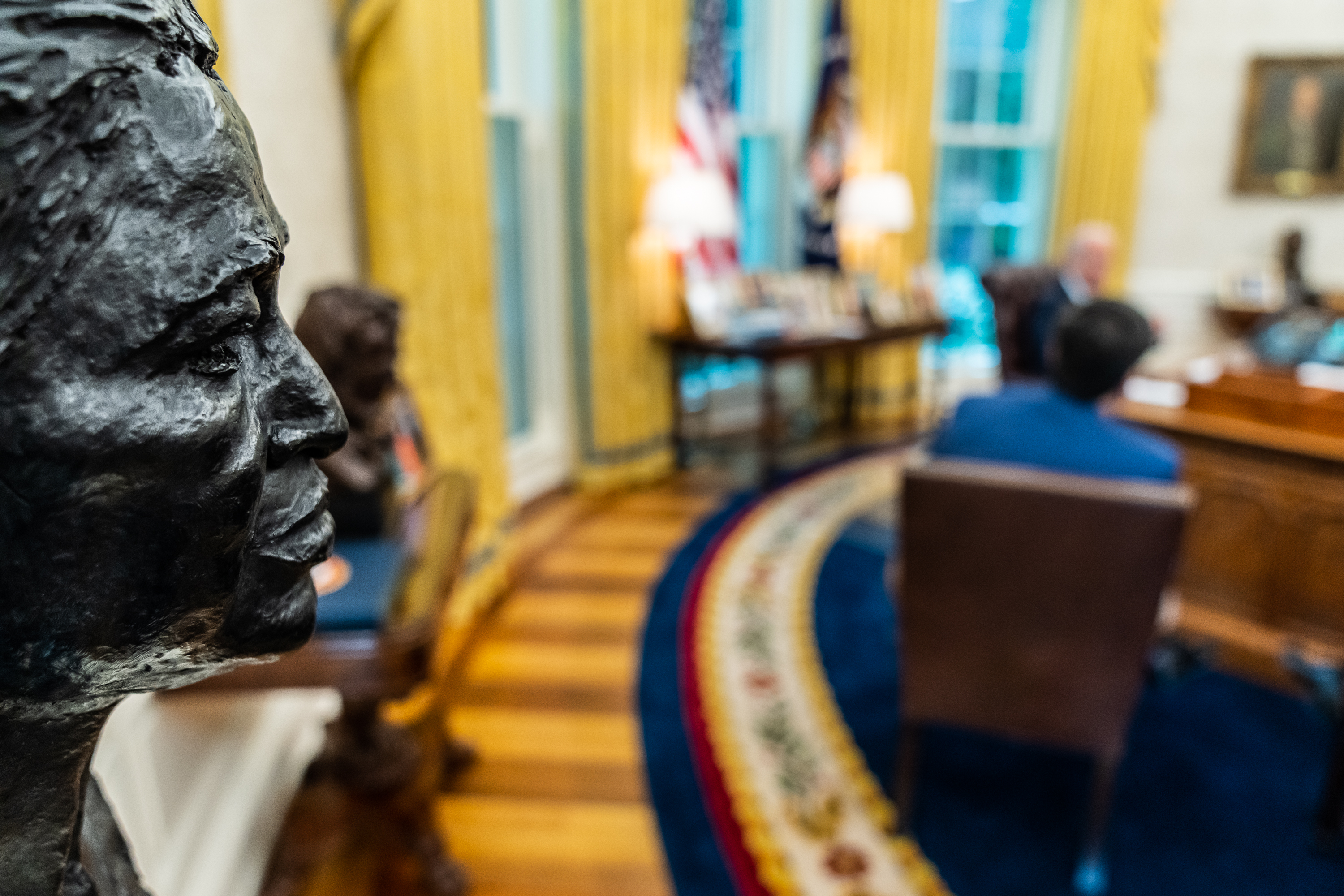 Axios: “If the states are found to have discriminated against students with disabilities, the Biden administration could issue sanctions that include loss of federal funding.”

Taliban guard at Kabul airport says last American planes have flown out after two decades of war, the AP reports.

The FAA confirms: “Effective immediately Hamid Karzai International Airport is uncontrolled. No air traffic control or airport services are available. Aircraft operating into, out of, or through Kabul should use extreme caution.”

“The United States and 97 other countries said on Sunday that they would continue to take in people fleeing Afghanistan after the American military departs next week and had secured an agreement with the Taliban to allow safe passage for those who are leaving,” the New York Times reports.

“Rocket fire apparently targeting Kabul’s international airport struck a nearby neighborhood on Monday, the eve of the deadline for American troops to withdraw from the country’s longest war after the Taliban takeover of Afghanistan,” the AP reports. “It wasn’t immediately clear if anyone was hurt.”

“Hundreds of Afghans protested outside a bank in Kabul on Saturday and others formed long lines at cash machines as a U.N. agency warned that a worsening drought could leave millions in need of humanitarian aid,” the AP reports.

“With U.S. troops departing Afghanistan after 20 years, it’s now time for the Taliban to decide how it intends to run the country — and for the U.S. to decide how to work with that government,” Axios reports.

“The militants are offering vague assurances that they have changed with the times, while foreign powers are assessing what leverage they have to hold the insurgents-turned-rulers to those promises.”

“Speaking from a secure video conference room on the third floor of the Pentagon at 8 a.m. Wednesday — or 4:30 p.m. in Kabul — Defense Secretary Lloyd Austin instructed more than a dozen of the department’s top leaders around the world to make preparations for an imminent ‘mass casualty event.’”

“The panel is asking all of the companies to explain whether their algorithms helped spread misinformation and account for what they did to address or remove content or posts that might have spread falsehoods about the riot. It also requests information on the companies’ communications with law enforcement regarding Jan. 6 and the election, as well as on their reporting practices.”

Pastor Daniel Darling, the spokesman for a major evangelical nonprofit, was fired for promoting vaccines on the “Morning Joe” cable news show, Religion News Service reports. Darling was told he could sign a statement admitting he had been insubordinate, and admit that his pro-vaccine statements were wrong, or be fired.

Los Angeles Times: “In the three weeks since the annual rally kicked off, coronavirus cases in South Dakota have shot up at a startling pace — six-fold from the early days of August.”

“A California psychiatrist who has advised Gov. Ron DeSantis (R) on the coronavirus pandemic recently promoted a drug for COVID-19 patients that federal disease experts have strongly warned against after a spike in calls to poison control centers,” the Miami Herald reports.

“The surge of interest in the parasite drug, ivermectin, prompted the Centers for Disease Control and Prevention on Thursday to issue a national alert advising against its use to treat coronavirus.”

“An unvaccinated elementary school teacher in California infected more than half of their students with COVID-19, ultimately resulting in a community-wide outbreak in Marin County,” Axios reports.

“The outbreak, which took place in May, highlights the stakes surrounding a debate across the U.S. among school districts considering implementing stricter measures to curb the spread of the virus, like universal masking in schools.”

“Caleb Wallace, a leader of the anti-mask movement in Texas who became infected with the coronavirus and spent three weeks in an intensive care unit, has died,” the New York Times reports.

“Robert David Steele, a former CIA officer turned conspiracy theorist who claimed to be the first person to call COVID-19 a hoax, has died from COVID-19,” Vice News reports.

“Steele, who was among the earliest QAnon promoters and helped the conspiracy theory move from the fringes of the internet into the mainstream, was hospitalized with symptoms of COVID-19 earlier this month. But he continued to spread anti-vaccine and COVID-denial conspiracy theories until the end.”

At GOP event in North Carolina, Rep. Madison Cawthorn (R-NC) called the January 6 Capitol rioters “political hostages” and spoke of trying to “bust them out.”

When asked when he was going to “call us to Washington again” over the “stolen election,” Cawthorn responded: “We are actively working on that one. We have a few plans in motion that we can’t make public right now.”

He then encouraged attendees to engage in “a little civil disobedience.”

“President Biden on Friday announced all federal civilian employees would receive an average 2.7 percent pay raise, consistent with the increases he had proposed in his 2022 budget,” the Washington Post reports.

Washington Post: “In private discussions, some House Democrats have raised the prospect of whether Secretary of State Antony Blinken and national security adviser Jake Sullivan — two of Biden’s most trusted aides — should lose their jobs.”

Both men appeared on the Sunday shows and Playbook says “it wasn’t pretty.”

“Vulnerable House and Senate Democrats are distancing themselves from President Biden over Afghanistan, with one calling the evacuation ‘egregiously mishandled,’” Axios reports. “Biden’s poll numbers have fallen as the Delta variant spread and the Afghanistan exit proved harrowing. Now, some Democrats in swing states and districts are publicly distancing themselves.”

Washington Post: “Republicans have been laying a foundation for a midterm argument rooted in casting Biden as a weak leader who has lost control of a swirl of crises, from the surge in migrants at the southern border to a rise in violent crime and now the situation in Afghanistan.”

Whatever its merits, the message does unite the Mitch McConnell and Donald Trump sides of the party.

Politico: “An increasingly vocal group of Republicans — led by Donald Trump, who made immigration restrictions a hallmark of his presidency — oppose the resettlement of Afghan refugees in the U.S., claiming that they could be dangerous, or will change the make-up of the country.”

“And they plan to make it an issue in next year’s midterm elections, along with broader attacks about Biden’s messy withdrawal from Afghanistan.”

“The European Union recommended halting nonessential travel from the U.S. because of the rise of Covid-19 cases, ending a summer-vacation reprieve for American tourists,” the Wall Street Journal reports.

“The decision came amid the growing spread of the Delta variant in the U.S., where vaccination rates have also now fallen behind the average rates of shots in EU countries.”

“European officials have been considering the move for much of the last month, with the average U.S. infection rate now above that of the EU.”

New York Times: “Starting Monday, the officials said, the U.S. will be removed from a ‘safe list’ of countries whose residents can travel to the 27-nation bloc without additional restrictions, such as quarantine and testing requirements.”

Politico: “Senate Republicans are digging in deeper and deeper in their resistance to raising the nation’s borrowing limit, with 46 of them vowing to oppose an increase this fall that will need at least 10 Republican votes. Yet Democrats still plan to burn their most expedient ticket out of the debt mess, with no intention to shift course and pass an increase along party lines.”

“Their move to pass a budget resolution without tackling the debt ceiling, completed last week, adds a perilous deadline to Democrats’ season full of lofty promises on infrastructure and social spending. It’s not only the majority party facing a fall challenge, however: Republicans will have to actually block a debt ceiling increase instead of just talking about it.”

“Washington’s state employee union is asking a court this week to delay implementation of Gov. Jay Inslee’s COVID-19 vaccine mandate, arguing it should not move forward until its full impacts have been adequately negotiated,” the Seattle Times reports.

An Ohio judge ruled in favor of a woman last week who sought to force a hospital to administer Ivermectin — an animal dewormer that federal regulators have warned against using in COVID-19 patients — to her husband after several weeks in the ICU with the disease, the Ohio Capital Journal reports.

“China has a new rule for the country’s hundreds of millions of young gamers: No videogames during the school week, and one hour a day on Fridays, weekends and public holidays,” the Wall Street Journal reports.

“China on Monday issued strict new measures aimed at curbing what authorities describe as youth videogame addiction, which they blame for a host of societal ills, including distracting young people from school and family responsibilities.”