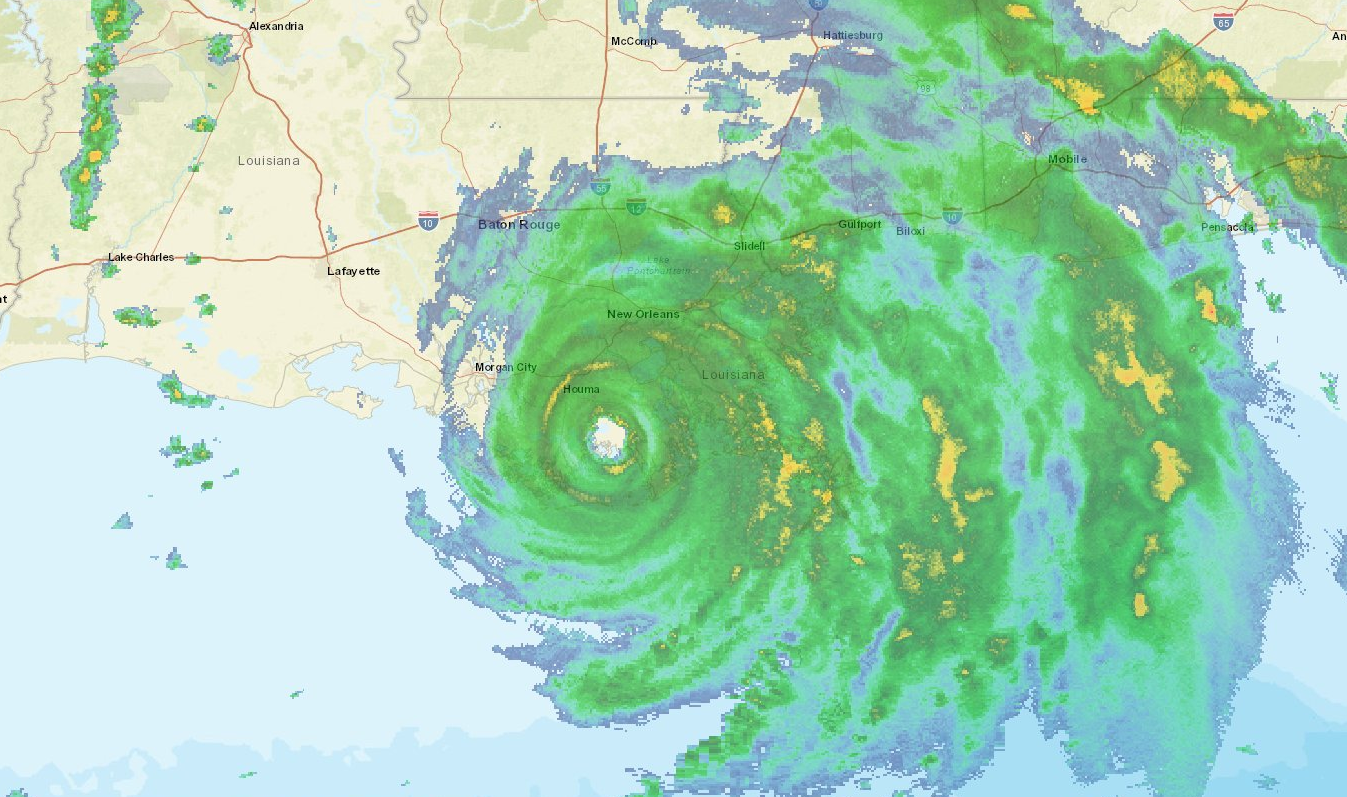 “Hurricane Ida explosively intensified overnight into a high-end Category 4 storm, and is bringing ‘catastrophic effects’ to Louisiana as it gears up to be one of the strongest hurricanes to make landfall in the state’s recorded history,” Axios reports.

“Maximum sustained winds were measured by aircraft to be 150 mph, just shy of Category 5 intensity.”

Louisiana Gov. John Bel Edwards (D) told CNN that Ida “will be one of the strongest hurricanes that hit anywhere in Louisiana since at least the 1850s,”

“The U.S. military carried out a strike on a vehicle in Kabul on Sunday in response to an ‘imminent’ threat to the Afghan capital’s airport by the Islamic State militant group,” the Washington Post reports.

“The U.S. military official said there were ‘significant secondary explosions’ following the Sunday strike, indicating the presence of a ‘substantial amount of explosive material.’”

CNN: “Biden’s national security team had little time to emotionally process the attacks, one official said, as they remained focused both on the airlift mission in Kabul, now entering its most dangerous phase yet, and a new objective to take out the terrorists.”

“For a commander-in-chief known to occasionally flash his temper, multiple aides who spoke to CNN described Biden as consistently calm and level-headed in the aftermath of the attack. Still, by the time Biden emerged into the White House East Room after most of Thursday behind closed doors, the strain of the moment was evident.”

Washington Post: “President Biden is planning to withdraw the U.S. ambassador and all diplomatic staff in Afghanistan by Tuesday, and it is unclear when — or if — they might return to the country.”

“Despite the Taliban’s expressed interest in having the United States maintain a diplomatic mission in Kabul, the Biden administration has not made a final decision about what a future presence might look like.”

A Taliban official said on Sunday that they are waiting for a sign from the U.S. military ahead of what they predict will be a swift handover of the Kabul airport, Reuters reports.

New York Times: “The Florida story is a cautionary tale for dealing with the current incarnation of the coronavirus. The United States has used the vaccines as its primary pandemic weapon. But Florida shows that even a state that made a major push for vaccinations — Florida ranks 21st among states and Washington, D.C., in giving people of all ages at least one shot — can be crushed by the Delta variant, reaching frightening levels of hospitalizations and deaths.”

“Florida’s pandemic data, more scant since the state ended its declared Covid-19 state of emergency in June, reveals only limited information about who is dying. Hospitals have said upward of 90 percent of their patients have been unvaccinated. Exactly why the state has been so hard-hit remains an elusive question. Other states with comparable vaccine coverage have a small fraction of Florida’s hospitalization rate. The best explanation of what has happened is that Florida’s vaccination rates were good, but not good enough for its demographics.”

“Covid-19 hospitalizations nationwide crossed above 100,000 this week for the second time in the pandemic, overwhelming caregiver capacity in several states,” the Wall Street Journal reports.

“Keeping ahead of demand is harder now than during earlier surges, according to doctors, nurses and hospital executives. Patients with other illnesses returned to hospitals this year, leaving fewer open beds as Covid-19 cases soared. The demand is most acute in ICUs, which care for the most-critical patients and need highly trained medical staff. Hospitals are short-staffed and unable to recruit enough nurses and respiratory therapists, who are exhausted as the pandemic wears on.”

Charlie Sykes: “About a week after testing positive for Covid-19 himself, Texas Gov. Greg Abbott issued an executive order banning the use of vaccine mandates in the public sector and for businesses that contract with the state.”

“The Republican’s guidance was sweeping — overriding both local control and private sector rights.”

“So much for limited government, property rights, or conservative principles. Abbott’s order was also a revealing indication of how the GOP now defines freedom.”

Playbook: We know that Donald Trump and Rep. Jim Jordan (R-OH) spoke once on the day of the Capitol riot, but the Ohio Republican has said he doesn’t remember when their conversation took place. We have some new details that could help clear up that timeframe — including confirmation of at least one more phone conversation between Jordan and the then-president during the siege.”

“After a group of lawmakers were evacuated from the House chamber to a safe room on Jan. 6, Jordan was joined by Rep. Matt Gaetz (R-FL) for a call during which they implored Trump to tell his supporters to stand down, per a source with knowledge of that call. The source declined to say how Trump responded to this request.”

“Jordan has previously disclosed that he spoke to Trump on Jan. 6, but not the existence of more than one call on the day — a rare piece of new information on the former president’s moves during the riot at a time when House Republicans are loath to discuss such specifics.”

Perry Bacon: “The Biden team should govern competently — and also fight on more polarized issues … instead of trying to dodge them. Biden can’t unilaterally end the partisan ‘uncivil war,’ no matter how hard he tries, because the Republicans are so deeply committed to it. Biden’s strategy implies there are ‘culture war’ issues to avoid and ‘pocketbook’ issues to focus on.”

“In reality, Republicans push almost every issue, from vaccinations to unemployment benefits to voting rights, into the broader, zero-sum fight between the parties. So conservative activists and politicians are opposing mask-wearing in schools just as fervently as they oppose the teaching of critical race theory.”

Bloomberg: “For the head of a hospital facing yet another wave of Covid, a vaccine mandate might seem like the only way to keep staff and patients safe. The reality is more complicated, though. Right now nearly 1 in 8 nurses are neither vaccinated nor planning to get a shot.”

“And in some parts of the country, hospital administrators say only about half of their nursing staff are vaccinated.”

“That’s the dilemma. Do you lose more nurses by mandating vaccines and having some quit, or by not requiring shots and facing staff shortages from quarantines and absences when they get sick?”

Hospitals in the Southeast are running low on oxygen, with the worst-hit left only 12 to 24 hours worth, Bloomberg reports.

Axios: “Web traffic, social engagement and TV ratings for conservative outlets are booming in response to the ongoing crisis in Afghanistan.” ”Conservative news sites had been declining for months following the Capitol siege.”

Former Trump aide Michael Caputo, who left the administration in the fall of 2020 to battle cancer, is profiled by Politico:

“A bit more than six months shy of 60 years old, Caputo is not who he used to be — and it’s not just because he’s significantly thinner and remains physically weakened from punishing rounds of radiation. He’s not who he used to be, and can’t be, he has told me repeatedly, because he’s convinced that doing what he was doing — trafficking in the social media acidity and angry, slash-and-burn politics that have come to define this disquieting and unsettled American moment — is what almost killed him, not metaphorically but literally, as specific and causal as cigarettes and lung disease.”

Said Caputo: “I think I finally understand after… everything. There’s much more to life.”

Washington Post: “The clock is now ticking for millions of Americans who are set to face a series of stinging financial hardships in a matter of days, with the loss of federal protections against eviction and looming cuts to their weekly unemployment checks…”

“The developments portend a potential shock to the economy, and they highlight the difficult political realities even in Democratic-dominated Washington. Biden has only so much power to act on his own to provide pandemic relief, and lawmakers in his party do not always see eye to eye about the need for additional economic stimulus.”

“Caught in the middle are millions of Americans who have relied on these generous but temporary federal programs to pay their bills since the coronavirus first swept the nation in March 2020. With fewer federal protections at their disposal, the financial hardships they face may only intensify, especially as new variants threaten to shutter businesses and schools — and overrun hospitals with patients — in communities already ravaged by the pandemic.”