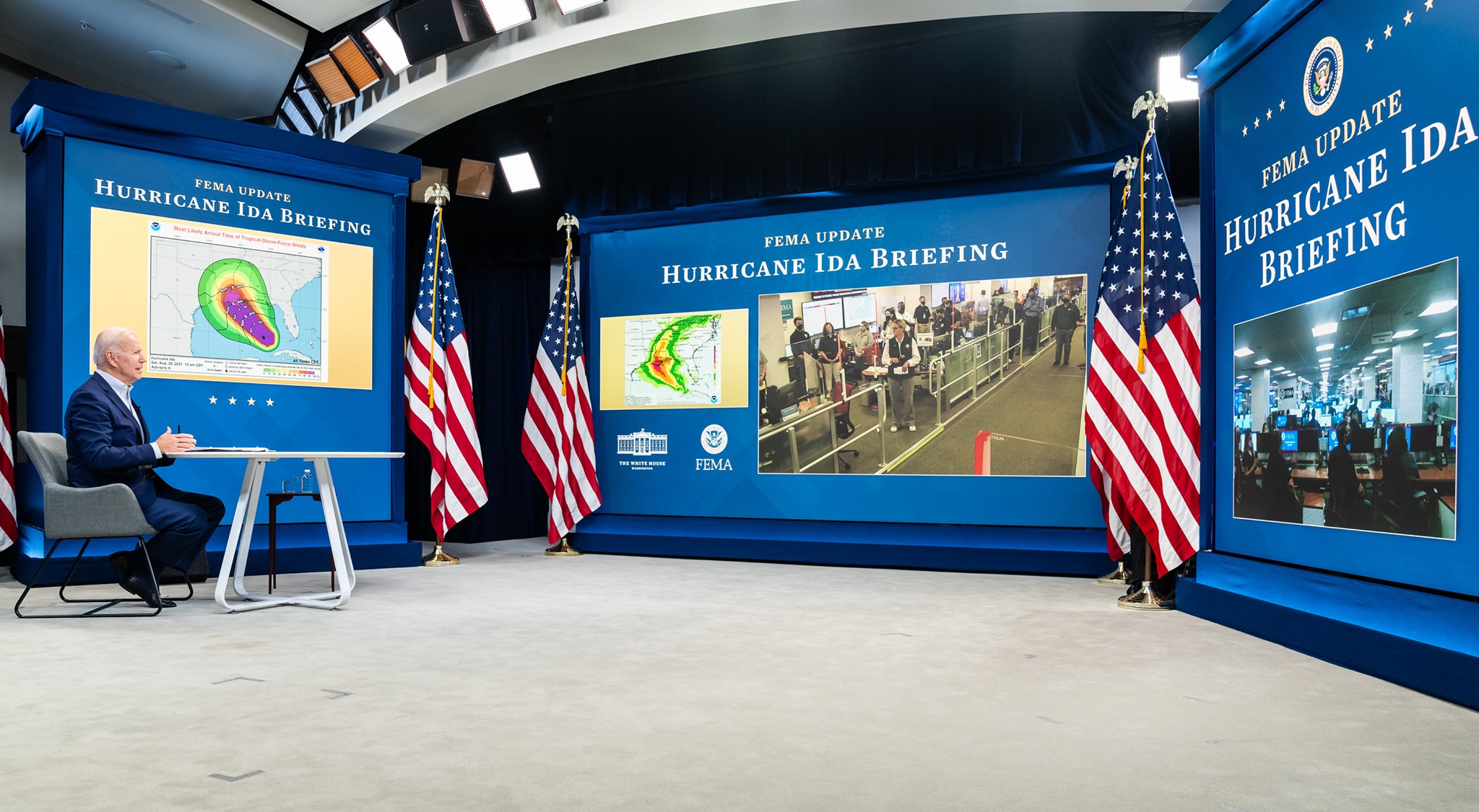 “President Biden warned Saturday that another terrorist attack at the Kabul airport sometime in the coming days was ‘highly likely,’ and he promised that the U.S. retaliatory strike for Thursday’s suicide attack would not be the last,” the New York Times reports.

“The warning was yet another sign of the chaotic and dangerous situation as the U.S. tried to pull the last remaining Americans and Afghans out of a Taliban-controlled Afghanistan before the Tuesday deadline.”

Hours after President Biden warned of a potential attack at the Kabul airport, the U.S. Embassy in Afghanistan alerted American citizens in the vicinity of the airport to evacuate because of “a specific, credible threat,” the Washington Post reports.

U.S. forces in Kabul are preparing for further Islamic State terrorist attacks, which may include the use of car bombs, or rockets being fired at the capital’s airport, as the evacuation effort in Afghanistan nears its Aug. 31 deadline, the Washington Post reports.

“The Pentagon said Saturday that the U.S. military strike the day before killed two ‘high-profile’ ISIS targets and wounded a third, in the first known U.S. military action since Thursday’s deadly suicide bombing at the Kabul airport,” The Hill reports.

The Washington Post reviewed dozens of photos and videos, analyzed satellite imagery and spoke to witnesses to understand the events before and after the blast that killed 13 American service members and at least 170 other people in Afghanistan.

“Taliban forces sealed off Kabul’s airport Saturday to most Afghans hoping for evacuation and most NATO nations flew out their troops after two decades in Afghanistan, winding down a frantic airlift that Western leaders acknowledged was still leaving many of their citizens and local allies behind,” the AP reports.

“The United States, which says the round-the-clock flights have evacuated more than 100,000 people since the Taliban claimed Kabul on Aug. 15, was keeping up airlifts ahead of President Joe Biden’s Tuesday deadline for withdrawal.”

Rep. Elise Slotkin (D-MI) announced that her office helped evacuate 114 Afghan nationals out of Kabul and to safety.

“Hurricane Ida is rapidly gaining strength Saturday over the unusually warm waters of the Gulf of Mexico and is predicted to hit southeastern Louisiana as an ‘extremely dangerous” Category 4 storm on Sunday evening,’ Axios reports.

Today is the 16th anniversary of Hurricane Katrina’s strike.

Philip Bump: “What we can say is that on every metric except deaths, the gap between blue and red states on population-adjusted measures is wider now than it has been at any prior point in the pandemic.”

“What the above graphs also show is how deadly the virus was when it first emerged, slamming states in the vicinity of New York City in particular. Since then, we’ve learned a lot about treatment and developed new medicines, vaccines and techniques for treating the virus and slowing its spread.”

“The problem is that not all of those lessons are being heeded.”

“Kentucky and Texas joined a growing list of states that are seeing record numbers of hospitalized COVID-19 patients in a surge that is overwhelming doctors and nurses and afflicting more children,” the AP reports.

Sen. Thom Tillis (R-NC) told a conservative local business group that anti-pandemic measures should focus on getting North Carolinians vaccinated, not on migrants at the U.S.-Mexico border, the Asheville Citizen Times reports.

President Biden told reporters in the Oval Office that he talked with Dr. Anthony Fauci today about the prospect of giving vaccine booster shots after five months instead of eight, Politico reports.

Some good news: “CDC Director Rochelle Walensky said the seven-day average of new cases is up 3% week over week — that’s down from a 12% growth rate just a few days ago. Perhaps the peak of the country’s Delta variant surge is in sight.”

“The U.S. intelligence community has ruled out the possibility that the novel coronavirus that has killed more than 4 million people globally was developed as a bioweapon by China, but the agencies failed to reach consensus on the virus origin,” the Washington Post reports.

“The report, the result of a 90-day sprint ordered by Biden, also found that the agencies are unlikely to reach a conclusion about the virus’s origins without cooperation from the Chinese government, which is unlikely.”

David Ignatius: “The catastrophe in Kabul has spawned some finger-pointing and second-guessing in what has been a congenial Biden administration. To some White House officials, the military followed Biden’s order to withdraw troops all too quickly, with its commander and most forces gone by early July.”

“The Pentagon counters that the timetable was explicitly endorsed by the White House. Officials across the government complain that the State Department failed to reduce staffing at the embassy soon enough or to prepare visa paperwork for the thousands of Afghan civilians who would need to be evacuated if Kabul fell. And while the CIA warned that the Afghan government was shaky, even pessimists thought it might not fall until October or November.”

“Biden sought to calm that discord Thursday with an embrace of a military that is grieving. But rest assured: When the histories are written, there will be enough blame for all to share. For today, too much sorrow.”

David Von Drehle: “Biden inherited the strongest Taliban and the smallest U.S. force in the war’s history. That was a very poor hand to play. That he has played his poor hand so poorly is now part of his presidential legacy…”“Biden owns this, just as Bush owned the accumulated intelligence failures that led to 9/11; just as Jimmy Carter owned the Iranian revolution that was 30 years in the making; just as Gerald Ford owned the last chopper out of Saigon a generation after Harry S. Truman sent the first Americans in.”

Bloomberg: “Moderate and progressive Democrats are on a collision course over how to pay for President Joe Biden’s economic agenda, a disagreement that has the potential to stall the legislation or sink it entirely.”

“Moderates want a smaller overall package of tax increases and are hesitating on some of Biden’s plans. Progressives view a total rewrite of the tax code as a moral imperative in order to fund social programs and climate measures as well as address a widening wealth gap.”

CNN: “The law, which will go into effect on August 28, ‘prohibits state and local cooperation with federal officials that attempt to enforce any laws, rules, orders, or actions that violate the Second Amendment rights of Missourians.’”

“Since the law was passed, 12 of 53 state and local officers with federal deputizations have withdrawn from ATF task forces.”

“By pulling state and local officers from the task forces, the bureau ‘is no longer able to fulfill its duties as effectively, including preventing, investigating, and assisting in the prosecution of violent offenders.’”

Despite a deadly terrorist attack by ISIS in Afghanistan yesterday, former President Donald Trump claimed in a Fox News interview that he “knocked out 100 percent of the ISIS caliphate” but that a “new ISIS” has formed: “ISIS-X.”

He added: “That’s the new ISIS-X, where they broke away — or ISIS-K. They’ll have an ISIS-X pretty soon, which is gonna be worse than ISIS-K.”

Rudy Giuliani denied having a drinking problem in an interview with NBC New York. Said Giuliani: “I’m not an alcoholic. I’m a functioning… I probably function more effectively than 90 percent of the population.”

He added: “I don’t think I’ve ever done an interview drunk. I have… sometimes… I mean, I drink normally. I like Scotch, I drink Scotch.”

A Texas judge has issued a temporary injunction order against Gov. Greg Abbott (R) and his ban on mask mandates, the Austin American Statesman reports.

According to the judge, Abbott’s ban was unlawful and exceeded his authority of the Texas Constitution.

“The judge also noted that two Florida Supreme Court decisions from 1914 and 1939 found that individual rights are limited by their impact on the rights of others. For example, he said, adults have the right to drink alcohol but not to drive drunk. There is a right to free speech, but not to harass or threaten others or yell ‘fire’ in a crowded theater.”

“Florida Gov. Ron DeSantis has been untouchable for the past year as he commanded the Republican culture wars to become heir apparent to Donald Trump. The latest coronavirus surge is starting to change that,” Politico reports.

“Covid infection rates continue to climb as the state faces shortages of health care staff, morgue space and even oxygen for patients. About 16,000 people are hospitalized. Child infection rates have shot up. School districts — even in Republican strongholds — have rebelled against DeSantis’ anti-mask mandates. And cruise lines are resisting DeSantis’ vaccine passport ban. Even his recent poll numbers are slipping.”

Former DNC Chair Howard Dean called Florida Gov. Ron DeSantis (R) a “lunatic” over his handling of the pandemic, The Hill reports. Said Dean: “I’m actually just shocked by DeSantis. I never thought I’d say this, but I think he may be more of a lunatic than Trump ever was.”

Adam Liptak: “Justice Stephen G. Breyer says he is struggling to decide when to retire from the Supreme Court and is taking account of a host of factors, including who will name his successor.”

Breyer recalled what Justice Antonin Scalia had told him: “He said, ‘I don’t want somebody appointed who will just reverse everything I’ve done for the last 25 years.’”

Liberty University announced a campus-wide quarantine on Thursday due to a surge in COVID-19 cases, The Hill reports.

“Masks and social distancing are encouraged on campus, but not required for either students or faculty. Free vaccine clinics will also be coming to the school, although the vaccine is also not required.”

Mississippi Gov. Tate Reeves (R) told attendees at a Republican Party fundraiser that Mississippians “are a little less scared” of COVID-19 than other Americans because most share Christian beliefs, the Mississippi Free Press reports. Said Reeves: “When you believe in eternal life—when you believe that living on this earth is but a blip on the screen, then you don’t have to be so scared of thing.”

Marc Bernier, a talk radio host in Daytona Beach for 30 years, died after a three-week battle with COVID-19, the Dayton Beach News-Journal reports. The Wrap notes Bernier had expressed anti-vaccine sentiment less than a week before his hospitalization.

Caleb Wallace, who organized rallies in Texas against pandemic-related restrictions, is now desperately fighting Covid-19 and on a ventilator, the San Angelo Standard-Times reports,

Jessica Wallace, who is pregnant with their fourth child, said that her husband had initially refused to get tested or seek medical care, instead opting for doses of Vitamin C, zinc, aspirin, and ivermectin.

“New research from England’s public health service has confirmed a suspicion spawned by bursting hospital wards across the United States: The Delta variant of the coronavirus not only spreads 50% more readily than the Alpha variant it rapidly overtook, it’s also making unvaccinated people sicker,” the Los Angeles Times reports.

“In addition, unvaccinated people infected with Delta were more likely than those infected with Alpha to seek care in a hospital’s emergency department.”