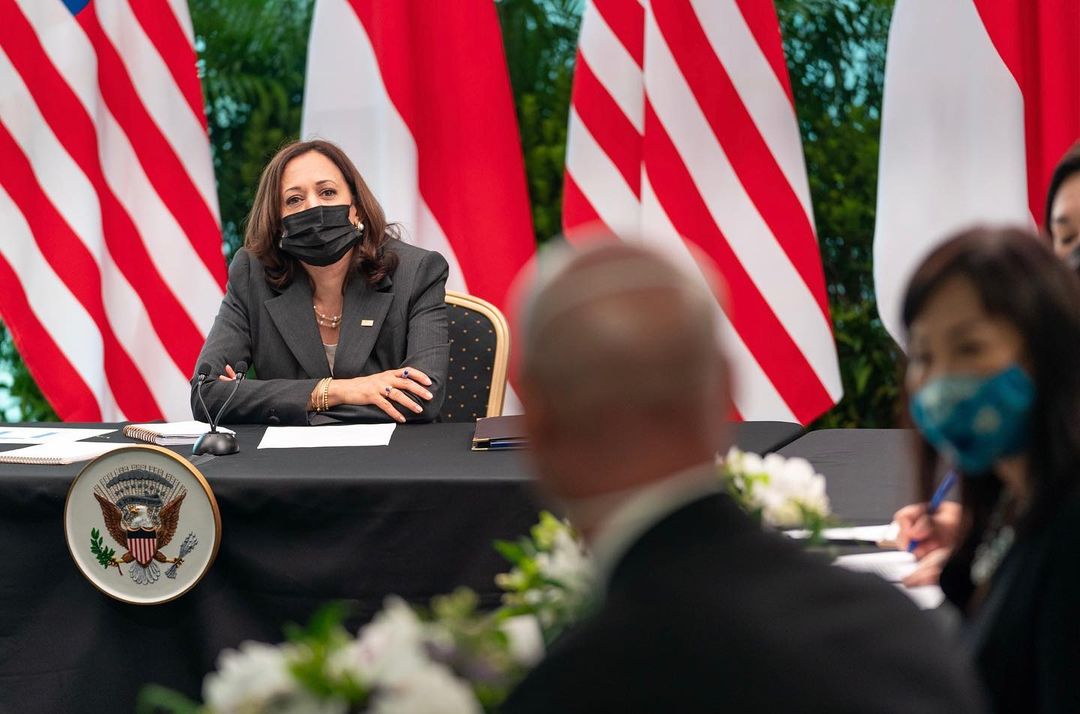 “McAuliffe leads by large margins on nearly every issue tested; and on the issue most important to voters — getting COVID-19 under control — nearly 60% of likely voters agree with McAuliffe’s positions on vaccine and mask mandates.”

Democrat Terry McAuliffe and Republican Glenn Youngkin are out with dueling TV ads that try to paint the other candidate as too extreme on the issue of reproductive rights, in very different ways.

McAuliffe’s spot attacks Youngkin for comments he made at a June campaign rally in response to a question about defunding Planned Parenthood. In a leaked recording of Youngkin responding to the question, he claimed that he would not make abortion an issue to avoid alienating moderate voters, but he added that “when I’m governor and we have a majority in the House, we can start going on offense.” Youngkin’s comments generated attention at the time, but this is the first instance of McAuliffe’s campaign seizing on the issue on the airwaves.

Youngkin’s campaign is out with a commercial in response that seeks to portray McAuliffe as “too extreme” on abortion rights by tying him to a 2019 Virginia House bill that would have eased requirements on women seeking a third-trimester abortion. Youngkin also tries to drive home his point by featuring a photo of him holding a baby in the very first frame as he recites the usual “I sponsor this ad” disclaimer.

“The selection of Mr. Benjamin, who is Black, underscored Ms. Hochul’s attempt to diversify her ticket as she mounts her first campaign for governor next year, choosing a potential running mate who could help broaden her appeal in the voter-heavy New York City region.”

Politico: “Absent an all-consuming global conflagration, voters tend to cast their ballots based on domestic rather than foreign priorities … Beyond the calendar, Republicans have other messaging bumps to overcome as they try to keep Biden’s Afghanistan problems top of mind.”

“Those include the small but vocal minority of Republicans who have stoked fears about thousands of Afghan allies being resettled across the U.S., undermining the party’s attempts at a more welcoming message. Then there’s the handful of GOP Donald Trump critics who, as they hit the Biden administration, are also pinning some blame back on the former president, who negotiated a similar withdrawal timeline with the Taliban.”

Geoffrey Skelley: “Among non-incumbent candidates running for the House in 2022, the top fundraiser is a Democrat with no political experience running in a deep-red seat: Democrat Marcus Flowers has raised over $2 million in his bid to unseat controversial Republican Rep. Marjorie Taylor Greene in Georgia’s 14th Congressional District, which is a whopping 55 percentage points more Republican than the country as a whole.”

“Flowers’s windfall might seem strange given the long odds he — or any Democrat — faces in defeating Greene, but it also reflects a growing trend wherein candidates with little hope of winning still achieve eye-popping fundraising hauls. Based on political science research and an analysis of congressional fundraising, it’s clear that these candidates are the beneficiaries of two larger trends in American politics: a strong antipathy for the opposing party and the ease with which someone can now donate to a campaign on the internet.”

“Republican Larry Elder picked up an endorsement from Democrat Gloria Romero, former majority leader of the California State Senate from 2001 to 2008,” Politico  reports. Said Romero: “Our public schools need big change…I believe in charter schools and school choice; so does Larry Elder, but not Gavin Newsom.”

South Florida Sun-Sentinel: “Election season is far off, but Gov. Ron DeSantis has been in full-blown campaign mode, crisscrossing the state almost every day in the past week, touting monoclonal antibody treatments for people infected with COVID-19, defending his handling of the pandemic, and excoriating anyone who disagrees with his approach.”

Florida became the first state where the daily deaths in current wave of the pandemic have exceeded previous waves.

Ballotpedia finds that just 0.8% of absentee and mail-in ballots for the 2020 presidential election were rejected.

FLORIDA 20TH CD — Businesswoman Sheila Cherfilus-McCormick is up with two new TV ads ahead of the Nov. 2 Democratic primary. The spots do not appear to be available online, but according to descriptions from Florida Politics, they both play up her progressive bona fides, with the first touting her support for a pathway to citizenship for undocumented immigrants and the second coming out in favor of repealing the Hyde Amendment, which bars federal funds from being used to pay for abortions in nearly all instances.

The deep-pocketed Cherfilus-McCormick, who self-funded $2 million to her campaign in the last fundraising quarter, is reportedly spending $400,000 to air these commercials.

Miller-Meeks, meanwhile, won an open-seat race last year by just 6 votes over Democrat Rita Hart as Donald Trump was carrying southeastern Iowa’s 2nd District 51-47. While Hart has yet to announce whether she might seek a rematch, an unnamed former campaign aide tells the Quad-City Times that her old boss has “no intentions” of running, in the paper’s phrasing.

While Iowa’s 2nd has generally been competitive turf, the GOP’s complete control of state government gives legislators the chance to draw up friendlier lines for Miller-Meeks next year. Under state law, a nonpartisan agency proposes maps to the legislature, but while lawmakers always adopted them in prior decades when government control was divided, Republicans now can simply reject the agency’s proposals and implement their own gerrymanders.

GEORGIA U.S. SENATOR — Former NFL player Herschel Walker, whom Donald Trump has been trying to recruit for months, announced Wednesday that he would take on Democratic Sen. Raphael Warnock in Georgia. Walker won the 1982 Heisman Trophy while playing as a running back at the University of Georgia before he joined the Trump-owned New Jersey Generals in the ill-fated United States Football League, and his entrance gives the GOP a prominent candidate in what will be one of the most competitive Senate races in the country.

Not every Republican is delighted with Walker’s decision to run, though, as the first-time candidate has been on the receiving end of plenty of negative press ahead of his campaign launch. To begin with, the former Dallas Cowboys player and longtime Texas resident only relocated to Georgia this year, a decision he made months after Trump first touted him as a possible Warnock foe. Walker has also faced questions about his past, including allegations that he threatened to kill his ex-wife in 2005.

One of the Republicans who is reportedly most worried about what would happen if Walker is Team Red’s standard bearer next year is Senate Minority Leader Mitch McConnell, who has been looking for alternatives. At the moment, there are three other notable primary contenders: state Agriculture Commissioner Gary Black, businessman Kelvin King, and banking executive Latham Saddler.

Former Sen. Kelly Loeffler, who lost the January special election to Warnock, also hasn’t said no to another campaign, and the Atlanta Journal-Constitution speculates she’ll “wait a few months and gauge whether Walker soars on the campaign trail or falls flat.” The paper adds that, if Walker bombs out, and “the other GOP candidates don’t gain traction, she could play the role of the Republican savior by swooping in to qualify just before the March deadline.” Another former senator, David Perdue, announced earlier this year that he wouldn’t run, but he’s reportedly been reconsidering in recent weeks.

Two other Republicans, though, made it clear Wednesday that they’d be backing Walker rather than getting in themselves. Rep. Buddy Carter had previously made it clear he’d only run if the former running back didn’t, and he quickly and unsurprisingly endorsed Walker. There were also reports earlier this year that former Ambassador to Luxembourg Randy Evans could campaign, but he’s also all-in for Walker.

ALASKA GOVERNOR –– Recall Dunleavy announced Wednesday that it was ending its two-year campaign to recall Republican Gov. Mike Dunleavy, who is up for a full term in 2022. Meda DeWitt, who chaired the group, noted that the pandemic had dramatically slowed its efforts to collect the 71,000 valid signatures needed to force a special recall election. She said that, while Recall Dunleavy had obtained 62,000 petitions, it didn’t make sense to continue because the regular election is now so close and “we would have to conform to a new set of regulations.”

NEVADA U.S. SENATOR — So what point is there in putting out a poll like this? In a word, fundraising. A conservative outfit called Americas PAC has released a survey from Republican pollster VCreek/AMG that finds the GOP’s newly minted Senate candidate in Nevada, former state Attorney General Adam Laxalt, leading Democratic Sen. Catherine Cortez Masto by a 42-32 margin—utterly useless figures from any analytical perspective.

To put it most simply, there’s just no way that Cortez Masto, a scandal-free incumbent seeking re-election in a swing state, enjoys the support of just a third of all voters. No Democratic Senate candidate in state history has ever performed that poorly, in fact. It’d be one thing if a little-known challenger chalked up numbers like that in an early poll, but that’s pretty much the opposite of the scenario we have here. There’s just nothing this poll can tell us about next year’s election.

But what it can do is allow both Americas PAC and Laxalt to raise money by crowing that their side “is up 10 points in a must-win state!!!” Yeah, the old saw says you should “run like you’re down 10 points,” but donors are far more motivated to give to someone they perceive as a winner, and this poll allows Republicans to portray Laxalt as just that. For anyone looking for real insight into this race, though, you’ll have to wait until we get some polling that’s more closely tethered to reality.

ALABAMA GOVERNOR / U.S. SENATOR — This week, former Ambassador to Slovenia Lynda Blanchard did not rule out dropping out of next year’s open Senate race in order to instead challenge Gov. Kay Ivey in the GOP primary.

Blanchard argued that Alabama voters “want everything Trump. And they want a Trump governor, as well.” She continued, “So, I do have people reaching out to me. I’m praying about it, and you know, I’m in the race for U.S. Senate, and love the president and respect anything that he would like.” We can say for sure that, regardless of how Donald Trump feels about Ivey, his endorsement of Rep. Mo Brooks means he doesn’t want Blanchard in the Senate.

One person who sounded surprisingly enthusiastic about the idea of Blanchard taking on Ivey was state Auditor Jim Zeigler, who formed an executive committee for a possible gubernatorial run earlier this year but has blown past his self-imposed Aug. 21 timeline to make a decision. Zeigler also said he wanted Tim James, who unsuccessfully sought the GOP nod in 2010, to run, which is the first we’ve heard about the idea.

“I hope Tim James enters the race. He’ll reach some people I won’t,” Zeigler continued, adding, “I hope Lynda Blanchard and her millions of self-funded dollars enters the race.” The auditor argued that multiple foes attacking the governor would help in “setting up that runoff situation, Ivey versus Zeigler.”

The Alabama Daily News, meanwhile, released a survey from the GOP firm Cygnal this week that showed Ivey taking just 42%, which is below the majority she’d need to avoid a runoff, while Zeigler lagged far behind with 9%. The poll also tested James, whose father, Fob James, was elected governor as a Democrat in 1978 and as a Republican in 1994 but badly lost re-election four years later. The younger James, though, barely registered at third place with only 4%.