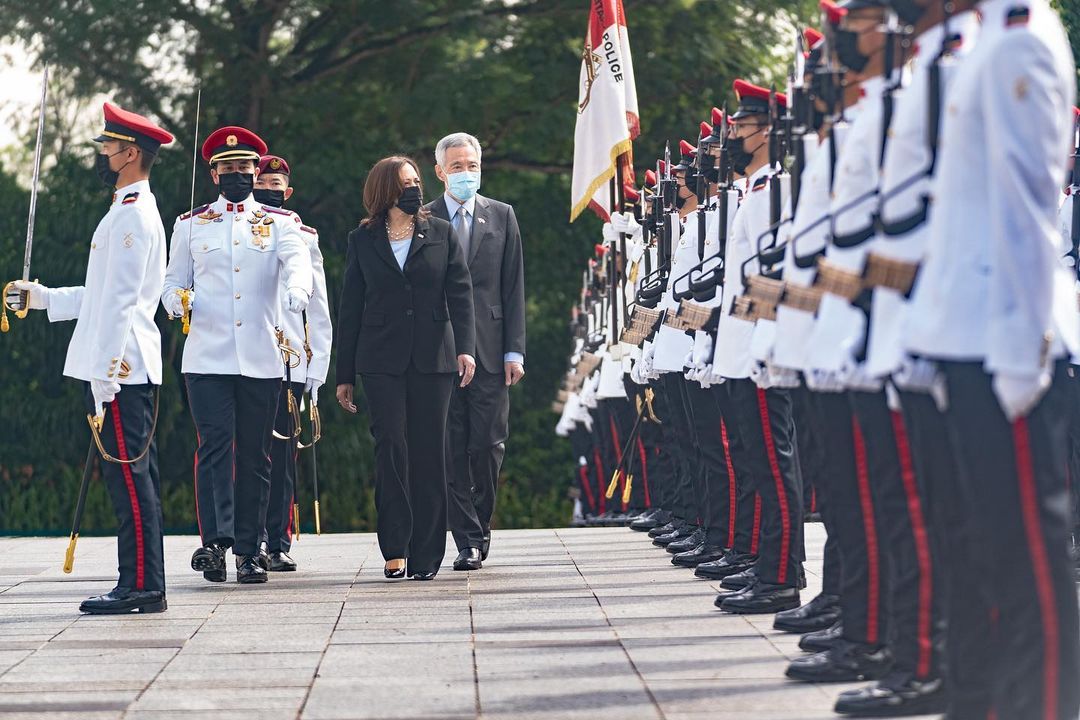 A new University of New Hampshire poll in New Hampshire gives President Joe Biden a 44% to 54% approval rating, down from 50% to 49% just last month.

A new Quinnipiac poll finds a plurality of Florida residents believe Gov. Ron DeSantis (R) is hurting efforts to slow the spread of Covid-19 in the state, 46% to 41%.

Greg Sargent: “Large majorities reject just about every aspect of DeSantis’s framing of this public debate.”

“Those votes represent only 5% of the 22 million ballots that have been mailed to every California voter.”

Washington Post: How Gavin Newsom could lose his job to a Republican in a recall.

Politico: “California’s surprisingly close gubernatorial recall election is laying bare just how hard it may be for the party to motivate its base without Trump as a foil. Even in this bastion of progressive politics, ominous signs for the Democratic Party are everywhere.”

“The lack of enthusiasm is so concerning to Democrats that Gavin Newsom, the state’s Democratic governor, has been furiously working to yoke his main Republican opponent, Larry Elder, to Trump.”

Peter Hamby: “I know far too many people in California, many of them millennials, who voted for Biden last year, but today either don’t know that there’s a recall, don’t know how the ballot works, or simply don’t care.”

COLORADO 8TH CD — Expect plenty of this over the next year: wrangling over congressional districts that don’t yet exist. This week, Democratic state Rep. Yadira Caraveo announced a bid for Colorado’s 8th Congressional District, even though its borders won’t be finalized until the end of the year. All we have to go on at the moment is a preliminary map from the state’s new redistricting commission that sketches out a Democratic-leaning 8th District in the suburbs to the north of Denver.

But the commission is in the midst of public hearings and has until Sept. 28 to settle on a plan, which in turn will go to the state Supreme Court for its own review, with a deadline of Dec. 15. Lots could therefore change between now and then, though if the current version of the 8th winds up in the final map, Caraveo could find herself in a good position: Her legislative district, which she first won in 2018, lies entirely inside the proposed congressional district.

A pediatrician who would be the first Latina to represent Colorado in Congress, Caraveo says she’s “confident” the new 8th will include her hometown of Thornton, though she says she’s unsure what her plans will be if it does not. (Members of the House do not have to live in the districts they represent.) But if she does wind up sticking with her campaign, the juicy temptation of an open seat guarantees that she’ll have company.

For starters, former state Rep. Joe Salazar, who used to represent Caraveo’s seat in the state House, says he, too, is considering a bid, though he’s also talked about a potential primary challenge to Democratic Sen. Michael Bennet. However, one Democrat who had been weighing a bid, state Sen. Faith Winter, has taken herself out of the running by endorsing Caraveo, citing the historic nature of her candidacy and her medical background.

Plenty of Republicans could also be in the mix, but it’s less clear who’s actually expressed interest versus who’s had their name bandied about by the proverbial Great Mentioner. That will change, though, as the 8th District gets closer to becoming reality.

GEORGIA U.S. SENATOR — Former NFL star Herschel Walker, who has been very squirrely about his political plans, filed paperwork to create a campaign committee with the FEC on Tuesday, and the Atlanta Journal-Constitution’s Greg Bluestein reports that a “formal announcement is expected within days.” Walker himself, however, still hasn’t commented publicly, and as of Tuesday afternoon, hadn’t said anything about his intentions on his Twitter account.

“He entered the race at the urging of former President Donald Trump, who said the one-time running back would be as ‘unstoppable’ as a candidate as he was on the field. He also boasts sky-high name recognition in Georgia and an outsider persona, traits he hopes will help him breeze to the GOP nomination.”

FLORIDA GOVERNOR / U.S. SENATOR — A new poll for the progressive group Future Majority finds close races in the marquee contests that’ll be on Florida’s ballot next year, but Republicans retain the edge in both. The survey, from Change Research, has Gov. Ron DeSantis ahead of his top Democratic opponents by almost identical margins, giving him a 49-45 lead on Rep. Charlie Crist and a similar 49-44 advantage over state Agriculture Secretary Nikki Fried. Meanwhile, Sen. Marco Rubio is up 47-44 on Democratic Rep. Val Demings. Polling in both races has been very limited, but these numbers are on the more optimistic side for Democrats compared to what little we’ve seen so far.

VIRGINIA GOVERNOR — In addition to its Florida poll (see just above), Future Majority released a companion survey from Change Research of this fall’s gubernatorial race in Virginia that finds Democrat Terry McAuliffe leading Republican Glenn Youngkin 47-44. Youngkin has never led in any publicly released poll of the contest.

Said Trump: “We won it twice. I’ve won it twice and now I have to win it again. I guess if we’re going to save the country, look… I’ll make a decision.”

He added: “It won’t be maybe for a little while. You know, a lot of people would like to see a decision immediately, but perhaps there’s also a big group, including maybe myself, that would like to see it after the midterms.”

“The top Republican in the Pennsylvania State Senate promised this week to carry out a broad review of the 2020 election results, a move that comes as GOP lawmakers continue to sow doubts about the contest’s legitimacy by pushing to re-examine votes in battleground states like Arizona,” the New York Times reports.

Former Texas GOP Chair and current candidate for governor Allen West (R) is demanding an apology after his wife was arrested for allegedly driving while intoxicated, Fox Dallas reports.

“The retired Army lieutenant colonel produced photos of a receipt that he said proves his wife did not order any alcoholic drinks with her meal. He said she only had two Excedrin.”

Politico: “Illinois lawmakers are on the verge of rolling out a new congressional map that will very likely gut Kinzinger’s exurban Chicago seat, leaving him with just a few bleak options for remaining in office next year.”

“The elimination of his district would force the veteran Republican congressman to choose between running in unfamiliar territory, possibly against another incumbent, or making a long shot run for governor or Senate in a blue state — and that assumes Kinzinger could prevail in a GOP primary after spending the last year criticizing a former president who remains beloved by the base.”

TEXAS 23RD CD — Businessman Raul Reyes, who narrowly lost last year’s Republican primary in Texas’ 23rd Congressional District, says he’s considering a rematch with the ultimate winner of that race, Rep. Tony Gonzales. In a statement, Reyes complained about Gonzales’ various apostasies, including his vote for a commission to investigate the Jan. 6 insurrection at the Capitol, and charged that the congressman’s “number one priority is to help illegal aliens come into the country.”

Gonzales had Donald Trump’s endorsement and was the favorite of the party establishment, but the little-regarded Reyes made it a race in part thanks to the support of Ted Cruz. Gonzalez wound up winning by just 45 votes in a runoff after leading 28-23 in the first round of voting (strangely, Reyes claimed in his press release that he “came within seven votes” of victory, even though official results confirm the 45-vote margin). But because Reyes pursued a recount, the result wasn’t final until five weeks later, hampering Gonzales’ finances.

Despite the prolonged nomination battle, though, Gonzales wound up prevailing over Democrat Gina Ortiz Jones 51-47, aided by a sizable swing to the right among Latino voters. One notable Democrat, Marine veteran John Lira, has announced a bid for this sprawling rural district that stretches along the Mexico border from San Antonio west to the El Paso area, though Republican state lawmakers are apt to try to make it redder next year.

ILLINOIS 13TH CD — Former Biden administration official Nikki Budzinski, who’d reportedly been preparing a run, launched a campaign against Republican Rep. Rodney Davis on Tuesday. Budzinski is politically well-connected: She recently stepped down as chief of staff at the Office of Management and Budget and prior to that served as a top adviser to Gov. J.B. Pritzker. She also has a long history in the labor movement and managed labor outreach for Hillary Clinton’s 2016 presidential campaign.

Budzinski joins a primary field that already includes financial planner David Palmer. The biggest question, though, is how Democrats in the legislature will redraw the swingy 13th District, which could be made decidedly bluer.